Although I am Australian through and through, born and bred in Fremantle, Western Australia where I have lived almost my entire life, I have never been a fan of Australian-made movies. In my opinion, most of the early screen efforts painted Australian men as stereotypes; loud, foul-mouthed, country bumpkins, forever running about with a beer in their hands and calling each other ‘cobber’. And Aussie women were generally portrayed as all of the above – in a dress.

I am primarily referring to seventies rubbish such as The Adventures of Barry McKenzie (1972),  Alvin Purple (1973), The Club (1975), Don’s Party (1976) and The Odd Angry Shot (1979), and many, many others, that turned me off Aussie films at a relatively early age. Not that I am condemning all films made in my homeland. It is just that finding a good one amongst the junk became a bit tiresome, so I ‘tuned out’ for a couple of decades. The first time I ever listed my favorite 100 movies, only one Australian production got a mention. I refer to the Jack Thompson classic (ironically, from 1975) titled Sunday Too Far Away. Since then there have been a few fine Aussie pictures and, of course, numerous wonderful Aussie actors who have carved out great careers, mostly overseas. Performers of the highest quality such as Geoffrey Rush, Cate Blanchett, Nicole Kidman, Hugh Jackman and the late Heath Ledger are just a few of the recent crop to make it big overseas, but there have been scores more. I held the late Rod Taylor in high esteem, but that is another story.

Queenslander Michael Caton is not generally listed among this country’s top players. But he should be. He makes his movies at home where he has become, if not exactly a household name, most certainly a household face. My generation, the ‘baby-boomers’, first saw him in the popular seventies TV series (set in World War Two Melbourne) – The Sullivans – in which he played Uncle Harry Sullivan. In the eighties he starred as Paddy Malone in another successful series called Five Mile Creek. He was terrific as the iconic Aussie battler Darryl Kerrigan in a popular 1997 comedy titled The Castle, and from 2008 to 2013 he visited most Australian lounge-rooms as Ted Taylor in the series Packed to the Rafters. In my opinion though, his superb performance as Rex McRae in 2015’s Last Cab to Darwin is his crowning achievement.

Caton is excellent as Rex, a cab driver in Broken Hill, New South Wales in 1996. He is in his seventies, involved with an Aboriginal woman across the street named Polly (played by Ningali Lawford-Wolf), when he learns he has inoperable cancer and is given just a few months to live. By chance he hears of the new euthanasia laws in the Northern Territory and decides to drive the 3,000 plus kilometers to Darwin. He wants to die quickly and with dignity, rather than linger in agony. The only place in Australia he can legally do this is in Darwin in the NT. This heart-warming movie focuses on his journey to the Top End and the people he encounters along the way.

The synopsis, at first glance, suggests the picture is most likely to be an exercise in morbidity, but first glances can be deceiving. As Caton himself said of it, ‘It’s not the ending, it’s the journey.’ The movie is based on Reg Cribb’s successful stage play, which in turn is based on actual events. Back in the nineties a terminally ill cab driver named Max Bell took the same trip for the same reason. It was August 1996 when Max made the decision to take advantage of the freshly minted Rights of the Terminally Ill Act 1995 in the Northern Territory. The Act had come into effect in July 1996. 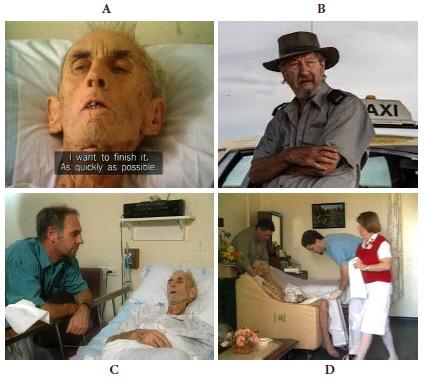 The leading proponent of euthanasia in Australia at that time was Dr Philip Nitschke. He was prepared to help in the voluntary euthanasia process, but there were a couple of road blocks placed in front of him. The law required him to first find a resident Northern Territory specialist in Bell’s illness, someone who would confirm in writing the man’s terminal diagnosis. But that was not the only condition. Nitschke must also dig up a psychiatrist who would be prepared to confirm in writing that Max was ‘not suffering a treatable clinical depression’. In other words, the dying man had to acquire written proof that his desire to be euthanized was not some kind of treatable death wish!

It quickly became apparent that no doctor or psychiatrist in Darwin was willing to alienate the government, the Australian Medical Association (AMA) or the church, by signing something that would enable Max Bell to die in any way other than naturally. According to Dr Nitschke, Max was ‘disgusted and angry at what he saw as the cowardice of the doctors.’ In fairness, however, these men were understandably concerned that they might be criminally charged later if they helped him. Legal challenges to the act were yet to be announced. So, Max returned home to Broken Hill where he died three weeks later – ‘precisely in the way he most dreaded’, said Nitschke, ‘slowly, and with the process out of his control.’

Then, in September 1996, a doctor was found who was willing to sign (albeit anonymously) a confirmation for another terminally ill man, Bob Dent. Soon after that a Sydney psychiatrist named Dr John Ellard flew to Darwin and confirmed that Dent was ‘not suffering from a treatable clinical depression. So, a month or so after Max Bell had returned home to die, the first legal euthanasia death under the Act took place. Not that it benefited Max in any way at all. He had already died a miserable, slow death, courtesy of the powerful opponents of euthanasia legislation in Australia.

On You Tube there is a five minute clip of Max Bell’s final days in hospital. It is horrendous and terribly sad. Because of the publicity surrounding his situation, there was absolutely no chance that any physician in that hospital was going to do anything to induce death as happens in so many cases. Any such ‘helping hand’ would have been meticulously investigated, so poor Max had to endure his hideous condition right to the very end.

In September 1996 the opposition to voluntary euthanasia, mainly Catholics, introduced a bill that was supported by both the Liberal and Labor leaders. With no-one to hinder the thing, it quickly passed through both the Upper and Lower Houses of Parliament. It overturned the Northern Territory Act and, just like that, The Rights of the Terminally Ill Act ceased to exist. If any one of the six more independent States of Australia had introduced a law to legalize voluntary euthanasia, the federal parliament could not have stepped in. But none did. Just four people had been able to take advantage of the ACT before it was overturned.

Obviously, I am in favor of voluntary euthanasia. Whether or not I would personally utilize it, given the chance, I do not know. But, like a great many Australians, I would at least prefer to make that choice for myself. There is something particularly obscene about politicians deciding matters of life and death for the rest of us. With one stroke of a pen they can order us to march off to war and legally kill total strangers. And if their own beliefs happen to include a hereafter with heaven and hell and all that jazz, they (with the help of the Church) can forbid us to determine our own fate in order to ‘save our souls’, or whatever other mumbo-jumbo reason they dream up. People are entitled to believe in whatever they choose to, but that does not entitle them to foist those beliefs on others. Since when did politicians, the AMA and the church collectively acquire the monopoly on wisdom?

Last Cab to Darwin is a fine movie. It is beautifully acted and scripted. And it makes us think. Not just about voluntary euthanasia, but about the racism that still exists in parts of Australia as well. A kind of ‘semi-voluntary apartheid’ is evident in some outback towns it touches. But both these important issues aside, it is Mr. Caton’s performance that grabs us. It is his picture all the way – lock, stock and barrel.