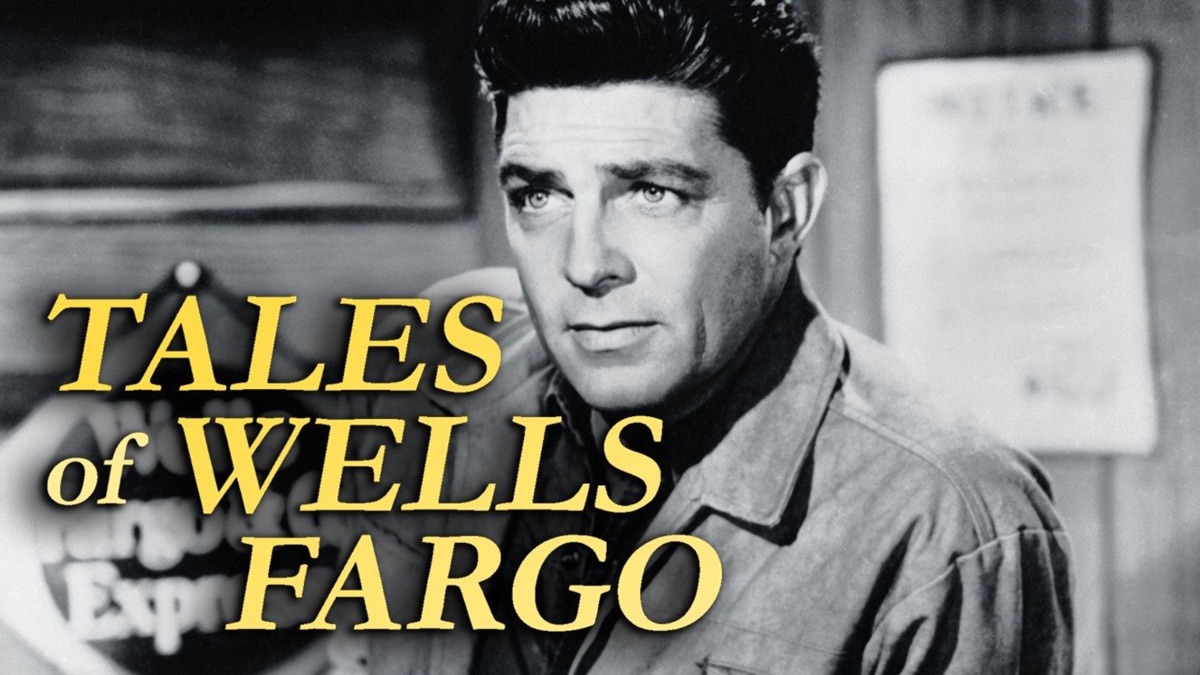 This long-running series proved to be very popular (certainly in this writer’s household), due in the main to its star Dale Robertson who positively oozed integrity as Special Wells Fargo Agent Jim Hardie. The real Wells Fargo actually employed special agents who carried badges and were given some law enforcement powers. They operated mostly on stage lines and aboard trains. The train used in this series was the same one shown in the Casey Jones series that also started in 1957. Other actors were employed at various times in the show, but none appeared more often than Art Felix (35 episodes) and veteran character actor William Demarest (25 episodes). Robertson, of course, starred in all 201 and clearly carried the series for its duration. The horse he rode throughout was named Jubilee and was his own.

Tales of Wells Fargo ran on NBC in America and was aired in a half-hour, black and white format for every episode until the final season, at which time it was expanded to an hour and shot in colour for the first time. For its first two seasons it ranked in the Top Ten in the Nielsen Ratings. In season one it ranked at # 3 and the following season ranked at # 7. Such was its popularity it even resulted in appearing in a series of Dell Comic Books and Little Golden Books.

A veteran of the Second World War, Dale Robertson was extremely fortunate to survive the conflict. A Second Lieutenant in the 777th Tank Battalion in North Africa, he was standing in the hatch when his tank was hit by enemy fire. His entire crew were killed but he was blown clear and, although wounded, survived. After the war he had a photograph taken of himself for his mother and it was discovered by a Hollywood scout in the photographer’s shop window. Robertson never had an acting lesson in his life yet he was considerably better at his craft than the mostly B features he was placed in. He passed away at 89 in 2013. 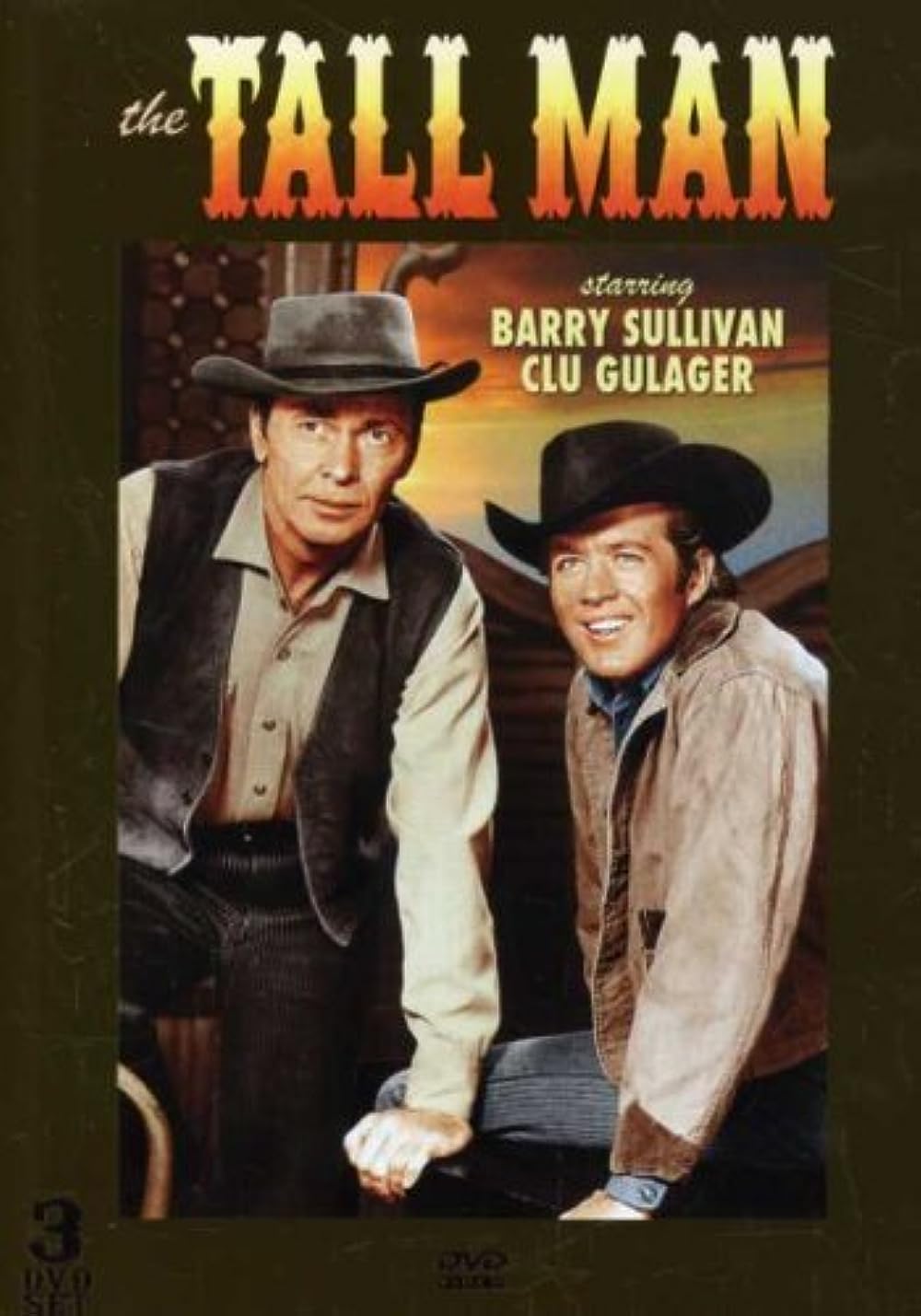 Lovers of the history of the American West will almost certainly hate this series. Sheriff Pat Garrett, (played by the grossly under-rated Barry Sullivan), and the outlaw known as Billy the Kid (portrayed here by thirty-two year old Clu Gulager) are the central figures in the series. And therein lies the first clue as to why this series was so disliked by aficionados of the real Wild West. As any historian of the era knows, in real life Billy was as dead as Julius Caesar at the ripe old age of twenty-one, so why have him played by an actor clearly in his thirties? As early as the first episode we learn that a crooked saloon owner has hired Billy to kill Pat, unaware that Garrett and the Kid have become friends! Really? There is no evidence that supports any kind of friendship between Pat Garrett and Billy the Kid. None. Incidentally, the title refers to Garrett who was well over six feet tall. When he was shot dead in 1908, the finished coffins in Las Cruces, New Mexico were not long enough to take his body, so a specially built one was shipped in from El Paso. This highly fictionalised series paints Billy the Kid as a humane, decent young man. History would beg to differ. In reality he was a cold-blooded killer who murdered two deputies as he escaped from jail thirteen days after being sentenced to hang for murders he had committed during and after the Lincoln County War. Taking full advantage of dramatic license, the producers of this series even tossed Doc Holliday into one episode of The Tall Man. It is known that he spent some time in New Mexico but there is no mention anywhere of him ever meeting up with Billy the Kid. One of the few undisputed facts about Garrett and Billy is that, one evening in 1881, Pat gunned down his so-called ‘friend’ from ambush in Fort Sumner, New Mexico. The Tall Man series concludes before that moment is reached, however. The series appears to have plucked the real life personages of Garrett, the Kid, Holliday and others from the pages of history and thrown them into a number of fictional situations. Just when we began to think the networks had exhausted ideas for western series, along came yet another with a ‘difference’. Created by Harry Julian Fink, the creator of Dirty Harry, the series titled Tate was presented on NBC in 1960. The difference? Tate was a gunfighter with just one arm, having lost the use of the other during the American Civil War Battle of Vicksburg. His useless arm is covered throughout the series in black leather and a glove and supported by a sling! Tate roams around the Old West as a bounty hunter/hired gun. Unlike the real men of the 19th century with such occupations, he is a discriminating gentleman, known to switch sides should he discover that his employers have been less than truthful about their motives for hiring his services. Although he is lightning fast on the draw he also totes a shotgun, in his words, ‘to help even the odds’. As if he ever needed to. Tate was the first physically handicapped lead character in television history, thereby paving the way for Ironside and Longstreet, to name but two in future years.

The man chosen to portray the title character was David McLean, an individual already well-known to television viewers as ‘The Marlboro Man’, the focus of one of the most famous campaigns in advertising history. A lifelong smoker, McLean started suffering from emphysema in 1985 and had a tumour removed from a lung in 1994. However, David was a libertarian who believed that cigarette-smoking was part of ‘freedom of choice’, so he steadfastly refused to sue the Philip Morris Company, the manufacturer of Marlboro cigarettes, although he did request that the company limit its advertising. After his death at seventy-three in October 1995, his widow and son filed suit against Philip Morris, claiming the firm encouraged and even required cigarette smoking that led to McLean’s lung cancer. They lost the case and were ordered to pay for the costs of the lawsuit.