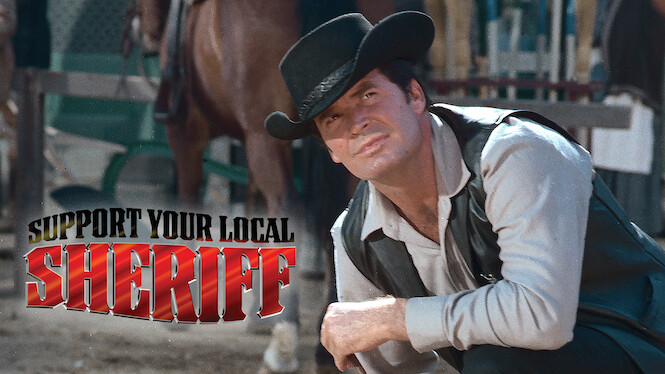 In the opinion of this writer, the screenplay for Support Your Local Sheriff is the funniest ever written for a western. Given that it was the brainchild of William Bowers, the quality of his writing should not come as a surprise for many readers, for the man also wrote The Godfather Pt II (1974), The Gunfighter (1950) and The Sheepman (1958). In fact, he was Oscar-nominated (albeit unsuccessfully) for both of the 1950s films. His penchant for putting humour on paper, however, does come as somewhat of a surprise.

The performance of the star of Support Your Local Sheriff, James Garner, is outstanding, as are the efforts of Bruce Dern, Jack Elam, Joan Hackett and Harry Morgan. The picture, nevertheless, purloined ideas (with minor variations) from other films. The exhibition of marksmanship from Jason McCullough (Garner), in which he fired a shot through the hole in a washer, then ‘proved’ it was no fluke by placing masking tape over the hole and repeating the feat, was stolen from the Jimmy Stewart western Winchester ’73 (1950). The 1969 movie is, of course, set in the Old West of the 1880s which presents us with an anachronism. Masking tape was not invented until 1925. Oops! Curiously, skilled marksman Jason can twice fire a bullet through the hole in a washer, yet is unable to hit anyone in the final shoot-out. It is Prudy who shoots the two Danby riders.

The opening scene in which the townsfolk attending a burial service suddenly notice gold in the grave and leap into it to stake their claims, is similar to the scene in the musical Paint Your Wagon, which was also released in 1969. Whether this film copied the musical or vice versa is debatable. When the patriarch of the Danby clan (played by Walter Brennan) hands his dentures to his son for safe-keeping, we are reminded of the same actor handing over his dentures to an Indian in Red River (1948). Brennan also portrayed the head of another clan (the Clantons) in My Darling Clementine (1946).

There are a couple of pretty loose editing errors in Support Your Local Sheriff. The most obvious one occurs when the Danbys (numbering fourteen) ride into town. Two of the riders are sent into the jail to retrieve Joe (Dern), yet thirteen are clearly seen waiting out in the street. During the gunfight two are killed by Prudy, yet at the fight’s conclusion all thirteen line up at the cannon and are arrested by the sheriff. Indeed, the two dead men can still be seen in the background, lying in the street where they fell. 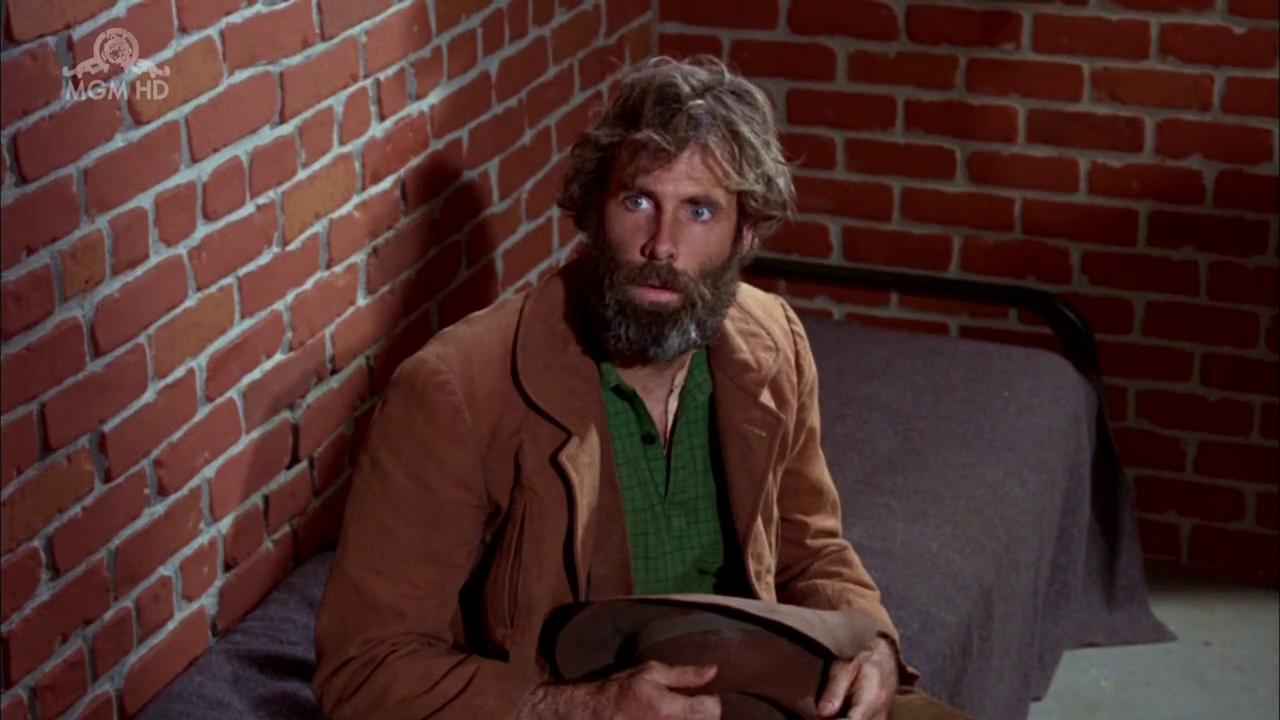 In one scene McCullough arrives at the jail to see for himself that the bars for the cells have not yet arrived. He conveniently finds a can of red paint and proceeds to sprinkle drops of red paint around a chalk line he has drawn across the door-line of each cell. ‘That ought to do it until the bars arrive’, he says. When Joe Danby is brought in, he takes one look at the red stuff on the floor and is instantly convinced it is blood, even though the can of paint has not been removed! The fact that nothing else in the jailhouse or sheriff’s office has been painted red makes one wonder what the can of red was doing there in the first place. 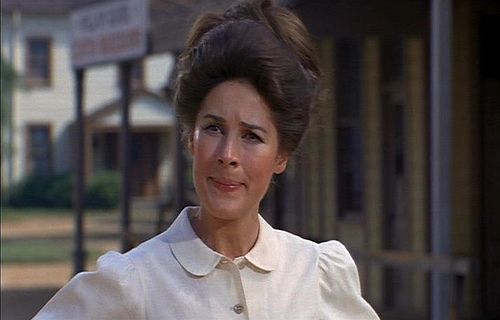 The town brothel is known as ‘Madame Orr’s House’. That could simply be a play on words, or it may have been a subtle inside dig at William T. Orr, the Warner Brothers executive who produced the 1957 Maverick series that starred Garner. Orr and Garner had a contentious relationship due to their conflicts over unfair contracts. In 1960 Garner sued the studio after he was suspended due to the writers’ strike of that year. Warners claimed they had no scripts for the series so the suspension (without pay), they argued, was warranted. However, during testimony it came to light that the studio had secretly obtained over a hundred TV scripts during the strike! The Los Angeles Supreme Court ruled in Garner’s favour and he was released from his contract with Warners and the series. 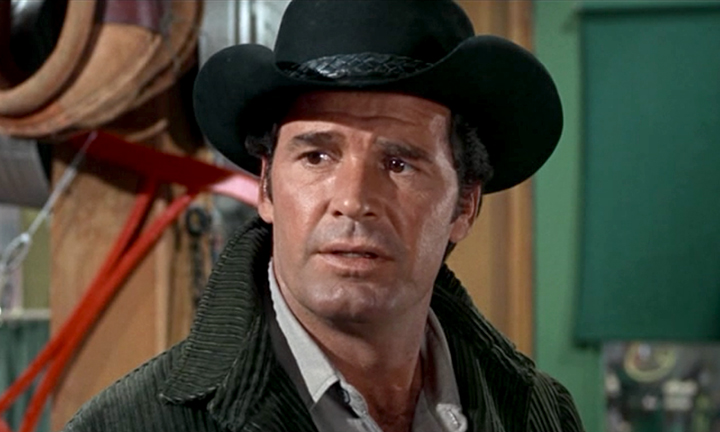 Furthermore, his contract for the series included a salary plus a percentage of the profits. However, production companies were deliberately paid less than the cost of production, hence there were no profits to share in. When the production company had 100 episodes in the can they could put them out for syndication where every dollar they received was almost pure profit. Creative accounting at its most productive. This probably led to him leaving the show – and who could really blame him?

New Yorker Joan Hackett was an interesting actress whom several directors found difficult to work with. She was a strong-minded individualist who spurned conventional leading lady approaches to her roles; an attitude that certainly made her unique. Attractive in an off-beat sort of way, she turned down a contract with 2oth Century Fox, opting instead to enrol in Lee Strasberg’s Actors Studio. In 1966 she wed Richard Mulligan whom fans of the TV comedy Soap will recall played Burt Campbell from 1977 until 1981. The couple divorced after seven years. Diagnosed with ovarian cancer, Joan checked herself out of hospital, just a few weeks prior to her death, in order to host the wedding of Carrie Fisher and Paul Simon at her Beverly Hills home. She lost her battle with cancer on October 8, 1983. She was only forty-nine.

A native of Detroit, Michigan, character actor Harry Morgan played Mayor Ollie Perkins here, the father of Prudy Perkins. In all he appeared in over a hundred films and half as many TV shows. Of course, he will always be Colonel Sherman T. Potter on M.A.S.H., but he was more like a father to scores of movie people down the decades. Loretta Swit (Margaret ‘Hot Lips’ Houlihan in M.A.S.H) was a nearby neighbour who admired him immensely. Morgan was regarded as one of the busiest actors on television. He had continuing roles in at least ten series which, combined with numerous guest appearances, amounted to hundreds of episodes. When asked what his favourite movie was, he replied The Ox-Bow Incident (1942). He played Art Croft in it, billed as Henry Morgan.