Of all the movie stars that have come and gone down the decades, none strove so hard, or for so long, as Joan Crawford did, to get to the top of the pile and remain there. In effect, there was almost nothing she would not do to become and stay a star. She was born in 1905 with the unfortunate name of Lucille LeSueur, but MGM would later change that to Joan Crawford, a name she despised because it was ‘too plain’. MGM thought her real name sounded too much like ‘sewer’, hence the change.

At the age of eleven Lucille was raped by one of her step-fathers (she would have three of them). Two years later she was being regularly assaulted by her older brother and by her late teens she had already been arrested by Chicago police on prostitution charges while working at a mob speak-easy. Two highly explicit pornographic movies, Velvet Lips and The Casting Couch soon followed starring a very energetic Lucille. Years later, MGM executives would deny they existed, but would quietly spend thousands tracking down and buying every copy they could find. Even so, copies are still around today in private collections.

It was during those early, pre-star, days that the freckled Lucille (she was smothered in freckles from head to toe) contracted VD for the first time and underwent more than one abortion. ‘I happen to know’, said Veronica Lake, ‘that Joan Crawford and Tallulah Bankhead couldn’t have babies because of the illegal abortions performed on them.’ In 2002, a photograph surfaced that clearly showed a naked Joan in the arms of an equally naked woman, suggesting that her life-time denial of ever having female lovers may not have been entirely true. There was never any doubt about her having male lovers, however.

Once she made it to Hollywood, an MGM contract and a name change, Joan quickly settled in to seducing men of all ages. One of the youngest was 17 year-old Jackie Cooper who she invited around to her home a number of times over a few months until she tired of him. ‘Put it all out of your mind’, she coldly informed him the day she ended their trysts. ‘It never happened.’ Bette Davis, with whom she would maintain a life-long feud, said of her: ‘She slept with every male star at MGM except Lassie.’ (For those who don’t know, Lassie was a boy dog, not a girl). 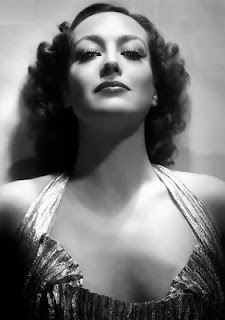 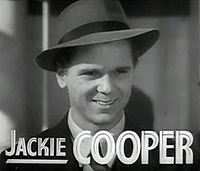 L B Mayer, head of MGM, knew her well. ‘I have great admiration for her as an actress, but she’s a slut’, he said. ‘She is what she is, a cheap flapper who likes to get laid.’ She also swore like a sailor, which turned off some of the big stars such as Henry Fonda and John Wayne. Her usual plan of attack was to arrive at a party unescorted, then select a man from the throng and ask him to drive her home later. Few refused, for her reputation was well and truly known. She would regularly undress in front of studio staff, both men and women, whilst casually discussing movie business.

On her death in 1977 it was discovered that she had disinherited both her adopted children, Christina and Christopher. ‘For reasons well known to them both’, she wrote. These days it is commonplace for actors to adopt children from around the world, but it was Crawford who first did so in Hollywood, and her reasons were all connected to her ‘image’, accompanied by a sizeable chunk of jealousy. When her rival Bette Davis gave birth in 1947 and attracted all the media’s attention, Crawford quickly arranged through her mob connections, for Meyer Lansky to ‘fix’ it so she could adopt two babies through his black market contacts. Joan was unmarried at the time, so money changed hands.

Within 17 months of her demise she became the subject of a book by daughter Christina that portrayed her as a child abuser and a truly horrible mother. The book, Mommie Dearest, sold well and was made into a movie starring Faye Dunaway as Joan. Crawford’s friends insist that it was Christina’s way of exacting revenge for being cut out of her mother’s will, but many others who knew Crawford are equally adamant that it hits close to the mark.

Joan’s attitude to the industry and her career was summed up in an interview: ‘If you’re going to be a star, you have to look like a star, and I never go out unless I look like Joan Crawford the movie star’, she explained. ‘If you want to see the girl next door, go next door.’