One of Hollywood’s truly tragic stories was that of Barbara Payton, a pretty and talented actress who experienced both the highs and lows of life in Tinsel Town. Just sixteen years after starring alongside Gregory Peck in the western feature Only the Valiant (1951) she was dead. Her body was so ravaged by hard living and liver failure by then it was all but unrecognisable, yet she was only 39 years old.

A run-down of Barbara’s private life reads like the script of a ‘B’ movie. She was born in 1927 in Cloquet, Minnesota (Jessica Lange’s home town) and moved with her folks to Texas when she was eleven. Four years later the father of a school friend raped her in a dry bathtub while the man’s family celebrated his surprise birthday party downstairs. That same year she eloped with her high school boyfriend, but her parents quickly had the marriage annulled. At seventeen she married an Air Force captain and moved to California where she took up modelling. The couple separated two years later, but not before Barbara gave birth to a son in 1947. Gregory Peck and Barbara in Only the Valiant

Universal-International put her under contract in 1948, but dropped her in 1949 after learning of her six-month illicit affair with the very married Bob Hope. Hope had put her up in a luxurious apartment, but the relationship disintegrated when she began demanding money from him as well. Over the following 12 months she embarked upon affairs with attorney Greg Bautzer, gangster Mickey Cohen, actors John Ireland, Gregory Peck, George Raft, a couple of Sunset Strip playboys, and many, many others.

In 1950, Warner Brothers and Cagney Productions suddenly contracted her at $5,000 a week. Barbara had met Jimmy Cagney a couple of years earlier, but the rumour mill contended she slept with his brother William to get the contract, and not with Jimmy. Around this time her divorce came through from her Air Force captain. She celebrated her freedom by becoming engaged to actor Franchot Tone. Then she nailed both her co-stars when she made Dallas opposite Gary Cooper and Steve Cochran. Barbara liked men and she liked sex. She made Trapped with Lloyd Bridges in 1949, a pretty solid film noir, and had a brief fling with him, referring to the father of Jeff and Beau as ‘a champion ruiner of girls in Hollywood’. Lloyd had a heavy rep. 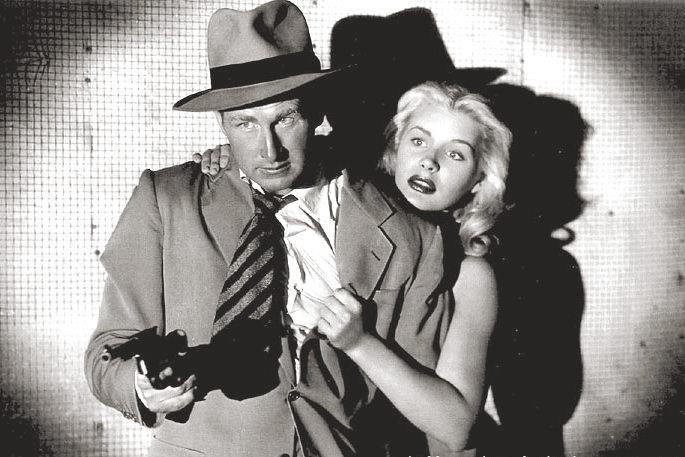 with Lloyd Bridges in Trapped

In October 1950 her ‘friend’ Stanley Adams, a suspected murderer and dope addict, was charged with perjury. Barbara bravely, but ill-advisedly, went to bat for him and Warners placed her on temporary suspension after she testified for the defence and earned herself and the studio a lot of adverse publicity. One year later Tone allegedly caught her en flagrante with the married Guy Madison at her apartment. Before the feathers had stopped flying she told reporters she was ditching Tone for her newest lover – not Madison, but B-movie tough guy Tom Neal! 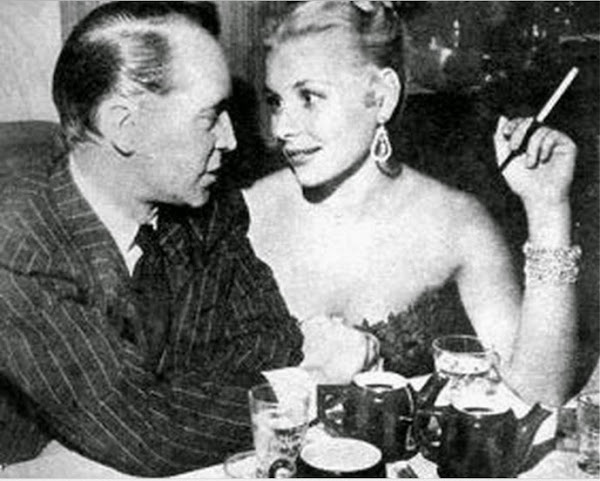 In September 1951, Neal attacked Tone outside Barbara’s apartment and beat him so viciously that the matinee idol required extensive plastic surgery to his damaged face. On September 28, much to the tabloids’ delight, Tone and Payton were wed anyway. Just seven weeks later the marriage was in tatters as scatter-brained Barbara went back to Neal, although not directly. Along the way she paused to dally with George Sanders’ alcoholic brother Tom Conway. She and Conway were shooting the woeful Bride of the Gorilla together. 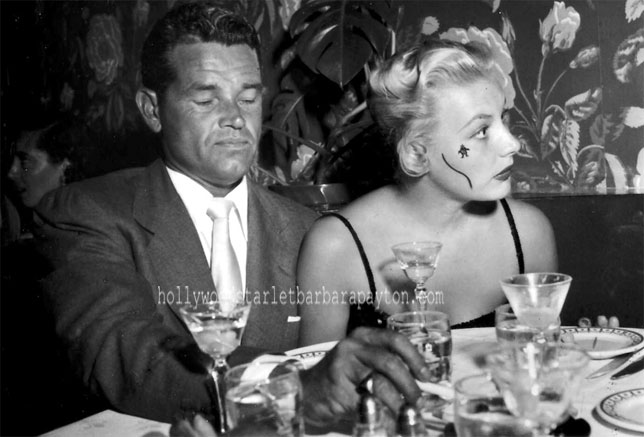 In December that same year she and Neal headed off to New York City to promote a film, but Barbara quickly gave him the slip and spent the evening in a hotel suite with six drunken cowboys, goading each of them into fist-fighting one another for her favours. Before the month was out she astounded almost everybody by leaving Neal and returning to Tone again! March 1952 found her back in New York City, this time with her husband instead of Neal. The whole roller-coaster ride must have been beginning to affect her, for she accidentally overdosed on sleeping pills and almost died. Following her recovery two months later she suddenly divorced Tone. She informed the newspapers that he had threatened to kill both her and her on-again, off-again lover Neal. No wonder. Incredibly, eight years later, Tone would again ask her to marry him. This time she turned him down. And he was far from happy about it. 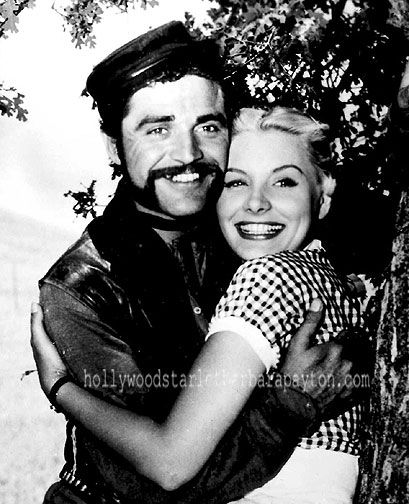 In a fit of pique he hired private detectives to photograph her having sex with several men, and then mailed copies of those pictures to all the Hollywood studios in an attempt to ruin her career. He need not have bothered. Barbara had already done that herself. When she publicly flaunted her inter-racial affair with Woody Strode it finished her anyway. For those readers unfamiliar with Strode’s name, he is probably best-remembered today for playing the Nubian slave who spares the life of Spartacus (Kirk Douglas) in the arena at the expense of his own in Kubrick’s 1960 epic of the same name. July 1952 found Barbara still impersonating a human ping pong ball as she bounced back  – you guessed it – to the ever unreliable Mr Neal. However, while on a trip to London, he caught her in bed with a wealthy night club owner named Siegi Sessler and again the relationship almost foundered. Not quite. Not yet. The not so happy couple found time to feature together in a ‘B’ grade movie, The Great Jesse James Raid, before finally going their separate ways in 1953. This was the only time they appeared on the screen together.

Throughout 1954 Barbara surrendered to her sexually compulsive nature and gained a reputation for trawling Hollywood cocktail lounges in search of men. The striking blonde had little trouble finding them. One of her conquests was notorious playboy Serge Rubinstein. His luck ran out soon afterwards when he was strangled to death in his New York Apartment by an unknown assailant. By 1955, her acting career all but over, Payton narrowly avoided going to jail for writing bad cheques (just to buy her groceries).

She took off for Mexico where she married again, this particular union lasting three years. Between 1959 and 1962 she descended into alcoholism and prostitution in a big way. During this period, in February 1962, she propositioned an undercover cop in a bar on Sunset Boulevard and was arrested. Five months later she reported to police that a teenaged gang had tried to pack rape her in a motel. The next morning, battered and bruised, she was discovered on a bus stop bench, clad only in a swimsuit and overcoat and quite drunk. She was arrested for public drunkenness. Just one week after the public drunkenness incident she was again arrested, this time for being drunk and disorderly while noisily entertaining two men in a friend’s apartment. By then she was turning tricks regularly and, allegedly, starring in a pornographic movie simply to make ends meet. Her nights were still being spent in bars where she solicited openly. Actor Dennis Hopper unashamedly claimed he was one of her customers in the back booth of a bar around this time.

By the spring of 1963 the once beautiful, popular blonde star was in an utterly hopeless state. Suffering from depression, mental illness, liver problems, alcoholism and drug addiction, the former screen beauty was selling her ravaged body most nights. One such encounter saw her knifed by a client. The wound required 38 stitches and she almost died. In October she was found guilty of prostitution and fined $150. It was also around this time that she contacted writer John Gilmore who was working on a film script about the ‘Black Dahlia’ murder. She told him of an alleged ‘kinky’ meeting between her ex-husband Tone and Elizabeth Short, the doomed ‘Black Dahlia’ herself. The meeting, Payton claimed, took place in January 1947, shortly before the lady’s body was found in two pieces on South Norton Avenue, Los Angeles. If she was implying that Tone had something to do with Hollywood’s most famous unsolved murder, she provided no other evidence to support such a monstrous claim. Since then, incidentally, there have been a half dozen people accused by various authors of killing the hapless Miss Short, among them none other than actor Orson Welles! Even his most ardent enemies would find that one difficult to swallow. It now appears that a police officer may have been the culprit all along. But that’s another story. 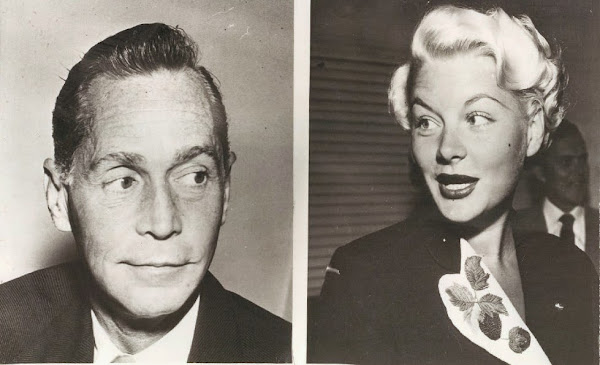 Tone and Barbara – the years are taking their toll Things continued to go from bad to worse for Barbara. In 1964, the girl who once wore $10,000 mink coats and gave away $1,000 garments to her friends and family was charged with shoplifting some clothing! Less than twelve months later she was arrested for possession of heroin and syringes. The charges were dropped but few doubted she was mainlining. A year later her ex-lover Neal was convicted of killing his third wife and was sentenced to six years behind bars. Barbara, apparently, attended the proceedings as an interested spectator. Two years later she was dead at 39 from heart and liver failure. Tone died from lung cancer less than eighteen months after her. Neal collapsed and died shortly after his release from prison in 1972. I doubt if many movie fans today have even heard of Barbara Payton, yet I feel her story is one of the most poignant in Hollywood’s long history of ruined lives. She appears to have brought much of her woes on herself, but maybe she was not very bright, even grossly naive? Surely, a reasonably intelligent person would not make the mistakes she made. Not so many anyway, yet underneath she was kind and generous. Most people who knew her liked her. Perhaps, her journal explained a lot about her approach to life. Her best friend found it and discovered a plaintive cry to her cold, uncaring father, repeated over and over within it. ‘Daddy, please love me!’ How sad.