Lucille Ball’s Mame was one of the worst ‘flops’ in motion picture history. Other bad movies lost far more money, but few were brought undone simply because their leading performer was so woefully miscast. The picture is, of course, a musical remake of Rosalind Russell’s Auntie Mame (1958), for which Ms. Russell was unsuccessfully nominated for an Oscar. It appears that after watching Russell in the non-musical Auntie Mame, Lucille arrived at the conclusion that she had based her characterization on Lucy’s character in her hit TV series, I Love Lucy. This belief inspired Ms. Ball to chase the role in the up-coming musical version, titled Mame. She had also expressed her deep concern over the ‘gritty’ path movies had been taking recently (Last Tango in Paris, The Exorcist, etc.), feeling that a return to more ‘wholesome’ fare was needed. Mame, she believed, might well be the starting point for a revival of ‘family’ movies. 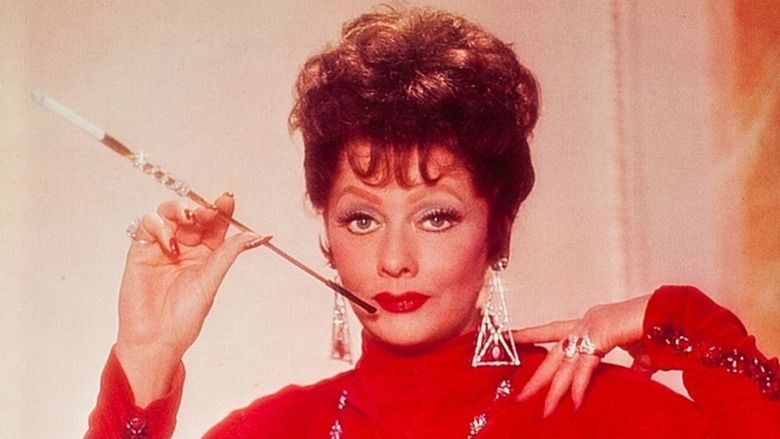 It is generally acknowledged that the extremely well-heeled Lucy kicked in $5 million to get the project off and running, on the proviso that she would be afforded first refusal to play the title role. At that time Angela Lansbury had become ensconced in the Mame role on Broadway and was wowing audiences night after night, so Lucy went along to see her performance. In fact, she even ventured backstage to congratulate Angela, telling her she was amazing in the part and a certainty to land the film role. According to Angela, she was touched by Lucy’s praise until she noticed the red-headed comedienne sitting in the wings during the performance – taking notes. No stranger to Hollywood intrigue and behind the scenes politics, Angela knew there and then that she would be most unlikely to be playing Mame on the screen. Angela as Mame on Broadway

Warner Bros. decision to overlook Angela for the lead is a puzzling one. She was an actress of considerable standing, not only on Broadway, but in the movies as well. A three-time Oscar nominee – for Gaslight (1944), The Picture of Dorian Gray (1945) and The Manchurian Candidate (1962), she had even won a Tony for her performance as Mame on Broadway! One can only suspect that Lucille’s $5 million, coupled with any other pressure her stature in the industry was able to exert on the studio, combined to give her the nod and to remove Angela from the running.

Lucy was signed and her contract gave her casting approval. She did not like Madeline Kahn’s interpretation of Gooch, complaining that she was ‘too shapely’ for the character, so she fired her from the picture. At the time, Madeline was desperate to play Lili von Schtupp in Mel Brooks’ Blazing Saddles, about to commence shooting, so she needed to be fired (rather than quit) from Mame, in order to be paid for both films. Whether or not Lucille knew of this and decided to surreptitiously help her out is not known. Madeline herself stated years later that she was definitely fired from Lucy’s picture. Before shooting on Mame commenced, however, songwriter Jerry Herman (he wrote the score for Mame), went to Warner Bros. and begged them to reconsider, to cast Angela in the lead instead of Lucille. He argued that Lucy was far too old (she was 62 at the time and Angela was 47), that she would have to be photographed in soft focus, and that her singing would have to be dubbed. He lost the argument. As it turned out, Lucy refused to let anyone do her singing for her anyway. Instead, she croaked her way through song after song. Audio engineers tried everything they could think of to enhance her vocals, to make them at least ‘passable’, but most people would agree they were fighting a battle already lost. Lucille’s breathing was such that she was barely able to complete a sentence without becoming winded. She was a heavy smoker and the habit had taken its toll. Even simple phrases such as, ‘Open a new window’, had to be patched together from several takes. All this splicing made it impossible for Warners to release a 5.1 stereo soundtrack for their movie without revealing the hodge-podge of Lucy’s original recording efforts. When the critics savagely attacked her croaky singing voice, her response was defiant. ‘Mame stayed up all night, drinking champagne. What did you expect her to sound like? Julie Andrews?’

Watching the film, it is painfully apparent that Lucille is continually shot in soft focus. Critic Rex Reed scarcely endeared himself to her when he famously suggested in print that it ‘looked like they had rubbed chicken fat on the camera lens to shoot her.’ In short, there is absolutely nothing to like about the screen version of Mame or Lucy’s performance in it. This became immediately apparent to Warners when they screened it for the first time at the studio. Their intention had been to release the picture in late 1973, in time to qualify for Oscar nominations. It did not require a genius to realize that any Oscar recognition was out of the question, so release was delayed until the spring of 1974.

Lucille was devastated by the critics’ savage reaction to her performance, but she was equally shattered by the dismal public response as well. She was used to success and adoration so public ridicule and disdain deeply hurt her. She vowed never to make another movie. In truth, after Mame, producers and writers were not exactly bashing her door down with proposals anyway. She had become persona non grata. The picture was budgeted at $12 million and recouped about half that amount, mostly due to the loyalty of Lucille Ball fans (there were still plenty of them) around the world.

Time Magazine was especially brutal with its revue, directing most of its venom at the hapless, aging star. ‘The movie spans about 20 years, and seems that long in running time’, it commented. ‘Miss Ball has been molded over the years into some sort of national monument, and she performs like one too. Her grace, her timing, her vigor have all vanished.’ Stanley Kauffman, although conceding that she might have made an excellent Mame 15 years earlier, was scathing nevertheless, describing her as, ‘too old, too stringy in the legs, too basso in the voice, and too creaky in the joints.’ We can only speculate on Angela’s reaction to all this. My guess is that she was and is far too classy, (then or now), to comment or to criticize.