William Holden featured in a lot of very good movies during his career. Women adored him, even men grudgingly conceded that he was both rugged and charming, certainly no milk sop. Unfortunately, he was also an alcoholic, from his teens until the day he died. He was gifted with talent, looks, charm and charisma. He was also strong, fearless and intelligent, blessed with all the qualities that most other men can only dream of. And yet he drank it all away.

He was born William Beedle Junior in Illinois in 1918. His family moved to Pasadena, California when he was three, and 16 years later, in 1937, he was signed by Paramount Pictures because of his looks alone. The studio threw him into Golden Boy when he was 20 and nowhere near ready to carry a major film. His insecurity, lack of confidence, led to his need for reassurance through alcohol. Nearly 5,000 actors went after the part, but Barbara Stanwyck pushed hard for him to get it, and she carried considerable clout back then. The studio relented and Bill Holden’s career commenced. He and Stanwyck had a two-year romance that ended when he met Brenda Marshall. After war service Holden returned to Hollywood older and wiser. In 1950 he landed two plum roles, one opposite Gloria Swanson in Sunset Boulevard, the other alongside the zany Judy Holliday in Born Yesterday. Three years later he reached the top of the pile by winning a Best Actor Oscar for Stalag 13. Yet, even with all this success at his feet he was, by then, hopelessly addicted to booze. His wife since 1941 was actress Brenda Marshall (known as Ardis to her family and friends), and she soon tired of his drunkenness, for Bill Holden was a nasty, nasty drunk. Their marriage faltered quickly, becoming little more than a series of separations as Holden took lovers wherever he found them and Ardis led her own life. 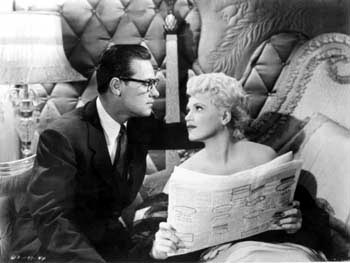 and with Judy Holliday in Born Yesterday Bill and his Oscar for Stalag 13

By the time filming had completed on Sabrina in 1954, Holden and his co-star Audrey Hepburn were madly in love. She would later break it off, partly because of his alcoholism, but mainly because she discovered he could never have children. And Audrey desperately wanted them. He lied to her for months before finally admitting he had undergone a vasectomy a couple of years earlier. She ended their relationship on the spot. Audrey might have been prepared to put up with his alcoholism, but the prospect of a marriage without children was unacceptable. And he had blatantly lied to her. She could no longer trust him.

with Audrey Hepburn in Sabrina

Although the couple had been extremely discreet about their romance, a crew member on the set of Sabrina had walked into Holden’s dressing room without knocking on one occasion, and caught them in an ‘intimate moment’. Soon afterwards, Bill took Audrey home to meet Ardis. In fact, he always brought his girlfriends home to meet her. It was that kind of marriage. Ardis immediately realized that this particular girlfriend was different to the rest. This one her husband really cared for. Audrey was niceness and class personified. Ardis told her husband to end it, but Audrey soon did that of her own accord. She met Mel Ferrer and then Paramount stepped in. Despite their discretion, Bill and Audrey were soon found out by Paramount. When Audrey rebounded to Mel Ferrer (who wanted kids as much as she did), the studio insisted that their engagement be announced to the media in the presence of Holden and his wife in their home. Media suspicions needed to be put to rest. It was duly done. Audrey also dated JFK before he was married. Whether or not they were intimate is unknown, but given his track record, that is entirely possible. Then again, their relationship was very brief, so maybe Audrey stood her ground. Either way, they must have remained friends because the year after Marilyn Monroe sang ‘Happy Birthday’ to him it was Audrey’s turn to do so, which she did, at what would be his last birthday.

Her conduct during World War Two has been documented. She occasionally delivered messages for the Resistance. In fact, a great many Dutch children were used for this because the occupying Germans did not search them. She also worked as a nurse tending wounded British soldiers during the fighting in Arnhem. What is less known to the public is that both her parents were Nazi sympathizers! Her mother attended at least one Nuremberg Rally, and even wrote a glowing report about it in the Fascist magazine Blackshirt. Audrey’s father, also a member of the Fascist Party, was ‘detained’ on orders of the House of Commons for the duration of the war. Audrey never embraced her parents’ beliefs for a moment. Holden went on to other affairs, his alcoholism ruining each in turn. In the same year Sabrina was released he embarked upon a short but torrid affair with his co-star in The Bridges at Toko-Ri, the stunning man-eater Grace Kelly. He and Shelley Winters had an interesting arrangement. Once a year they would meet at a hotel for a night of passion, then go their own way The French beauty Capucine was with him in the sixties for a couple of years. Even Jackie Kennedy warmed his bed for a while. with another lover, Capucine

In 1966, he was drunk-driving in Tuscany, Italy when he crashed his vehicle into another, killing the driver. He was given a shamefully inadequate eight-month suspended sentence. It was nothing more than a slap on the wrist, but it proved to be the last straw for Ardis, his wife. (Brenda Marshall always preferred to be called by her real Christian name). She had nothing more to do with him and they officially divorced in 1971. His last affair proved to be the love of his life. It was with the former star of Hart to Hart, the gorgeous Stefanie Powers. She was a smart, no nonsense woman, seemingly far happier looking after animals on Holden’s Kenyan ranch, than dealing with the phony world of Hollywood hoopla. Their relationship lasted ten years until 1979. When they met, she was 32 and he 56. Soon after they began seeing one another Stefanie stopped in to see Holden in Palm Springs and found him convulsing from alcohol poisoning. He could stop drinking when he was with her, but his friends led him astray whenever they were apart. Bill and Stefanie shared a love for Africa and hunting, although Holden’s hunting days ended the day he shot an antelope in her presence. He looked down at the slender neck and large eyes of his ‘kill’, and was visibly shaken. ‘Oh, my God’, he exclaimed. ‘I’ve just shot Audrey Hepburn.’ He never hunted again. Stefanie learned later of his affair with Miss Hepburn.

By 1979 it was over. Holden’s drinking had become progressively worse, and Stefanie could no longer continue putting up with his erratic, dangerous behaviour. Two years later she heard on the radio that he had tripped over while drunk in his hotel room and struck his head on a table, severing an artery. He bled to death on the floor, and lay in his room until discovered four days later. ‘I didn’t cope well at all’, Stefanie recalled. ‘I was in mourning for ages.’

Director Billy Wilder, a long-time admirer of Holden, could not believe he had died in such a pointless, mundane way. ‘I would have assumed that he had been gored by a water buffalo in Kenya’, he said.’ That he had died in a plane crash approaching Hong Kong, that a crazed jealous woman had shot him, and he drowned in a swimming pool. But to be killed by a bottle of vodka and a night table – what a lousy fade-out of a great guy!’