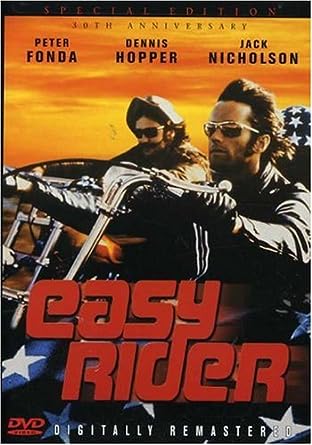 Easy Rider (1969) was intended to star Peter Fonda, Rip Torn and Dennis Hopper, but Fonda encountered impenetrable opposition when he went in search of financial backing, because nobody wanted to get involved with a project that included the notoriously difficult Dennis Hopper. His professional reputation was in the toilet and he was, not too inaccurately, deemed by most of Hollywood as a man on the brink of insanity. He suffered from severe bouts of depression, flew into rages at the slightest provocation, was heavily into amphetamines and LSD, and was in his sixteenth year of smoking marijuana on a daily basis. He was also so anti-establishment that scarcely a soul in any kind of authority in the movie business would even talk to him…and he had a deep and dark, unnatural obsession with the late James Dean. Witnesses recalled him once stuffing his finger in an executive’s nose during a meeting at Columbia Studios! His marriage to society girl Brooke Hayward was also, not surprisingly, on its last legs. He desperately needed to regain some professional respect, so getting Easy Rider up and running was vitally important to him.

In 1968, Fonda and Hopper attempted to peddle an idea for a feature (titled The Queen) to a new production company called BBS. The feature would star both men plus the unknown Jack Nicholson, and they would be playing former members of the Kennedy administration, Robert McNamara, Dean Rusk and Lyndon Johnson, who would be plotting the assassination of JFK! BBS would not touch it with a barge pole, but they did show interest in the duo’s alternative idea – a biker picture. Biker movies were cheap to make and they always made money, so the two hopefuls wrangled a budget of $375,000 out of BBS and were told to go make the thing. Easy Rider was on its way.

The picture was about to break new ground in movie-making. Apart from the three stars and a handful of cameos, almost everyone else in it were non-actors, collected from wherever the film crew stopped to shoot scenes. This was just not done with feature films, but the miniscule operating budget left them little choice. There simply was not enough money to pay everyone. Even Fonda and Hopper themselves were working to scale, being paid just a few hundred dollars. So, when the third man, Rip Torn, demanded $4,500 for his services, he and Hopper clashed, Rip took a walk and the production was suddenly minus one third of its stars. During an interview on The Tonight Show with Jay Leno in 1992, Hopper claimed Torn had pulled a knife on him during a pre-production meeting. Torn quickly refuted his story and said it was Hopper who had actually pulled the knife. He then sued Dennis for defamation – and won.

Hopper’s drug-induced tirades were so disruptive that crew members wrote to BBS in New York explaining why they were quitting the production. Fonda and Hopper quarreled continuously as well. In fact, Fonda did all in his power to have Hopper replaced, but was stymied by the fact that Dennis had written much of the screenplay, was one of the stars and was directing the picture! Aware of the problems, BBS sent Jack Nicholson down to New Orleans as an executive producer come trouble-shooter. It was his task to sort things out. He got the show back on the road, replaced the recently departed Mr. Torn with himself, and even took a major hand in the selection of the sixties hit songs for the soundtrack. 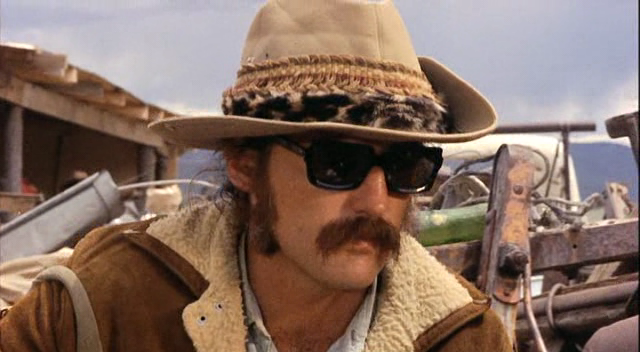 The soundtrack would prove to be a major component of the picture’s success. The Beatles used their own songs in their films, but to take previously recorded tracks and insert them into a movie, instead of having someone create a score was revolutionary at the time. Today, of course, it is commonplace. Fonda actually wanted Crosby, Stills & Nash to record the soundtrack, but Hopper would not have a bar of it. A band that drove around in limos, he said, had no comprehension of the movie they were making. The highly volatile actor then confronted them, and issued a warning. ‘If you guys try to get into the studio again, I may have to cause you some bodily harm.’ Dennis was one stroppy guy.

The graveyard scene with Peter Fonda was shot, without permission, in the New Orleans cemetery, St Louis # 1, a Catholic cemetery. Catholic members of the audience took offense at this and the Church has since banned all film crews from shooting there unless they are doing a documentary. The 1999 thriller Double Jeopardy was filmed in New Orleans, but not in the Catholic grounds. The crew did all their filming at the Lafayette Cemetery, which is Protestant.

As Fonda, Hopper and Nicholson traveled from state to state making their movie, the three men gradually developed a friendship. But it took a long time before Peter and Dennis grew on one another. They were responsible for most of the screenplay, yet Hopper would later demand that he be given sole credit for it. Fonda refused and the issue went to court where a judge promptly threw out Hopper’s writ.  He directed the picture, which was basically Peter’s idea in the first place, and Jack kept a lid on everything. Fonda and Hopper play two biker/drug dealers who have named themselves Captain America and Billy the Kid. They set out to ‘discover America’ on their motorcycles and to flog their stash of cocaine. Nicholson is a boozy young lawyer they meet in a jail cell.

The movie, of course, made Jack a star overnight. The now famous campfire scene in which his character delivers a monologue on ‘what’s wrong with America’ became one of the most talked about scenes of the sixties. It required numerous takes to get it in the can and each time there was a re-take the three stars smoked a joint. A real marijuana joint. Hopper estimated they went through more than a hundred! Instead of playing normal and acting stoned, most of the time Jack found himself playing stoned and trying to act normal. Hopper directed and acted intermittently throughout the numerous takes and spent a great deal of the time rolling around in the bushes in hysterics. Crew members later stated that grass was being smoked on the set all the time. If you wonder why the bikes are not visible in the campfire scene, the reason is a simple one. They had already been stolen. Incidentally, future actress Bridget Fonda, Peter’s daughter, appears as a hippie commune child. Future convicted murderer Phil Spector plays the cocaine dealer.

Easy Rider took quite some time to gain momentum, even among the counter-culture element. When enough underground radical publications had heaped praise on it, the establishment magazines started to climb on the bandwagon. Nicholson’s performance was lauded from the outset, Fonda was universally described as ‘wooden’, and Hopper probably turned in the best acting but was overlooked due to the focus on Nicholson. Fonda certainly thought so.

Peter’s father, the iconic actor Henry, was less impressed with the whole thing. ‘That little bastard..,’ he was heard to say about his son, ‘he and some other punks have produced a movie out of nothing and have made more money from that piece of crap than I have made in a whole lifetime in Hollywood.’ The film was made for under $400,000 and raked in a whopping $45 million. Like it or not, that was some kind of an achievement. Furthermore, the hitherto ignored Jack Nicholson (he had previously appeared in sixteen B-movies and had guested on TV series without so much as causing a ripple of interest), suddenly found himself famous, rich, and nominated for a Supporting Actor Academy Award! He was only on the screen for seventeen minutes. Only in Hollywood, they say.