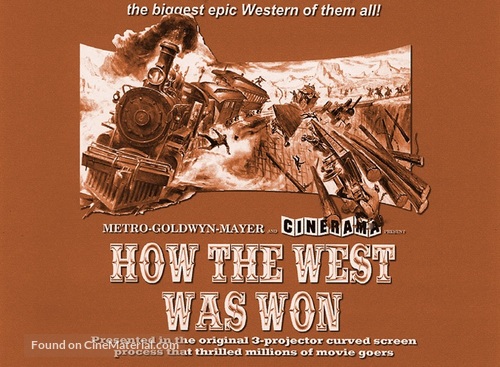 How The West Was Won (1962) was an ambitious attempt to encapsulate several stages of American history and westward expansion, over several decades in the nineteenth century (1839-89), and to squeeze the findings into a movie that ran for 164 minutes. Fur-trapping, the Gold Rush, the US Civil War and the building of the trans-continental railroad were each featured and connected by members of the same family down the generations. Unfortunately, the popularity of the western movie was on the decline by 1962, probably on account of the numerous western TV shows that proliferated on the box. 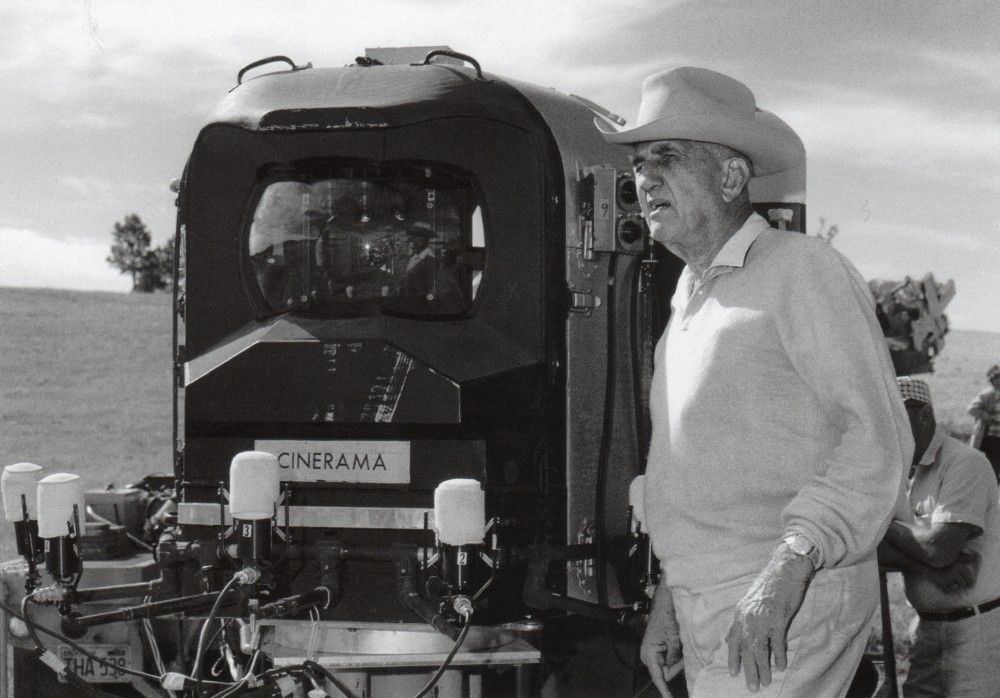 A camera used in the Cinerama process

The picture was filmed in the new Cinerama process, a process so expansive it could not really be configured for close-ups. Consequently, the best it could do was to place a key actor or actress in the central frame, then try to get in as close as possible. Many of the players were intimidated as the enormous camera (it contained three cameras beneath a black hood) would be literally in their faces– just eighteen inches away! Several of the actors felt the need to ‘elevate’ their performances (much as they would on a theatrical stage), at the expense of the more subtle movie-acting style. The three cameras employed in Cinerama resulted in two dividing lines separating the three projections. Although the directors (John Ford and Henry Hathaway) skilfully used camouflage techniques to hide the joins (the placement of trees, building corners, lamp posts etcetera), they remained clearly visible far too often, giving a gimmicky feel to the whole production. An intermission became necessary to allow projectionists to re-thread the three projectors and synchronize the sound. 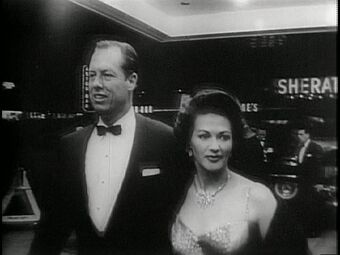 Actor/stuntman Bob Morgan was playing a robber in the log-train sequence and was crouched next to a pile of logs on a flatcar when the chain holding the logs together snapped and he was crushed beneath them. It would cost him a leg and result in him taking five years before he could recover to the point where he was able to move by himself and walk unaided. MGM did everything in the studio’s power to delay, defer and avoid paying him compensation during those years. In fact, when the medical bills became impossible to pay, his wife, actress Yvonne de Carlo, was compelled to accept the role of Lily Munster in a new TV series titled The Munsters in 1964, as her husband descended into alcoholism. Fans of the 1960 epic Spartacus will doubtless recall the ‘I’m Spartacus’ scene at the end of the movie. The actor who is often mistaken for George Kennedy in that scene is Bob Morgan. Indeed, Kennedy was not in the film at all.

Hollywood’s irritating penchant for placing aging actors in younger, virile roles continued in How the West Was Won. James Stewart’s character Linus Rawlings was supposed to be 28 years old in the fur-trapping sequence set in the 1830s, when the actor was actually 53. During the picture we learn that he had been killed in the Civil War almost thirty years later! Jimmy offered to play his own dead body in the Civil War story but was refused by John Ford. A double who bore no resemblance to Stewart was used instead. In fairness to Stewart, he only accepted the Rawlings role after Gary Cooper, the original choice, had passed away. Jimmy always felt he had been miscast.

There is a scene in which Indians attack a wagon train and a Conestoga wagon tumbles down a hill. In order to create the illusion of the audience being inside the tumbling wagon, an elaborate filming plan was devised. A track was built down the slope of a small hill, the top portion of the wagon (minus the wheels), was attached to a flatbed, along with a mechanism that would turn the wagon over and over as the flatbed was sent down the hill. A camera was attached to one end of the flatbed so that it could shoot directly through the turning wagon. The stuntmen (including the legendary Loren James who was stunting for Debbie Reynolds), tumbled around inside the wagon along with boxes, barrels and other cargo. It took two days and several takes to complete the sequence, yet in the final cut it lasted no more than five seconds on the screen!

Some non-Cinerama stock footage was used in How the West Was Won. The Mexican army marching past the Alamo came from John Wayne’s 1960 movie The Alamo and a Civil War battle was lifted from Raintree County (1957). The opening pan across the Rockies and the final scenes of the modern United States were from This Is Cinerama (1952). The narration was done by Spencer Tracy as he was too ill to act in the picture. Interestingly, he refers to Native Americans as ‘primitive man’, a statement that is still on the DVD version today and would be considered racist. This quaint Australian production was based on the autobiographical work by Lyle Penn titled ‘Penn’s Pictures on Tour – The Biography of an old-time Showman’, an account of his travels with his father’s picture show as they exhibited films around Australian country towns during the 1920s. It was the first film developed and financed by the New South Wales state government since it backed 40,000 Horsemen back in 1940.

Australian actor John Meillon had struggled for years to attain star status and this movie was expected to propel him into the big time. However, the producers brought in internationally known Rod Taylor to play a supporting role. The local media focused all its attention on him and Meillon resented it. Although both men were drinkers and imbibed (along with supporting player John Ewart) at every opportunity, the cameraderie was not quite as spontaneous as it appeared.

Taylor, a native of Sydney, New South Wales, arrived back in his homeland with a swollen head and accompanied by his bodyguards. He quickly assumed the mantle of a big Hollywood movie star. Whereas he could be charming, funny and delightful company when he chose to be, he was also a serial womaniser who soon had his entourage scouring the country towns in search of young star-struck women for one-night-stands. Several of the Aussie crew were quite disenchanted with Taylor’s ‘love ‘em and leave ‘em’ policy regarding his numerous conquests throughout the seven-weeks of filming on location.

Ironically, his character (Palmer) in this movie had to be altered from an Australian to an American because the actor had completely lost his Aussie accent, having spent decades playing Americans in film after film. ‘I wanted to help the Australian film industry’, he magnanimously told the press. ‘I’d heard about some good movies made here lately, but it doesn’t matter how good they are if nobody’s seeing them…My name will certainly get US distributors interested. They know they can make at least a few bucks domestically on my name. And they can certainly make something with my name in terms of world-wide distribution.’ In truth, his career was beginning to wind down and he needed the money.