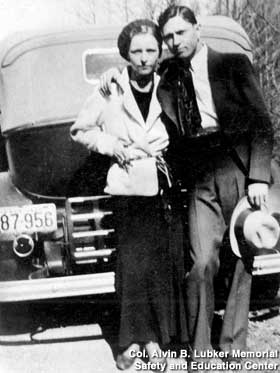 There have been two major films made about the notorious Texan bank robber/killers, Bonnie Parker and Clyde Barrow, and their two-year rampage through the southern states of America in the 1930s. One of these pictures, Bonnie and Clyde (1967), starring Faye Dunaway and Warren Beatty, focused squarely on the title characters and their relationship. It was a highly romanticized version of events, helped considerably by the matinee appeal of the two stars. The second film, The Highwaymen (2019), starring Kevin Costner and Woody Harrelson, is about the two retired former Texas Rangers, Frank Hamer and Maney Gault, who were hired by the corrupt lady governor of Texas, Miriam ‘Ma’ Ferguson, to ‘take down’ the notorious killers. In this account, we do not even get a clear look at Parker or Barrow until the final moments of the movie. 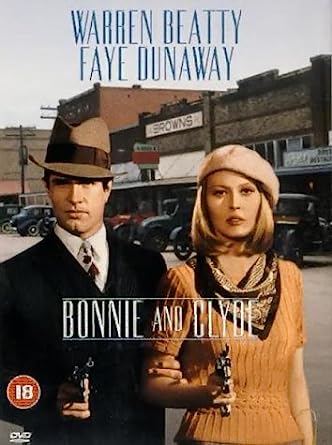 Many fans of the 1967 film were inclined to look at the exploits of Bonnie and Clyde through rose-coloured glasses; much as the general public did back in the thirties, having dined out on embellished and fanciful versions of the couple’s crime spree in the newspapers and magazines of the day. Conversely, the 2019 film deliberately de-glamorizes them, by almost ignoring the duo throughout the picture. Regardless of the focus, however, history tells us that the Barrow Gang randomly killed a total of thirteen people, nine of whom were police officers. How many of these unfortunates were despatched by Parker personally is still in dispute, although the later movie clearly wants us to believe she was a cold-blooded, calculating killer who personally killed at least one wounded officer. 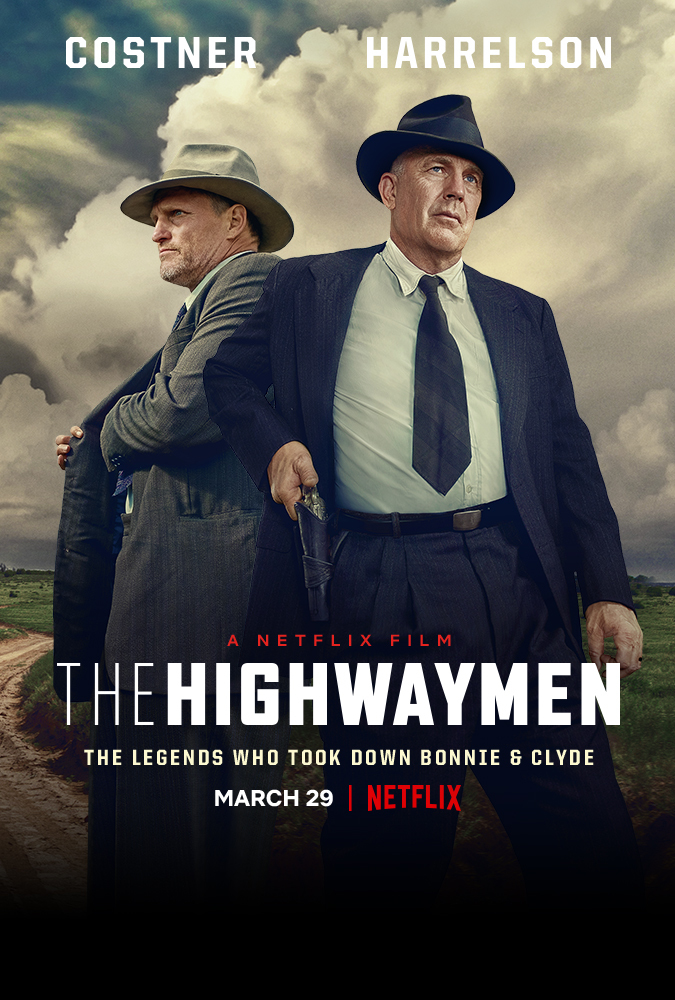 Whereas Bonnie and Clyde is considered to be a classic piece of cinema, The Highwaymen falls far short of that classification. It is primarily a solid, no-nonsense account of a man-hunt, a deliberate mission to bring two killers to justice – and that justice need not necessarily involve an arrest or a court of law. In short, Hamer and Gault were hired to find Bonnie and Clyde and to kill them! In order to vindicate this approach, The Highwaymen endeavours to convince us that Bonnie was a heartless killer who callously delivered the coup de grace to at least one mortally wounded police officer by calmly ignoring his pleas for mercy and shooting him in the face! The message is abundantly clear. If audiences are going to accept her being shot to pieces at the end of the film, then it is important they believe she deserves such a horrendous end. However, historically, there is major doubt surrounding her direct involvement in the killing of the police officer, as we shall see. The posse that ambushed Bonnie & Clyde – Hamer at bottom right

The murders of patrolmen H.D. Murphy and Edward Wheeler near Grapevine, Texas on Easter Sunday, April 1, 1934, are used by the makers of The Highwaymen to demonstrate the callous, murderous nature of Bonnie Parker. An eyewitness, a farmer, claimed to have seen her laugh at the way Patrolman Murphy’s head, ‘bounced like a rubber ball’ on the ground as she shot him. It was reported that a cigar butt (complete ‘with tiny teeth marks’, supposedly hers), was found near Murphy’s body. It has since been determined that Bonnie smoked only Camel cigarettes, not cigars. The iconic photo showing her with a cigar clenched between her teeth was staged as a joke by the Barrow Gang. Furthermore, the eyewitness’s account changed at each telling, until his story was totally discredited. This did not, however, deter the makers of The Highwaymen from using it in their movie. Gang member Henry Methwin testified that Bonnie was actually asleep in the back of the car when the shooting began, and that she approached the wounded Murphy to offer him assistance. Methwin admitted firing the first shot and said that Barrow had then killed the officer. Bonnie took no part in the assault at all. Methwin appears to have had no reason to lie about the level of her involvement, having already admitted that he had fired the first shots. 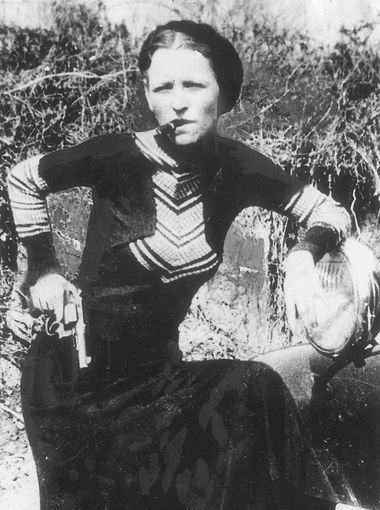 Bonnie posing with a cigar

In the 1967 film, we see Denver Pyle portraying Hamer as a complete buffoon. Frank’s widow was appalled by this and successfully sued Warner Brothers for defamation. Unfortunately, the Hamer family chose to settle out of court for a considerable amount of money, thus leaving the picture’s portrait of Frank pretty much intact. In reality, the man was a highly efficient lawman who had spent much of his life tracking down and ‘taking down’ members of the Ku Klux Klan. He and Gault tracked Bonnie and Clyde for 102 days over 15 states before bushwhacking them on a Louisiana back road south of Gibsland in 1934. Until the ambush Hamer had never even laid eyes on his quarries, much less been captured by them. An important question, however, remains unanswered to this day. Did Hamer call on Barrow and Parker to surrender at the ambush site? Members of the posse have given differing answers to that question down the years.

In The Highwaymen, he calls on the duo and when they make a slight move towards their weapons, the posse opens fire. It should be stated that the screenwriter, John Fusco, spent time with Hamer’s son, Frank Junior, and based his screenplay on much of what was related to him during their chats. The posse members themselves were divided into three pairs, each pair distrusting (and disliking) the others. Their obfuscation continued until their deaths, so what really took place at the ambush site shall forever remain unknown. Incidentally, the ambush in the 2019 film was filmed at the very spot where it actually took place over 80 years before. 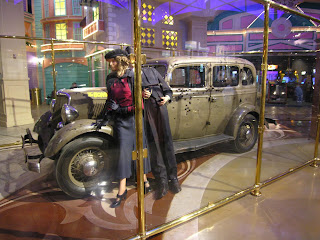 The car on display in Primm, Nevada

The outlaws’ V8 Ford, with their mangled bodies still inside, was towed into downtown Arcadia where a huge crowd soon gathered. Gault and a deputy tried to guard the bodies but were soon jostled out of the way by the clamouring mob. The coroner later reported: ‘Nearly everyone had begun collecting souvenirs, shell casings, slivers of glass from the shattered car windows, and bloody pieces of clothing from the garments of Bonnie and Clyde. One eager man had opened his pocket knife, and was reaching into the car to cut off Clyde’s left ear.’ An enterprising young woman cut off bloody locks of Bonnie’s hair and pieces from her dress, which were subsequently sold as souvenirs. Another ghoul was attempting to cut off Clyde’s trigger finger when Hamer and others pushed him aside.

There were numerous estimates regarding the number of wounds suffered by the bandits, but the parish coroner put them all to rest by officially reporting that there were 17 separate entrance wounds on Barrow’s corpse and 26 on Parker’s, including several head-shots on each. Over 20,000 people attended Parker’s funeral and 15,000 turned up at Barrow’s, most of them hoping to view the bodies. They were disappointed. Bonnie & Clyde’s car (it was actually stolen) changed hands several times for ever-increasing amounts. For a while one of its owners was charging visitors $1 each to sit in the front seat! Since 2011, the bullet-riddled Ford and the shirt worn by Clyde that fateful Louisiana day have been on display in the casino of Whiskey Pete’s in Primm, Nevada.  The six-man posse was promised equal shares of the $26,000 reward money offered from several sources, but most of these quickly reneged on their promises. The six men ultimately received a paltry $200.23 each!

The saga of Bonnie Parker and Clyde Barrow is one of those stories that the media has turned into legend. The couple involved were not worthy of the iconic status that has since been awarded them. Then again, the same could be said of Billy the Kid, Jesse James and any number of low-life criminals whose crimes have been transformed into something far exceeding the reality of their miserable, ill-spent lives. Of these two movies, I prefer The Highwaymen because it refuses to acknowledge two criminals as something other than what they were – anti-social, stupid, and vicious misfits who received their just desserts. As for Bonnie Parker: She was probably not the vicious killer the papers described, but she was still part of a gang that murdered thirteen people, most of whom were police officers doing their jobs, so she was just as guilty as the rest of the Barrow Gang. Who knows how many more lives they might have taken if the Hamer posse had not intervened?