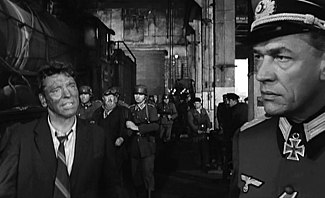 Like many WW2 movies, The Train is loosely based on an actual event. A few weeks before the liberation of Paris in 1944, the Germans decided to freight five boxcars of art treasures stolen from the Jeu de Paume Museum in Paris, back to Germany. This entertaining film is about the efforts of the French Resistance to foil those plans and thus save these priceless artworks from being lost forever. There is a great deal of poetic license taken with the way they accomplish this which makes for a tense, edge of the seat, thriller. The elaborate lengths the Resistance goes to in the movie were not mirrored in real life. The real train back in 1944 was merely routed onto a ring railway and circled around and around Paris until the Allies arrived.

The star of the picture is undoubtedly Burt Lancaster who celebrated his 50th birthday during filming. About half-way through the shoot he took a day off to play a round of golf, during which he stepped in a hole and severely re-aggravated an old knee injury which hampered him throughout the remainder of the shoot. It became necessary to alter the screenplay and have his character, Labiche, wounded in the leg so that his limp for the second half of the movie could be satisfactorily explained. Even so, Lancaster performs all his own stunts in the picture. Astutely directed by John Frankenheimer, shot in black and white, and featuring Paul Scofield and Jeanne Moreau, The Train is an under-rated wartime drama of quality.

Twelve O’Clock High (1949) has been cited by surviving bomb group crew members as the only accurate depiction from Hollywood of their life during the Second World War. Gregory Peck is superb as General Frank Savage, ably supported by a fine cast of quality actors. The year 1949 was not a strong movie year, so it is disappointing to see both Peck and the picture being unsuccessfully nominated for Oscars. Perhaps, this was due to the public’s waning interest in WW2 films, understandable considering the glut of such films turned out over the previous decade.

Most of the characters in the story are based on real-life people. General Savage was inspired by General Frank Armstrong. Lt. Jessie Bishop is based on Lt. John Morgan, a B-17 co-pilot who was awarded the Medal of Honor for landing his aircraft after his pilot was severely wounded on a bombing run. Major Joe Cobb is based on Major Paul Tibbets (later Colonel Tibbets), the man who made it into the history books as the pilot of the B-29 ‘Enola Gay’ which dropped the atom bomb on Hiroshima in August 1945. Of special interest is Sgt McIlhenny, (General Savage’s driver), who was inspired by a certain Sgt Donald Bevan who was shot down over Germany in 1943 and made a prisoner of war. With fellow POW Edmund Trzcinski, he co-wrote the play ‘Stalag 17’ about their wartime experiences as prisoners. Their play was later made into the 1953 Oscar-winning movie of the same name. We also hear in one scene, Colonel Davenport say that ‘the old man’ (Dean Jagger) had ‘slipped into Curt May’s plane’. He was referring to Major Curtis LeMay who would later attain the rank of general and become Chairman of the Joint Chiefs of Staff in the US.

Although the story is, of course, set in England, most of the filming was shot in the USA. Audiences were quick to notice that the vehicles used by General Savage all had left-hand steering. Oops! During the war all British runways were painted black to make them more difficult to see from the air, whereas the American runways that were used in the picture were painted white. Stunt pilot Paul Mantz was paid $4,500, (the highest fee for a single stunt to that time), to crash-land a B-17 single-handedly for the film. No-one was entirely certain a solitary crewman could operate and land a B-17. Evidently, Mantz was confident he could pull it off. And he did.

Dean Jagger collected a Best Supporting Actor Academy Award for Twelve O’Clock High, but Peck lost out to Broderick Crawford for All the King’s Men; that movie also picking up the Best Picture Oscar. Director Henry King was completely overlooked for the Best Director award, despite his film being nominated, and the wonderful screenplay by Sy Bartlett and others also failed to garner a nomination. Personally, I rate this movie in the top five war pictures of all time. 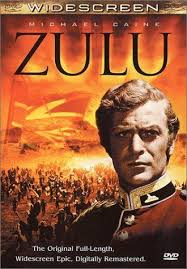 I was a teenager when Zulu (1964) came to my local cinema. Rarely has a movie captivated teenaged audiences (young boys anyway) as did this iconic tale. Maybe, it was the widescreen, chock-full of British soldiers clad in scarlet with white pith helmets. Maybe, it was the arrival of Michael Caine as a star of the first magnitude; or maybe, it was John Barry’s stirring score. Perhaps, it was a combination of all three. The story, of course, is based on an actual battle, the siege at Rorke’s Drift in Natal, South Africa in January, 1879.

The makers of Zulu changed a few things for dramatic effect (as if the battle itself was not dramatic enough). First of all, they had the soldiers fighting in their full-dress scarlet uniforms and pith helmets; not in the fatigues and forage caps the real combatants wore. Better for the cinematography, you see. Second, they altered several of the characters. The joint commanders, for instance, Lieutenants John Chard and Gonville Bromhead, were transformed into officers of the highest calibre. In reality, they were completely unexceptional men who appeared destined to remain lieutenants until their retirement, until fate and history lent a hand. Bromhead (Michael Caine in the picture), was all but stone deaf and had, in fact, been left behind at Rorke’s Drift (when the main column entered Zululand), because he was considered to be a distinct liability in a pitched battle.

Private Henry Hook (played by Anthony Booth) was, in reality, a ‘tea totaller’, yet for the purposes of making him more interesting, it was decided to change him into a hard-drinking, malingering trouble-maker. The Reverend Otto Witt and his daughter, Margreta, were tossed into the mix when, in reality, both were far away in Pietermaritzburg when their Rorke’s Drift mission came under attack from the Zulus. Furthermore, they were not, as depicted in the opening scenes, visiting King Cetewayo’s royal kraal when the war began. 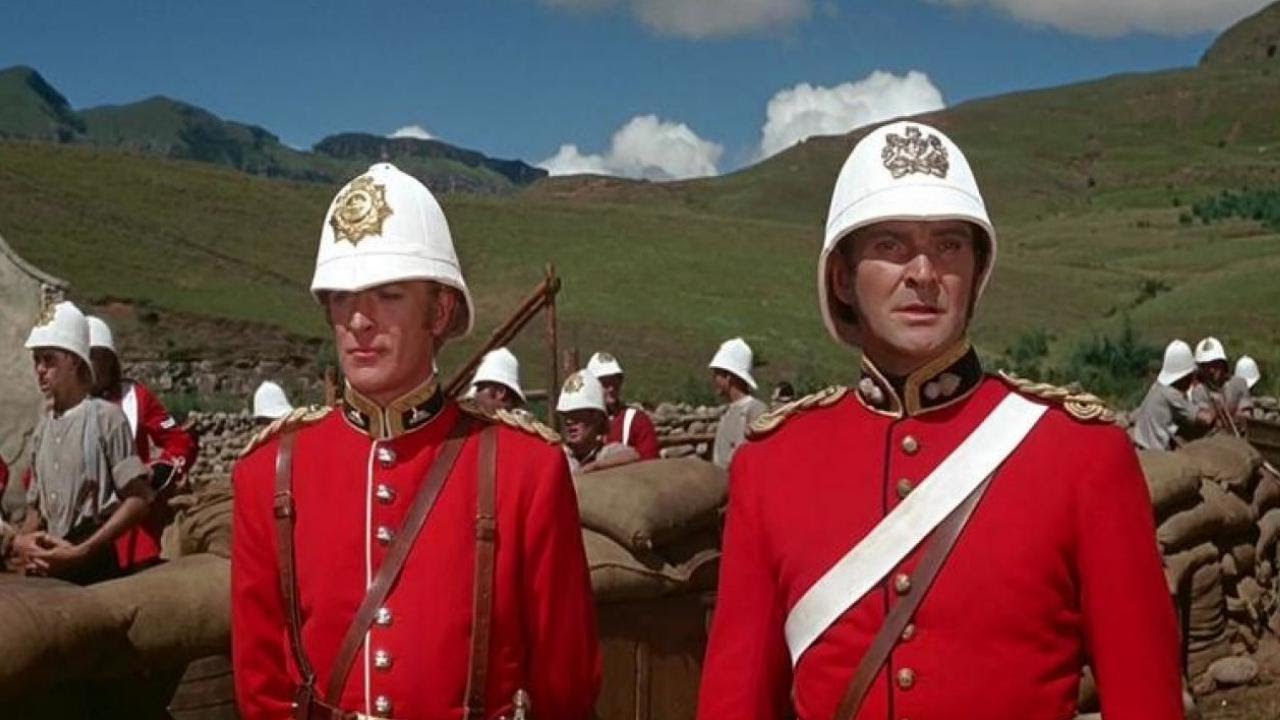 As any military historian would know, the Rorke’s Drift action saw an unprecedented eleven VCs awarded to the defenders. To be perfectly frank, such a number of recipients for an action that resulted in a mere handful of casualties on the British side, borders on the ridiculous. In fact, Colour-Sergeant Bourne would have made twelve VCs, had he not opted for a commission instead. I have published a book about the British Army in the 19th Century in which I look at this in more detail, so I will not pursue the matter any further here except to say this: Over 90% of all VCs ever awarded have gone to combatants fighting an offensive action, in other words exposing themselves to enemy fire in order to launch an attack or to rescue a fallen comrade. Hardly any Victoria Crosses are given to soldiers fighting from a fortified position in a defensive action. Yet the defenders at Rorke’s Drift seem to have been the exception to the rule. It appears to have been a politically motivated decision to shower the defenders with VCs, in an attempt to draw the public’s attention away from the disastrous battle at Isandlwana a day earlier.

Regardless of the changes and the general poetic license taken making this movie, as a spectacle Zulu has few peers. It is an extremely entertaining piece of cinema, one I have watched many, many times. The only flaw from an entertainment point of view, in my opinion, is the annoying, drunken rambling emanating from Jack Hawkins’ character, the Reverend Mr. Witt. He prattles on and on for far too long until, mercifully for us all, he is sent on his way out of the mission. As for the heroic aspect of the film, it is so well contrived we tend to overlook that the Brits in the battle were armed with Martini-Henry breech-loading rifles, while the Zulus only had stabbing spears and knobkerries. No wonder the redcoats emerged intact.