Joan Fontaine and Olivia de Havilland were real life sisters who were born in Tokyo, and then moved to America. Olivia was born in 1916, Joan a year later.

Max Reinhardt spotted Olivia in a college version of A Midsummer Night’s Dream, and was so impressed he placed her in both his stage version and in the Warner Bros movie of 1935. She quickly became a star and would go on to play opposite Errol Flynn in eight pictures, admitting years later that she had a terrible crush on him. She has always maintained that was as far as her attraction ever went. And Flynn never boasted of having seduced her either, although he, too, felt an enormous attraction towards his co-star. They first appeared on screen together in Flynn’s debut film Captain Blood (1935), and the chemistry was immediately apparent.

Warners loaned her out to David O Selznick for Gone with the Wind in 1939. Interestingly, as of July 2015, she and Mickey Kuhn are the only two survivors of GWTW. He was just 7 years old when he played Beau Wilkes in the movie, and is now 83. Olivia, who played the sugary Melanie, will turn 100 in June 2016! 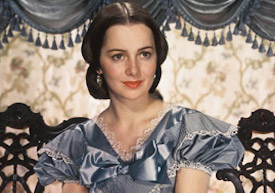 As Melanie in GWTW

Undoubtedly, her greatest moment came off-screen when she took on the studio system and won. Nobody had ever done that successfully before. Prior to her landmark victory in 1945, studios could suspend actors at will for any reason they saw fit, and then tack the suspension time onto the end of the actor’s seven-year contract. In effect, therefore, a seven-year contract could drag on forever if the studio heads felt so inclined. The ‘de Havilland decision’ outlawed this practice once and for all. It took courage for her to risk her entire career in this way, and her peers owed her an enormous debt of gratitude.

Joan Fontaine arrived in Hollywood well after her sister had become established in the movie business. When the Japanese attacked Pearl Harbour in 1941, the FBI searched Joan’s home for weapons, simply because she had once lived in Japan. In fact, she had returned to Tokyo and to the American School there in the early thirties, at the same time Olivia was beginning to make a name for herself on the screen in California. Joan joined her there in 1934. They even roomed together for a while. Joan was disappointed when her mother told her she should find a surname other than her real name of de Havilland. Mum felt that Olivia, should be the only de Havilland in movies. ‘I would like to have been Joan de Havilland’, said Fontaine. ‘It’s going to be on my tombstone’. Instead, she took her stepfather’s surname of Fontain and added an ‘e’ to it on the advice of a fortune-teller.

She won the coveted lead in Rebecca primarily because David O Selznick overheard her at a party arguing that Margaret Sullavan should get the role. It struck him that an actress who could deprecate her own chances for such a sought after role had exactly the right humility required to play it. Laurence Olivier wanted his wife Vivien Leigh to get it, but she was far too beautiful and sophisticated for the part. He took his disappointment out on the luckless Fontaine and treated her poorly throughout the production. In their love scenes he reputedly whispered obscenities in her ear. As it happened, her dazed response was precisely what Hitchcock wanted, so he did not intervene, claiming later that it actually enhanced her performance.

Joan was given a party on the set of Rebecca for her 22nd birthday. With the exception of Reginald Denny, none of the other featured players attended. Olivier, Judith Anderson, George Sanders and Gladys Cooper drank champagne in Olivier’s room, telling Denny they could not be bothered. This may or may not have had something to do with Hitchcock telling Fontaine that everybody involved with the production hated her, a callous ploy he adopted to extract from her a more insecure and nervous performance. Olivier’s response to Joan’s decision to marry actor Brian Aherne was an unkind; ‘Couldn’t you do better than that?’ The marriage lasted five years but was strained by Joan’s cystic condition that made intercourse painful for her. ‘My marriage to Joan Fontaine roughly coincided with World War II’, said Aherne years later. ‘It even began the same year. Enough said?’ On the night before exchanging vows, Aherne had a friend call Joan to advise her that he was having second thoughts about the wedding. The bride to be made it abundantly clear that, even if they divorced the next day, he had better turn up. So he did. Years later, Joan wrote that he spent most of their wedding night whining about the love of his life, former girlfriend Marlene Dietrich!

Friends at the 1942 Oscars evening observed director John Huston seated alongside his wife, yet blowing kisses to Olivia across the empty dance floor. And the ‘butter wouldn’t melt in her mouth’ Miss de Havilland was returning them with similar disregard for the presence of Mrs Huston. It was clear to all that John and Lesley Huston’s five-year marriage was about to end. As his assistant-director and friend Vincent Sherman noted: ‘The poor guy is having troubles. His wife comes in one door as Olivia de Havilland is walking out the other…’ Huston’s home movies at the time brazenly show the lovebirds romantically clowning in his pool; Olivia throwing her arms around him and climbing on his back. She may have been sweet, innocent Melanie on-screen, but off-screen Olivia played hardball.

The sisters’ long-running feud has been well-documented, with blame apportioned to both women. ‘…I haven’t been able to forgive her for not inviting me to our mother’s memorial service…and for other cruelties’, said Joan. Perhaps, the will Olivia wrote when she was nine years old sowed the seeds of their rivalry. It read: ‘I bequeath all my beauty to my younger sister Joan, since she has none.’ Olivia blamed her sister’s winning of the Oscar for Suspicion as the defining moment in their relationship. ‘Joan deserved to win and did’, she admitted. ‘But Joan is fifteen months younger than I, and I knew I would lose prestige with her if I lost – I had always been a heroine in her eyes – and I did! The goddess had feet of clay, and she let me know it, too! Olivia had been nominated for Hold Back the Dawn that same year. Incidentally, Joan’s win for Suspicion marked the only time an actor or actress in a Hitchcock movie won an Oscar.

Decades later, Joan named actor Conrad Nagel as the man who de-flowered her when she was twenty. This was among a host of statements in her 1979 autobiography No Bed of Roses, although her ex-husband William Dozier scathingly suggested the title should have been No Shred of Truth. Back in 1946, the already strained relationship between the sisters received a fatal blow when Joan made an insulting remark about Olivia’s husband Marcus Goodrich. OLivia demanded an apology or she would never speak to Joan again. There was no apology, not then – not ever. When Olivia won her first Oscar, in 1947, Joan was a presenter. When she tried to offer her congratulations, Olivia snubbed her in front of the whole gathering. Whereas Olivia refused to discuss their feuding, Joan was quite candid about it, convinced everything was her sister’s fault. She also insisted that it began when they were children, with Olivia’s instant resentment at having to share their parents’ affection with a younger sister. Joan said this was carried on into their teenage days of hair-pulling and clothes-tearing, and beyond.

As life would have it, Joan married before Olivia and won an Oscar before her. ‘Olivia has always said I was first at everything’, Joan commented in a 1978 interview. ‘If I die, she’ll be furious because, again, I’ll have got there first.’ Joan passed away in December 2013 aged 96 – and Olivia is still going, living quietly in France as I write. As for screen accomplishments, well, Joan won a single Oscar and was nominated twice more. Olivia won two and was nominated three further times. Away from the screen Joan was a licensed pilot, a champion balloonist, a hole-in-one golfer, and a cordon bleu chef. Olivia demonstrated a flair for writing in 1962 when she penned Every Frenchman Has One. At the time of Joan’s death (in 2013 at 96), she and Olivia had still not reconciled.

Olivia in her later years

Joan’s final comment on their relationship: ‘We’re getting closer together as we get older, but there would be a slight problem of temperament. In fact, it would be bigger than Hiroshima.’ That tore it.