Hollywood movie stars are prone to luck, good and bad, just like the rest of us. My research has found over sixty actors and actresses who have been killed in accidents involving automobiles, airliners, drownings, genuine accidental overdoses, fires, skiing, even earthquakes. Some have been electrocuted, others accidentally shot themselves or choked to death on food. By far the biggest group, however, relates to motor vehicle accidents, so I shall deal with them first, alphabetically and in two parts. Here is part one.

in The Flight of the Phoenix

This Scottish character actor enjoyed his greatest success in the 1965 film The Flight of the Phoenix, in which he played ‘Crow’ and was Oscar-nominated. A year after making Waking Ned Devine (1998) he was killed in a car crash in Scotland at the age of 71, a passenger in a vehicle driven by his wife of 23 years.

Without doubt, the most famous Hollywood car crash victim would be James Dean. I have written quite a large piece on him in this blog, so suffice to say he died in his Porsche Spyder when it collided with another vehicle near Cholame, California in 1955. According to his mechanic, Rolf Weutheric, (he survived the crash), Dean’s last words were: ‘That guy’s got to stop…he’ll see us.’ Incidentally, Rolf would die in a similar crash 20 years later. Poor Dorothy had the world at her feet when a car accident claimed her at 19. She had won the Miss New Orleans beauty title at 15, appeared in the Ziegfeld Follies of 1931 in New York City, played opposite the world’s number one star Shirley Temple in Little Miss Marker (1934), and had just signed a long-term contract with Paramount. Only recently had she become engaged, and was busy planning her wedding in the days leading up to her death. At around  1.00am, 8 June 1934, her date slammed his car into a tree and Dorothy died instantly. Shirley Temple had gotten very close to her during the making of Little Miss Marker and was distraught when told of her death.

as Joey in Shane

Although he did a lot of television work, plus a few movies, Brandon will be forever remembered as the little boy Joey who idolized gunfighter Alan Ladd in George Stevens’ brilliant western Shane (1953). He even scored an Oscar nomination for his performance. He was on his way to visit his wife in hospital when his camper van collided with a construction truck. He became trapped in the wreckage for some time and died of his injuries later in hospital.

with Omar Sharif on the set of Genghis Khan

The sister of French superstar Catherine Deneuve, Francoise had already established herself as a cinema actor well before her sister gained prominence, having already starred opposite Omar Sharif in the 1965 blockbuster Genghis Khan. Francoise was as stunning as her sister, and on the threshold of a strong international career when she rolled her sports car in a French field in June 1967. It caught fire and she burned to death.

Her film career never amounted to much, but there was no doubting Claudia Jennings’ beauty and appeal to the opposite sex. She starred in the best forgotten Gator Bait (1974), appeared uncredited in David Bowie’s The Man Who Fell To Earth (1976), then narrowly missed out on becoming Kate Jackson’s replacement in the hit TV series Charley’s Angels that same year. Some say her four spreads in Playboy magazine made executives a bit skittish about putting her into a major hit, particularly since she had also been crowned Playboy Playmate of the Year for 1970. Claudia had just overcome a drug and alcohol problem when she fell asleep at the wheel of her VW convertible and collided head-on with a van. She died a few minutes later before paramedics arrived at the scene. An autopsy revealed no trace of alcohol or drugs in her system. 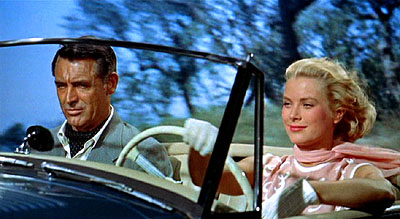 with Cary Grant in To Catch a Thief

If James Dean was the most famous male actor to die in an automobile accident, then Grace Kelly was certainly the most famous female. The Princess of Monaco lived the fairy tale, from Oscar-winning actress possessed of enormous beauty and personality, to marrying a European prince and spending her life in luxury. Sadly for her, it all ended on a precipitous stretch of road in Monaco on 14 September 1982 when the 52 year-old mother of three probably had a seizure of some kind while at the wheel. The vehicle plunged down a steep incline and landed upside down. Rumours that the accident took place on the spot where she and Cary Grant stopped for lunch in To Catch a Thief (1955) are simply untrue. It was not even the same road in fact. Between 1950 and 1955 Percy and Marjorie Main starred in seven Ma & Pa Kettle comedies, inspired by their supporting roles in a 1947 comedy titled The Egg and I. For some reason the public took to the hillbilly couple and the series of features made a lot of money for Universal studio. They might possibly have gone on making the studio a packet, but Percy had the misfortune to be struck by a car while walking through his neighbourhood with a friend one evening. The friend was killed instantly. Percy died later from head injuries.

in North to Alaska

Ernie was a very funny comedian, popular on both TV and in the movies. He memorably played the villain in John Wayne’s 1960 western North to Alaska, in which he has a very funny scene involving his trademark cigar. In fact, the accident that killed him probably happened because he tried to light up by striking a match on his shoe while he was driving. He always said cigarette lighters spoiled the taste of a cigar, so he refused to use them. Police said his aversion to them probably cost him his life Twenty years later his daughter, Mia, died in an auto accident as well. as ‘Froggy’ in Our Gang

The final batch of short films featuring the highly popular Our Gang were made between 1940 and 1944, and among its many fabulous child actors was one Billy Laughlin, better known by his ‘Our Gang’ persona ‘Froggy’. He naturally possessed an extraordinary, guttural voice, although many fans thought he had to be miming. Sixteen year-old Billy was delivering newspapers on his motor scooter in August 1948 when a speeding truck hit him and killed him.