that brilliant moment in ET

Yet another Californian, this time from Culver City, where she was born in 1975. Drew stormed into cinema fame at the tender age of 7 when she played Gertie in Spielberg’s ET – The Extra-terrestrial. Since then she has established herself as a player of substance, despite weathering a history of drug issues, alcoholism and partying in general that threatened to ruin both her reputation and her name. All that is in the past now, and she even picked up a Golden Globe for her performance in the TV mini-series Grey Gardens in 2010.

Culkin is a native New Yorker, born there in 1980. When Home Alone hit the screens in 1990 nobody expected it, or its juvenile star, to be the phenomenon that this rather average comedy became. For some reason it struck a chord with cinema-goers around the world, so much so, that overnight Macaulay Culkin became the most recognized face on the planet. Home Alone 2 and a few other less successful features followed in rapid succession until 1994, at which time he suddenly grabbed his money, got married, and took a nine year hiatus from movie-making.

in How Green Was My Valley

A Londoner, Roddy made his screen debut at 10 in a small British film made in 1938 called Murder in the Family. Before celebrating his 20th birthday, he had appeared in another 29 movies, among them the highly acclaimed How Green Was My Valley in 1941. Also, during the war, he made My Friend Flicka and starred opposite newcomer Elizabeth Taylor in her breakout film Lassie Come Home, both made in 1943. He and Liz became lifelong friends. In all he made 150 movies in a long career, and is remembered by all who knew him as the kindest of men. It was said after his death in 1998 that he had not a single enemy in Hollywood.

in War of the Worlds

Born in Conyers, Georgia in 1994, Dakota Fanning tasted success very early in her acting career, becoming the youngest actor ever to be nominated for a Screen Actors Guild award (SAG), in just her second film, I am Sam (2001). Before long she found herself starring alongside such cinema luminaries as Robert De Niro, Tom Cruise and Denzel Washington. As a child actor she often played precocious young girls who were generally smarter than their elders. Premieres for War of the Worlds (2005) took her to Paris, London and Tokyo, in the company of the star Tom Cruise, all before her 10th birthday. with Toto in The Wizard of Oz

Born Frances Gumm in Grand Rapids, Minnesota in 1922, Judy Garland became one of the most famous and recognizable faces on Earth in the 1930s, thanks mostly to her playing Dorothy in The Wizard of Oz (1939). That fame, if anything, actually increased in the war years when she played opposite Mickey Rooney in a number of teenage musicals, the ‘let’s put on a show’ variety, that captivated audiences around the globe. Her rich voice and the unique way she delivered a tune placed her in a sphere all to herself, but the constant fame, massive workload, and the studio’s (and her own mother’s) decision to keep her going by popping a multitude of pills, finally took their toll. This tiny dynamo of an entertainer (she was under five feet tall) died from a barbiturate overdose in London in 1969. She was only 47.

I placed Mickey Rooney and Judy Garland on a par, both at number 6, since they acted together in a lot of pictures, each one complimenting the other. Mickey hailed from Brooklyn in 1920, and was performing pretty much from the moment he could walk, beginning in his parents’ vaudeville act when he was still 7 months shy of his second birthday. Throughout much of World War 2 he was number one at the box-office, courtesy of his Andy Hardy family movies and his musicals with Judy. When he died in 2014 he was the only surviving star from the silent era. 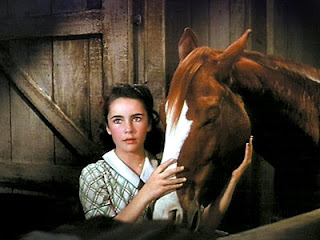 with ‘The Pie’ in National Velvet

There has probably never been a movie actress to excel Elizabeth Taylor when it comes to sheer exquisite beauty. Even as a young girl her naturally violet eyes captivated all who met her. Nearly a quarter of the names on this list were born in London, including Liz (in 1932). Her folks were actually Americans visiting the city to set up an art gallery there. Seven years later, as war clouds gathered over Europe, they took Elizabeth back to America. By 1942 she had made her first film, but it was her second, Lassie Come Home, a year later, that put her on the road to fame and fortune. Then, in 1944, she starred in National Velvet with Mickey Rooney, which was a phenomenal success everywhere. She would ultimately go on to collect two Oscars in her lifetime – and no fewer than eight husbands.

Jodie was born in Los Angeles in 1962, three years after her parents divorced. She says she was conceived when her mother visited her father in search of child support. After making commercials for Coppertone sunblock, Jodie scored her first TV appearance at five and her first film role at 10. Her acting talent was immediately apparent. Before long she was starring for Disney and others, in demand on both big and small screen. Her performance portraying a prostitute in Taxi Driver (1976), when she was barely 13, raised eyebrows, but also garnered critical acclaim. It also inspired John Hinckley to attempt to kill President Ronald Reagan – just to impress her! It won her an Oscar nomination as well. To nobody’s surprise, she has since gone on to become one of the cinema’s outstanding actresses, the winner of two Oscars and three Golden Globes. in Down to the Sea in Ships

Yet another actor born in Los Angeles, California (1936), Dean Stockwell was responsible for the most impressive acting performance I have ever seen from a young boy. He was 12 years old when he made Down to the Sea in Ships (1949) with Richard Widmark and Lionel Barrymore, and his intelligent, extremely likeable portrayal has never dated. Dean only made 18 movies as a juvenile, but he rarely put a foot wrong in any of them. His adult career never amounted to much, which is surprising given his extraordinary start, but that often happens with child stars. in Meet Me in St Louis

Margaret was born in San Diego, California in 1937. If Dean Stockwell was my favourite male child actor, then Margaret O’Brien got the nod as my favourite female. She was sensational in everything she did, the greatest scene-stealer in the history of the cinema – bar none. I do not doubt for one moment the oft-repeated tale that, when asked to cry in a particular scene by her director, she famously inquired: ‘When I cry, do you want the tears to run all the way, or shall I stop them half-way down?’ I’ll bet she could do it, too. Her duet with Judy Garland, singing and dancing ‘Under the Bamboo Tree’ is still one of my favourite musical moments in movies. She even upstages Garland. Historically, there really was no contest for the number one spot on this list, but little Margaret O’Brien has always been my personal favourite. A native of Santa Monica, California (1928), Shirley Temple remains to child acting what Michael Jordan is to basketball, Babe Ruth to baseball, and Don Bradman to cricket. She has no peer, and will probably never have one. Throughout the 1930s she was an industry all by herself, the most loveable child in existence who ‘wowed’ everyone with her ability to perform before the cameras at such a young age. She truly was remarkable. There were stories (maybe true, maybe not), that she was precocious and big-headed off-screen, but not once was this apparent in her on-screen persona, so I am inclined to think that jealousy may have driven much of the criticism. Unlike most child stars, she showed signs of possibly becoming a fine leading lady as she grew up, but that was not to be. In 1949 she retired from movies. She was 21.

Of the 22 child stars listed here, 7 were born in California, 5 in London and 3 in New York City.