This series starred Jeffrey Hunter as the real-life 19th century Texas lawyer Temple Lea Houston, son of the legendary Sam Houston. Unfortunately, the producers seemed unsure of just how they would approach the format. It only ran for a single season on NBC from 1963 to 1964. Perhaps, it could have lasted longer if the network had been able to settle on a format that was at least consistent. The show is considered to have been the first attempt to produce an hour-long western series with its main character being an attorney, a kind of ‘Perry Mason out West’, so to speak.

The real Temple Lea Houston (1860-1905) was a circuit-riding lawyer but there was little to bind the episodes together under a common framework. One episode might be played out in a courtroom (along Perry Mason lines); the next might see Temple gathering evidence, more like a detective than a lawyer; a third might have a totally humorous, light-hearted theme like, for instance, an episode titled ‘The Law and Big Annie’, in which our hero uses his legal expertise to help a friend decide what to do after he inherits an elephant! Because two of Houston’s children were still living when the series went to air, the producers tried to avoid storylines that might embarrass them. No wonder it lasted only one season. Producers could not make up their minds what they wanted it to be.

The series was also hastily conceived from the start and thrown together in a slip-shod manner. The pilot episode was deemed unusable as an introduction to the series because James Coburn, (who played a secondary character, a gunslinger turned US Marshal), refused to accept a role in the series that might tie him down. His character was hence assumed by Jack Elam as George Taggart. Jack Webb was Head of Production at Warner Brothers Television when he issued orders that episodes were to be put together in two or three days each, a time frame generally considered impossible in the industry at that time.

As the series star Jeffrey Hunter would recall years later: ‘In the first place, we had no time to prepare for it. I was notified on July 17 to be ready to start on August 7 for an October air date. When we reached the screen we did not have a single segment ready. It was done so fast the writers never got a chance to know what it was all about. We all wanted to follow the line indicated by the pilot film, which we thought would make a charming series. NBC, however, favoured making it serious.’ Consequently, by December 1963, the series was rated 31st of the 32 new shows that season. NBC belatedly ordered a switch back to a more humorous format but it was too late to save the show.

The real life fates of both Temple Lea Houston and the actor who portrayed him here were tragically similar. Houston had celebrated his forty-fifth birthday a mere three days before he succumbed to a brain haemorrhage in 1905. Jeff Hunter was just forty-two when he suffered a fall at home in 1969. The fall apparently triggered a stroke that resulted in him having to undergo brain surgery that proved to be unsuccessful. 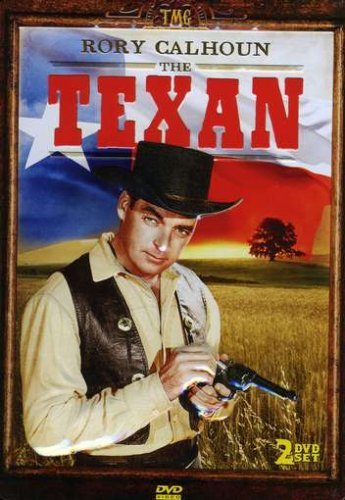 The surprising aspect of The Texan was that, despite its commonplace storyline, it lasted seventy-nine episodes. The hero of the series is a gentleman named Bill Longley, a Civil War veteran who just happens to be the fastest gun in the West. He roams from town to town, not looking for trouble yet finding it week after week. Hardly an original premise. Longley is a former captain in the Army of the Confederacy who rides around on his pinto horse named ‘Domino’, and helps people in distress, not just in Texas but all over the West. Rory Calhoun portrays him here.

It should be pointed out that the fictional Bill Longley has nothing to do with the real life Longley. The real guy killed his first man in 1866 when he was just fifteen years of age. The American Civil War ended in 1865, so unless Bill was the youngest captain in history, we are talking about two different people. In fact, the Longley of history was hanged in Giddings, Texas in 1878. Calhoun’s fictional Longley is a man of many parts – boss of a cattle drive in one adventure; a railroad construction supervisor in another and in pursuit of a Mexican bandit in yet another. The show could have returned for another season but Calhoun wished to get back to starring in ‘B’ movies and withdrew from the series.

I can still recall the theme song to this series:

Whistle me up a memory;

Whistle me back where I want to be;

Whistle a tune that’ll carry me – to Tombstone Territory. 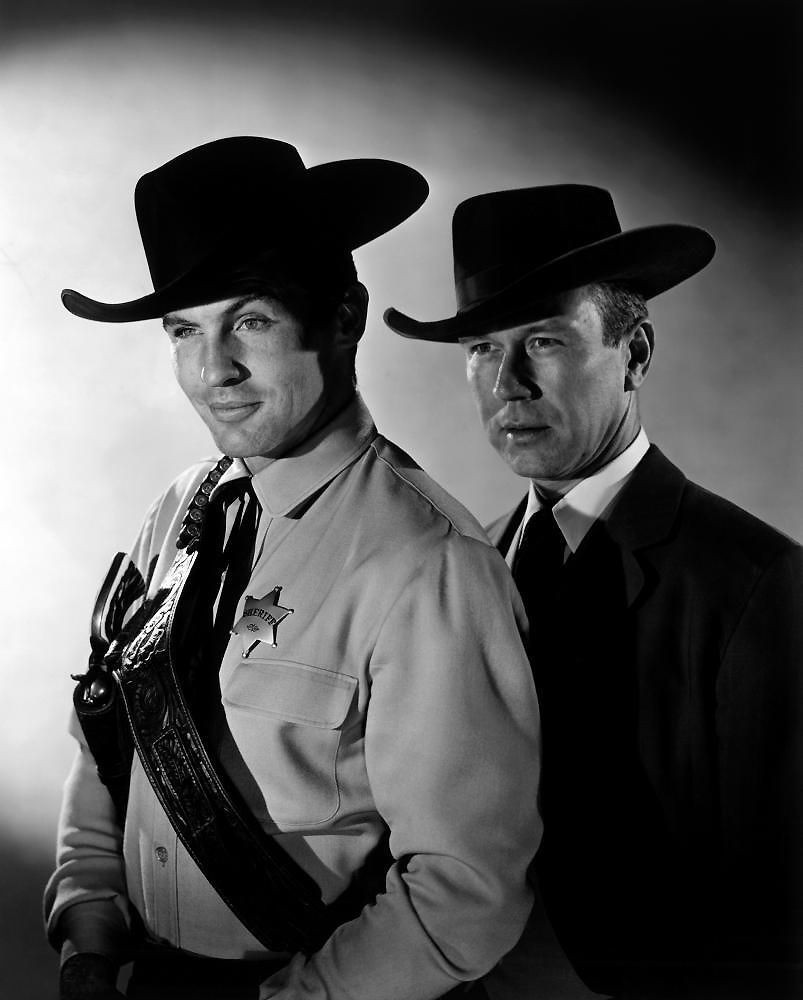 The star of the show was Pat Conway (the grandson of silent screen star Francis X. Bushman), who played Sheriff Clay Hollister. Richard Eastham portrayed Harris Claibourne, the fictional editor of the local newspaper The Tombstone Epitaph. The producers, it seems, were not overly concerned with history, as is evidenced by the narrator (Eastham) claiming at the start of each episode that we are about to see a re-enactment of: ‘An actual account from the pages of my newspaper, The Tombstone Epitaph. This is the way it happened…in the town too tough to die.’ Not so. Each episode dealt with fictional individuals despite the town of Tombstone being the site of the famous ‘Gunfight at the OK Corral’ in 1881 when the Earp brothers and Doc Holliday took on members of the Clanton Gang. Just to confuse us even more, at the end of every episode they state ‘any resemblance to any character, living or dead, is coincidental.’ It would be nice if they could make up their minds one way or the other.

By most accounts it appears that Pat Conway was a pretty nice guy. My childhood chums and I, however, almost unanimously arrived at the conclusion he was ‘up himself’. I mean, he was the cleanest western hero on television – and he wore his six-guns slung low and his holsters tied to his legs! We thought he was an ‘imposter’ and so far removed from our number one western TV hero – the one and only Bret Maverick (James Garner). Tragically, Pat died aged fifty in 1981. Cause of death was attributed to renal failure and dehydration, as a consequence of chronic alcoholism.