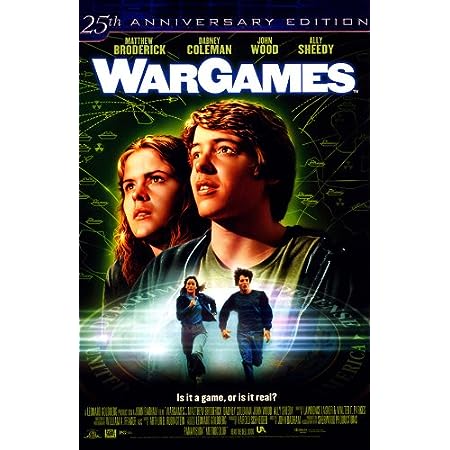 This intriguing and highly entertaining film is largely due to the excellent performance by 20 year-old Matthew Broderick in only his second film. Faced with choosing between this picture and the Alex Keaton role in the TV series Family Ties, he picked the movie and Michael J. Fox landed Family Ties. He easily convinced us he was high school student (David Lightman), despite his age, an illusion he repeated three years later when he made Ferris Bueller’s Day Off in 1986. The plot of Wargames revolves around computer whiz-kid Lightman, who accidentally connects to a top secret super-computer, War Operation Plan Response (WOPR), at the North American Aerospace Defence Command (NORAD), one that has total control over America’s nuclear arsenal. When the computer challenges him to a game between the USA and the Soviet Union, he chooses ‘Thermo-Nuclear War’, unaware that what he believed was to be a game was actually the real thing, thus placing the two super-powers in a headlong dash towards World War Three. When he realizes what is happening he tries to tell the super-computer that they are engaged in a ‘game’, not the real deal. WOPR’s response: ‘What’s the difference?’ sets the scene for a nail-biting countdown.

The producers of Wargames were not allowed into the actual NORAD command centre, so they used their imagination and, at a cost of one million dollars, created a NORAD set of their own. In fact, it was actually far more elaborate than the real command centre. Director John Badham called their creation, ‘NORAD’s wet dream of itself.’ Incidentally, until 1992, NORAD only detected threats to US air-space. Any responses to those threats were handled by Strategic Air Command (SAC). On November 9, 1979, data on a training simulation tape concerning Soviet sub launches was accidentally fed into the NORAD computer warning system, causing the US military complex to go on high alert for six minutes, a clear indication that mistakes and accidents can and do happen. Training simulations were soon moved off NORAD after this incident.

The Lightman character was inspired by real-life hacker David Scott Lewis, a man who is not permitted to discuss whether or not he ever hacked into a military computer. Hacking, in fact, was not even illegal when this film came out. The Computer Misuse Act of 1990 would make it so. Lewis, however, was not the only inspiration for this movie. The writer’s main inspiration for the character Professor Stephen Falken was none other than Cambridge Professor Stephen Hawking. When asked to appear in the film, Hawking declined because he did not want his disability to be exploited. Prior to that, the writer initially had ex-Beatle John Lennon in mind to portray Falken.

The scene in which WOPR wrestles with winnable outcomes in a 3 X 3 game of Tic-Tac-Toe is just Hollywood hokum. Even the slowest early 1980s era personal computer would be able to enumerate all the unique positions in the game, (there are so few), within seconds, and thereby immediately arrive at the conclusion that the game was unwinnable. In truth, it is indeed possible to win or lose a game of Tic-Tac-Toe, but only if the players make illogical choices, such as not going for the centre square first. 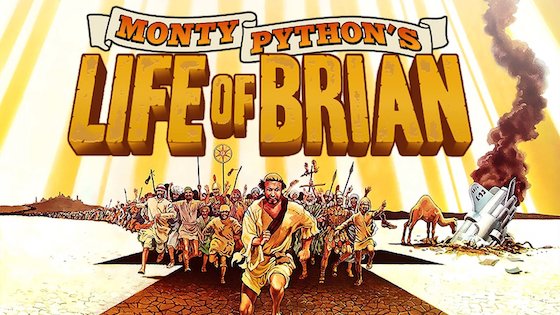 The Monty Python crew set the religious world a-buzz when they chose to parody first century life by having Brian of Nazareth born (on the same night) in the stable next door to the one that allegedly welcomed Jesus into the world, then having him mistaken for the Messiah for the rest of his life. The picture is now rated a classic comedy but not by everyone. Norway, for instance, banned it for a year, for ‘blasphemy’, before giving it an ‘18’ rating that included a warning from the censors at the beginning. The Swedes attempted to cash in on this publicity by marketing the picture as, ‘The film that is so funny it was banned in Norway!’ The Irish banned it (also for blasphemy) until 1987! Torbay Council, Devon, England, would not allow it to be screened until September 2008, while Aberystwyth, Wales, took until 2009 to lift its ban. And it took the English town of Bournemouth until 2015 to do likewise! In order for the film to receive an ‘AA’ Certificate by British censors, thereby allowing audience members over 15 years of age entry to the cinemas, the word ‘cunt’ had to be removed from the scene in which Reg (John Cleese) abuses Brian. The word ‘Klutz” was overdubbed. However, individual town boards could still ban the picture in their jurisdictions. And several did.

Graham Chapman (Brian) greets the day – and the crowd

There is a scene in the film in which Graham Chapman (as Brian) appears stark naked in front of a huge crowd of about two thousand people. After the first take, director Terry Jones pulled him aside and, referring to him being uncircumcised, said, ‘I think we can see that you’re not Jewish.’ It was corrected in subsequent takes by the use of a rubber band. To the surprise of many (it certainly surprised this writer), the opening song was not sung by Shirley Bassey at all, although it certainly sounded like her. The vocalist is Sonia Jones and – astonishingly – she was just sixteen years old when she recorded it! 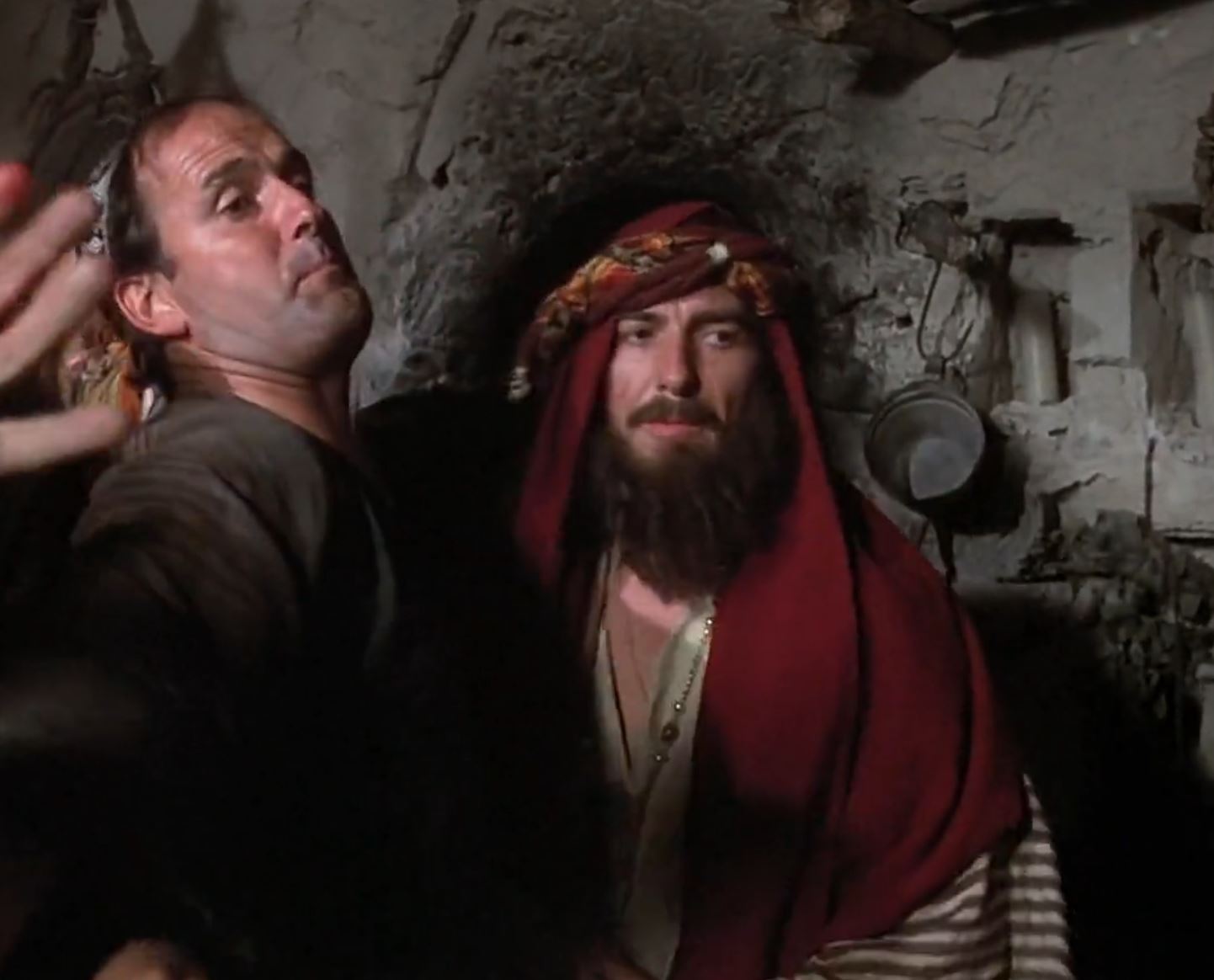 EMI originally financed the picture but backed out when they deemed the script to be blasphemous. The Python crew and EMI settled out of court. Beatle George Harrison created ‘Handmade Films’ and ‘pawned’ his London home and his office building to raise the four million pounds needed to make the film. When asked why he did so, he replied, ‘Because I want to go see it.’ A huge Monty Python fan, he thought it might be his last chance to see another Python film. Another pop icon, the legendary drummer for The Who, Keith Moon, was slated to play a street prophet but died before he could do so. The published version of the script is dedicated to him. John Cleese wanted George Lazenby to play Jesus. He thought it would make a hilarious tagline: ‘George Lazenby is Jesus Christ!’ Unfortunately, George was overseas working on another project. 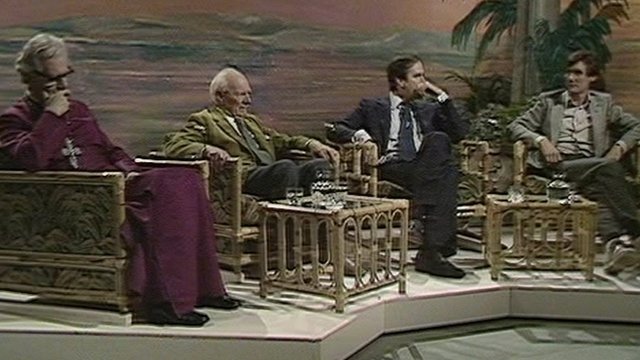 Shortly after the film’s release, the BBC talk show, Friday Night, Saturday Morning, hosted a televised debate between Cleese and Michael Palin on one side, versus the Catholic Bishop Mervyn Stockwood and Christian convert Malcolm Muggeridge on the other. Tim Rice, who had composed the lyrics to ‘Jesus Christ Superstar’, has the host. Stockwood and Muggeridge attacked the film as, ‘a little squalid number’, ‘tenth-rate’, ‘buffoonery’, and ‘unworthy of an educated man’. In one tense exchange between Muggeridge and Cleese, the former affirmed his position that Christianity had provided the most good in the world. Cleese responded with, ‘You mean like the Spanish Inquisition?’ Stockwood haughtily dismissed Cleese and Palin with: ‘You’ll get your thirty pieces of silver!’ 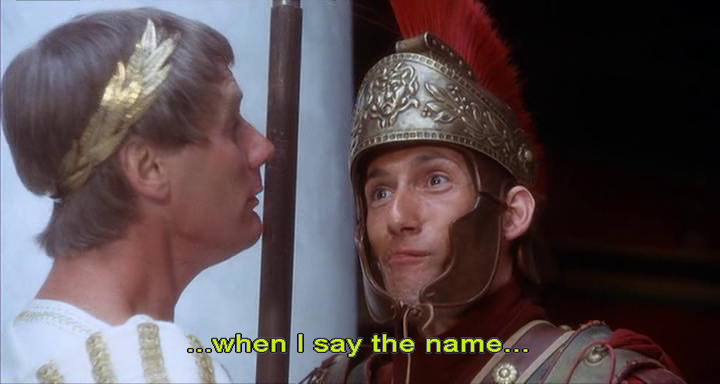 Michael Palin and a centurion in the ‘Biggus Dickus’ scene

One of this movie’s funniest scenes is the ‘Biggus Dickus’ scene. Featuring Cleese, Palin and Chapman, it was rehearsed many times the day before the actual shoot, with other extras playing the Roman centurions. On the day of actual shooting, however, they were all replaced by a new group of extras who had no idea what Palin would be saying to them. The group were instructed not to react in any way to his words. The result is priceless. The centurions do their utmost to keep straight faces as Palin spouts his hilarious lines, often nose to nose with them. Even he desperately tries to stifle a laugh at one point! The whole scene was shot in just two takes. 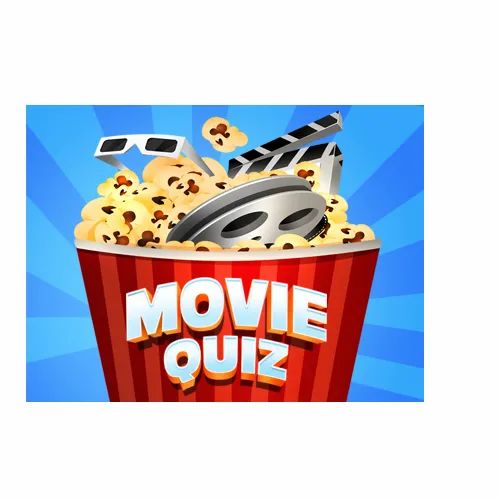 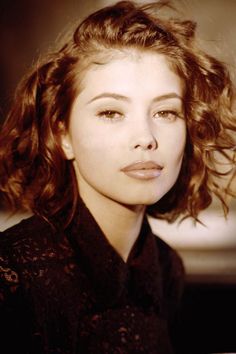 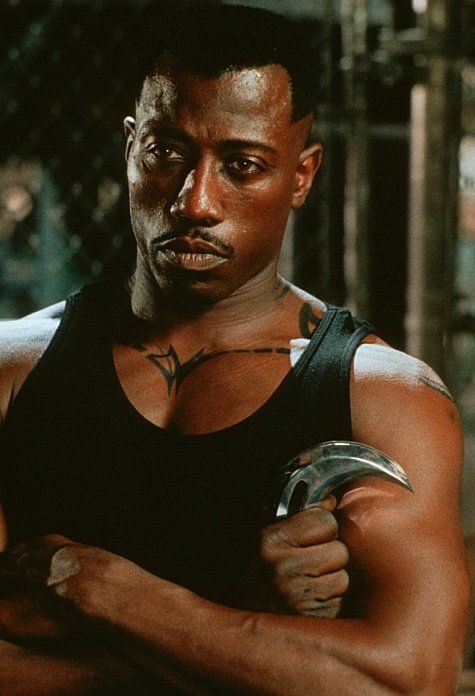 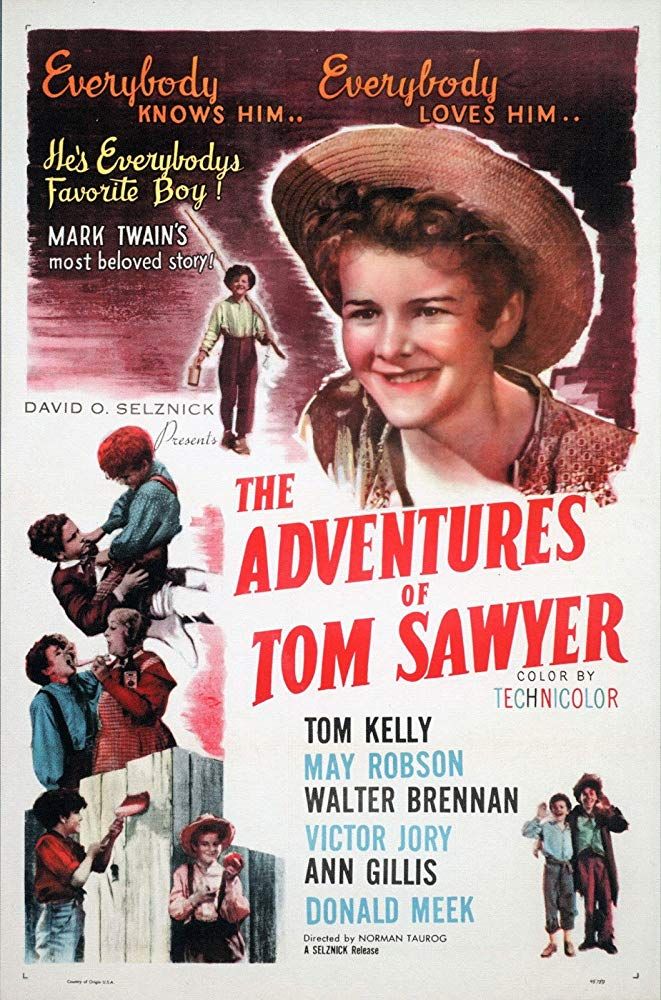