I have an unashamedly enormous admiration for New Yorker screenwriter Aaron Sorkin’s work. His most notable achievements in television and movie scripts are indeed impressive. He wrote the Broadway play A Few Good Men and adapted it into a movie screenplay in 1992. The American President (1995) is another of his wonderful screenplays; Charlie Wilson’s War (2007) and Malice (1993) are others. He was also recruited to polish the screenplays for Schindler’s List (1993), The Rock (1996), Excess Baggage (1997) and Enemy of the State (1998). Sorkin’s TV credits include (among others) The West Wing (1999), Sports Night (1998) and The Newsroom (2012). 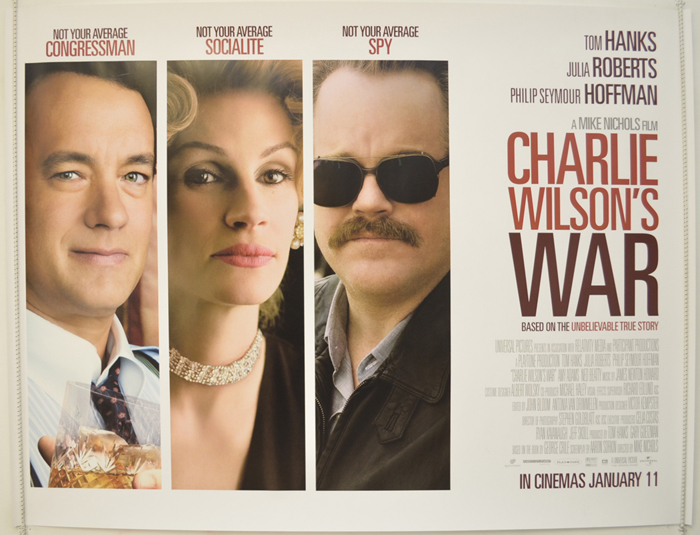 Based on a real story, this film is about real-life US Congressman Charles Wilson of Texas (played by Tom Hanks), who uses his position on an Appropriations Committee (with unlimited funds) to covertly finance the Mujahedeen in Afghanistan, thereby enabling them to keep shooting down Russian gunships in the 1980s until the Reds are forced to withdraw their forces from Afghanistan. He is assisted by a maverick CIA agent named Gust Avrakotos (Philip Seymour Hoffman) and prompted by Texan socialite Joanne Herring (Julia Roberts).

In an early scene, the Mayor of Nacogdoches, Texas, visits Charlie’s Washington office and is struck by the composition of his staff working there. He questions the receptionist (Wynn Everett) about this:

Mayor: ‘It seems to me, looking around, that it’s almost all women working here, and that they’re all very pretty. Is that common?

Receptionist: ‘Congressman Wilson, he has an expression. He says: ‘You can teach them to type, but you can’t teach them to grow tits.’

The secretary’s response said much about the character of Charlie Wilson, as well as setting the mood for the film’s ‘tongue-in-cheek’ screenplay. Charlie was a womaniser, a drinker, and a man who used his position as a US Congressman to grant and receive favours when it suited him. But he was also a humanitarian, appalled at the brutality of the Russian troops in Afghanistan and deeply committed to doing whatever he could to end the suffering of the people of that unfortunate land.

Upon his return from an unsatisfactory meeting with the CIA’s station chief, Harold Holt in Islamabad, Charlie meets Gust Avrakotos for the first time:

Charlie: ‘I stood in Harold Holt’s office in Islamabad, and I offered him the keys to the safe. I said to him, ‘What do you need?’ And I was apparently annoying him.’

Gust: ‘Well, that’s because Harold Holt is a tool. He’s a cake-eater, he’s a clown, he’s a bad station chief, and I don’t like to cast aspersions on a guy, but he’s going to get us all killed.’

Charlie: ‘You mean to tell me that the US strategy in Afghanistan is to have the Afghans keep walking into machine-gun fire ‘til the Russians run out of bullets?’

Charlie: ‘What is US strategy?’

Gust: ‘Well, strictly speaking, we don’t have one. But we’re working hard on that.’

Gust: ‘Me and three other guys.’

Unsure if Charlie can deliver what he says he can, Gust discusses with him his record and general credibility as a US Congressman: 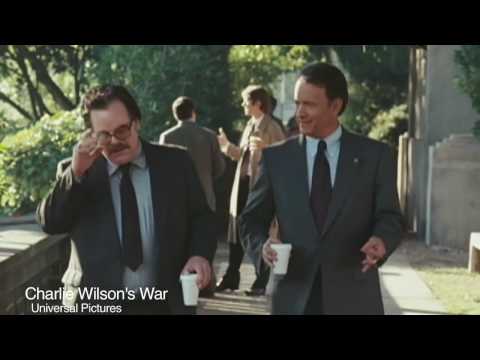 Gust: ‘Until the phone rang this morning, Charlie, I did not know you. I’d never heard of you.’

Charlie: ‘What’d you find out?’

Gust: ‘That your greatest legislative achievements in six terms, is getting re-elected five times.’

Gust: ‘That you hold more IOU’s than any member of the House.’

Charlie: ‘How about that.’

Gust: ‘You know, me and three other guys are killing Russians. Is it possible that I met the only elected official in town who can help me?’

Gust takes Charlie to meet with someone who is an expert on weaponry, especially that employed by the Russians in Afghanistan. Mike Vickers (Christopher Denham) is a 30 year-old who has written a full report on the situation. Gust quizzes him about the type of weapons the Mujahedeen will need to bring down the gunships: 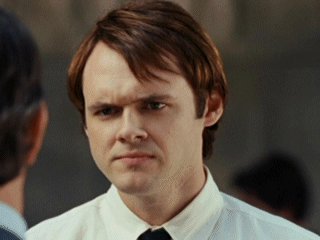 Gust: ‘The Swiss-made Oerlikon STA anti-aircraft cannon – that’s what you’d use to shoot down an MI-24 HIND gunship in the mountains, right?’

Vickers: ‘Well, the Oerlikon’s a good start, but the Russians would just start flying higher-altitude missions.’

Charlie: ‘What else do they need?’

Vickers: ‘Same thing they’d give us: AK-47s, AK-74s, AKMS. The soviets didn’t come into Afghanistan on a Eurail pass, they came in T-55 tanks. The fighters need RPG-7 anti-tank grenade launchers, Katyusha 170- millimetre rockets, wire mines, plastic mines, bicycle bombs, sniper rifles, ammunition for all of the above, and frequency-hopping radios and burst transmitters so these guys aren’t so fucking easy to find. I’ve written it all in a report you can read; you’d be the first one who did.’

Charlie travels to Pakistan to meet with the nation’s President Gia and two of his military advisors, to discuss ways and means of removing the Russian invaders from Afghanistan and alleviating the massive refugee numbers flooding across the border into Pakistan and Iran. Charlie’s assistant Bonnie Bach (Amy Adams) asks him how the meeting went:

Charlie: ‘It was like being slapped around by a three-man Pakistani vaudeville team. You know you’ve reached rock bottom when you’re told you have character flaws by a man who hanged his predecessor in a military coup.’

Gust meets Joanne Herring for the first time. She is the sixth richest woman in Texas, a devout Catholic who believes that divine intervention has enabled Charlie to survive a Senate investigation into his cocaine use:

Joanne: ‘He may be in trouble with the press, but he stayed out of jail. You don’t see God’s hand in this?’

Gust: ‘Well, reasonable people can disagree, but I don’t see God anywhere within miles of this. On the other hand, if you slept with me tonight, I bet you I could change my mind in a hurry.’

Joanne: ‘Are you a Catholic, Mr. Avrakotos?’

Joanne: ‘Still a Christian, though.’

Joanne: ‘May I ask what it is that I’ve done to make you dislike me, Mr. Avrakotos?’

Gust: ‘I like you just fine, Mrs. Herring. It’s just been my experience that when people with money and too much free time get involved in politics, pretty soon, I forget who it is I’m supposed to be shooting at.’ 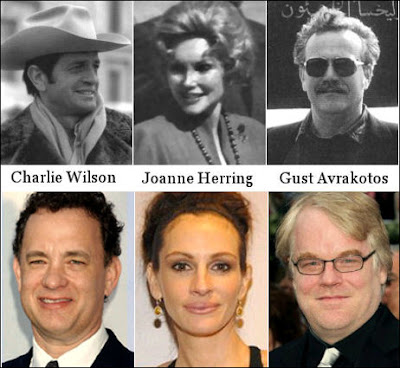 Sorkin has Charlie make a poignant observation about the USA’s record of intervention in Afghanistan, noting that America had gone into the conflict with good intentions, (but in secret), had helped oust the Russians, but then walked away just when the Afghan nation needed help to rebuild. Half the population was aged under fourteen, the country was in ruins and no-one was aware that it was the USA who had come to their aid against the Soviets. Charlie attempted to get similar funding to build schools and help the nation recover. Congress was no longer interested:

Charlie: ‘These things happened. They were glorious and they changed the world…and then we fucked up the endgame.’