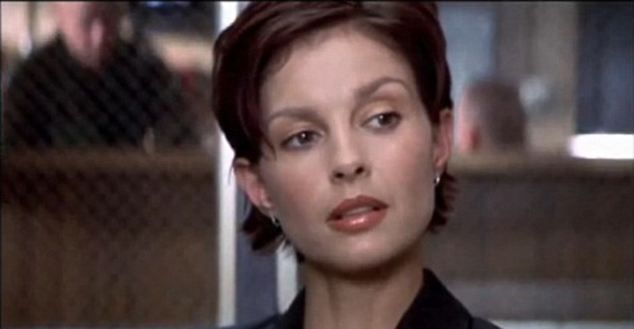 She was born Ashley Tyler Ciminella in Granada Hills, California in 1968. Her memoir, ‘All That Is Bitter and Sweet: A Memoir’ (2011) recounts tales of sexual abuse in her childhood, firstly at the hands of a local and well-known old man at a pizza place, and then by two appalling family members whom she refused to name. When her parents split when Ashley was a toddler, her mother moved a boyfriend into the family home, a man who was ‘a full-blown heroin addict with a criminal record’. His conduct and lifestyle did little to stabilize family life in the Judd household. But there was worse to come. In a 2015 article, she wrote of surviving being raped by two adult family members when she was still under-age and a child. One rape resulted in conception. ‘I’m very thankful I was able to access safe and legal abortion. Because the rapist is a Kentuckian, as am I, and I reside in Tennessee, I have paternity rights in Kentucky and Tennessee. [Otherwise] I would’ve had to co-parent with my rapist.’

Fast-forward to 2017 and Ashley became the first celebrity to go public (as reported in the New York Times on October 5), with her allegations of sexual misconduct against producer Harvey Weinstein during the making of Kiss the Girls. In April of the following year, she filed a defamation and sexual harassment suit against him, stating that the producer hurt her career by spreading lies about her after she rejected his sexual advances. Weinstein filed a motion to dismiss in July and a federal judge in California dismissed her sexual harassment claims in January 2019, but allowed her to pursue her defamation claim that Weinstein had sabotaged her career. Presumably, she is continuing with her suit as I write (August 2020). 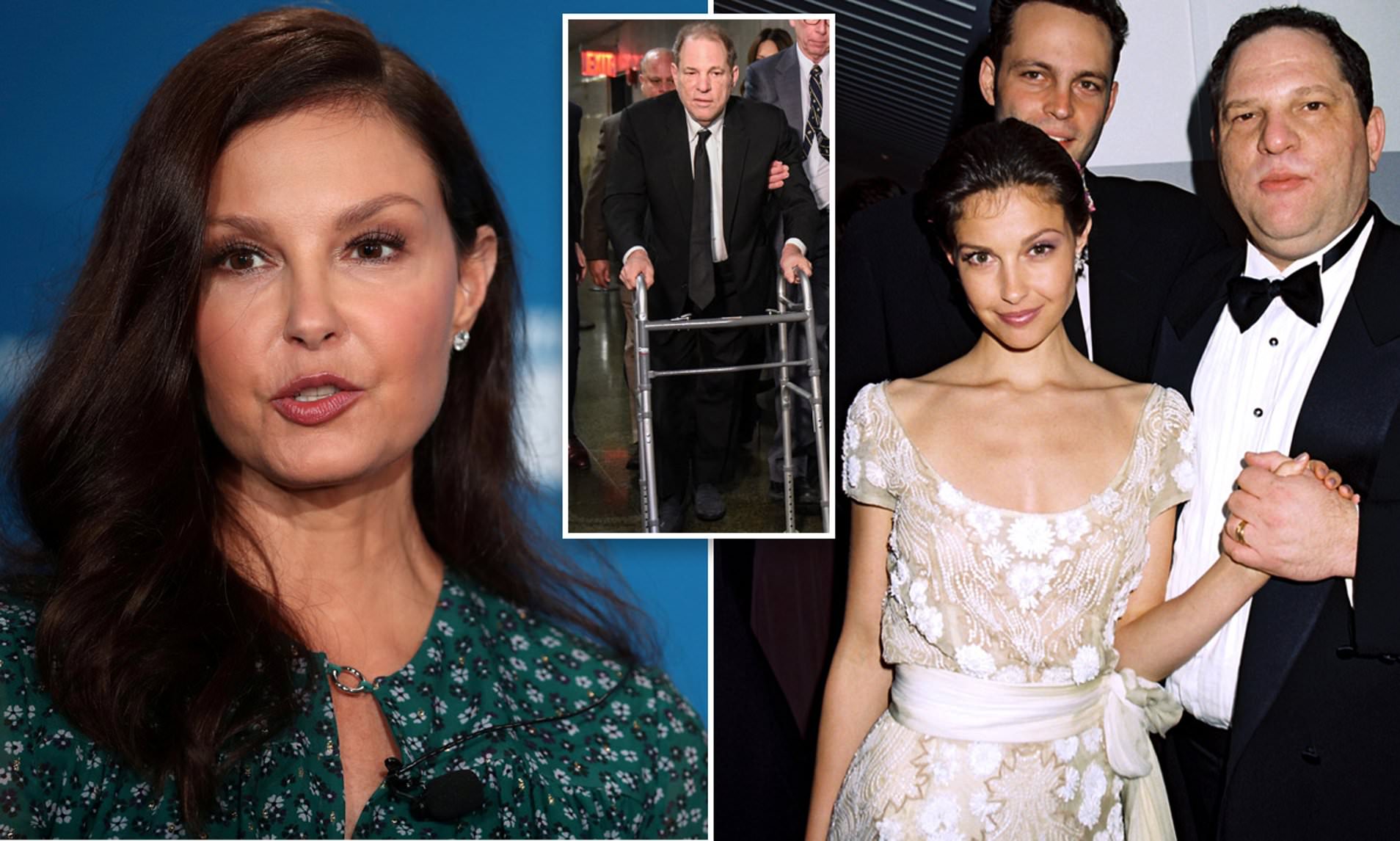 Since then she has openly spoken about the need for her colleagues in the movie business to confront sexual harassment. ‘We need to formalize the whisper network’, she says. ‘It’s an ingenious way that we’ve tried to keep ourselves safe. All those voices can be amplified. That’s my advice to women. That, and if something feels wrong, it is wrong – and it’s wrong by my definition and not necessarily someone else’s.’ Sexual harassment has been an integral part of the movie industry since the silent era. Fortunately, the Weinstein case has put the predators on their guard so, hopefully, things will change for the better.

Ashley was in middle school when her mother began living with a man named Larry Strickland, whom she later married. ‘Mom and pop were wildly sexually inappropriate in front of my sister and me’, she recalled, ‘…a horrific reality for me was that when pop was around I would have to listen to a lot of loud sex in a house with thin walls. I now know this situation is called covert sexual abuse.’ At times this unhappy situation led to the young girl contemplating ending her life. Happily, she was made of sterner stuff – and well she needed to be, for at the age of fifteen, when she was an aspiring model in Europe, she was raped by a man in France. ‘I am a survivor of sexual assault, rape and incest’, Ashley has since commented. ‘I am greatly blessed that in 2006, other thriving survivors introduced me to recovery. I seized it.’ 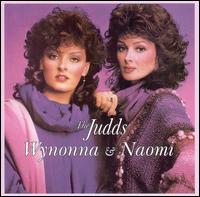 Ashley’s mother, Naomi, and her half-sister, Wynonna, are successful performing country music artists. It was only later in life that Ashley learned that her own father and Wynonna’s were not the same man. Naomi had fallen pregnant to a boyfriend and had pretended her husband was the father until being found out later. Meanwhile, Ashley furthered her education at 12 different schools in the 13 years prior to her attending the University of Kentucky, where she majored in French (she speaks it fluently). In 1990, however, the 22 year-old dropped out, (inadvertently assuming she was a few credits shy of graduating); choosing instead to try her luck as an actress in Hollywood. She would return 17 years later to the university and merely sign a paper to graduate and earn her Bachelor’s degree in French. 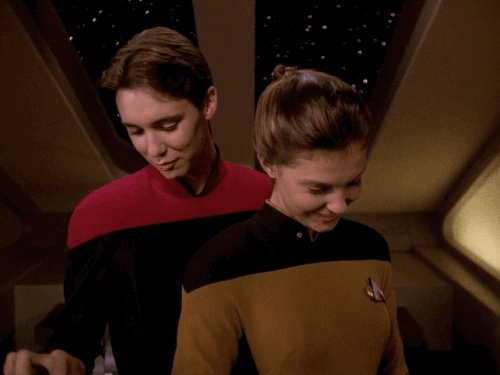 Ashley in a scene with Wil Wheaton in Star Trek: The Next Generation

Two years after arriving in Hollywood in 1990, Ashley turned down a large role in Kuffs (1992), because she was asked to do a nude scene, accepting instead a bit part that left her fully-clothed but un-noticed. ‘My mother worked too hard for me to take my clothes off in my first movie’, was her reasoning. Given her chequered childhood and family life, it is curious indeed that her mother has since voiced her displeasure with many of her famous daughter’s movies; primarily because of the profanity, nudity, sex and violence evident in them. Ashley’s first screen kiss, incidentally, was with Wil Wheaton on a 1991 episode of Star Trek: The Next Generation. Fans of the delightful Stand by Me (1986) will no doubt recall his starring role alongside River Phoenix in that picture.

In the decade preceding her marriage to Scottish auto racer Dario Franchitti, Ashley was reported to have been in at least ten serious relationships. There may have been occasional flings and encounters, but the major relationships involved the following:

Country singer Lyle Lovett (1991-2), prior to his two-year marriage to Julia Roberts. 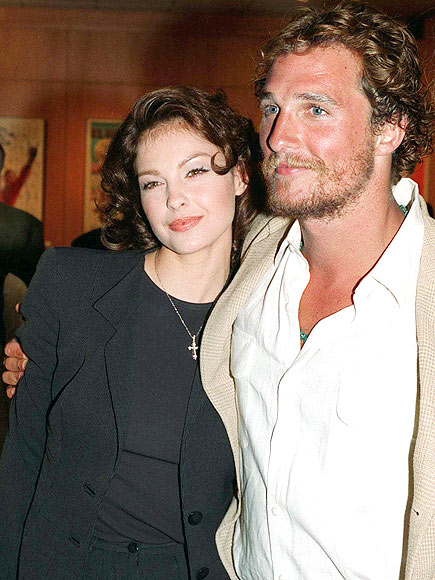 Actors Robert De Niro, Josh Charles and Matthew McConaughey were all in relationships with her (of varying length and at various times throughout 1995 and 1996). 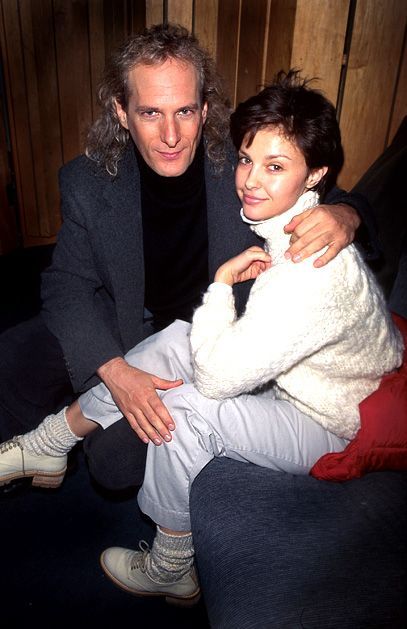 Singer Michael English dated her in 1995 and fellow singer Michael Bolton and Ashley were involved for over a year (1996-7).

It has been rumoured that other lovers may have included Jon Stewart, David Duchovny, and baseball player Brady Anderson.

She became engaged to Franchitti in December 1999 before marrying him in December two years later. The ceremony took place at Skibo Castle near Dornoch, in Sutherland, Scotland, the site of Madonna and Guy Ritchie’s betrothal a year earlier. Ashley’s husband would go on to win the Indianapolis 500 three times – in 2007, 2010 and 2012. In January 2013, however, the couple announced that they were divorcing. It was a mutual decision, apparently amicably arrived at. They had no children, almost certainly because Ashley is a dedicated anti-natalist. ‘It’s unconscionable to breed’, she reasoned, ‘with the number of children who are starving to death in impoverished countries.’ It is unknown how much her stance on this issue impacted on their marriage. Today, she is active and highly respected on the speakers’ circuit, giving speeches about gender equality, abuse and humanitarian topics.