How to Marry a Millionaire (1953) could have been a really good romantic comedy. But it wasn’t and that is a pity. It boasts the services of three extremely desirable Hollywood women in the leading roles, Betty Grable, Lauren Bacall and Marilyn Monroe, and all three are terrific. Whoever decided on casting Rory Calhoun, Cameron Mitchell and David Wayne as the male leads, however, could not have selected three less charismatic love interests. The romance falls flat because all three are as dull as dishwater. Possibly, most of the budget was used up on the ladies. William Powell gave the picture a touch of male class, but he was sixty by then and a little past his prime.

Marilyn with David Wayne in HTMAM

Lauren with Cameron Mitchell in HTMAM

Betty with Rory Calhoun in HTMAM

Betty Grable had been signed by 20th Century Fox back in October 1939 and her contract contained a clause guaranteeing she would always receive top billing in every film she made for the studio. So, even though she was approaching the end of her fine career, she was billed first in the credits for this picture. Marilyn, however, was later promoted to first place in the trailer and poster art. Not that this bothered the affable Betty in the slightest. She went out of her way to befriend and encourage Marilyn. ‘Honey, I’ve had mine’, she told the new screen sensation. ‘Go get yours.’ All three ladies got along fine on the set, despite gossip columnists’ desperate efforts to fabricate a feud between them. Bacall and Grable bent over backwards to help Marilyn on the set and even put up with the interfering behaviour of her voice coach Natasha Lytess.

William Horatio Powell was born in Pittsburgh, Pennsylvania in 1892. In 1907 the family moved to Kansas City, Missouri, and resided just a few blocks from the Carpenters, whose daughter Harlean would later move to Hollywood under her new name, Jean Harlow. She and Bill would not meet until both were established actors in Tinsel Town. He married Eileen Wilson in 1915 and, by 1922, was acting in Hollywood movies. He was successful in silent films, but his pleasant speaking voice was ideally suited when sound arrived and it led to him starring in The Canary Murder Case in 1929. He was soon on the way to stardom. 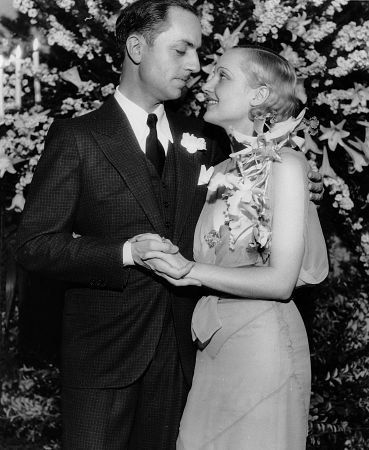 Off -screen he was a highly personable man, loved by all and extremely popular with his female leads. Actress Marion Shilling, who worked with him in Shadow of the Law (1930), described him as: ‘Self-effacing, deferential and exceedingly thoughtful of other people. He was one of the kindest human beings I have ever met. He sensed that I was in awe of him so, from the start, he did what he could to put me at ease.’ In June 1931, Bill married livewire actress Carole Lombard. The union lasted just two years but ended on amicable terms. Indeed, they would co-star in the delightful screwball comedy My Man Godfrey three years later. Powell was completely devastated by her tragic death in an air crash in 1942. 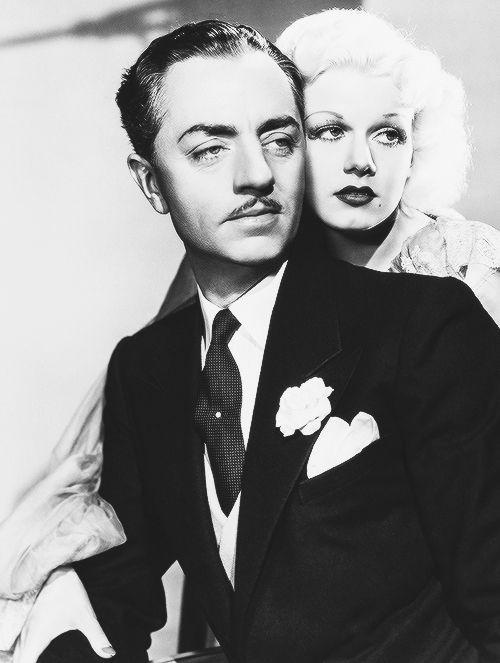 Publicity still with Harlow for Reckless (1935) 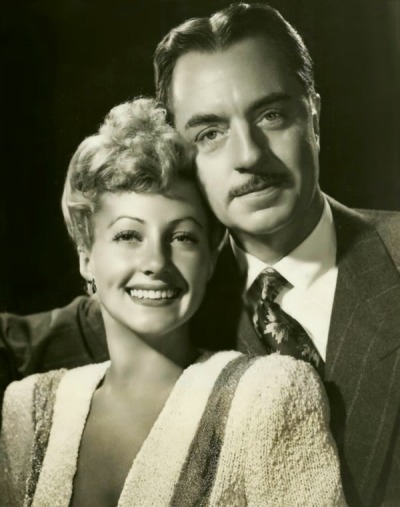 In 1935, he starred with Harlow in Reckless and the couple fell in love off-screen. When she suddenly died of uremic poisoning in June 1937, (not long before they were due to marry), he was shattered. At around that time he was diagnosed with cancer and underwent surgery and experimental radium treatment which happily put the disease in full remission inside two years. In 1940, after just a three-week courtship, he wed 20 year-old MGM contract actress Diana Lewis. It was a blissful union that lasted 44 years until Bill’s death in 1984 at the age of 91. Diana was an active supporter of women’s golf and the LPGA. The LPGA’s William and Mousie Powell Award is named in honour of the couple.

The Thin Man pictures with Myrna Loy and Asta

Today, William Powell is best-remembered for the fourteen films he made with Myrna Loy between 1934 and 1947, six of which were part of The Thin Man series, extremely popular romantic comedies that saw them portray husband and wife team Nick and Nora Charles. Many fans wanted to believe that Bill and Myrna were lovers off-screen as well but that was not so. They were simply good friends. Powell was a fine actor who was three times nominated for Best Actor Academy Awards – The Thin Man (1934), My Man Godfrey (1936) and Life with Father (1947) – but missed out on each occasion. 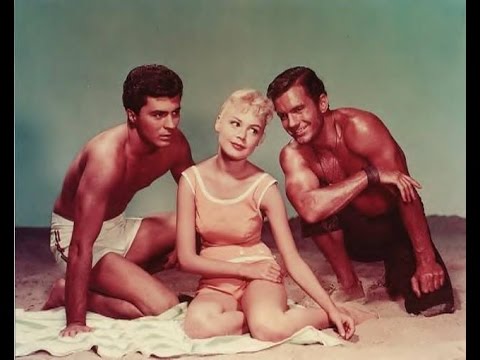 I was twelve years old when Gidget hit the screens in 1959. Did American surfers of the late fifties really speak that lame beach lingo? And those nicknames… Gidget, apparently, was short for ‘girl midget’. The other, curvy girls were labelled ‘beach bunnies’, which sounds a tad derogatory and sexist to me. Poor James Darren was saddled with ‘Moondoggy’ as his tag, while Cliff Robertson, a good surfer himself at La Jolla, California where he grew up, was cast as an elder statesman surfer dude called ‘The Big Kahuna’. 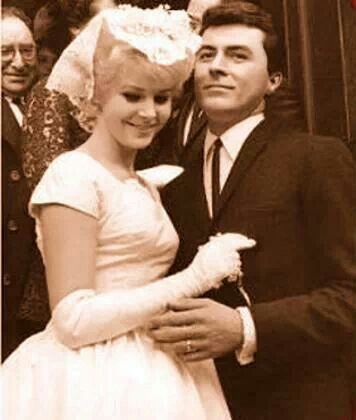 Darren was not an established pop singer at the time, so he cut a single for Colpix Records and it charted well enough for him to get the male lead in Gidget opposite Sandra Dee. Hailing from Philadelphia, Pennsylvania, he could not surf and was a weak swimmer, but these films would make him an icon of the teenage beach set. The normally hairy-chested Italian (his birth-name was Ercolini), had to submit to a full body wax that left him with a torso as bald as an egg. His first marriage ended in divorce in 1959, but he buttered up again in 1960, wedding beautiful Evy Norlund, the former Miss Denmark of 1958. They are still husband and wife as of May 2019.

1959 was a prolific year for Sandra Dee. The last big actress placed under contract by Universal Pictures, she appeared in five movies that year. Two of them, Gidget and A Summer Place, helped turn her into a teenage heartthrob for young boys across America. At 19, she gave birth to her only child, a son by her husband, singer Bobby Darin. Bobby died from heart issues in 1973 but he and Sandra had long since divorced over six years earlier. Their son, Dodd Mitchell, penned a book about his parents in 1994, in which he chronicled his mother’s anorexia, drug and alcohol problems. Diagnosed with throat cancer (she was a heavy smoker) and kidney failure in 2000, Sandra passed away in February 2005, two months shy of her 63rd birthday.