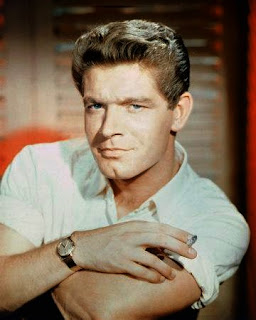 Stephen Boyd was born the youngest of nine children of a Northern Ireland family in 1928 and will more than likely become immortalized in cinematic history because of his memorable performance as Messala in the enormously successful 1959 blockbuster Ben-Hur. Charlton Heston may have secured the Oscar in the title role, but an awful lot of fans (and critics) found Boyd’s performance the better of the two. He won a Golden Globe for it but was not even nominated when the Oscars came around. 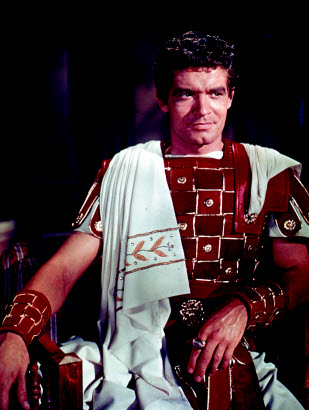 As Messala in Ben-Hur

When just a lowly doorman at a London cinema in 1952, Boyd almost died from influenza, yet within four years he had a 20th Century Fox contract and was placed in an excellent WW2 drama (based on an actual event) called The Man Who Never Was, and his career was off and running. American director William Wyler was greatly impressed by his performance, enough to convince Fox to loan him out to make Ben-Hur. Riding the crest of a wave, Boyd agreed to play Mark Antony in the 1963 film Cleopatra opposite Liz Taylor as Cleo and Peter Finch as Caesar. But when Liz fell seriously ill and production was delayed, both Boyd and Finch withdrew to fulfil other commitments and were replaced by Richard Burton and Rex Harrison.  Dick and Liz became a show on their own as they embarked upon the most publicized romance in Hollywood history. 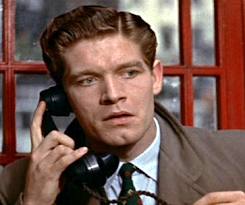 As a Nazi spy in The Man Who Never Was Two monumental flops – The Fall of the Roman Empire (1964) and Genghis Khan (1965) put paid to Boyd’s days as a leading man in a major film and heralded the rapid decline of his movie career. His first marriage back in 1958 had survived for just 24 days. His second was only months old when he died from a heart attack while golfing with his wife. He was just shy of his 50th birthday. One cannot help but wonder how different his life (and Liz Taylor’s for that matter) might have been had he remained in the Mark Antony role back in 1963. 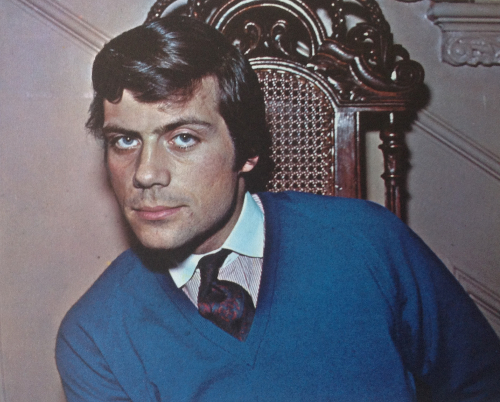 Oliver Reed was an outrageous individual, especially when drunk, which was often. He was also prone to exposing himself to anyone and everyone whenever the mood took him. As he liked to crassly put it, he was proud of his, ‘snake of desire, my wand of lust; my mighty mallet’. At the press conference for Triple Echo (1972), the discussion turned to Burt Reynolds’s recent naked pose in Cosmopolitan magazine. Oliver had already stated that he would ‘love the thought of a lot of girls masturbating over a nude picture of me’, but had indeed declined a similar opportunity to bare all just recently because, he quipped, his organ was too big to fit on the page. When an elderly female journalist in the group dared him to ‘prove it’, he immediately dropped his pants and let the end of his penis poke out. ‘Is that it?’ said the woman. ‘Why have you stopped?’ ‘Madam’, he replied. ‘If I’d pulled it out in its entirety, I’d have knocked your hat off’.

And in his final role in Gladiator

Once, while he was staying at a posh hotel in Madrid, Oliver decided to play a practical joke on his fellow guests. He secretly removed all the goldfish from the ornamental pond in the lounge room during the early hours of the morning and housed them in his bath. Then, he painstakingly cut out little goldfish shapes from some carrots and dropped them in the pond just before dawn. As the guests began to partake of their breakfast he suddenly dived into the pond and, to their horror, began devouring all the helpless live ‘goldfish’ in it. Rascality with some wit and imagination, the world needs more of it.

Baskett as Uncle Remus in Disney’s

Song of the South

The African-American actor who played Uncle Remus in the delightful Disney fantasy Song of the South (1946) was a man named James Baskett (1904-1948). In the forties it was his voice radio listeners heard playing Gabby Gibson on the immensely popular Amos ‘n’ Andy Show. He also made several B-movies, but it was his response to a Disney advertisement asking for ‘voice actors’ to play a butterfly in a forthcoming feature that led to his most memorable performance. Baskett’s magnificent voice so impressed Walt Disney himself that the screenplay for Song of the South was altered to make room for him to play a storyteller named Uncle Remus. He would relate to children the story of Brer Rabbit, Brer Fox and Brer Bear for the animated portion of the movie, and he would also sing a song called ‘Zip-A-Dee-Doo-Dah’.

Receiving his Honorary Oscar from Ingrid

Not only would his charming song win the Best Song Oscar, but James Baskett would be awarded an Honorary Oscar, presented by Ingrid Bergman, for his outstanding performance in the picture. All in all, it should have been the highpoint in his life. Instead, he was pilloried by the black community in America for his ‘Uncle Tom-Aunt Jemima caricature complete with all the fawning, standard equipment thereof.’ Furthermore, the movie itself was subjected to the worst picketing of any film since Birth of a Nation back in 1915. Such was the backlash from the African-American population that the self-appointed guardians of political correctness have virtually ensured that it will probably never contaminate our screens again, not in theatres or television. As for Mr. Baskett – well, he passed away from a heart problem not long after the brouhaha had subsided. I own a copy of this terrific Disney production and watch it from time to time. My grand-children have watched it too. They are part-Aboriginal, by the way, and it has not contaminated them in any way, for they see it for what it is – a fantasy, a fairy tale recited by a charming man.

Ward Bond as Seth Adams in

Ward Bond, John Wayne and director John Ford were lifelong drinking buddies who made several movies together, mainly westerns. Bond and ‘the Duke’ played football together at USC before appearing in their first film under Ford in 1929. The picture titled Salute brought Bond to the notice of the critics while Wayne’s performance passed virtually un-noticed. Within a decade, however, Wayne had hit it big in 1939’s Stagecoach and Bond had settled into the role of a much in demand character actor. And a very accomplished one he was.

His strident support for the House on Un-American Activities Committee (HUAC), combined with his open hostility to anyone even suspected of having leftist leanings made him quite unpopular during the McCarthy witch-hunts of the early fifties. TV fans a few years down the track, however, loved his Wagon Train series that ran from 1957-61. His workload on the series, his heavy drinking, smoking and excessive eating, would prove a fatal combination on 5 November 1960. His friend Harry Carey Jr. said later that Bond ‘popped amphetamines as if they were candy’ in his endeavours to keep his weight down. A massive heart attack took him at noon on that day. It was the same day that singer Johnny Horton was killed by a drunken truck driver, and a legend sprung up that Horton died en route to see Bond about taking a role in Wagon Train, but there is no truth in it. Not a word. Horton was traveling to Shreveport, Louisiana. Bond died in Dallas. Anyway, Ward was the star of the show only, not a producer, so he had no say in its casting. John Wayne delivered the eulogy at Bond’s funeral. In his will Bond had written instructions to deposit his ashes in the Catalina Channel. ‘I loved lobster all my life’, he wrote, ‘and I wanted to return the favour’. On November 23 a previously taped episode of Wagon Train was aired. It starred Bond of course, but it also featured Wayne in a guest star role as General Sherman and John Ford directed. The three friends were together one last time.