Before moving on to 1953 it is worth taking the time to deal with the name Robert Slatzer. Several biographies about Marilyn Monroe speak of him not only seducing her in 1952, but of marrying her as well. They even give a date, (October 3), for their wedding day down in old Mexico, but it is all hogwash. In fact, none of her circle had ever heard of the man until 1974 when he released his book titled The Life and Curious Death of Marilyn Monroe, claiming that they two were close friends until the day she died. His ‘facts’ are easily disproven. On the wedding date he mentioned Marilyn was at a party for Photoplay and was purchasing clothing at JAX department store in Beverly Hills the next morning. The receipt for $313.13 still exists. So much for Mr. Slatzer.

A year earlier, however, she met a young up and coming politician at the home of her agent Charles K Feldman. John F Kennedy was a playboy bachelor at the time and a pal of Feldman’s. It was the beginning of an eleven-year affair, one that is still being denied by reputable historians who steadfastly stand by the official story that MM and JFK barely knew one another. A cache of letters from him to her, now in the hands of Marilyn’s heirs, provides proof of a very lengthy relationship. Since then, of course, numerous books have emerged attesting to Kennedy’s multitude of affairs, in particular the one with Marilyn. Even Secret Service agents have gotten into the act, publishing memoirs regarding nocturnal rendezvous at the White House and other places between the President and the world’s #1 glamor queen.

Making River of No Return with Bob Mitchum

Marilyn and Robert Mitchum traveled to Bamff, Canada in 1953 to make Otto Preminger’s River of No Return. Bob was known as a ‘bad boy’ and womanizer, and it is generally believed that the co-stars had an affair that lasted into 1954. I am not so sure. Try as I might I could not find a single piece of corroborating evidence to prove an affair ever took place, although it is common knowledge that Mitchum did the ‘big brother’ thing, standing up to the dictatorial Preminger when he bullied Marilyn on a daily basis. Her boyfriend at that time, Joe DiMaggio, was also concerned about Mitchum racing her off, so he visited the set to keep an eye on her. She greatly admired Mitchum and there are snapshots of them dating, so it is a possibility that an affair ensued, but only that – a possibility. DiMaggio met Marilyn on a double-date in Los Angeles in 1952. He was 37, she 25, and they were instantly smitten. Joe was at the end of his illustrious baseball career with the New York Yankees, Marilyn was on the verge of becoming an international movie star. They spent that first night together and on 14 January 1954 eloped to San Francisco. MM thought she had found the father figure she had always wanted, Joe was obsessed with having a wife who was the envy of most red-blooded men on the planet. But he hated her being a movie star and he was exceedingly jealous. He insisted he approve all her future films. She was never to appear semi-dressed. And she was not to outshine him. On the occasions that her fame interfered with any of the ground rules he would sulk. For days. She later told Elia Kazan that he often slapped her and had beaten her up several times. DiMaggio demanded to know who she had spoken to each day, and she had to account for her whereabouts at all times. She started drinking heavily and taking sedatives. And she became involved with her voice coach Hal Schaefer. DiMaggio found out, beat her up again, and by October the marriage was over.

Marilyn announcing her divorce from Joe

Divorce, however, did not bring about the cessation of sexual activity between the two. Marilyn still slept with Joe whenever either felt the urge, but she also had other relationships. Schaefer was still servicing her, but so was Marlon Brando. Then along came playwright Arthur Miller and another marriage, yet all the time she carried a torch for DiMaggio. Despite the beatings and the jealousy, he was the only man she ever trusted. He started anger therapy; he loaned her money, and he never ceased trying to get her back. Even Marilyn thought they could have a future together without remarriage. Just a few days before her death she told a friend, ‘If it weren’t for Joe, I’d probably have killed myself years ago.’ 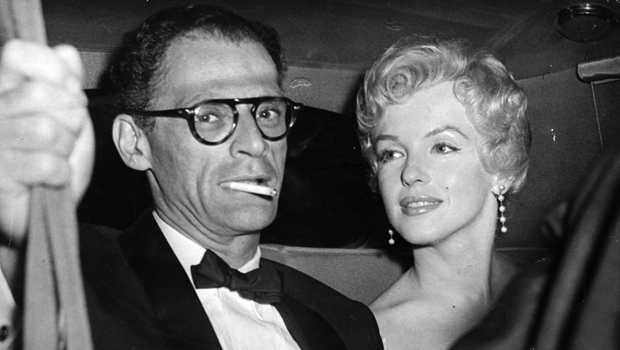 Her marriage to Miller lasted five years, from 1956 to 1961. He had won a Pulitzer Prize for writing Death of a Salesman in 1949, and two years later had met Marilyn. It was another five years before they tied the knot, and Miller’s letters to his new bride are clear evidence that for much of their union he was very much in love with her. When he was found guilty of Contempt of Congress for refusing to name names to the HUAC of members of his literary group suspected of Communist sympathies, it was Marilyn who traveled to Washington, spoke in his favor, and was partially responsible for Congress overturning his conviction. In his autobiography he would describe their marriage as, ‘the best of times, the worst of times’. Ultimately, he left her for a German-born photographer named Inge Morath. They had met on the set of Marilyn’s last completed film, The Misfits and married a month after his divorce went through. Miller and his wife Inge Morath

While the Miller-Monroe marriage was going down the tubes Marilyn was seeing other men, among them Frank Sinatra. They first met back in 1954 when Frank was still married to Ava Gardner, not that this stopped him from playing around. It was always assumed by those who knew them that most of the genuine affection came from Marilyn, not from Frank, but a writer revealed recently that Frank actually proposed to Marilyn shortly before her death, and that she had turned him down because she had reconnected with DiMaggio and was contemplating marrying him again. Sinatra’s bodyguard Jilly Rizzo confirmed the proposal: ‘Yeah, Frank wanted to marry the broad’, he recalled. ‘He asked her and she said ‘no’.’

She starred in Some Like it Hot in 1959 with Jack Lemmon and Tony Curtis and hooked up with the latter for the second (possibly third) time in her life. Her marriage to Miller was teetering, so she and Tony apparently renewed their acquaintance of nearly a decade before. In 1960, still married, she embarked upon a tempestuous (but brief) affair with the equally married French actor Yves Montand, a man who looked remarkably like her second husband DiMaggio. He was wed to Simone Signoret and had no intention of getting serious with Marilyn. Nevertheless, she chased after him for a while before the penny finally dropped and she went back home. Then, in 1961, her affair with JFK heated up. When he tired of her he handed her over to his little brother. I have written about Marilyn and the Kennedys elsewhere in my site, so I will not revisit those affairs. There have been stories that Marilyn was sleeping with mob boss Sam Giancana during her final days, but there does not appear to be a shred of truth to these stories. It is possible, however, that she may have been raped in her room at the Cal-Neva Casino by him after she passed out on booze and pills. Acquaintances of Giancana have stated that he bragged about ‘bagging’ her a few days prior to her death. On August 5, 1962 she was found dead at her Brentwood home. She was just 36. I discuss the ‘accidental death’, ‘suicide’ and ‘murder’ theories in another article here, so I will not go into her death in detail again here. Marilyn had a multitude of lovers in her life. Some were men she truly cared about, but many were individuals she traded favors with for career opportunities, or those whose kindness to her warranted a ‘reward’ in her eyes. I have touched on some of the well-known ones, the ones that several reliable sources have convinced me of their connection to MM. I have skipped over names such as James Dean, Eddy Fisher, Robert Wagner, Yul Brynner, Milton Greene and Jose Bolanos, all of whom have been cited by some as having been intimate with her, because the evidence does not appear to exist to verify this. There exists a great many faked photographs of her with just about everyone of note, including all of the above.

No doubt there are many genuine names lost to history by now. One man who was intimate with her was the president’s bisexual pimp Peter Lawford. He was also present at her home on the day she died. When questioned about her death by his wife years later, a drunken Lawford blurted out, ‘Marilyn had her last big enema!’ When we consider that her autopsy revealed Nembutal and chloral hydrate quantities equivalent to the contents of around 40 pills in her bloodstream, yet no pill casings were found in her stomach; this explanation would account for the anomaly. As coroner Thomas Noguchi reluctantly admitted in an interview decades later when challenged over his ‘death by suicide’ verdict: ‘I may have made a mistake.’ As for an ‘accidental death’ verdict, few seriously believe that a stone cold sober Marilyn (there was no booze in her stomach at all) would accidentally take forty tablets instead of the two she had been taking daily for over a decade? As I said, I covered her final day elsewhere in this site for those interested. If you happen to be one of that ever-growing multitude who remain convinced that anyone questioning any aspect of an ‘official explanation’ is a ‘conspiracy freak’, then you need not waste your time. You will not be impressed or swayed.

Joe DiMaggio arranged Marilyn’s funeral. The Kennedys were barred from it, but he need not have bothered. As if either one had any intention of attending! Marilyn who? Sinatra and his clan were also barred. DiMaggio employed goons to keep them out. As far as Joe was concerned the Kennedys were responsible for his ex-wife’s demise and, if not for Frank and Lawford, they might never have even met her. He publicly refused to shake Bobby Kennedy’s hand at Yankee Stadium a couple of years later and shed no tears at the death of either brother. ‘They got what they deserved’ he said. Joe claimed to have read Marilyn’s red diary after her death, convinced it was the main reason for her being eliminated. The book (if it existed) has never resurfaced. DiMaggio passed away from cancer at 84 in 1999. For twenty years after her death he had roses delivered twice weekly to her crypt. His final words: ‘I’ll finally get to see Marilyn.’