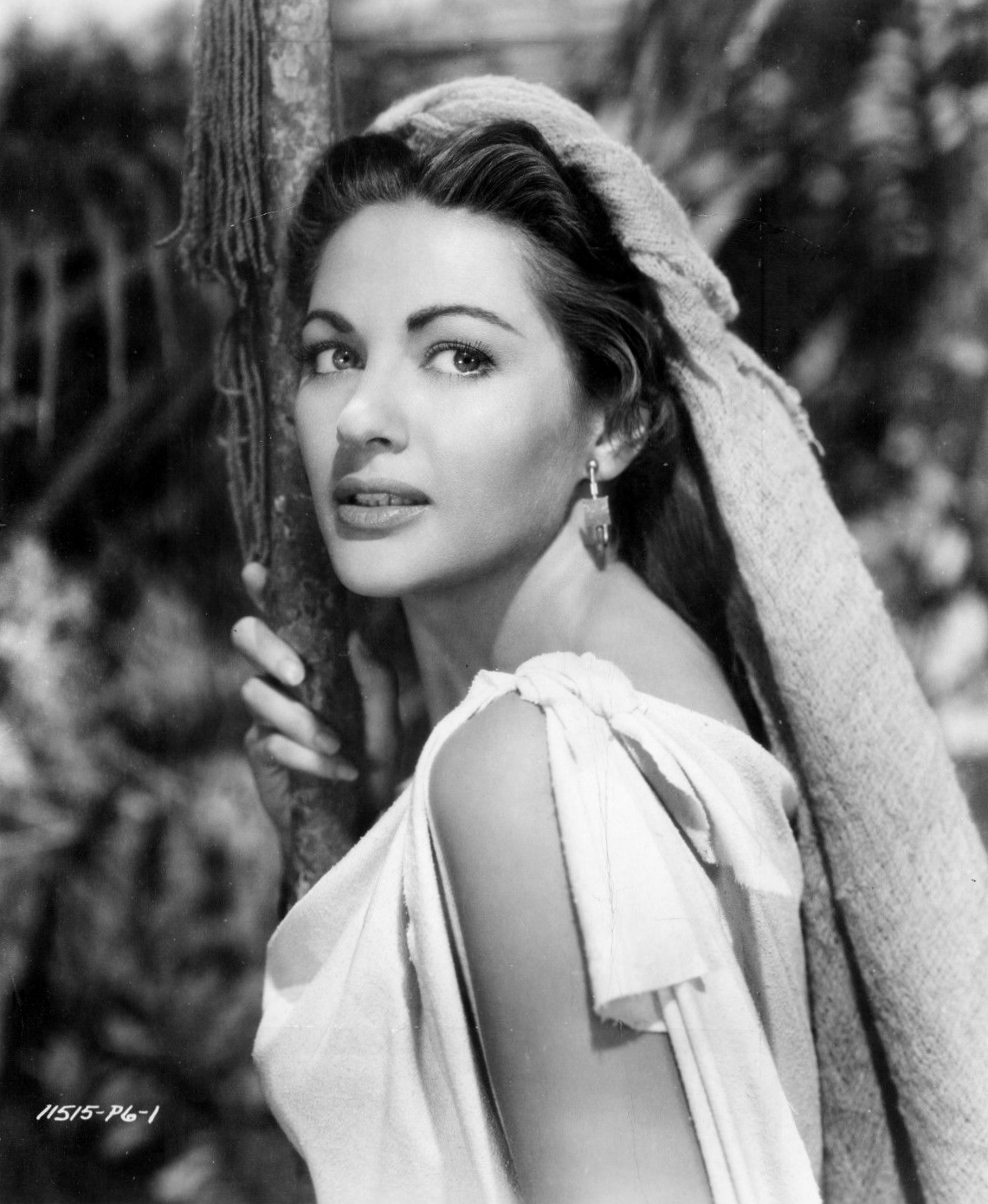 The ravishing (and ravenous) Yvonne de Carlo was at the height of her beauty when Robert Wagner spotted her in her car alongside his at a drive-in restaurant called ‘Jack’s at the Beach’. She nodded for him to come on over, which he duly did, and she invited him back to her place – for sex. After three torrid love-making days at her home he returned to find his car still parked where he had left it. A week later he ran into Tony Curtis who described in detail how he, too, had met Miss de Carlo at the same place that very week and had accepted her invitation to accompany her home for similar fun and games. ‘Everyone in town has had Yvonne de Carlo’, he most ungallantly wrote in his memoirs. But it was true. She liked men. Yvonne, of course, would later become immensely popular to TV fans as Lily Munster.

The future Lily Munster was born in Vancouver in 1922 as Margaret Middleton. Her friends both before and after fame called her Peggy. Fans of The Munsters who are unaware of Yvonne’s early movie career would probably be quite surprised to learn that she was considered to be one of the all-time great Hollywood beauties. Producer Walter Wanger described her as ‘the most beautiful girl in the world’. A slight exaggeration, perhaps, considering she only finished fifth in the Miss California quest during the war, but she certainly turned heads and raised temperatures among the menfolk of her day. Her mother was a waitress who envisioned fame and fortune for her daughter as a dancer, so she got her employment performing at the Palomar Night Club in Vancouver in 1937. However, when mum learned that 15 year-old Peggy had been pressured into exposing her breasts as part of her act, she pulled her out of there and headed for California. Unfortunately, their first crack at the silver screen was a resounding flop, so they returned to Canada. Three years later, however, Peggy had developed into a stunning 18 year-old, so mother and daughter took a second shot at Hollywood.

Yvonne starting out in Hollywood

Just before America’s entry into World War II, Peggy landed a few uncredited bits in twenty or so B-grade features, eventually being signed by Paramount Pictures in 1942. The studio soon dropped her and she was picked up by Universal instead. More bit parts followed for the next three years until she finally scored the title role in a Universal feature called Salome Where She Danced. It was not much of a movie, but it finally kick-started her career. She was now Yvonne de Carlo and at the height of her considerable beauty.

Already Yvonne was acquiring a reputation for being ‘easy’. She was also more than willing to make headlines (any publicity was good publicity, she felt) that kept her name before the cinema-going public. Affairs with bandleader Artie Shaw (in 1942) and Howard Hughes (from 1943 to 1946) were common knowledge. In her 1974 autobiography she described Hughes as ‘an expert lover’, although she was quite put off by the man’s toenails, which she said curled almost all the way around his toes! ‘Howard taught me how to land a plane and how to take off. But he never taught me anything about flying in between’, she said. ‘He thought that I had learned the difficult parts, and that was enough.’ Mr. Hughes was an odd fish to say the least. Yvonne’s other lengthy relationships during the war included those with singer/actor Rudy Vallee, and actors Carlos Thompson and Sterling Hayden. Robert Stack and Yvonne were an item for some months in 1946. A year after that she was briefly engaged to Howard Duff. In her memoirs Yvonne happily names the many famous men who visited her bed. Quite a few were serious relationships that she hoped might evolve into true love, even marriage, but there were an awful lot of ‘one night stands’ too. Somewhere along the way she found time for several seemingly serious involvements. James Stewart, Ray Milland, Scott Brady and Prince Aly Khan all intimated they were in love with her, but none of them went the distance. In 1949 she broke up with Jock Mahoney (Sally Field’s step-dad) after suffering a miscarriage. The break-up was not amicable, Yvonne telling reporters that Jock’s only claim to fame was being seen with her. Her next serious entanglements were with Steve Cochran (1950), Rock Hudson and bullfighter Mario Cabre (both in 1952), and Robert Taylor in 1953. Among her many sexual encounters were the following: The Shah of Persia, Rod Cameron, Walter Matthau, Errol Flynn, Red Skelton, Anthony Quinn, Billy Wilder and Burt Lancaster. According to her autobiography, she and Burt made love ‘on a mink coat in her back yard.’ Like many, many of her encounters it was a ‘one-off’ thing. 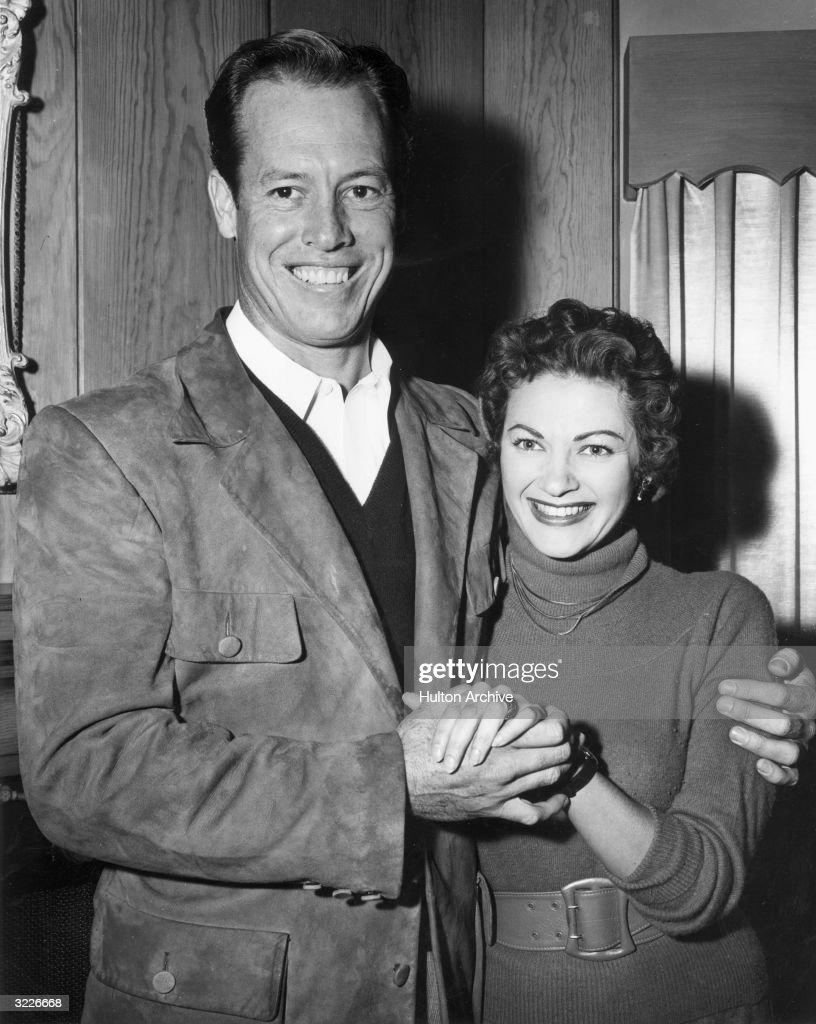 In 1954 she married stuntman Bob Morgan, her only husband. Morgan was an alcoholic who was seriously injured during the making of How the West was Won in 1962. He was crushed between some logs on a railway flat-car when a chain snapped and very nearly lost his life. Yvonne nursed him through his five years of recuperation and rehabilitation, and it sent her flat broke. There was clear evidence, Morgan felt, of negligence on the part of the studio (MGM), so he sued the company for $1.4 million. According to Yvonne, studio employees were threatened with losing their jobs unless they supported the company’s stance that all precautions had been taken on the set, and that the accident was the fault of no-one. With no witnesses to back him Bob Morgan’s suit was unsuccessful. He and Yvonne parted company in 1968. 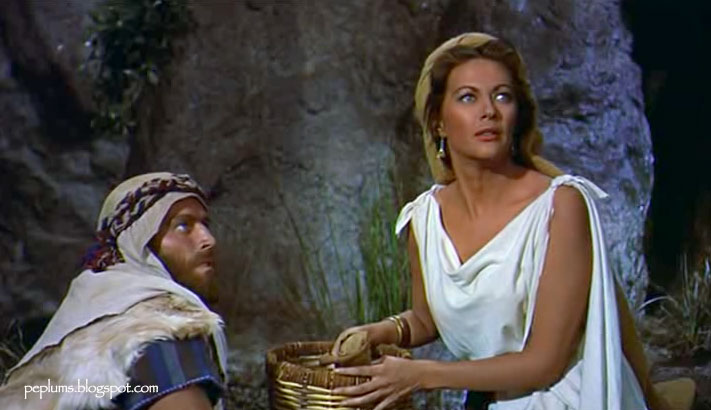 In a scene with Charlton Heston in The Ten Commandments

When the role of Lily Munster was offered to her she was compelled to take it for financial reasons, even though it was against her better judgment. Oddly enough, it would define her as an actress. Back in 1956 Cecil B DeMille had given her the chance to perform in an A-grade blockbuster, his epic The Ten Commandments. She was allocated the role of Sephora, Moses’s wife, and she played it well. Today, the name Yvonne de Carlo is really associated with two productions only – The Ten Commandments and the TV series The Munsters. Strange as it might seem, the former has dated significantly, yet the series still retains its charm. Yvonne spent her final years as a resident of the Motion Picture and Television Country House and Hospital in Woodland Hills. She died from heart failure in 2007 at the age of 85.