Canadian-born Florence Lawrence became the first movie star to be identified by name. Before that she was simply ‘The Biograph Girl’, and that suited her just fine, as it did all the other featured players in other companies. Nobody wanted to be named because it might jeopardize their stage careers if Broadway, for instance, found out they were (horror of horrors) movie players. But then along came Carl Laemmle. In 1909 he created the Independent Motion Pictures Company (IMP) and publicly refused to join the Motion Picture Trust, Thomas Edison’s all-powerful controlling body. To demonstrate his independence and his anger at Edison’s thugs attacking his film crews and wrecking his equipment, Carl began negotiating with Florence about her signing with IMP. Biograph found out about it, fired her on the spot; then announced to the world that she had died! Laemmle countered in 1910 with his now famous headline ‘WE NAIL A LIE’.

When she made her first public appearance under her own name, (in St Louis in 1910), she became instantly famous. Furthermore, her pictures suddenly made a fortune simply because she was in them, so other studios started naming their stars as well. The star system had arrived. She was soon overshadowed by prettier stars and her career declined rapidly until, in 1938, Florence took her own life. After years of unhappiness and poor health she decided one day to end it all by swallowing ant paste, suffering a truly horrendous death. Discovered dying in agony in her apartment on December 27, she passed away the following day in hospital. 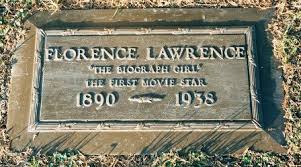 Lionel Atwill was a character actor, best remembered today for his portrayal of Olivia De Havilland’s dastardly uncle, Colonel Bishop, in Errol Flynn’s debut film Captain Blood (1935). In his private life he was something of an ‘institution’ in the Hollywood of the thirties, notorious for the weekly orgies conducted at his sumptuous home. Each Friday evening participants were required to bring along a doctor’s bill proving they were sexually ‘clean’, before they could sit down to a formal dinner, followed by a move to the living room where everyone would strip naked – except for ladies’ jewellery – and the fun would begin. Atwill himself would decide who would sleep with whom over the weekend-long party, and he gave himself the onerous task of servicing whichever women he fancied over the two days. Regulars to these events included Clark Gable, Barbara Stanwyck, Marlene Dietrich and Joan Crawford. Partners could be of either sex according to preference. 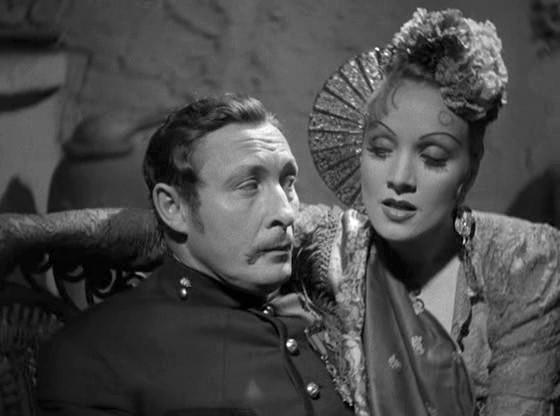 Atwill and Dietrich in The Devil is a Woman As Olivia deHavilland’s father in

This happy arrangement came to a screeching halt on Xmas Eve 1940 when Lionel (or someone) made the mistake of inviting several under-aged girls to the shenanigans. A 16 year-old became pregnant and told her parents what had transpired. A number of big names; actors, directors and executives, were at the party, so the ‘fixers’ had to move fast. The girl was paid off and sent back home to Minnesota, but somebody had to be charged, so Atwill found himself on trial. He was judged to be innocent of raping a minor, but guilty of committing perjury, having ‘lied like a gentleman’ to protect the identities of his famous guests. He was given a five-year suspended sentence in 1943. The ‘fat cats’ whose names his silence kept clean were probably grateful – but only in private. Pneumonia claimed him in 1946 at the age of 61. LB Mayer’s private secretary for over 30 years was a tough lady named Ida Koverman, known to everyone as ‘Kay’. She wielded enormous power and influence over him, deciding who was worthy of seeing the great man, which issues he needed to know about, and which ones could be better handled by Howard Strickling and Eddie Mannix. It was Ida who talked him into signing Clark Gable, Nelson Eddy, Mario Lanza and Robert Taylor. She even picked out Taylor’s name for him, his born name of Spangler Arlington Brugh being totally unacceptable. MGM’s ‘Little Red Schoolhouse’ (it was actually white) for its juvenile stars (Mickey Rooney, Judy Garland, Jackie Cooper, Liz Taylor, Jane Powell and Donna Reed, to name but a few) was her idea as well, one that LB embraced heartily.

Ida was only ever paid $250 a week, never once asking for a raise during her 30 year tenure at MGM. Even when Howard Hughes offered her $1,000 a week to transfer her allegiance to RKO, she politely declined, and did not even mention the offer to Mayer. She was held in such high esteem by her boss that, outside of his family, only she and Howard Strickling were left money in his will. 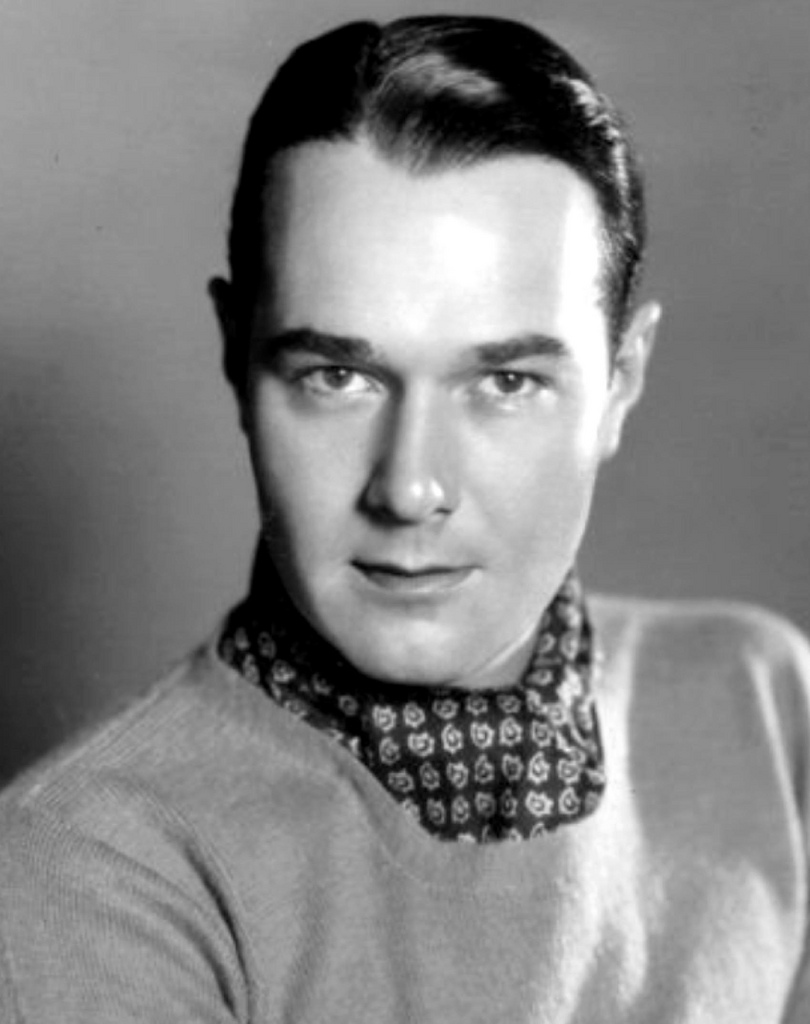 A huge MGM star during the silent era and the early days of sound, William Haines, was openly gay and known in homosexual circles as ‘Lavender Lips’ because of his prowess in fellatio. LB Mayer could not abide homosexuals, and would have terminated his contract on the spot when he found out, but could not bring himself to do so. Not out of any sentimentality, of course, but because Billy Haines made an awful lot of money for the studio. And business was business, after all. Audiences knew none of this of course. Louis B. Mayer was indeed a homophobic. The only gay actors he kept at MGM were those whose movies turned a big profit, and by the end of the silent era Billy was being regularly named as the #1 box-office draw in the movies. While gays remained successful their jobs were relatively secure, but the moment their careers began to wane they were given their marching orders. When that day arrived it did not overly worry Haines, because he had decided to retire anyway. He intended to start an interior decorating business with his partner Jimmy Shields, and they duly did just that. So successful did they become that Jack Warner hired them to refurbish his mansion, Bloomingdales also hired them, and it was their expertise that was responsible for the refurbishing of the American Ambassador’s residence in London! And the two men remained in love for 50 years until Billy’s death from lung cancer in 1973. Three months later a broken-hearted Jimmy took his own life with sleeping pills. Good friend Joan Crawford described them (most accurately in fact) as ‘the happiest married couple in Hollywood.’

THE ARRIVAL OF THE TALKIES

Once the talkies arrived in 1927 things changed. Actors now had to have voices. And most of them did not possess one. In 1925, despite Jack Warner being dead against it, his brothers purchased a sound system called Vitaphone. With it they produced a few sound shorts at their Vitagraph Studios in New York. Two years later they made the first ever movie containing audible dialogue, not just sound effects. Al Jolson ad-libbed: ‘Wait a minute, wait a minute, you ain’t heard nothin’ yet. Wait a minute I tell ya, you ain’t heard nothing.’ It saved the studio and revolutionized the movie industry. For one of the studio founders, Sam Warner, the picture and the impact it had arrived one day late. He died the night before. The Jazz Singer – the birth of sound

Even though MGM ‘Wonder Boy’, Irving Thalberg, described sound as a ‘fad’, it soon became apparent that audiences could not get enough of it. Silent movies became obsolete overnight, and theatre owners had to adjust. That meant forking out about $15,000 per establishment for the equipment to handle ‘talkies’. At the time there were 20,000 movie theatres in America, so the added cost was enormous. Studios, too, had to spend a fortune adapting or fall by the wayside.

Careers evaporated overnight. New York stage actors suddenly found themselves in demand as voice coaches for the Hollywood movie actors whose words betrayed their lower class origins. Stage actors considered themselves superior to movie actors, but the money offered for coaching proved irresistible to many who packed up and moved out west to California. Untrained players such as Joan Crawford went into panic mode. She spoke like the former prostitute she had been, so she immediately hired Laura Hope Crews at $1,000 a week to ‘refine’ her voice. William Powell, whose voice was quite OK, had never before heard himself recorded. The first time he did so, he ran from the room. Clara Bow, the ‘Brooklyn Bonfire’, had a strong accent that did not suit her sexpot image. Marion Davies stuttered although, oddly enough, never when she repeated memorized lines, so she survived. Vilma Banky’s heavy Hungarian accent made her pretty much unintelligible so her career sank like a stone and she returned to Europe. All three Talmadge sisters had heavy Brooklyn accents that ended their careers too. Lesbian actress Alla Nazimova accepted her fate philosophically. She knew her severe Russian accent would not measure up.