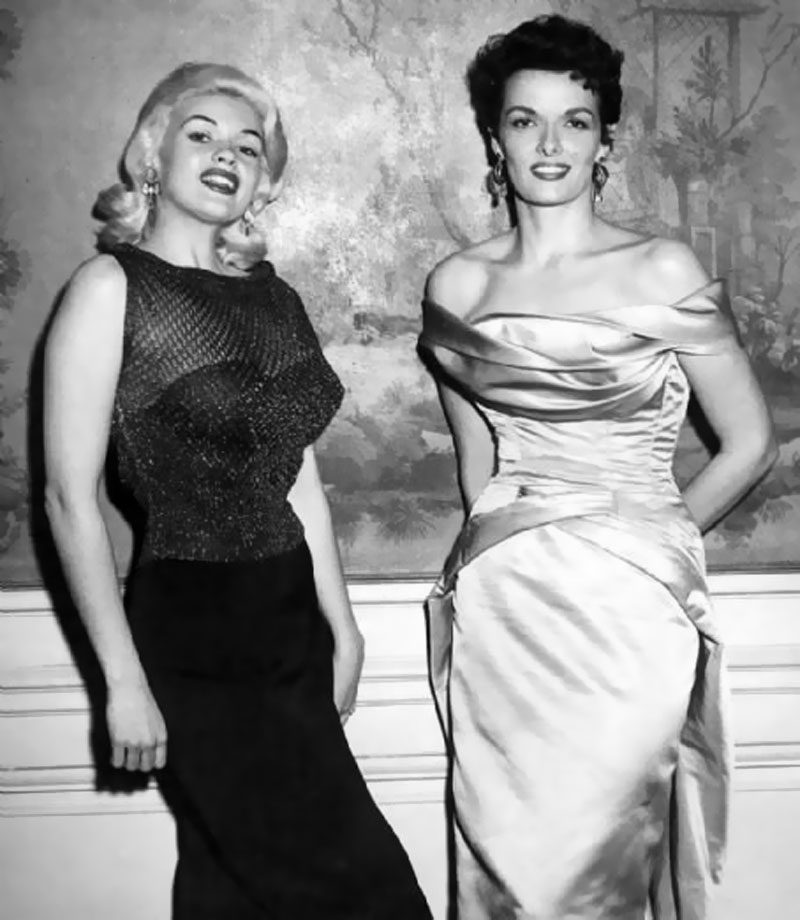 Jayne & Jane at the Underwater premiere 1955

In 1955, in Florida, the premiere for a very ordinary movie called Underwater was actually held underwater. Critics and other guests were encouraged to don aqua-lungs and bathing costumes to watch this Jane Russell vehicle at the bottom of a pool! It was a novel idea that did not really work, but it afforded an opportunity to an unknown young woman named Jayne Mansfield to get herself noticed. It has been said that, despite her unimpressive high school record, Jayne was the possessor of an IQ of 163. Well, maybe. One thing is certain, however. Somebody, maybe Jayne herself, came up with the idea that she should ‘accidentally on purpose’ fall into the pool at the premiere; then have her bikini top suffer a ‘garment malfunction’. In layman’s terms Jayne’s trademark bosoms fell out just in time for a lot of highly influential Hollywood fat-cats to get an eyeful, and for a host of photographers to take snapshots. Later, Jane Russell generously posed with the unknown party-crasher, and Warners signed Miss Mansfield to a contract. Her acting career was off and running. Brazilian billionaire Jorge Guinle arrived in Los Angeles on the very day of Marilyn Monroe’s death, armed with a gift for her, a beautiful topaz necklace, and all set to renew their on-again, off-again relationship. They had first met back in 1947 when Marilyn was just 20. Upon hearing of her sudden demise he reacted in his customary manner. He thumbed through his address book in search of a replacement bedmate and settled on Jayne Mansfield. ‘I wasn’t able to give the jewels to Marilyn’, he reflected later, ‘so I gave them to Jayne. She was delighted. We spent the next two years together’. What a lovely, sentimental guy. Clearly, Marilyn’s death hit him hard. According to Guinle his voluptuous replacement was quite a girl. ‘Jayne Mansfield was a complete nymphomaniac’, he said. ‘All she thought about was sex…she liked to do it anywhere’. He recounted evenings at restaurants when she would suddenly whisper to him, ‘I feel sexy. Let’s go home and make love’. ‘And we’d leave there and then, without even eating’. On one of her visits to Rio she could not wait until the limmo reached their hotel. ‘We had sex, right there, in the back seat of the car’, he recalled.

Guinle was something of a legend when it came to Tinsel Town playboys; possibly the most successful ever, as far as chasing down and seducing Hollywood’s most alluring actresses goes. This diminutive, charming man bedded the world’s great beauties, seemingly with little effort. Of course, his almost unlimited funds helped pave the way. According to the newspapers of the day it was Guinle that lured lovely Janet Leigh away from her wayward husband Tony Curtis. He gleefully recounted his dalliances to anyone prepared to listen and he was never short of an audience. For instance, he told of first seducing Rita Hayworth aboard a moored boat. ‘It was fantastic. She was great in bed’, he said. He described Anita Ekberg as, ‘very unsophisticated but so beautiful – when I saw her for the first time, I almost flipped’. Hedy Lamarr he said was, ‘along with Ava Gardner, the most beautiful woman Hollywood has ever seen’. Other conquests included Susan Hayward, Carole Landis, Veronica Lake, Lana Turner and Linda Christian. He passed away in 2004 at the age of 88 – in all probability from exhaustion – having gone through the entire family fortune. If Mr. Guinle did not die with a smile on his face he was a very hard man to please.

When Jayne wed strong man Mickey Hargitay in 1956 she purchased the former home of singer Rudy Vallee for $75,000, a 40-room mansion at 10100 Sunset Boulevard, Beverly Hills. The newlyweds quickly dubbed it ‘The Pink Palace’ because before long everything in it and around it was painted pink. There was pink fur on the floors of the bathrooms, a pink heart-shaped canopy over the pink bed, pink fluorescent light bulbs and a pink bathtub and pool, both in the shape of a heart. They even installed a pink fountain that spurted pink champagne. Singer Engelbert Humperdinck would later purchase the building in the 1970s before selling it in 2002 for $4,000,000. Developers, exhibiting a deplorable lack of history, tore it down the same year.

In the mid-sixties, her career all but over, Jayne turned down the role of Ginger Grant in TV’s Gilligan’s Island series. She claimed she was a movie star and not a lowly television actor. In 1963 she posed buck naked for Playboy magazine, becoming the first big established star to do so. The issue sold out quickly and Hugh Hefner of Playboy found himself on obscenity charges over the explicit series of pictures. Her alleged involvement with the Church of Satan in 1966 appears now to have been little more than a publicity stunt gone horribly wrong. Tony Randall considered her a down to earth woman who clearly loved her lifestyle. She was known to pop out of her home to greet and wave to busloads of tourists as they drove by the mansion. ‘She was a hoot!’ he said. Perhaps, Jayne herself summed up her approach to life best: ‘A forty-one inch bust and a lot of perseverance will get you more than a cup of coffee – a lot more. But most girls don’t know what to do with what they’ve got’. Nobody could ever accuse Jayne of that. Robert Wagner recalled passing Jayne in her car on his way to Romanoff’s one evening. Both were attending a welcoming party for Italian actress Sophia Loren. The rear window of Jayne’s vehicle was down and she was busily applying rouge to her considerable nipples. ‘Looking good!’ said Bob.

Mariska Hargitay, the fourth of Jayne’s five children, plays Olivia Benson in the hit TV series Law & Order: Special Victims Unit, and has done so for the past seven seasons. She was three years old at the time of her mother’s death in a car accident. Mariska and two of her brothers were asleep on the back seat of the vehicle when it collided with a tractor-trailer. The impact killed Jayne and her boyfriend Sam Brody. Mariska has no recollection of the accident, but bears a legacy from that night, a zig -zag scar on the side of her head. Although a minor actor named Nelson Sardelli claimed to be the girl’s natural father, Mansfield’s former husband Mickey Hargitay never questioned her paternity and raised Mariska as his own, even though her dark features seemed to suggest that Sardelli had sired her. Even though Hargitay and Jayne had been divorced for over three years at the time of her death, a weeping Mickey threw himself on her coffin at the funeral. Jayne Mansfield was not much of an actress, she couldn’t sing or dance, and she was not overly pretty either. She made the most of the attributes nature bestowed upon her and played the voluptuous sex kitten for all she was worth, both on the screen and off it.