The chronic problem with casting Shakespeare’s Romeo and Juliet is finding actors who are both young and experienced enough in stage acting to carry it off. After all, in Bill the Bard’s play Juliet is just fourteen years old. MGM producer Irving Thalberg unwisely chose to tackle the problem in the 1936 version by giving his wife Norma Shearer the role. Depending on which birth date is the correct one she was thirty-three, thirty-five or thirty-six years old when she got the nod to portray the traumatised teeny-bopper. Thirty-three year-old Brian A’Herne tested as Romeo but withdrew because he thought he made Norma look too old. He should have hung in there because MGM then tested thirty-eight year-old Fredric March before settling on forty-four year-old Leslie Howard! Robert Donat and Robert Montgomery had already rejected the role. All this accomplished was to create further casting problems. With the leads now in their thirties and forties it became necessary to increase the ages of their friends as well. Forty-three year-old Basil Rathbone was then chosen to play Tybalt and the fifty-three year-old rum pot John Barrymore was signed to wheeze his way through the role of Mercutio. This was Thalberg’s final film for MGM. The Los Angeles premiere took place on November 14, 1936. Irving would not be in attendance and for the very best of reasons. He had died that very morning. In the months leading up to the shooting of the picture he had tried his damndest to have Barrymore replaced by William Powell, but to his great credit the affable Powell had steadfastly refused to accept the role. A man of principle, he felt he owed his career to an opportunity afforded him in his younger days by Barrymore. Consequently, he point blank would not betray his benefactor. Thalberg was stuck with ‘the Great Profile’ whether he liked it or not. At least the man’s name was still a drawcard of sorts. The public (as always) were kept in the dark about his chronic alcoholism.

Cast and crew members vow that he was actually quite drunk during a couple of scenes that made it into the final print, including the Queen Mab speech. Evidently, he did it superbly anyway. The man possessed a talent for acting that was indeed unique. In fact, the whole company was somewhat in awe of him and applauded his rendition of the speech on its completion. ‘Fuck the applause’, he said. ‘Who’s got a drink?’

The 1954 effort is probably the least remembered screen version of the Bard’s love story. It featured Lawrence Harvey in the role of Romeo and a young unknown, Susan Shentall, as Juliet. Susan was an eighteen year-old student when director Renato Castellani discovered her in a London pub of all places. Almost unbelievably, he cast her as Juliet because ‘she had pale sweet skin and honey-blonde hair’. Not surprisingly, this was her one and only appearance on screen. In 1996 she died from bronchopneumonia at the age of 62. One can imagine how difficult it must have been for the inexperienced Miss Shentall playing one of the leads in a production that boasted not only Harvey in its cast, but Dame Flora Robson, Sir John Gielgud, Mervyn Johns, Sebastian Cabot, Bill Travers and Norman Wooland. She was scarcely helped by the pedestrian direction and the snail-pace of the doctored script. Yes, Mr. Castellani actually omitted some of Shakespeare’s words, among them the entire Queen Mab speech from Mercutio, a highlight in every other production.

Leonard Whiting only got the part as Romeo in 1968 because Paul McCartney had already rejected it! What a pity. The thought of a Beatle playing the star-struck lover is a mouth-watering prospect indeed. Seventeen year-old Olivia Hussey plays Juliet and must surely be the only native Falkland Islander to star in a major motion picture. She later married Dean Martin’s son Dean Paul. He died in a plane crash a couple of years after their divorce. She then went on to wed Japanese pop star Akira Fuse. Leonard Whiting plays Romeo. 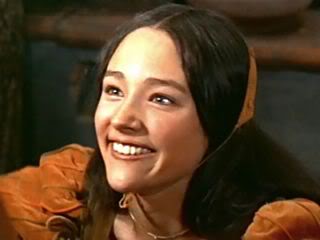 Director Franco Zeffirelli at first discarded Hussey as his Juliet because he thought she was too fat. But then the girl he had originally chosen decided to cut her hair, ruining the quality he had admired most about her. By the time Hussey came in for another reading she had lost her baby fat and had bloomed into a beautiful teenager. The part was hers. Even so, she was ordered off pasta during production as it became obvious to all that she was developing a very full, adult figure, too full for the young Juliet. For years there has existed an urban myth that Olivia Hussey was not allowed to attend the premiere because she was only fifteen years old and it contained nudity – her nudity in fact. Actually, she was 17 when the picture was released in 1968, not 15. Besides, had she been only fifteen she could still have attended with a chaperone. Zeffirelli may well have started the myth himself. It was common knowledge that Olivia was just fifteen when the picture was shot, and her youth was a good publicity talking point.

Fourteen year-old Natalie Portman almost snagged the role of Juliet in the 1996 version. Director Baz Luhrmann flew the unknown actress to his hometown Sydney, Australia, to shoot some scenes with Leonardo DiCaprio who was to play Romeo. ‘Although she’s a fantastic young actor, she’s a tiny little girl and Leonardo’s six feet tall’, explained Luhrmann when asked why he did not cast her. ‘He’s 21, but can look 18. She made him look all of 21, and it just became obscene’. A disappointed Natalie claimed she would rather have lost the role than do something that could not be perfect. ‘They said it looked like Leonardo was molesting me when we kissed’, she said.

The major problem about choosing little Natalie, of course, was the topless scene. She was so tiny it might well have resembled child pornography. Claire Danes ended up with the role and her topless scene with Leo was the first scene shot on day one. Considering the fact that Claire thought Leo was ‘immature’ in the early days of filming and told him so, shooting that particular scene on the opening day of the shoot must have been handled with considerable diplomacy by Luhrmann. Leo did not think much of Claire at that stage of proceedings either. Still, this modern-day version of the Bard’s classic is considered by many to be the best screen attempt. Personally, I did not enjoy it, but then I am not a fan of Shakespeare in any case, although I did think Shakespeare in Love was a bit of fun. I must confess that when it comes to classical anything I invariably betray my working-class origins. True to form, I am one of those souls who simply cannot listen to the William Tell Overture without thinking of the Lone Ranger! The instant it starts up I can think of nothing but the Masked Man and Tonto hurtling across the plains.

I once took my 9 year-old daughter Kristina along to a Murdoch University performance of a Shakespearian play (I forget which one). In truth I only went because another of my lovely daughters (Amber) was in the thing. On the way home I asked Kris what she thought of it. ‘It was pretty good’, she said in all seriousness, ‘but I would have liked it more if they had done it in English.’ My sentiments exactly. Sixteenth century English should be for sixteenth century Englishmen.