When Patty Duke was just twelve years old in 1958 she appeared on the TV quiz show, The $64,000 Question, in the category of ‘music’. Pitted against child pop singer Eddie Hodges (he had a hit with a song called I’m Gonna Knock on Your Door around that time), she won $32,000. Eddie had earlier won $25,000 on Name That Tune when he was teamed up with a young, unknown pilot named John Glenn. Whether or not Hodges and Glenn were ‘coached’ on that show is not known, but Patty openly states that both she and Eddie were given the answers on The $64,000 Question. Later, when she appeared before a Senate Committee investigating the quiz shows scandal, she lied to the panel before eventually breaking down and admitting she had been given answers on the show and that she had also been ‘coached’ on how she should respond to the committee’s questions. 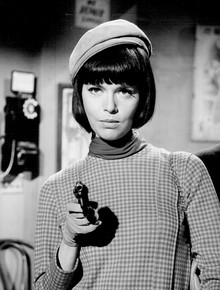 Actress Barbara Feldon (Agent 99 in Get Smart) won money on the $64,000 Question Challenge also. She told an interviewer that she spent three months memorizing a book of Shakespeare’s plays which enabled her to win. There seems no reason to doubt her. At the time she was working on Broadway in a fifties version of The Ziegfeld Follies when TV reps came looking for a pretty, leggy contestant to adorn their show. Barbara was chosen and decided to do as much as possible to perform well. Blessed with a strong memory she chose Shakespeare’s plays and did very well. The $128,000 question that eliminated her was a loaded one. She was shown three different facsimiles of ‘the Bard’s’ signature and asked to match all three with historical documents he had supposedly signed. She could not do it. ‘I think they wanted to get rid of me’, she said. Perhaps, the public had tired of Shakespearian questions, so the powers that be decided it was time for a change. 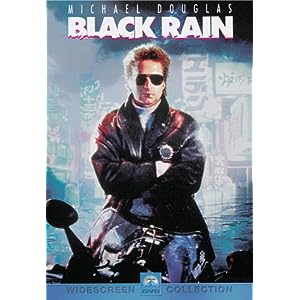 Director Ridley Scott has made some fine movies; Thelma & Louise (1991), Gladiator (2000) and American Gangster (2007), to name but three, but he lets himself down here. I don’t know what the Japanese thought of the film, but I would wager it wasn’t much. Michael Douglas’s character, an NYPD cop named Nick, disrespects, abuses, orders about, and refuses to co-operate with the local police throughout the entire picture. He tramples tradition and culture underfoot, rarely speaks civilly to anyone, and treats the Japanese detective assigned to help him as an underling. If Scott intended to turn Nick into ‘the ugly American’ of caricature he succeeded brilliantly. If the movie’s aim was to demonstrate the superior police work of the NYPD, it appeared to succeed there too, for Nick almost single-handedly solves the case and captures the bad guy while thousands of Tokyo policemen run about like headless chickens. Then, to really push the point home, Scott has the entire room full of local policemen stand up and give Nick a standing ovation! A ‘standing 8 count’ would have been more appropriate. On an even sadder note Japanese star Yusaku Matsuda, who played the ‘heavy’ named Sato, was dying from cancer throughout the shoot. He would pass away at the age of 39, just seven weeks after the film’s American premiere.

Paul Hogan was forty-seven years old when he hit it big with Crocodile Dundee in 1986. His marriage of fifteen years folded when he fell in love with his co-star, Linda Koslowski, whom he later married. Their 24 year-old marriage ended in 2014 following a two-week long separation. It was a completely amicable break said both partners. ‘One of our problems was we really had nothing in common’, said Linda. Hogan kept the rights to the Crocodile Dundee name, while his wife collected a one-off payment of $6.25 million, plus use of their Los Angeles home for 4 years or until she remarries, whichever comes first. Crocodile Dundee became the first foreign movie ever to top the US annual box-office gross list and at one time was the highest grossing movie ever outside of the USA. It took in $70 million in North American rentals, $80 million in rentals worldwide outside of the USA, and grossed overall $328 million in cinemas and rentals combined. Tens of millions of dollars in profits were shared by the film’s Australian investors. These included ‘half the Australian cricket team who were our mates’ said Hogan at the time. The picture really was a ‘one-off’ phenomenon, for everything else Paul put his hand to was nowhere near as effective.

This abominable picture has often been referred to as ‘An RKO Radioactive Picture’, on account of it being shot at Yucca Flats, Nevada, a couple of years after no fewer than eleven atomic bombs had been tested there! Immense clouds of radioactive fallout funnelled into Snow Canyon, Utah as well, where much of The Conqueror was shot. The actors and crew were exposed to the deadly stuff for thirteen weeks. Not only were they inhaling it on location, but the picture’s financial backer, billionaire Howard Hughes, paid to have sixty tons of contaminated sand transported back to Hollywood to use on the set for retakes. The result of all this insanity has since become apparent. By November 1980, no fewer than 91 of the 220 cast and crew had been diagnosed with some form or another of cancer. And that figure does not include hundreds of Navajo Indians who were used as Mongol horsemen in the movie. Among those who worked on The Conqueror and perished from cancer are the following: John Wayne, Susan Hayward, Agnes Moorehead, John Hoyt, Pedro Armendariz and the director Dick Powell.  The picture itself is considered to be one of the all-time worst movies ever made. Roy and his guitar in action

Roy Orbison, my favorite singer of all-time, made just one movie (and no wonder). It was called The Fastest Guitar Alive and was released in 1967. Set towards the end of the American Civil War it has Roy embarking on a secret mission to steal gold for the Confederacy and deliver it to a southern general. That kind of thing is nothing new, but Roy is a spy with a difference. He carries a guitar that shoots bullets! Poor Roy. Sadly, the great pop singer was a not so great actor, although it would be fair to say that even the great Tom Hanks would be hard-pressed to handle the handicap of toting around a bullet-shooting guitar! Fortunately, Roy had a stellar singing career to fall back on. In November 1988 he confided to Johnny Cash that he was experiencing chest pains and would have to do something about it before long. But he never did. On December 6 he passed away at the age of 52 and the world lost a truly unique performer.