This film, starring Meryl Streep, tells the story of a bizarre real-life tragedy that transpired near Ayers Rock (now called Uluru) in central Australia on 17 August 1980. On that day a ten weeks old baby named Azaria Chamberlain was taken from the family’s camping ground tent by a dingo and killed. The police and a jury did not believe that was what happened, and the child’s mother, a Seventh Day Adventist named Lindy Chamberlain, was convicted of murdering her infant and gaoled. Her husband Michael was also convicted as an accessory to murder. Most of Australia had an opinion on what happened, an opinion generally based on hearsay, flimsy, often conflicting evidence, and fueled by religious intolerance and media hype. Few took the time or made the effort to unravel truth from fiction or evidence from innuendo. Most Australians had only ever seen a dingo in a Zoo, so they tended to find the whole ‘dingo’ scenario hard to believe. Uluru (formerly Ayer’s Rock)
At the trial two key pieces of testimony weighed heavily against the Chamberlains. First, a prosecution ‘expert’ insisted that stains found in the interior of the family car were consistent with the blood of a baby whose throat had been cut whilst it was in the vehicle. Long after the proceedings had concluded, however, it was revealed that the ‘blood’ was in fact a solution sprayed on the interiors of cars of that model during production to help reduce engine noise! Another ‘expert’ found no sign of canine saliva on the baby’s jumpsuit discovered in the vicinity of the camp. When Lindy testified that Azaria was wearing a matinee jacket over her jumpsuit at the time of her disappearance, hence, any saliva would probably be on that garment rather than on the jump suit, she was not believed. Her testimony was refuted and ridiculed by the prosecution who argued that, since the matinee jacket was nowhere to be found, the probability was that it never existed in the first place.

The prosecution then put it to the jury that there were only two possible explanations for Azaria’s death. Either she was taken by a dingo, as her mother claimed, or she was murdered. Evidently, enough doubt was cast upon the dingo scenario to convince the jury that murder had been done. Lindy’s widely reported short-tempered demeanor in the witness box impacted on the jury, much as it did on the Australian public, her anger and frustration over the entire ordeal interpreted by many as signs of guilt. 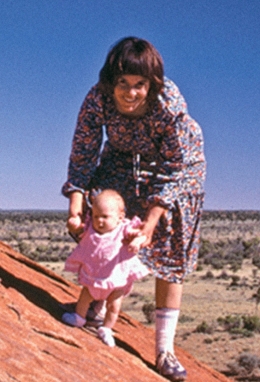 Lindy & Azaria on ‘the Rock’

just prior to Azaria being taken

Six long years after the Chamberlains had been convicted, the matinee jacket turned up in a region riddled with dingo lairs, and in 1988 the convictions were overturned. A decade after the tragedy Lindy and Michael Chamberlain were awarded $1.3 million by the Australian Government as compensation for Lindy’s wrongful imprisonment. The amount equaled about one-tenth of the family’s legal expenses.

In the late 1990s a string of dingo attacks on children (and even two adults) occurred on Fraser Island off the Queensland coast, proving that dingos were far more dangerous than most Australians had previously believed. In truth, there have been more than four hundred documented attacks on Fraser Island alone. In 1998, a 13-month old girl was dragged from a picnic blanket at the Waddy Point camping area on the island. The animal dropped its prey when the child’s father intervened. Sadly, Azaria had not been so fortunate at Ayers Rock.

Lindy’s defiant and often indignant attitude during many mindless and insensitive television interviews did not sit well with the Australian public, many of whom felt she should have publicly grieved for her lost child more than she did. But the lady was made of sterner stuff. When confronted by her accusers she stood firm and often treated accusations with the disdain or derision they deserved. The public mistook her defiance for hardheartedness and a lynch-mob mentality seemed to grip much of the nation.

Sadly, informed opinions were rare at the height of the trial, and compassion for the Chamberlains was generally confined to family, church friends, and to those Australians who recognized a media railroading exercise when they saw one. It took until June 2012 for a coroner to finally declare that the cause of Azaria’s death was due to being ‘taken by a dingo’. No remains of the baby have ever been found. The Chamberlains divorced in 1991, after which Lindy remarried and moved to the USA for a while before returning to Australia.