When asked for their opinion on why, for instance, America got caught with its pants down at Pearl Harbor on 7 December 1941, historians tend to fall into one of two camps – conspiracy or cock-up. One school will argue that the US allowed the Japanese to attack, even pushed them into it; a scenario that must have involved more than one person, therefore (by definition) – a conspiracy. The other school will argue, with equal conviction, that the whole thing was the result of a series of mistakes (human error) by ordinary Americans not doing their jobs properly – a cock-up. Exponents of both schools are capable of presenting rather convincing cases for their side’s interpretation of events, so which one is right? Answer? I have no idea.

If you are cynical about the role of politicians in world events, you will probably align yourself with the ‘conspiracy’ group. If, on the other hand, you are cynical about the human race in general, you will favour the ‘cock-up’ theory. Ideally, of course, you should analyse each case individually and arrive at conclusions that embrace one theory or the other, depending on the circumstances. In today’s academic world, however, that approach can be fraught with peril. Why? Because the moment an academic chooses conspiracy over cock-up, (even once) he or she is in danger of being ‘labelled’ a ‘conspiracy freak’ for all time and cast into the academic wilderness, his or her reputation as a credible historian shredded beyond repair.

Consequently, any questioning of ‘official’ explanations is done at considerable risk to the foolhardy soul posing the question. Far too many historians take the safe way out. They accept the official story and holler ‘cock-up’ at the tops of their voices. For some reason, government officials and politicians can put up with being accused of incompetence, even of making brain-dead mistakes a child wouldn’t make, but try accusing them of being dishonest or treacherous and watch the feathers fly. I should point out at this stage that I have a son-in-law who is a politician (belonging to a party I would not vote for if my life depended on it), and he is a man of the highest integrity, neither incompetent nor treacherous, so there are always exceptions to the rule. Hence, I try not to deal in absolutes if I can help it. Unfortunately, now and again I slip up, and I apologize. Cock-up, not conspiracy, I assure you.

When researching documents and the like, historians of both schools continually encounter the same problem. Lack of information. The first thing you learn as a historian is that you will nearly always be dealing with fragmentary information. Whatever the topic you choose to research, you will usually have only bits and pieces to work with. Take, for example, the destruction of Pompeii in 79AD. Here we have an enormous amount of information to look at, an entire preserved city in fact, an absolute rarity in historical research. But, even so, that extraordinary pile of data is miniscule when compared to what was known about the disaster at the time but never recorded. Some survivors have given their interpretations of what they saw and experienced on the day, but the thousands of people who died in the disaster had no time (or inclination, of course) to record their feelings, their stories. And that is how historical evidence and data survives to this day. In fragments. The personal viewpoints of a handful of the millions that lived through a particular era or event are usually all historians have to work with. The rest is surmise, educated guesswork based on the scant knowledge available. No wonder historical events are open to interpretation. Not only is data limited, but that which we have may have been recorded for a reason. The recorder, the witness to history, may well have had an agenda, may even have been writing under instructions or threat. He or she might have harboured a grievance (personal, political, religious, racial), and deliberately falsified, twisted or exaggerated details to meet that end. They say history is written by the winners, and it is true. British historians after the battle of Agincourt praised the English archers and their tremendous victory over the French knights, but the bit where King Henry ordered his men to cut the throats of the hundreds of French wounded was conveniently left out. English writers left it out. French writers put it straight back in again. Sadly, not every historical event is blessed with accounts from both sides, honest or otherwise. No doubt, if Hitler had won the Second World War, the Nazi account of the conflict would have made him out to be a knight in shining armour and portrayed Churchill as a war criminal. That, unfortunately, is the nature of the beast. 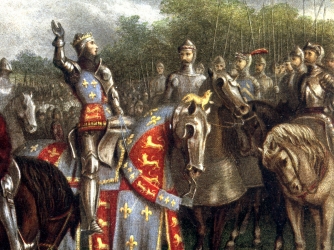 I can recall the debate that raged back in the sixties and seventies over the impact of cigarette-smoking on health. The medical profession versus the tobacco industry. For every ‘expert’ produced by the doctors, the tobacco people presented an even better-credentialed ‘expert’ of their own to refute his or her findings. I distinctly remember seeing one tobacco industry spokesman, a surgeon with a row of letters after his name, vowing with all the conviction he could muster that, not only did cigarette-smoking do no harm, but it was actually good for one’s health! I often wonder what happened to that lying son of a bitch. I hope he got lung cancer. Perhaps, he was paid a fortune to lie, perhaps he was coerced or blackmailed. Who knows? But the man surely had an agenda of some kind.

I do not know how many billions of human beings have inhabited our planet since the first caveman grunted, but a quick look at any cemetery on Earth will tell you that about 99.99% of those billions left no evidence behind, not even their bones, to indicate that they ever even existed. If you were to choose to write a history book on how it felt to be a peasant in, say, a tiny country town in Turkey in the year 122BC, how much authentic data could you come up with? Not much, I’ll wager. Probably nothing. There may be a few remnants of artefacts dug up from around that time in that general vicinity, and some overly zealous historian possessed of a vivid imagination and with nothing else to do, may even have penned a small volume about it. But that’s about it. You might decide to go ahead regardless, even if that entails ‘embellishing’ what is known, ‘fleshing it out’, so to speak. A proper historian would never do that, of course. Twenty years down the track, however, that same proper historian might accept portions of your book as authentic, and use them in his or her own book on the subject, without taking quite enough care in authenticating all your claims. And that is how myths and historical misconceptions blossom and perpetuate themselves. Modern historians stand upon the shoulders of their predecessors, even if some of those shoulders are not always attached to men of integrity.

Getting back to the ‘conspiracy or cock-up’ argument, I have a good friend, a historian, who is firmly cemented in the ‘cock-up’ school. I will not mention his name, because if I did, he would in all probability leap from his wheelchair, race around the corner to my house and throw rocks on my roof! He is very conservative, has a PhD in History, and is far smarter than I will ever be, but he has already branded me as a ‘conspiracy freak’ time and again, simply because I refuse to accept every official explanation as gospel – as indeed he does. He will read this (I think), so I will take the opportunity to list my ‘interpretations’ of major historical events as I see them. (Read ‘em and weep GB.)

Stalin’s death – probably a conspiracy. A lot of his Kremlin cronies wanted him gone before the next round of purges in case they were on his hit list – and most of them were.

The Balibo Five – murdered by Indonesians, conspiracy. The Indonesians know it, Whitlam knew it, Fraser, too. Every man and his dog in Timor knew it, too. Most Australians couldn’t care less.

Prince Harry – James Hewitt’s son, conspiracy. The chances of Prince Charles (or Danny DeVito for that matter) being his natural father are identical. Zero. History tells us that the only people who tell bigger ‘porky pies’ than politicians are kings and queens.

9/11 – Dead-set, 100% conspiracy. And you can carve that in stone if you like. Absolutely ludicrous to believe that 20 hairy-bummed youths could completely dupe US Intelligence, SAC, the Pentagon, the CIA and the FBI for over three hours in broad daylight, fly jet airliners like seasoned pilots after five minutes of lessons in a Cessna, and perpetrate the biggest crime in history! And when you toss in the 24/7 surveillance of ‘suspected terrorists’ by Interpol, the Mossad, Scotland Yard, MI5 and a dozen other affiliated organizations, none of whom suspected a thing, it gets even more unbelievable. Pull the other one, Mr Cheney. I refer to the Vice-President and former head of the CIA, and not the President, because dopey George W Bush would be hard-pressed to run a chook raffle without help, much less something of this magnitude. Besides, Cheney and Defense Secretary Donald Rumsfeld were running both the white House and the Pentagon that day. And if you think the US hierarchy would not attack its own citizenry, then I suggest you look up Operation Northwoods and have a little read.

Pearl Harbor attack – totally undecided. Could be one or the other, or a bit of both. England desperately needed America in the war. Roosevelt felt the same way, but was hamstrung by the US electorate who wanted to stay out of it. He needed a catalyst and got one. Shades of 9/11. As soon as Bush and Cheney blamed the Iraquis for the attack (even though they had nothing to do with it), it was a simple task to get the so-called ‘Coalition of the Willing’ to invade. Toss in a bogus ‘weapons of mass destruction’ easter egg hunt and Robert’s your father’s brother.

Amelia Earhart’s disappearance – ran out of gas and crashed, cock-up.

Anastasia’s survival – she didn’t. Killed in 1917 with the rest of the family.

Hitler’s survival – he didn’t either. Suicided in the bunker in 1945.

Jack the Ripper’s identity – who knows? Probably a ‘nobody’ whose name has never even been mentioned yet. No conspiracy of silence or cover-up, however. Cock-up.

The Bermuda Triangle disappearances – cock-ups and bad luck, nothing more.

So, there you have it. Are you a ‘conspiracy freak’ or a ‘cock-up enthusiast’? Or a bit of both?