Paramount did not think much of the source material for this picture. But Alfred Hitchcock did. Recognizing its potential, he anonymously purchased the screen rights to Robert Bloch’s novel for a paltry $9,000, then went around buying up as many copies as he could find, just to keep the ending a secret. He also had the entire cast and crew swear an oath not to divulge any of the plot to anyone. Still not satisfied, he withheld the final ten pages of the script until he was ready to shoot them. Paramount were convinced that the picture would flop and pressured Hitch to defer his standard $250,000 directing salary in lieu of 60% of the film’s net profits. As we know now it was a runaway success and resulted in his personal earnings from the movie exceeding $15 million, the equivalent of over ten times that amount in today’s dollars. Although the picture bears Paramount’s logo at the top, by the time principal photography had commenced Hitch had moved his offices to Universal, so the movie was shot on that studio’s back lot. This explains why Norman Bates’ spooky house forms part of the Universal tour today. The actual design of the structure was copied from a 1925 oil painting by Edward Hopper (titled ‘House by the Railroad’), that resided in the Museum of Modern Art in New York City.

Hitchcock deliberately chose to shoot Psycho in black and white for several reasons. One reason (a minor one) was because he thought it might be too gory in colour. The main reason, however, was because his $1 million budget did not stretch very far at all. The third reason demonstrates the man’s astuteness. He reasoned that if so many bad black and white movies could make money at the box-office, how much more money would a good black and white feature make? 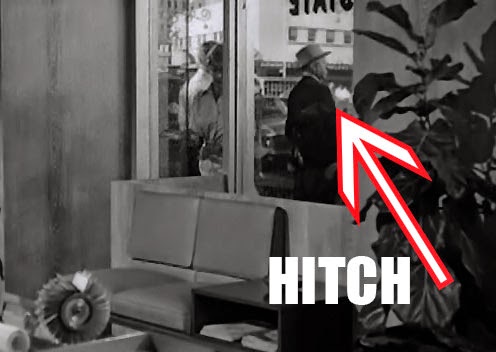 Hitch always gave himself a cameo in his movies and Psycho was no exception. He was aware, however, that a great many cinema-goers enjoyed looking for and spotting him during the screenings. He did not want that to distract them from the plot, so he dispensed with the issue by putting in an appearance very early in the movie. Speaking of his cameos, when he made Lifeboat in 1944, this posed a serious problem because the action takes place in a single lifeboat containing a handful of people. Clearly, he could not physically be in the lifeboat, so he arranged for a newspaper to float by containing his picture as part of an advertisement for weight loss!

He recognized the value of an appropriate musical score in his movies. Bernard Herrmann’s memorable score for Psycho was, according to the director, responsible for a third of the picture’s success. The entire score is played only by stringed instruments and the shrieking violins that accompany the scariest moments in the movie are what many patrons recalled most. So pleased was Hitch with Herrmann’s score that he doubled the man’s salary to $34,501.

As part of the publicity campaign Hitch told reporters: ‘It has been rumoured that Psycho is so terrifying that it will scare some people speechless. Some of my men hopefully sent their wives to a screening. The women emerged badly shaken but still vigorously vocal.’ Of course, it was all tongue in cheek, part of his overall promotion plan that even warned patrons they would be removed ‘by force’ if they attempted to get into a showing after the movie had commenced. 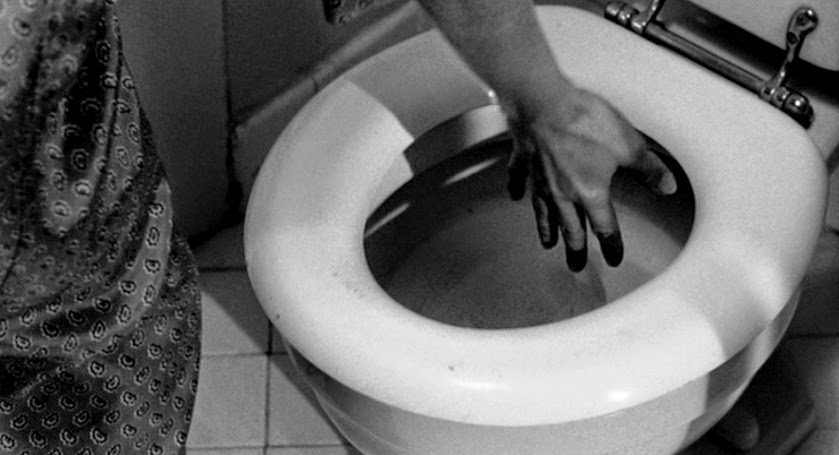 History in the making

For some moronic reason the censors would never allow a toilet to appear in a feature film. Joseph Stefano wrote the Psycho screenplay and he was adamant that Hitch’s picture should have a toilet in it and that it should be shown being flushed as well. This was very dangerous ground he was treading. It did not pay to aggravate the censors. Hitchcock advised him that the only way they could achieve this was for Stefano to incorporate into his screenplay a ‘plot reason’ for the flushing! So he came up with one. He had Janet Leigh’s character (Marion Crane) use a piece of paper to add up the money she had stolen – and then flush the paper down the toilet. And the ploy worked. Evidently, whereas the censors could not handle a toilet flushing away evidence of a natural body function, they were comfortable with it flushing away evidence of a crime. So, the next time you watch Psycho you might appreciate that you are watching history in the making – the flushing of a toilet in an American motion picture for the very first time ever.

The shower scene is probably the most identifiable moment in Anthony Perkins’ entire career, yet he was not even present when it was shot. He was in New York, rehearsing a play, as his ‘double’ butchered Marion Crane in arguably the most memorable murder scene in Hollywood history. ‘Actually, the first time I saw Psycho and that shower scene was at the studio’, he said later. ‘I found it really scary. I was just as frightened as anybody else.’ Janet Leigh wore moleskin patches over her private parts when filming the scene, but the warm water washed them off during the multiple takes. Hitchcock chose to do one more take, minus the moleskins, and that was the one used in the final print. Perkins was a homosexual and would perish from AIDS in 1992. His first ever intimate heterosexual experience was with actress Victoria Principal when he was 39 years old. ‘It was a case of spontaneous combustion’, he said. ‘I tried everything I could think of because I thought I might never get another chance.’ For reasons never fully explained, Kim Stanley turned down Psycho because of her reservations about working with him. He contracted AIDS during the shooting of Psycho III in 1986, but kept it secret until the National Enquirer illegally obtained a blood sample of his and had it tested in 1990. Two years later he was dead. Back in 1973 he had married actress Berry Berenson, a union that produced two children and ended with his death nineteen years later. He adored her. In 2001, Berry was aboard Flight 11 when it crashed into the North tower of the World Trade Centre. Hitchcock had cast Vera Miles in The Wrong Man in 1956 and thought she was terrific and had plans to turn her into a star of the greatest magnitude. When she was forced to withdraw from the lead in Vertigo two years later after falling pregnant he was furious. Vera would land the role of Lila Crane in Psycho, but she always felt Hitch punished her throughout the shoot for choosing family over fame and fortune.

Universal insisted on casting John Gavin as Marion’s lover. Hitch wanted Stuart Whitman or Rod Taylor but reluctantly bowed to their wishes. Gavin had the looks but he was a very wooden actor. Hitch referred to him as ‘the stiff’, declaring that his performance was quite possibly the scariest thing in the movie. A totally fictitious rumour persisted for years that George Reeves (TV’s Superman) had completed several scenes as the detective, but had died before he could finish the picture. In fact, George had died months before Hitch had even considered making Psycho. The superb character actor Martin Balsam was cast as the detective. 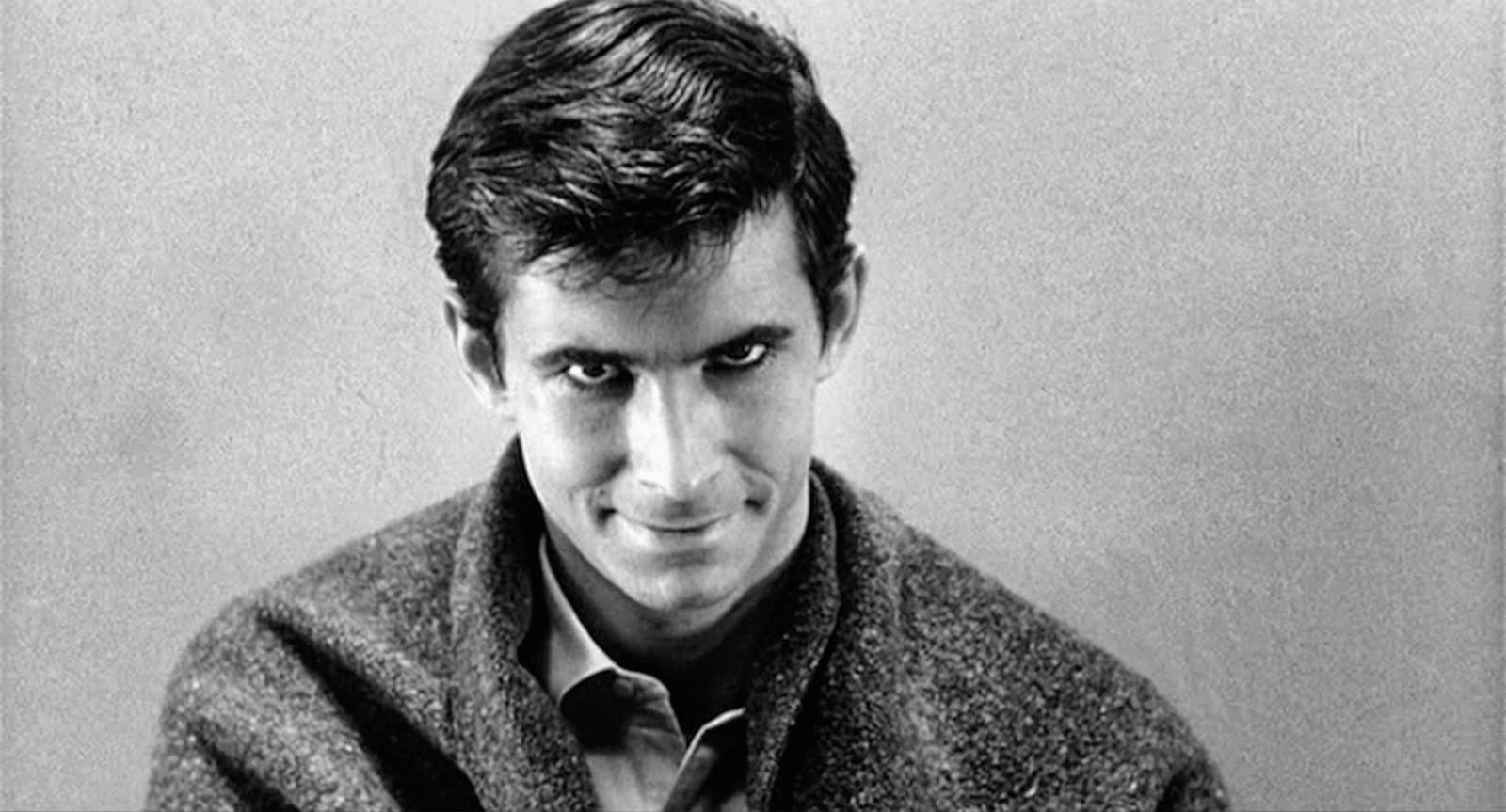 For its time Psycho was as scary as Jaws would be a decade and a half later. Both pictures seem a little tamer these days. The combination of Herrmann’s score, Perkins’ spooky performance and Hitch’s brilliant idea to have his female lead killed off early in the picture, turned Psycho into a classic. Personally, I found the murder at the top of the stairs especially scary, but maybe that was because I was 13 and a boy when I first saw it. There is no doubting which scene scared the opposite sex most. And who could blame them?