Deliverance (1972) was the picture that turned Burt Reynolds into a superstar. The first choice for his role, however, was Marlon Brando, the second Henry Fonda; the third James Stewart. Charlton Heston was also approached. Lee Marvin was asked to play the role that later went to Jon Voight. None of them accepted, primarily because of the risks involved negotiating Georgia’s Chattooga River where much of the action was to be shot. Marvin reckoned he and Brando were too old anyway and that the producers needed to look at choosing younger actors, so Reynolds and Voight were approached. A year after the picture’s release thirty people lost their lives on the Chattooga trying to emulate the adventures of the film’s characters. The actors did their own stunts. Voight actually climbed the cliff, although he did so in daylight, a bluish tint added later in post-production. Reynolds painfully broke his coccyx going down the rapids. It was not an easy shoot by any means, yet in order to reduce costs neither the production nor its stars were insured. Oddly enough, of the four stars only Ned Beatty (the least athletic-looking of them) had ever canoed before. Ronny Cox is double-jointed, so he suggested that he should twist his arm over his head for the scene where his dead body is found in the river. It looked really effective.

Sixteen year-old Billy Redden was selected locally from his school in Rabun County, Georgia to play the banjo-playing hillbilly, even though he could not play an instrument at all. With his big head, thin body, oddly-shaped eyes and somewhat moronic grin, he was chosen entirely for his ‘in-bred’ looks. During the ‘Dueling Banjos’ scene another boy, a skilled banjo player, played the chords by reaching his arm around Billy who pretended to do the picking. Musicians Eric Weissberg and Steve Mandel played the tune on the soundtrack and later recorded it as a single. Incidentally, ‘Dueling Banjos’ features a banjo and a guitar, not two banjos at all.

The much talked about rape scene was scripted to contain a lot of swearing, too much for TV viewers in fact, so producer John Boorman used the ‘squeal like a pig’ dialogue in its place. He thought it worked better that way and decided to keep it in the movie. The scene was completed in just one take, mostly because Beatty did not want to film it repeatedly. Actor Bill McKinney, who played the mountain man who rapes Beatty’s character, adopted ‘squeallikeapig.com’ as the name for his website.

Reynolds wrote a detailed account of how he saw the rape scene, and it was none too complimentary towards the protagonist McKinney. ‘McKinney turned out to be a pretty good guy’, he said, ‘who just took ‘The Method’ way too far. Staring straight at Ned, he whispered, ‘I’ve always wanted to try that. Always have.’ When it came down to shooting it’, Reynolds continued, ‘Herbert Cowboy Coward and McKinney were hands-down brilliant. Scared the shit out of everybody who saw the movie. But McKinney, I swear to God, wanted to hump Ned. And I think he was going to. He had it up and he was going to bang him. It’s the first and only time I have ever seen camera operators turn their heads away. Finally, I couldn’t stand it anymore. I ran into the scene, dove on McKinney, and pulled him off. Boorman, hot on my tracks, helped hold him down. Ned, who was crying from both rage and fear, found a big stick and started beating him on the head. Half a dozen guys grabbed Ned and pulled him away. We separated the two of them and let things cool off.’ This, by the way, was Beatty’s first film. Welcome to acting in the movies, Ned. In fairness to McKinney, he disagreed with Reynolds’ description of what happened. ‘If you lose control on a movie set’, he said, ‘it’s not acting, it’s indulgence.’

Having watched thousands of movies I tend to expect certain things to happen in certain situations, but the refreshing thing about Pulp Fiction (1994) is that almost nothing I expected actually eventuated. It was almost as if director Quentin Tarantino said to himself, ‘OK, I am going to discard whatever would normally take place in any given situation, and in its place come up with something completely unexpected.’ And it worked.  He came up with a wonderfully entertaining drama that maintains a high level of interest and anticipation throughout. When next you watch this remarkable movie take particular note of the number of times you are drawn into thinking something will occur – and then it doesn’t. 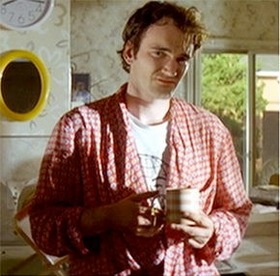 Tarantino acts in the picture, by the way. He plays Jimmie Dimmick, the guy whose home is the scene of the ‘clean-up’ orchestrated by ‘The Wolf’ played by Harvey Keitel. This picture resurrected John Travolta’s flagging career, yet the part of Vincent Vega was written specifically for Michael Madsen. If he hadn’t opted to play Virgil Earp in the Kevin Costner biopic Wyatt Earp he would have taken it and Travolta’s career may well have died a quiet death. Wyatt Earp was not a success and Madsen rued his decision. Bruce Willis wanted the role of Vincent and was disappointed when it went to Travolta.

In the scene where Travolta plunges the hypodermic full of adrenalin into Uma Thurman’s heart, the trick was to have the needle already in place in her chest, then have Travolta withdraw it at speed. The whole thing is then run backwards creating the impression that he had just slammed it into her chest. You will see a mark on her chest disappear when she is revived. Fans of Christopher Plummer as Captain von Trapp in The Sound of Music would probably be surprised to learn that the actress who plays the foul-mouthed robber, Honey Bunny, in Pulp Fiction is his real life daughter Amanda. Equally surprising is that she was nominated for a Tony Award in 1987 for her stage role as Eliza Doolittle in Pygmalion opposite Peter O’Toole’s Henry Higgins. At 14 she passed an audition at the Belmont Racetrack to be a jockey, riding for Alfred Vanderbilt’s stable. The only downside to Pulp Fiction, in my old-fashioned opinion, is the language. The word ‘fuck’ is used 265 times, a hefty percentage of those by Amanda Plummer’s character who is only in the movie for a short time. Surely good writers can produce convincing dialogue of quality without resorting to such excesses. The writers of yesteryear certainly could.