Yesterday I stole 203 minutes out of the remainder of my life and watched the Liz Taylor, Rock Hudson and Jimmy Dean 1956 blockbuster Giant. I have certainly seen worse movies, but two hundred and three minutes! I found Rock and Liz to be far better than I expected, but I am still to understand what all the fuss was about Jimmy Dean. Half the time he was incoherent, the other half he was just difficult to understand. Compared to him Brando was America’s answer to Sir John Gielgud, yet Jimmy boy got himself nominated for Best Supporting Actor. Equally surprising (to me anyway) was the nomination for Mercedes McCambridge. She was scarcely in the picture, a totally unmemorable performance if there ever was one. Rock deserved his nomination even though he didn’t win.

Carroll Baker plays Liz’s daughter even though in real life she is actually nine months older than her. Liz was born in 1932, Carroll in 1931. Similarly, Dennis Hopper was just four years younger than Liz, yet he plays her son. Dean was a Method actor. He and director George Stevens did not get along during the shoot, regularly arguing over Jimmy’s use of mannerisms in his performance. Dean referred to Stevens as ‘fatso’, which another source of discontent. After being called to the set three days in a row and not used, Jimmy decided not to turn up on the fourth day when his scenes were to be shot. He and the director were again at loggerheads. Dean’s principle photography was eventually completed on Friday 23 September 1955. A week later he was dead. Nick Adams’ voice was used for a couple of his lines that needed redoing.

Dennis Hopper at the time on the set of Giant

Hudson and Dean did not get along on the set either. Years later it was said that Jimmy had rejected Rock’s advances off-screen and that that was the reason for the animosity, but there seems little evidence to back that up. What was known, however, was that Rock had no time for ‘Method Acting’ or for Dean’s unprofessional conduct. Even so, Hudson’s ex-wife Phyllis Gates has since written that he wept when he heard Dean had been killed in a car crash. ‘Rock couldn’t be reached’, she wrote. ‘He was overcome by guilt and shame, almost as though he himself had killed James Dean.’ Read into that what you will.

Liz and Jimmy, on the other hand, became firm friends during the shoot, staying out together all night on several occasions. Cast and crew had little doubt they were intimate, especially when they turned up on the set holding hands. Liz was married to Michael Wilding at the time and the marriage was on rocky ground despite her having just given birth to their son Christopher. She divorced Wilding in January 1957. When she learned of Jimmy’s death a few weeks later Liz was inconsolable and given two weeks away from the set to recover. She was said to have spent a few days in a psychiatric hospital as well. When Oscar time came around she refused to attend unless the Academy agreed to award Dean a posthumous statuette, something they were not prepared to do. Jimmy & Liz during a break on the set

Director George Stevens gave Hudson the choice of leading lady between Grace Kelly and Elizabeth Taylor. He chose Liz and they became lifelong friends. Some still say they were more than just friends. Phyllis Gates strongly believed her husband and Liz became lovers while making Giant. Was Liz sleeping with both her co-stars? I doubt it very much. Her desolation over Dean’s death seemed more than the usual reaction to the demise of a colleague, so much so that it would be stretching things a bit to believe she was alternating between him and Rock. She did have a tendency to fall in love at the drop of a hat so to speak, but she usually did so one man at a time.

All things considered Giant was quite a bold undertaking for the 1950s given its focus on the treatment of Latinos in Texas in the decades covered in the story. Stephens maintained an open set at the Reata house near Marfa, Texas throughout the 45 days of shooting in the Lone Star State, which in itself exposed him to the wrath of Texans unhappy with his stance on racial issues in their state. Nevertheless, he stuck steadfastly to his guns, determined to get his anti-racism message across. Even today (2015) the segregated cemetery for Latinos in the little town of Marfo that existed in 1955 is still there, complete with barbed wire separating it from the other side reserved for Anglos.

Stephens’ open set policy at Reata could have backfired if the families turning up to watch the shooting had lodged official complaints about Dean’s behavior on some days. Several members of the crew (Stevens among them) recalled how he would unzip his fly and urinate in front of bystanders whenever he felt the urge. He told the director that exposing himself to a couple of thousand onlookers without feeling embarrassed helped him gain confidence for when it came time for him to act in front of the film crew. Opinions of the man as an actor range from great admiration to  a belief that he was greatly over-rated, but most opinions of him as a man were less than complimentary. Take Hudson’s for instance. When asked his opinion of Dean some time later, Rock replied: ‘I don’t mean to speak ill of the dead, but he was a prick…selfish and petulant.’ 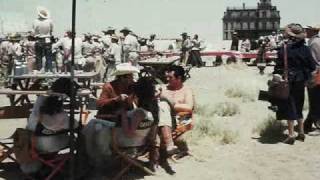 Onlookers and crew at Reata 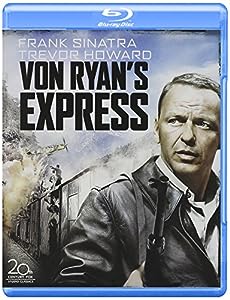 The World War Two action film Von Ryan’s Express (1965) still holds up reasonably well today, although only if you accept a few aspects with the proverbial grain of salt. For instance, Frank Sinatra’s character Colonel Ryan is the only officer in the POW camp with any common sense. The fact that he is an American and the other officers happen to be unimaginative, stiff-necked British probably still grates on many UK movie-goers. Perhaps, Alec Guinness’s Oscar-winning performance in 1957’s The Bridge on the River Kwai convinced American producers that all British officers were martinets. Trevor Howard’s character here may simply be a legacy of that.

A decidedly more unforgiveable aspect (in my view) is the absolutely sympathetic approach to the Italians in the picture. I think we are expected to believe that the war had nothing to do with them, that they were merely dupes of those bloody Germans who pretty much took over their country and made life tough for them. Er…sorry, but for four years the Italians were very happy to hang onto the shirt-tails of the Nazis and to share in whatever scraps were tossed to them off the ‘spoils of war’ table. Why do I get the feeling that the producers of Von Ryan’s Express had the Italian-American market in mind when they settled on the plot and script? Of course molly-coddling a potential market goes on in the movie business all the time. If you watch Saving Private Ryan (1998), for example, you will not hear the word ‘Kraut’ uttered anywhere. Why? Because the German market is huge, so to hell with historical accuracy. The battle sequences are pretty poorly done here as well. German soldiers go down like dominoes every time a gun is fired in their general direction, yet they do not seem capable of hitting a damn thing while they are blasting away. Nazis were certainly lousy human beings, but incompetent soldiers they were not. And not a wounded German in sight. Killed the whole lot outright. There is more realism in an X-Box game.

It was on the set of this movie that Frank Sinatra first met Mia Farrow. She arrived one day at the invitation of English pop singer/actor Johnny Leyton and was introduced to Old Blue Eyes. She and Leyton had met when they made Guns at Batasi in 1964. By July 1966 Mia and Frank were husband and wife. The marriage only lasted two years, an outcome that did not surprise Leyton in the least. He was about 25 years old when he met 18 year-old Mia who shuddered when she found out his age, declaring him to be ‘really old’. She would be 21 when she wed Frank who had already turned fifty. 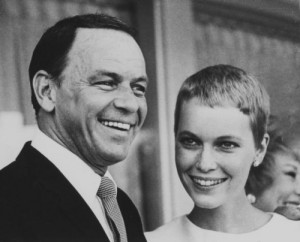 Michael Goodliffe plays Captain Stein here. Most movie fans will be hard pressed to picture him, but he made several fine contributions to some very decent British movies. He played the RAF interrogator in 1957’s The One That Got Away and Thomas Andrews, the designer of Titanic in A Night to Remember (1958). In real life he was wounded in the leg at Dunkirk in 1940, captured by the Germans and spent five long years in a prison camp. In 1976, at the age of 62, he committed suicide by leaping from the roof of a Wimbledon hospital. A sad end to a fine actor.

Michael Goodliffe in A Night to Remember