For the life of me I cannot understand why critics rave about Hitchcock’s 1958 so-called ‘classic’ Vertigo. I watched it again yesterday and my opinion of it, if anything, was reinforced. It is as ordinary as dishwater. Take the opening sequence, for example. It is just plain stupid. A criminal is fleeing across rooftops, pursued by a uniformed policeman who is, in turn, followed by Jimmy Stewart’s character, a detective. The criminal leaps onto a sloping, shingled part of the roof (almost vertical) and scrambles up and over it. The policeman does likewise, but Jimmy loses his footing and ends up hanging by his fingertips from the guttering about a hundred or so feet above the alley. The policeman then returns, edges his way down the sloping shingles, holding onto nothing as he does so, reaches out to Jimmy and yells, ‘Take a hold of my hand’. Of course, the thought flashes through my mind (and the minds of everyone else except Hitch) – Well, that’s not gonna work. Even if Jimmy manages to grab the man’s outstretched hand – what then? Well, we will never know because the policeman suddenly topples off the roof and is killed. Stupid is as stupid does. The camera then pans back to Jimmy, still hanging by his fingertips, and millions of movie-goers are already asking the next question. OK, now what? You put your star into this situation, Hitch, so it is up to you to extricate him. Of course, there is no way out of it, so he simply cuts to Jimmy recuperating months later. They used to have the same kind of ‘cliffhangers’ for little kids in saturday morning matinees. The hero would plummit over a cliff in a fiery wagon and we would go home speculating on how he could possibly escape this seemingly hopeless predicament. Next week’s episode would show him leaping to safety just before the wagon sails over the cliff. Pretty dumb (even for a kids’ show), but at least they made an effort to explain themselves. In Vertigo Hitchcock does not even bother. And that is, in my opinion, disrespectful to the poor slobs (like me) who paid to see his movie.

Jimmy pretending to be very scared

I think that is what bugs me about Hitchcock films. He tends to sacrifice logic for suspense and plot, and in so doing treats his audience as if they were sheep. And the plot of Vertigo is pretty lame anyway. Without giving away too much, how many killers would go to the ridiculously elaborate lengths employed in this picture? And how many 24 year-old beauties like Kim Novak fall hopelessly in love with 49 year-old guys? And Jimmy Stewart looks ever minute of his 49 years in this. Of course, Hollywood movie-makers have always felt comfortable with love stories involving young goddesses and aging male stars, but it is rarely the norm in real life. Interestingly, Hitchcock blamed the commercial failure of the film on his leading man, complaining that Stewart was ‘looking too old’ to attract audiences anymore. So, why not get a younger actor for the lead? Was Stewart’s selection more of, ‘oh, the audience will accept him because I will tell them to?’ The same ‘suspension of logic’ applies to another of his ‘classics’, The Birds. Maybe one in a thousand people have a genuine fear of our feathered friends, but the vast majority of people do not, yet he makes this silly movie about homicidal flocks winging about and we are supposed to spill our popcorn all over the theatre simply because he tells us to. Classic my eye! On its release Vertigo was panned by the critics, yet today it is considered to be a Hitchcock masterpiece. In 2007, the American Film Institute rated it as # 9 in the list of all-time great movies. Even more astonishing, in 2012, Sight & Sound’s critics’ poll named it as the ‘greatest film of all time’, replacing Orson Welles’ Citizen Kane. Are they serious? It has a totally unbelievable plot, the wrong cast, and it plods along like Napoleon’s troops retreating from Moscow. Jimmy overacts like mad and Kim hardly acts at all. But it is Hitchcock so it must be good! 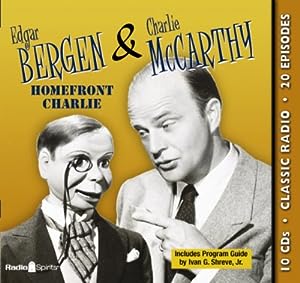 Edgar Bergen really was a unique phenomenon in the entertainment world even though he only appeared before the cameras 55 times (in movies and on TV), and that was over a period of forty-six years! So, why should he be classed as a phenomenon? Because the guy was a ventriloquist! Furthermore, he was a ventriloquist who hit it big on, of all places, the radio. With his dummy, Charlie McCarthy, he struck a chord with Americans in the Depression decade, to the extent that he became the most sought after act in the land. Whether it be on radio, in theatres, at clubs or even on the silver screen, Edgar and his alter-ego were adored by fans of all ages.

Edgar was just 16 in 1919 when he paid a Chicago wood carver $36 to create a likeness of an impish Irish newsboy he knew. The head went on a dummy that would become famous across America as Charlie McCarthy. Seventeen years later a couple of radio producers saw Edgar perform with Charlie at New York’s Rainbow Room and booked him for an engagement on singer Rudy Vallee’s radio program. The rest, as they say, is history. Despite all rhyme and reason the duo became a sensation. A ventriloquist act on the radio? Logic-wise, it was the equivalent of Abbott & Costello doing ‘Who’s on first?’ in a silent movie.

A year after debuting Edgar had his own radio show. It would run (at two different networks) for 19 years. He was also signed by the shrewd Sam Goldwyn to appear in his 1938 movie The Goldwyn Follies. Sam had an uncanny knack for picking winners in the entertainment business. He cunningly signed Edgar straight after the Rudy Vallee debut for just $400 a week for eight weeks. A month later the act was being booked all over the place for ten times that amount. For some reason Edgar and Charlie did not have quite the same appeal on the screen that they enjoyed in other mediums, but then barely anything about their enormous success made sense anyway.

Of course, there was more to the act than just the trick of throwing one’s voice. Bergen had the ability to create an interesting and funny persona for Charlie, plus the gift of exquisite comedic timing to pull it off. He could also stretch the boundaries of censorship as well. Charlie McCarthy could get away with a lot more than real actors could at the time. For example, Mae West would have had no chance of responding on screen as she did to Charlie on the radio:

Charlie: ‘Not so loud, Mae. Not so loud. All my girlfriends are listening.’

Mae: ‘You weren’t so nervous and backward when you came up to see me at my apartment. In fact, you didn’t need any encouragement to kiss me.’

Mae: ‘Why, you certainly did. I got marks to prove it. An’ splinters, too.’

Such innuendo from Mae would never have made it past the censors, yet Bergen seemed to be able to hoodwink them regularly with his scripts. On October 30, 1938, Orson Welles’ ‘War of the Worlds’ was aired on radio across America, resulting in scenes of outright panic in several areas when many Americans truly believed their nation was under attack by aliens from outer space. The panic, as bad as it was, could have been far greater had not the majority of radio listeners not been tuned in to Bergen and McCarthy that night instead of to Welles. Even so, when Edgar went to his customary musical interlude during the show, many listeners immediately switched stations and caught the tail end of Orson’s dramatization of the Martian invasion. They, too, panicked.

Edgar’s marriage to 19 year-old Frances Westerman in 1945 produced a daughter in 1946 who would achieve fame in her own right as Candice Bergen. Frances also acted (as Frances Bergen) in films and in a 1958 TV series called Yancy Derringer. Candice’s resemblance to her beautiful mother is most evident. Bergen’s radio show lasted until July 1956 when sponsors became committed to promoting TV shows over radio. The Charlie McCarthy Show had by then been transformed into the Edgar Bergen Hour, but the writing was very clearly on the wall. For a ventriloquist to survive nineteen consecutive seasons on the radio was in itself a freakish achievement, testament to the ability of Edgar to change his content to fit the times. Bergen passed away in 1978, just three days after announcing his retirement from show business. He was 75 and died in his sleep. As for his dummy Charlie McCarthy, well, there were in fact three of him. One now resides in the Smithsonian Institution, the second is at the Museum of Broadcast Communications in Chicago, and the third was purchased by magician David Copperfield for $110,000.