He was born Joe Yule Junior in Brooklyn, New York City at the commencement of the Roaring Twenties and took the stage in his parents’ vaudeville act at the tender age of seventeen months. At the age of six he made his first movie, a short, before starring as Mickey McGuire in a series of pictures that began in 1927. In A Family Affair (1937), however, he introduced the character Andy Hardy to audiences around the world and it would make him the hottest box-office star in motion pictures by the 1940s.

Mickey was about to celebrate his 19th birthday when Britain declared war on Germany in September 1939. ‘I wanted to join the fight then and there!’ he later wrote. His boss LB Mayer, however, was not about to lose his biggest money-earning star, so he convinced the draft board that Mickey could be put to far greater use selling war bonds coast to coast. ‘I put up no objections’, Rooney said, ‘and I did get out and sell.’ He and Judy Garland joined ‘The Metro Bond Train’, crisscrossing the nation, selling bonds and doing up to ten shows a day. ‘It was absolutely exhausting’, the diminutive super-star recalled.

Just about every star in Tinsel Town, not committed to a film shooting schedule, agreed to sell war-bonds. From January through to August 1942 the Hollywood War Activities Committee and the Treasury Department organized an extravaganza called ‘Stars over America’, in which three dozen screen actors and actresses were organized into seven groups that visited 353 cities and towns in the month of September ‘42. The month-long tour sold $775 million worth of bonds, just one of numerous bond-selling enterprises that traveled around the nation until peace was declared. Selling kisses was a lucrative money-raiser, although the variations in prices were a little puzzling. Lana Turner’s going price, for example, was a whopping $50,000 per kiss while Hedy Lamarr’s went for only half that, a highly respectable $25,000 each. For some reason Marlene Dietrich only charged $1,025 per smooch and Frank Sinatra’s went for a paltry $100 each! Nobody much wanted to kiss Mickey at any price, it appears.

In 1940, the Office of Inter-American Affairs sent a group of motion picture stars on a goodwill tour to Latin America. Among those chosen were Mickey, Robert Taylor, Lana Turner, Norma Shearer, Jimmy Cagney, Tyrone Power, Bing Crosby, and Desi Arnaz and his band. The ‘big romance’ of the tour was the Rooney-Shearer affair which, considering the age difference, stunned insiders. Mickey was still only nineteen, whereas the recently widowed Norma was twice his age! Mayer put a stop to their hot romance the moment he learned of it. Both quickly moved on to others.

By September 1942, Mickey was wed to newcomer Ava Gardner and was anything but eager to go into the services. He believed his stunning bride would probably stray if left alone. He was right, of course, but it was very much a case of ‘the pot calling the kettle black’. After all, Rooney himself was a chronic adulterer. Not surprisingly, the marriage ended in May 1943. ‘You know, Mick, I’m damn tired of living with a midget’, Ava told him. By then he had been reclassified as 1-A, and ordered to report for duty with the US Army in thirty days. He asked Ava out to dinner on his final night and they wound up in bed together. ‘Mickey, when you come back, I’ll be waiting’, she promised. However, a few weeks later she telephoned and asked him to stop writing her! On his first furlough he made a surprise visit to her apartment, only to discover her with her latest lover, billionaire Howard Hughes. A brief scuffle, followed by the consumption of two bottles of Dom Perignon, saw Mickey exit Ava’s life forever. ‘Mickey, don’t get your ass shot off’, was Hughes’ parting advice. 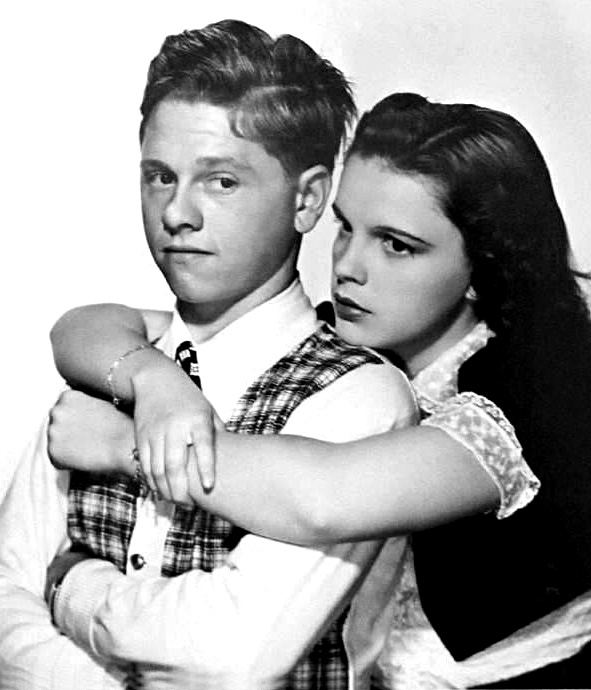 As Andy Hardy alongside Judy Garland

Granted a three-month extension to make The Human Comedy (1943), Mickey found himself called before the draft board at the conclusion of shooting, where he was again reclassified, this time as 4-F because of his high blood pressure. This new classification allowed him to pump out another five movies, including National Velvet with 12 year-old Liz Taylor. Mickey was 23 by then and still playing school student Andy Hardy. ‘If the people at Metro had had their way’, he wrote in his autobiography, ‘I’d have remained a teenager for forty years.’

A year later, in September ’44, he met and married Betty Jane Rase, the teenaged Miss Birmingham 1944 who would later act as B.J. Baker in the 1960s. Their honeymoon consisted of one day and one night together, (all it took for her to become pregnant with Mickey Junior), before her husband’s unit headed off to France. In Europe he usually did three or four shows a day for the troops, often right up front where there was real danger of stopping a sniper’s bullet. He gave impersonations of several Hollywood movie stars and was very good at it. Mickey did seven shows the night before the Allies crossed the Rhine. In all, his stint in the Army lasted one year, eight months and twenty-one days. 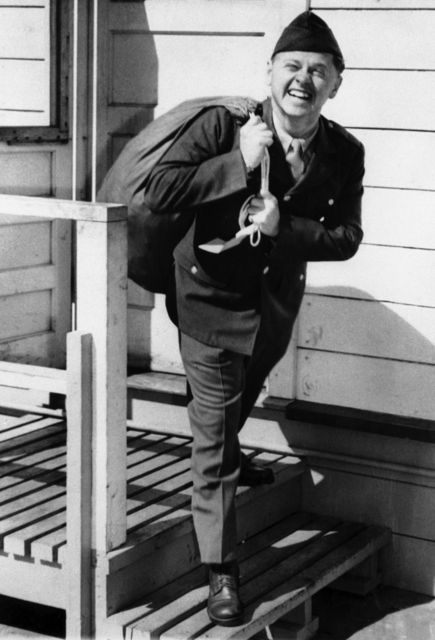 Mickey’s massive ego received a severe jolt when he returned home to Betty Jane to discover she had grown several inches taller than her days as his 17 year-old bride. In her high heels she now towered over him. She quickly fell pregnant to him again but they had little in common and she disliked all his friends. The writing was on the wall. Within three months, pregnant and all, she went home to mother and the marriage was effectively over. During the war, of the 22 months he served in the US Army, five of them were with General George S. Patton’s Third Army, during which time he attained the rank of sergeant and won a Bronze Star. The five foot two inch actor went on to marry eight women in his life and chalked up nearly 350 screen and television credits in an astonishingly lengthy career. Rooney died of natural causes at the age of ninety-three. He took his afternoon nap on April 6, 2014 and never awakened.