The 1955 Rodgers & Hammerstein hit musical Oklahoma! was actually shot in Arizona! The songs are every bit as good as those in South Pacific, in my opinion, but the movie contains an overlong dance sequence that is, frankly, boring in the extreme. Surprisingly, Rod Steiger does his own dancing in it (although it was a case of ‘no choice’ because it was impossible to find a dancer that looked enough like him to double in the sequence).

Movie-goers tend to think that the picture introduced this musical to the world, but Oklahoma! the musical debuted on Broadway in 1943, a full 12 years before, and ran for a record 2,212 performances! The title song, by the way, was adopted as Oklahoma’s state song in 1953. There is scarcely an Oklahoman since then who does not know his or her state song word for word, such was the tune’s popularity.

This movie was the screen debut for the wonderfully talented (and beautiful) Shirley Jones. Her sons, David and Shaun Cassidy, achieved enormous success in the pop music arena during the sixties and seventies, although it would not be unkind to say that neither could hold a candle to their mother when it came to singing or acting. She truly was a unique talent. It comes as no surprise either that she was runner-up to Miss Pennsylvania in 1952. Her Broadway career commenced at 18 in 1952 in the original production of South Pacific. In the 1970s she became world famous on TV as Shirley Partridge in the popular The Partridge Family series. Curiously, her step-son, David Cassidy, later admitted that he had a crush on her during the running of the show! Shirley has often said that the enormous success of the series ‘killed’ her movie career. She had become Shirley Partridge. Shirley was married to gay, bipolar actor Jack Cassidy for nineteen years (1956 – 1975). They had been divorced less than a year when she received news that he had burned to death in a fire at his apartment. Evidently, (as seems to happen far too frequently), he had drifted off to sleep while smoking a cigarette and had been consumed in the subsequent conflagration. His remains were identified through a ring on one of his fingers. In 1977 Shirley wed again, this time to comedian Marty Ingels, one half of the 60s TV series I’m Dickens, He’s Fenster. Marty was Fenster. The marriage had its ups and downs, but lasted until his recent death on October 21, 2015.

Sex siren Mamie Van Doren launched a campaign to get the role of Ado Annie. Unfortunately, Mamie’s acting coach was none other than Gloria Grahame’s mother. The lady mentioned Mamie’s interest in playing Ado Annie to her daughter and Gloria herself went after the role – and got it. Original choices for roles in movies are always intriguing. For instance, it is difficult to imagine this movie without Gordon MacRae as Curly Bill, in his place Fred Zinnemann’s first choice – James Dean! Montgomery Clift was also considered, but at that time Monty was considered for just about everything except President of the United States. Shirley Jones admits to having had a crush on Gordon MacRae when they shot Oklahoma! She was thrilled when he was asked to play Billy Bigelow in the 1956 movie version of Carousel after Frank Sinatra withdrew from the production a few days after shooting commenced. The decision to shoot every scene twice, (once in Cinemascope 55m and then in Cinemascope 35m) was given as the reason for Frank pulling the pin, but that was just the studio covering up the real reason – as usual. 20th Century Fox said Frank demanded he be paid double because he was, in effect, shooting two movies. Fox disagreed, so he walked.  According to the studio, three weeks after his withdrawal technicians figured out how to shoot in 55m and then transfer the images to 35m, thus eliminating the need to do everything twice. That was the official explanation, but Shirley said she knew what really happened. Recently she revealed that Old Blue Eyes left because of a phone call he received from his wife Ava Gardner. She rang him from Africa where she was shooting Mogambo and gave him an ultimatum – either get on a plane and meet her in Kenya or she would start sleeping with her co-star Clark Gable! Poor Frank panicked anyway and pulled out of Carousel to catch a plane. He might just as well have stayed home because the marriage was well and truly on the skids. He and Ava divorced in July 1957. The problem with this story (and it is a big problem) is that Carousel was shot in 1956 and Mogambo was released in 1953! Shirley evidently got her wires crossed.

Ava, Grace & Clark on the

set of Mogambo in Kenya.

There have been fewer more melodic male singers on screen than Gordon MacRae. His vocals in Carousel and Oklahoma! are a treat. He had issues, however. While still shooting Carousel he was picked up for drunken driving, the first public signs of the alcoholism that would grip him through the late fifties and the sixties. To his credit, by 1970 he had mastered his drinking problem and become a spokesman for Alcoholics Anonymous. In 1982 he suffered a stroke, but continued to perform whenever he could until his death at 64 in 1986. He succumbed to cancer of the mouth and jaw, a tragic and cruel end to a rare talent. 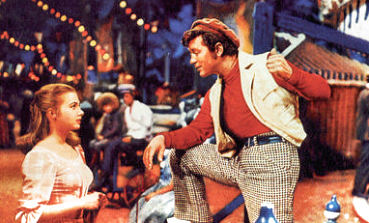 The utterly delightful Barbara Ruick plays the chirpy Carrie Pipperidge. In 1952 the 22 year-old actress met Robert Horton on the set of Apache War Smoke and they were married next year in Vegas. Horton became a well-known face on TV’s Wagon Train in which he played scout Flint McCullough from 1957 until 1962. The marriage did not last as long as his series, done and dusted by 1956. Horton turned 91 in July 2015. 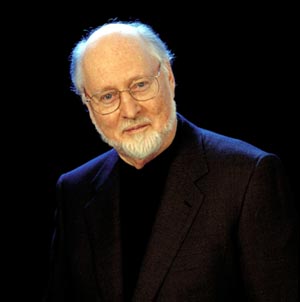 Barbara wed composer John Williams in 1956, and that union lasted until her untimely death in 1974 at the age of just 44. Williams, as you probably know, composed the themes for Jaws, Star Wars, Raiders of the Lost Ark, Superman, ET, Schindler’s List and dozens more. Their son Joseph became lead singer for the pop group Toto from 1986-9, their other son Mark was drummer for the successful group Air Supply. John and Barbara first met in high school, then much later as adults.

When it came to filming Rodgers & Hammerstein musicals it was commonplace to see songs cut from the final print. Carousel was no exception. Two of the musical’s finest songs, You’re a Queer one, Julie Jordan and Blow High, Blow Low, were both unforgivably cut. For those who owned and loved the soundtrack album (I include myself), to look for but not find these fine tunes in the movie was most disappointing. The stage version of Carousel opened at the Majestic Theatre in New York in 1945 and ran for 890 performances. It is the least successful (performances-wise) of the ‘big five’ Rodgers & Hammerstein musicals – South Pacific, The King and I, The Sound of Music, Carousel and Oklahoma! Most critics believe (probably correctly) that the gloomy, downbeat ending did not sit well with movie-goers. People like happy endings.