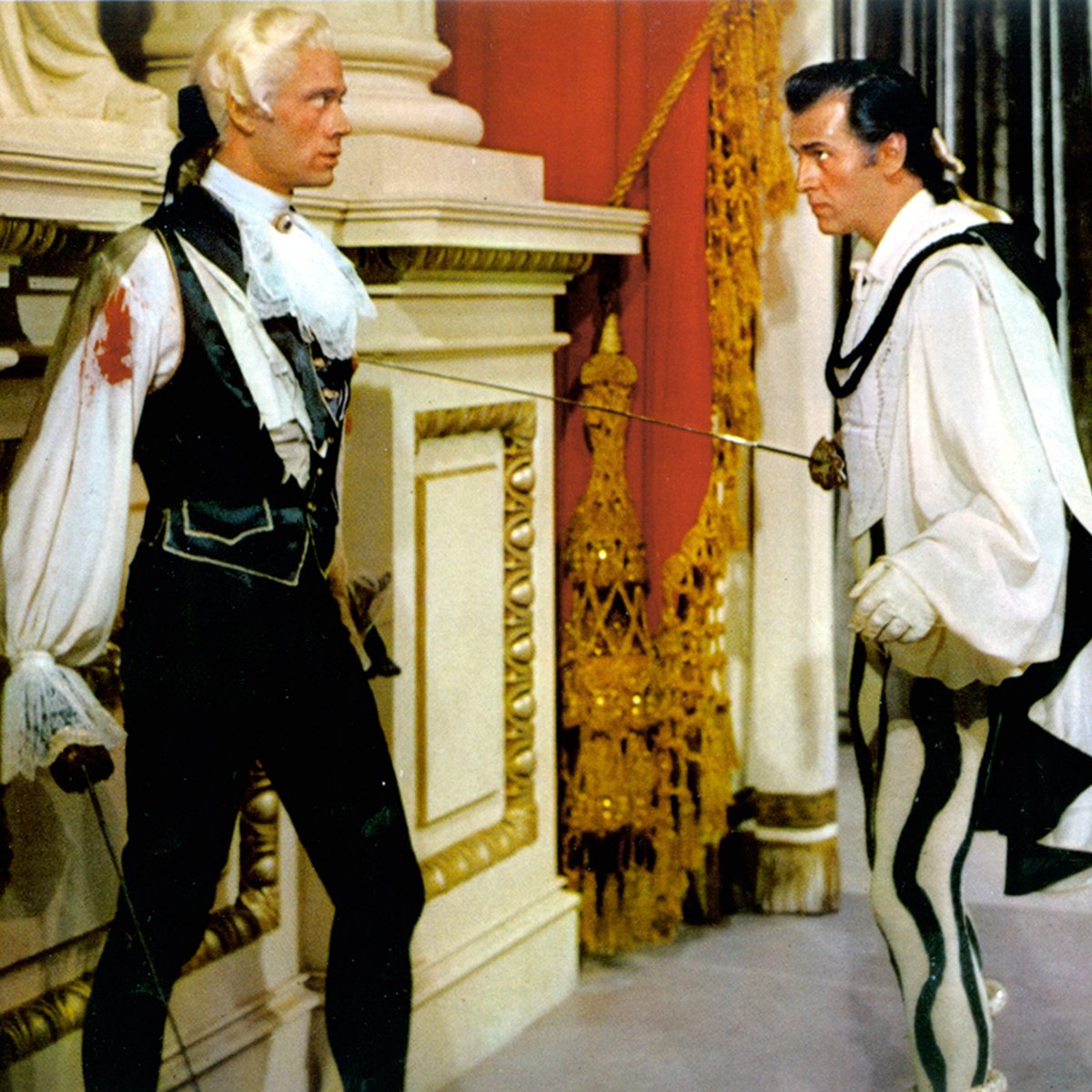 I was just five years old when MGM made the wonderful costumer Scaramouche (1952), and I first saw it with my parents about 6 or 7 years later. It was one of the reasons I fell in love with the cinema for it had everything – a great story, romance, humour, sword-fighting, marvellous costumes and two of the most beautiful women ever to grace a movie screen – Eleanor Parker and Janet Leigh. Even as a pre-teen I was capable of appreciating stunning feminine beauty of such rare quality. I thought the star of Scaramouche, Stewart Granger, was terrific, too. Little did I know how despised he was by cast and crew, but more of that later. 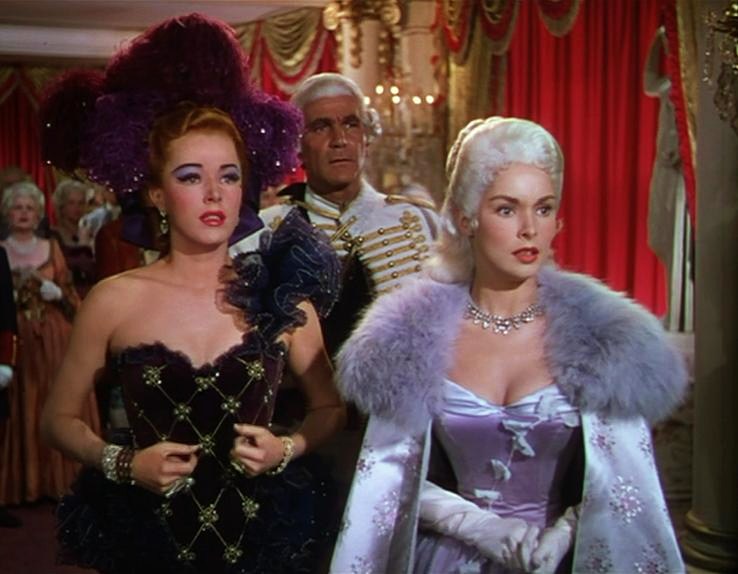 My mother started buying me the classic novels from the day I started school and Rafael Sabatini’s Scaramouche was one of the earliest books I read. I distinctly remember the order of the first six books (all hard covers in those days) that my mother bought for me. First came P.C. Wren’s Beau Geste; followed by Baroness Orczy’s The Scarlet Pimpernel; then Robert Louis Stevenson’s Kidnapped, James Fenimore Cooper’s The Last of the Mohicans was next, then Sabatini’s Scaramouche. Last, but not least, was Sir Walter Scott’s Ivanhoe. My mum sure knew a good yarn when she saw one. For reasons I shall not go into here, I did not see a lot of my parents while I was growing up, but I shall always be indebted to them for instilling in me a love of literature, the cinema and, for that matter, music. 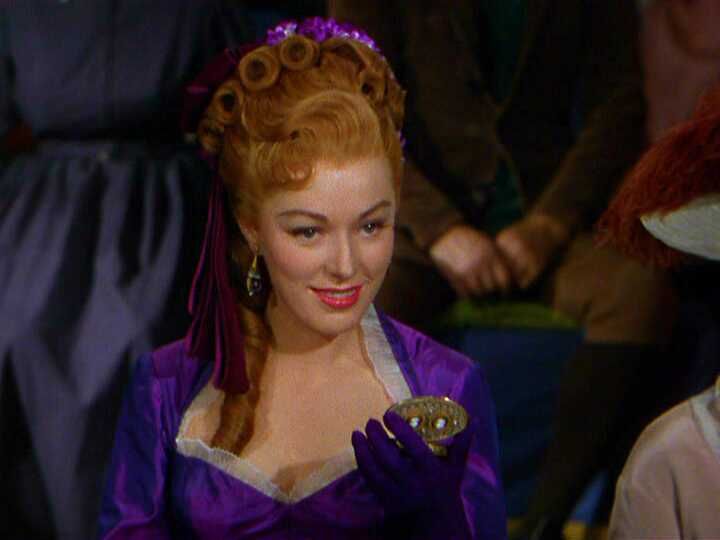 Even though I lived with my grandparents from the age of two until I married my first wife at twenty, I was enormously influenced by both mum and dad, albeit from a distance. Every week they made a point of purchasing the soundtrack of a Hollywood musical, so my brothers and sisters and I became intimately familiar with all the tracks from South Pacific, Oklahoma!, Carousel, Kiss Me Kate, My Fair Lady, Showboat, Singin’ in the Rain, Calamity Jane, Annie Get Your Gun, Seven Brides For Seven Brothers and Guys and Dolls, long before we reached high school age. Similarly, we knew the lyrics to every hit tune by Guy Mitchell, Frankie Laine, Perry Como, Jerry Vale, Rosemary Clooney, Doris Day, Harry Belafonte and a host of other pre-rock & roll recording artists. Being weaned on the above was part of my fortunate upbringing and I am grateful to have had parents who valued the finer things in life and passed those values on to us. 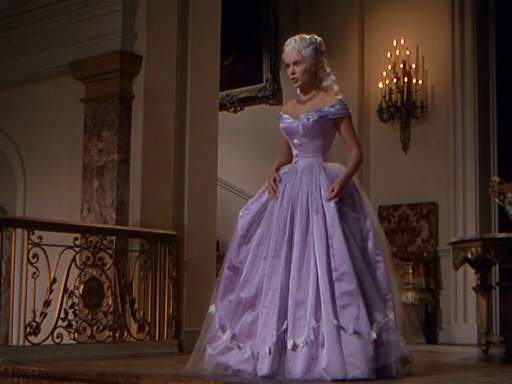 Rafael Sabatini, the author of Scaramouche, also penned rollicking sea-faring novels such as Captain Blood, The Sea Hawk and The Black Swan. All were made into movies with varying success. As far as Hollywood was concerned, Captain Blood first appeared in 1924, then in 1935, and later in 1952. The 1935 version made a star of Errol Flynn. The Sea Hawk was first shot in 1924 also, and then in 1940 with Errol again at the helm. The Black Swan arrived in 1942 with screen heart-throb Tyrone Power in the lead. Scaramouche first popped up in 1923, then in ’52 with Granger, and it is this version that I wish to look at here.

The first thing that struck me about the 1952 version of Scaramouche was that it was completely overlooked at the 1953 Oscars. Not a single nomination, and this in a year that saw the spud-ordinary DeMille circus flick The Greatest Show on Earth take home the Best Picture award! Scaramouche was superbly photographed, carried a classy screenplay and presented a score or more stunning costumes, not just for the leading ladies but for the men as well. Moulin Rouge won Best Costume in a Colour Movie that year. Scaramouche, an absolute treat in Technicolor, was not even nominated. DeMille’s opus, need I mention it, was nominated in that category. It is worthwhile watching Scaramouche simply for the pleasure of gazing on the superb array of costumes on display throughout. They are breath-taking.

Whenever I watch this film I am struck by the rapport between Eleanor Parker and Stewart Granger, in particular. In every scene they share, it is apparent they are having a great time of it and are clearly enjoying one another’s company. Wrong! Just the opposite. Eleanor stated categorically that Granger was the only person she failed to get along with in her entire career! ‘It wasn’t a conflict between the two of us’, she was quick to clarify. ‘Everyone disliked this man…Stewart Ganger was a dreadful person, rude…just awful. Just being in his presence was bad. I thought at one point the crew was going to kill him. Jean [Granger’s wife Jean Simmons] visited him on the set and would leave his dressing room in tears. He humiliated her. It was terrible.’ 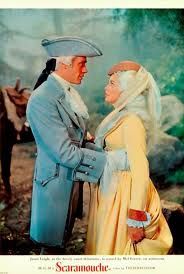 The censors, too, were up to their usual nit-picking tricks with this movie. Evidently, the relationship between Andre (Granger) and Lenore (Parker) bothered them enormously because there was every indication they may have been having a sexual relationship outside marriage. Heaven forbid! Andre’s love for Aline perplexed them even more because it actually implied incest, or so the censors felt anyway. The fact that Andre mistakenly thought Aline was his sister appears to have been lost on these guardians of public morals. He constantly fought against his love for her, but the very fact that he was attracted to a woman he thought was his sister, reeked of incest to the boys wielding the shears. Noel, Marquis de Maynes, (Mel Ferrer), challenged Andre to a duel in his own house in one scene, and part of the sequence required Granger to lie on the wooden floorboards as an iron chandelier dropped towards him, stopping just inches from his face. The director wanted to do the scene without a trial run, assuring the actor that the safety rope that halted the chandelier was sound, but Granger wasn’t having a bar of it. He wisely insisted they do a test run before he would condescend to lie under the heavy chandelier. Reluctantly, the director ordered the test run, the safety rope snapped, and the chandelier crashed through the floor of the set! The scene was reshot with Granger refusing point blank to lie under the re-rigged fixture. He would be rolling out of its way this time. Even so, he did not escape the picture entirely uninjured. During the final duelling scene at the theatre, he was required to jump from the back of a row of theatre chairs, but he slipped as he did so and severely injured his groin. Given Miss Parker’s comments regarding the actor’s lack of popularity with cast and crew, one wonders how many of them secretly savoured the moment! 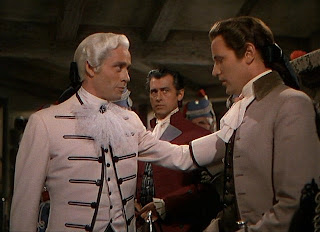 All these issues and Granger’s lack of popularity aside, he gives a wonderful performance, the best in his career in my opinion. Mel Ferrer is also excellent, as are both Eleanor and Janet, but the real winners are the costume designer Gile Steele and the cinematographer Charles Rosher. And the Academy rewarded their efforts with – absolutely nothing!