I suppose most fans of old movies have their personal favourite film noir. Mine is without doubt Double Indemnity (1944), which surprises even me because I have never been overly keen on any of the three stars – Barbara Stanwyck, Fred MacMurray and Edward G. Robinson. Not in other films anyway, but in this picture they combine perfectly to make Double Indemnity an exceptional piece of cinema. 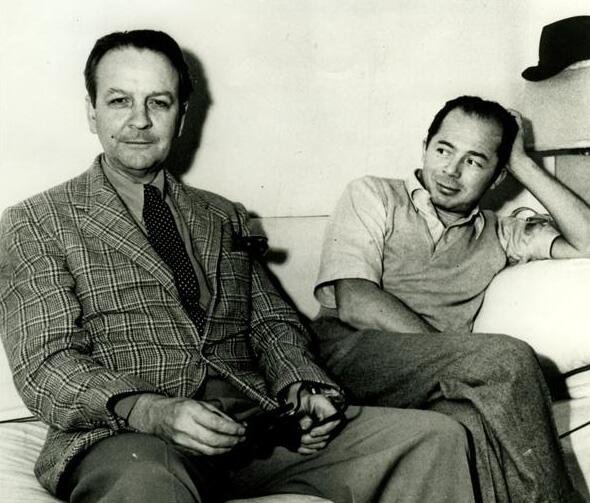 James M. Cain wrote the book on which the picture is based, yet the screenplay is by Billy Wilder and Raymond Chandler and it is superb, although throughout the entire writing process they detested each other. Cain himself said later that he would have loved to have been able to use some of their solutions to plot issues in his novel. Indeed, Wilder’s and Chandler’s dialogue was far better than Cain’s. By the way, Raymond appears in the film. At about the 16 minute mark he can be seen reading a magazine outside Keyes’ office as Neff walks past. He briefly glances up at Neff.

Many fans may not be aware that Cain’s story was based on the true story of Ruth Snyder, the subject of a notorious Roaring Twenties murder trial. The front page photograph of Snyder’s execution in the electric chair at Sing Sing has been described as the most famous news photograph of the 1920s.

By the time director Wilder realized that Stanwyck’s blonde wig was a bad idea it was too late. He had already shot several important scenes and was unwilling to ditch the thing and re-shoot them. In later interviews he endeavoured to rationalize his mistake by insisting that the wig was an intentional ploy on his part.  But he never said why. Stanwyck & MacMurray in a memorable scene

In my opinion it is inexcusable that this picture should be nominated for seven Oscars and win none. The very ordinary Going My Way swept the awards that year. Wilder was furious as award after award went to Leo McCarey’s sappy film. When Leo rose from his seat to accept the Best Director Oscar, Billy deliberately tripped him as he started down the aisle on his way to the podium! Double Indemnity was made during World War Two, of course, when food rationing was in full swing in the United States. During the shooting of the grocery store meetings between Phyllis (Stanwyck) and Walter (MacMurray), four policemen were stationed in the store to ensure that no-one from the cast or crew took food home.

If you think that MacMurray was a strange choice to play Walter Neff, if it is any consolation, he thought so too. It took a lot of persuasion from Wilder to convince him he was capable of playing a cold-blooded killer. Having been turned down by Alan Ladd, George Raft, Jimmy Cagney, Spencer Tracy, Brian Donlevy, Fredric March and Gregory Peck, Billy was fast running out of options. Raft would only agree to do it if, at the end of the picture, it was revealed that Neff was an undercover FBI agent sent to entrap Phyllis. Not a chance. Such a plot change ran contrary to Cain’s whole novel. Poor George. He was forever turning down offers to star in what later became cinema classics – Casablanca, The Maltese Falcon, Double Indemnity…

Edward G. Robinson did not intend playing the investigator Keyes because he was third character in the script. He changed his mind when he was offered the same money as the two leads, Stanwyck and MacMurray. Besides, he began to accept that his career was entering a transitional stage. Double Indemnity turned out to be one his greatest roles, and the scene in which he rattles off actuary tables on suicide was one of his finest screen moments.

How times have changed. Audiences in the forties were shocked when it appeared that John Garfield used his tongue in one of his kissing scenes with Lana Turner in The Postman Always Rings Twice. I have watched the picture many times and, to tell the truth, I have never noticed it. Then again, I wasn’t looking for it either. According to Warner Bros director Vincent Sherman, Lana was the only one of Garfield’s leading ladies to find her way into his bed. Personally, I doubt that very much. He possessed that ‘little boy lost’ appeal that a great many women find irresistible. Apparently, he and Lana enjoyed a tryst at a beach during filming, but their affair was a brief one. Both realized that their on-screen chemistry simply did not exist off-screen. Having sex was one thing – love was something else entirely.

When Garfield first arrived on the set he instantly propositioned his notorious co-star, calling out for all to hear. ‘Hey, Lana, how’s about a little quickie?’ She was not impressed. ‘You bastard’, was her response. But as shooting wore on they seemed to mellow towards each other until they ultimately embarked on their little fling. Perhaps, Garfield’s aggressive ‘Hello’ was in response to Lana’s well-known reaction on learning he was to be her leading man: ‘Couldn’t they at least hire someone attractive?’

The Breen Office held strong reservations about the picture. As expected, the censors objected to ‘numerous sexual irregularities’ in the story, as well as ‘the explicit treatment of criminal acts’. Almost laughably, there was an equal objection to ‘the emphasis upon the dishonesty of the lawyers and representatives of the insurance companies’. One wonders if anyone has since gone in to bat for the reputations of lawyers and insurance companies – the poor, misunderstood dears. Lana in white. Even her swimming costume is all white.

Director Tay Garnett seems to have deliberately dressed Lana in white throughout the film in order to deliberately provide a contrast with her decidedly black heart. And it works. The first time we see her, standing in the doorway in white pumps, she looks incredible. In fact, she is repeatedly in white until she becomes an accomplice to a murder. After that she appears in black. At the peak of her beauty there were not many (if any) who looked better. Incidentally, Alan Reed plays Ezra Liam Kennedy, the bogus court stenographer who types Cora’s confession. Fans of the TV animated series The Flintstones (1960-66) would surely recognize his dulcet tones. For several seasons he provided the highly distinctive voice for Fred Flintstone. 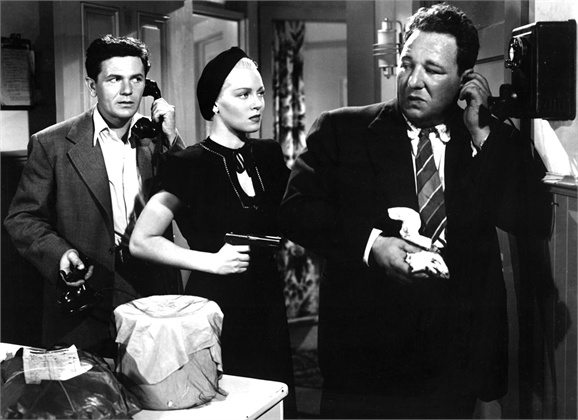 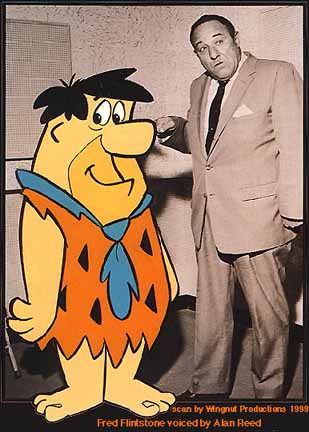 I enjoyed The Postman Always Rings Twice, but nowhere near as much as Cain’s other noir classic Double Indemnity (1944). The plot was far too similar to that of Double Indemnity which was made two years earlier. Also, whereas Barbara Stanwyck’s husband in the first film was a brusque and unappealing jerk whose death would be no great tragedy to most viewers, Cecil Kellaway in ‘Postman’ was a harmless little guy who probably deserved to die in his bed one day. Come to think of it, a stunning dish like Lana would be most unlikely to wed such a man even if he was filthy rich – which he wasn’t. ‘Postman’ is a pale imitation of Double Indemnity in my opinion.