One wonders how many young movie fans of today have any idea why the intersection of Orange Drive and Hollywood Boulevard, just across from Grauman’s Chinese Theatre, is now named ‘Carmen Miranda Square’. How many have even heard of her? Back in 1945 on ‘V-J Day’, at that very intersection, Carmen climbed atop a motor vehicle and did an impromptu victory dance for hundreds of jubilant Los Angelinos celebrating in the street. It was a wonderfully spontaneous moment that the Los Angeles authorities have deemed worthy of remembering. Good for them. ‘The Brazilian Bombshell’, as Carmen was called, was not even born in that country. She arrived in this world in Marco de Canaveses, Portugal in 1909, one year before her family moved to Rio de Janeiro. By the age of 30 she had become the biggest pop star in Brazil, so big that she was asked to appear on Broadway with the very hot comedy team Abbott & Costello in a show called ‘The Streets of Paris’. It was May 1939 and her frenetic dancing and undeniable stage presence combined to make her an instant hit, albeit with considerable help from New York columnist Walter Winchell. His daily show went out to 55 million listeners, so when he bugled that Carmen’s presence might very well save Broadway’s slumping ticket sales suffering from the impact of the New York World’s Fair, people listened. By 1945 she was one of the top five female money-earners in show business. 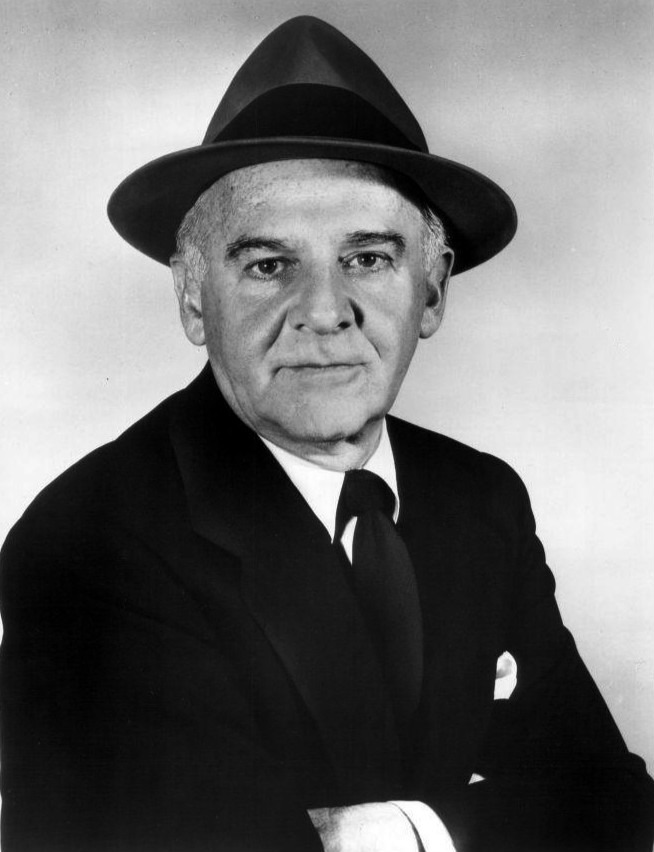 Fox signed her at once and threw her into the first of a number of ‘banana republic’ musicals, an offering titled Down Argentine Way. Not exactly Brazil – but close enough for your average Hollywood producer. America loved the movie and loved Carmen even more. Some wealthy Brazilians were less impressed. They felt she had become ‘Americanised’ and was denigrating Brazilian culture. Well, you can’t please everyone, I guess. Americans equated Carmen Miranda with the average Brazilian (tutti-frutti hat and all), but many of her aristocratic countrymen and women did not appreciate such a bizarre interpretation of their culture. Her triumphant return home in late 1940 met with a mixed reception which hurt her deeply.

In October that year she left for America again, vowing never to perform again in her homeland. The truth of the matter was simple enough. Upper-class Brazilians resented Carmen and her act because it was too ‘black’. Her costumes (including her headgear) were modelled on black Brazilian women she had seen in her formative years. Her opponents were merely voicing their racism. The everyday Brazilian was less critical. She was fun. 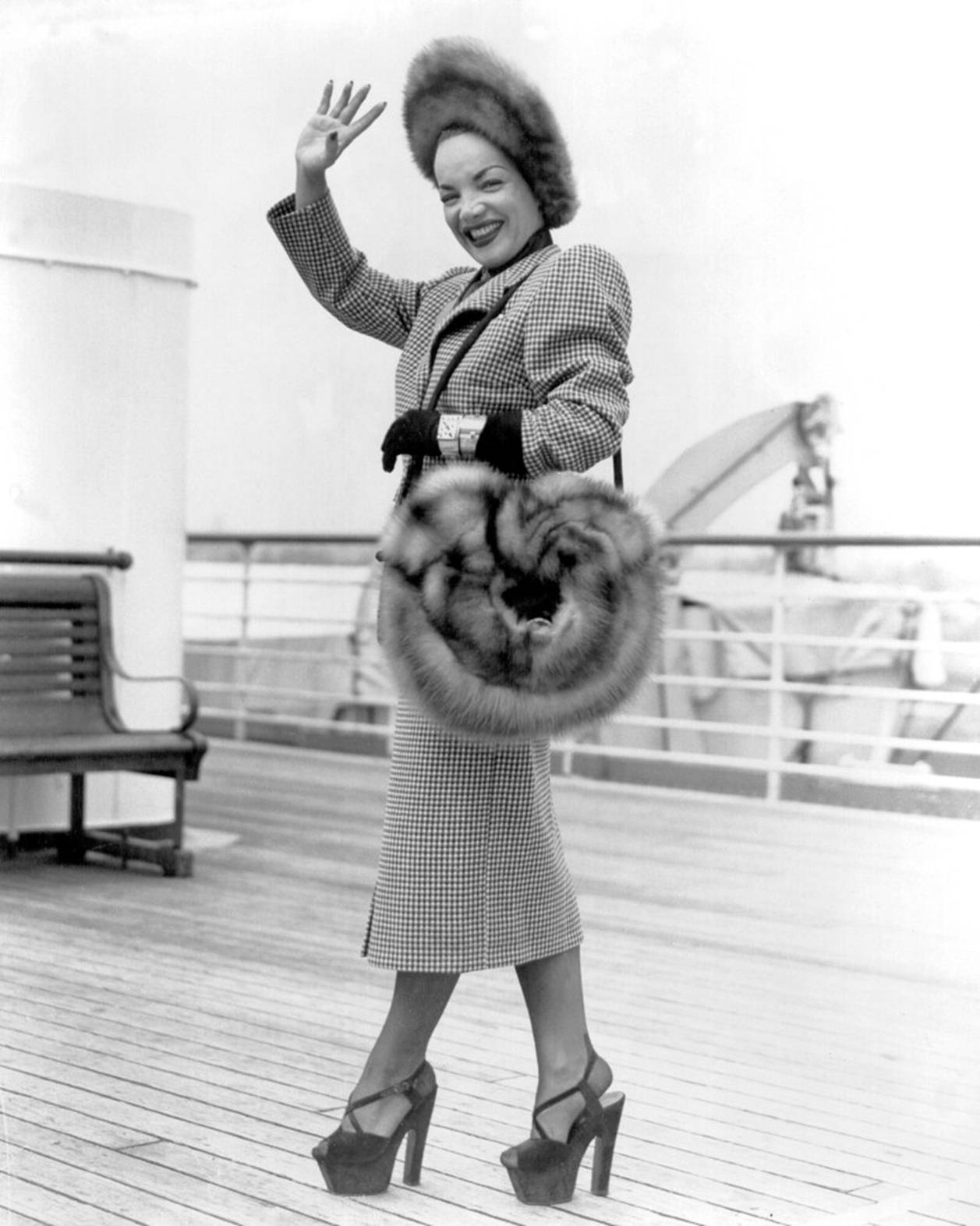 A unique personality, Carmen was never a great beauty. As middle-age loomed, she attempted to ward it off by undergoing a couple of plastic surgery operations on her nose. One of them was botched and continued to cause her pain for the rest of her short life. She soon added cocaine to the pharmaceutical painkillers prescribed for her. Tales abound of Carmen concealing her coke stash in a compartment in one of her trademark platform shoes. Candid snapshots surfaced of her twirling around on stage with Caesar Romero, minus her underwear. Was this to regain attention as her career began to wind down? Maybe so. Maybe not. I have reluctantly included a photograph of her dancing with Caesar Romero because there are still supporters of Carmen who insist that tales of her performing minus underwear are false. In 1947 she married producer David Sebastian, an abusive brute who treated her poorly. He was also an opportunist, said to have introduced his wife to uppers and downers to enable her to meet her exhausting work schedule. Her health suffered accordingly. The marriage only lasted a few months, but Carmen’s Catholicism would not let her divorce him. They were still officially man and wife at her death. Carmen’s private life was kept private, but she was known to have enjoyed relationships with several actors over the years. These included John Payne, Dana Andrews, John Wayne and Arturo de Cordova. In 1953 she made her final film, the Martin & Lewis comedy, Scared Stiff, after which she suffered a complete nervous breakdown and returned to Brazil to recuperate. In April 1955 she was ready to bounce back and headed again for the USA. Booked for a four-week stint in Las Vegas to be followed by another sizeable booking at the Tropicana Club in Havana, sadly, she would not fulfil either engagement. Sometime after midnight on 5 August 1955 she died from a heart attack, her body being discovered at 10.30am in the hallway. She was just 46. On hearing the news the Brazilian government declared a national day of mourning in her memory. Sixty thousand people attended the ceremony in Rio and it is estimated that over 500,000 escorted her cortege to its final resting place. 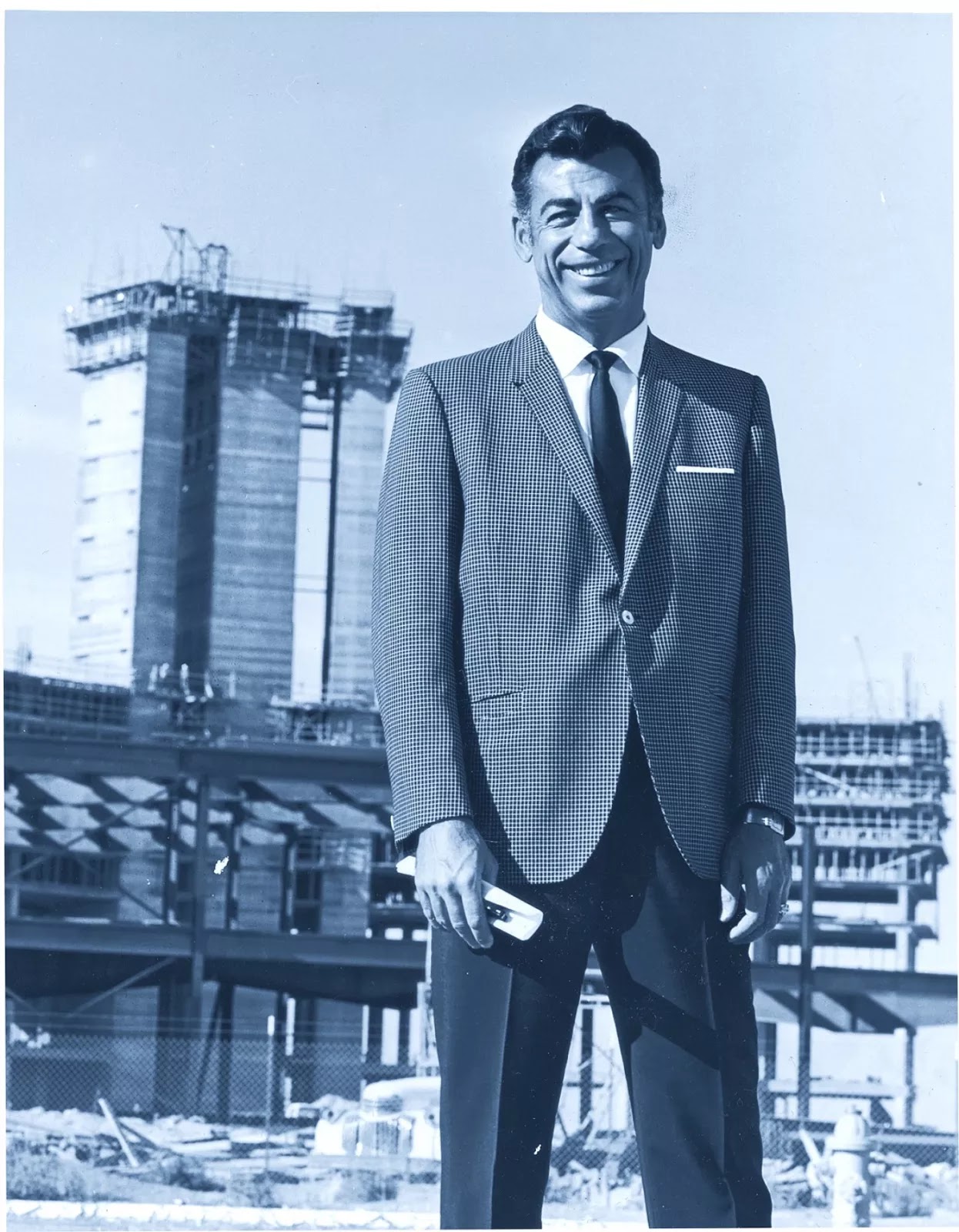 Corporate raider Kirk Kerkorian bought MGM in 1969 and proceeded to dismantle it and flog off its history. Debbie Reynolds borrowed $100,000 against her home and gallantly began buying up artefacts directly connected to important pictures and/or stars from MGM’s golden years. Her plan was to open a Hollywood Museum to display the pieces. Among her purchases were a chariot from Ben-Hur for $4,000, a clock from Ninotchka for $3,750, a dress worn by Lana Turner in The Bad & the Beautiful for $225, Fred Astaire’s Easter Parade hat for $250, Judy Garland’s blue and white checked dress worn in The Wizard of Oz for $1,000, the wizard’s suit ($650), the Cowardly Lion’s costume ($2,400), and one pair (there were probably 6 pairs in total) of ruby slippers, for which she paid $15,000. 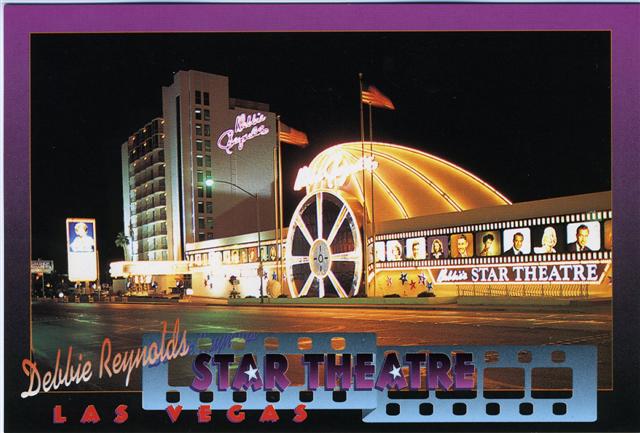 Kerkorian made $9.8 million selling off the studio’s priceless history in 1970. Debbie invested in a hotel/casino in Vegas that housed her movie memorabilia museum until she went broke in 1997. Several attempts since then to house her memorabilia in a Hollywood Museum have all fallen through, so in 2014, she was forced to auction off the wonderful collection she had accumulated since 1970. The auction was conducted in three stages and was expected to raise $5 -6 million. Instead, auctions one and two brought in $25 million! The sale prices for some of the items purchased at Debbie’s auctions make for some interesting reading: 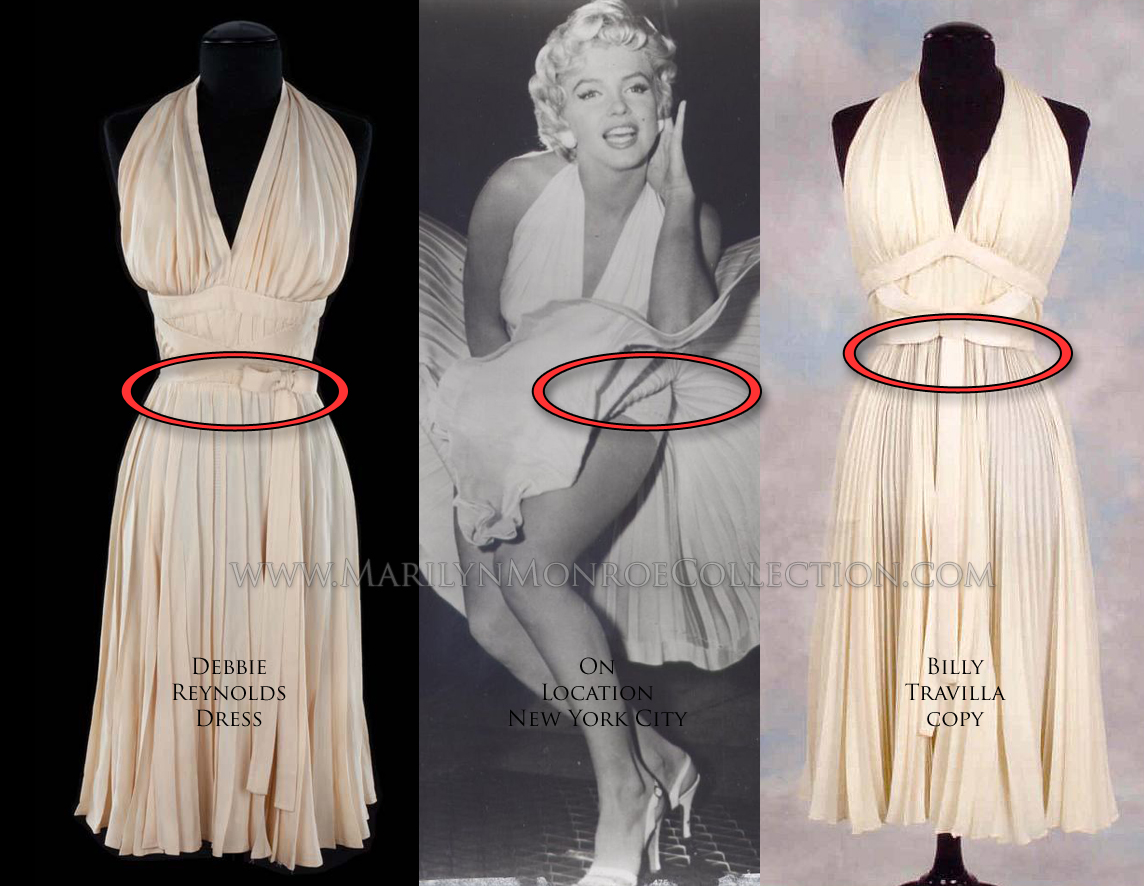 Marilyn Monroe’s ivory pleated ‘Subway’ dress from The Seven Year Itch (1955), arguably the most famous costume in movie history, fetched $5,658,000 US. There was, however, some question over its authenticity (see above). Audrey Hepburn’s stunning black and white Ascot dress, designed by Cecil Beaton, worn in My Fair Lady (1964) was purchased for $4,551,000 US. 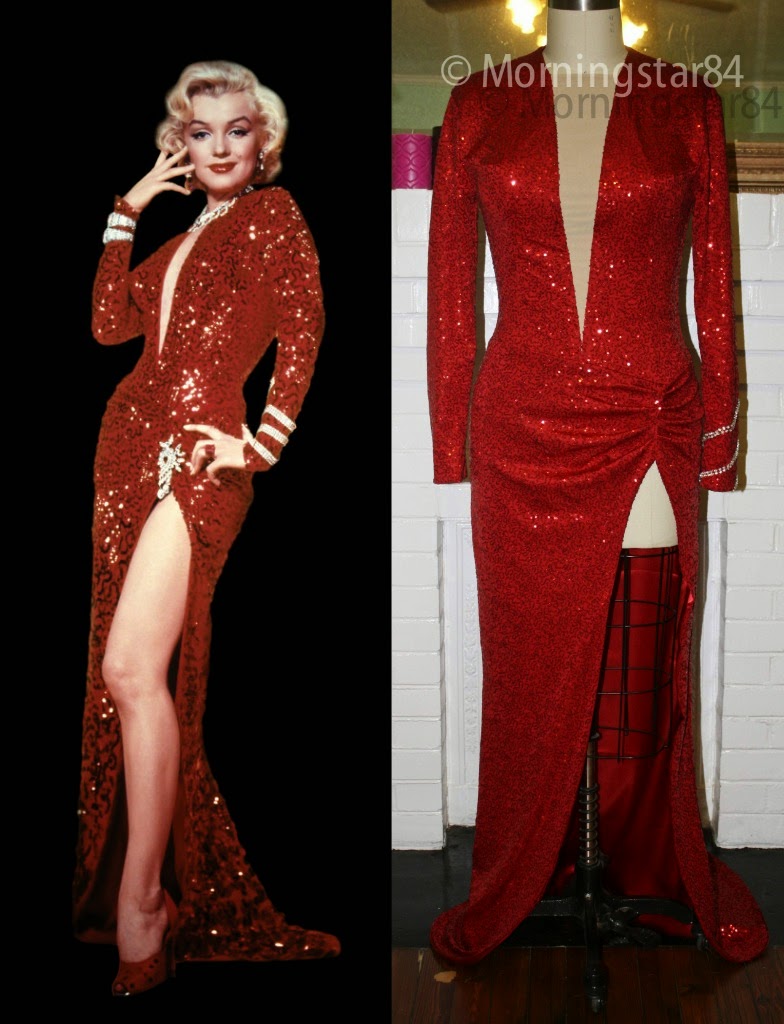 Marilyn Monroe’s red-sequined showgirl gown (with feathered hat) that she wore as Lorelei Lee when singing ‘Two Little Girls from Little Rock’ in Gentlemen Prefer Blondes (1953) – sold for $1,476,000 US. Charlie Chaplin’s signature bowler hat, worn in numerous productions by him as ‘the Little Tramp’, was sold to a collector for just $135,300 US. Elizabeth Taylor’s signature golden head-dress that she wore for her procession into Rome in Cleopatra (1963) sold for just $123,000 US. 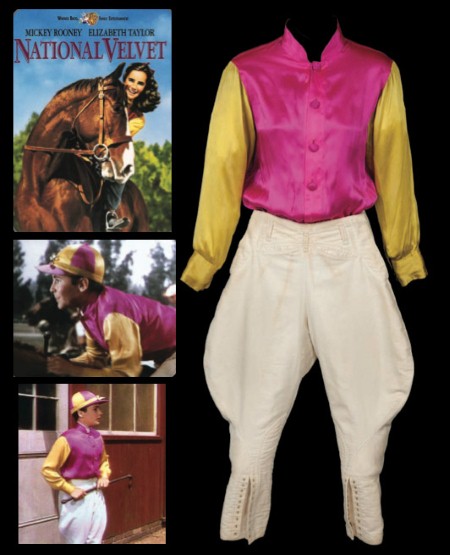 Liz Taylor’s racing silks that she wore as ‘Velvet Brown’ when she won the Grand National in National Velvet (1944) drew $73,800 US. The late Miss Reynolds had 3,500 costumes and 20,000 original photographs in her collection.