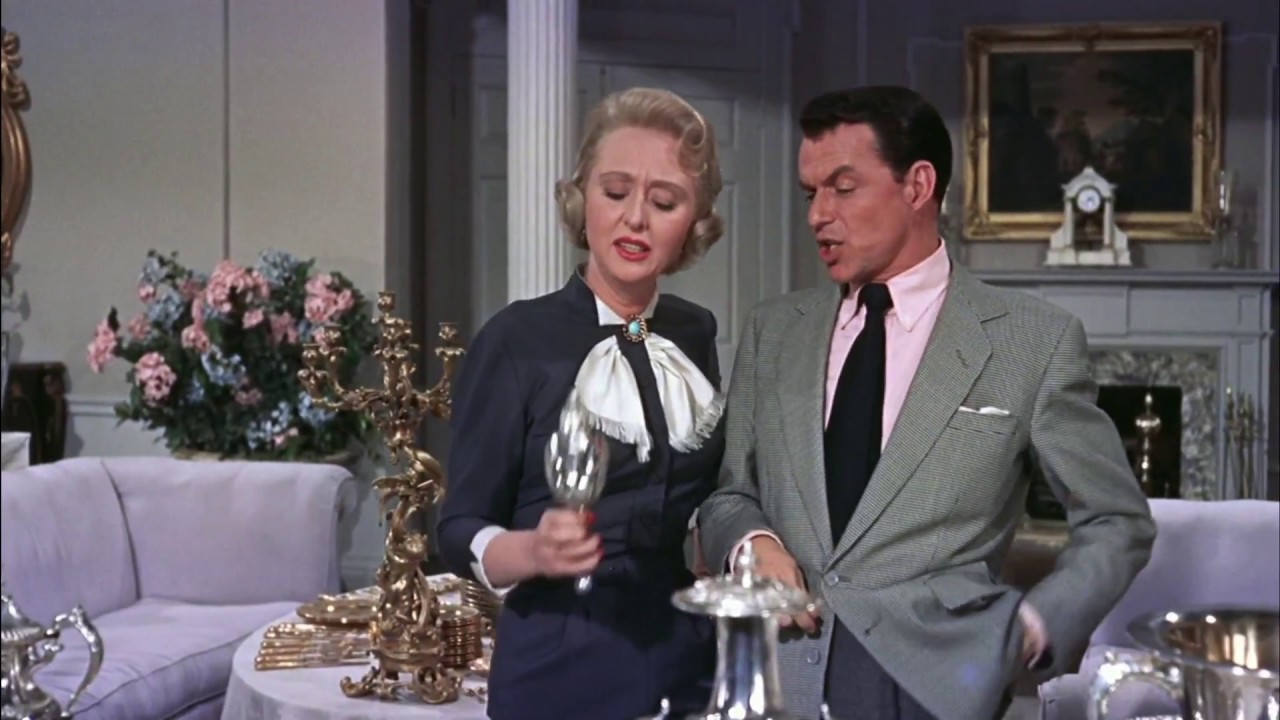 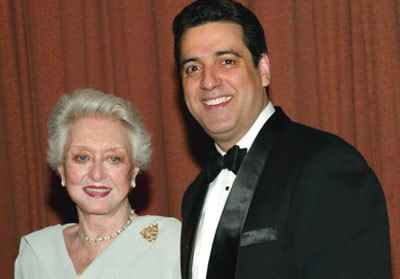 Although Celeste Holm appeared in some wonderful movies, even winning a Supporting Actress Oscar for Gentleman’s Agreement (1947), she much preferred stage work and returned there at every opportunity. Indeed, it was she who originated the role of boy-crazy Ado Annie in the Broadway production of ‘Oklahoma!’ in the 1940s. Her wise-cracking, smart girl image, evident in All about Eve (1950) and High Society (1956), was not, however, how she perceived herself. ‘I hated that’, she said. ‘It’s stereotyped. It’s not me.’ Personally, I think her duet with Frank Sinatra singing ‘Who wants to be a Millionaire?’ is one of the all-time entertaining performances in a Hollywood musical. In 2004, 87 year-old Celeste wed her fifth husband, 41 year-old opera singer/waiter Frank Basile. Following her death at 95 eight years later, a court battle erupted between Basile and her sons by a previous husband over her $10 million estate. The sons claimed that Frank had married her for her money after she was diagnosed with Alzheimer’s disease in 2002. A couple of years after Celeste’s demise, the magnificent Manhattan apartment in which she had resided for the last 50 years of her life was put on the market for around $14 million. Basile received one third of the selling price and her sons the rest. DIRK BOGARDE as Lieut. Scott-Padget in Damn the Defiant (1962)

One would have to go a long way to see two more polished performances than those of Dirk Bogarde and Alec Guinness in Damn the Defiant (1962). The picture was titled H.M.S. Defiant in the UK but the producers worried that American audiences might be confused by the ‘H.M.S.’ portion of the title, so Damn the Defiant it became in the USA. Against type, Bogarde is superb as the ambitious and sadistic, second-in-command of H.M.S. Defiant, Lieutenant Scott-Padget. Guinness is equally impressive as the ship’s Captain Crawford. Anthony Quayle delivers the third fine performance as Vizard the mutiny leader. Set in 1797, this is a brilliant movie about the British Navy in the days of wooden ships and iron men. Bogarde held strong views about the industry in which he worked, once telling an interviewer, ‘I love the camera and it loves me, but the cinema is just a form of masturbation. Sexual relief for disappointed people.’ A gay man all his life, he disdainfully spoke of letters he regularly received from female fans. ‘Women write and say, ‘I let my husband do it because I think it’s you lying on top of me.’ Illuminating.

Lt. Scott-Padget: ‘You may have the power of life and death over every man about this ship, sir, but I warn you: if we come through this voyage safely, to have followed Admiralty instructions may not be quite enough.’

Louise Fletcher was in preparation for a role in Nashville at the same time that Lily Tomlin was preparing to play Nurse Ratched in One Flew over the Cuckoo’s Nest. The two actresses would ultimately switch roles, thus enabling Louise to deliver one of the cinema’s most memorable performances. Her cold, unsympathetic turn as Nurse Ratched would deservedly win for her a Best Actress Oscar. The part was one of the most hotly contested roles of the day, one that top actresses throughout Hollywood sought vigorously. The cold and heartless role she became totally immersed in began to get to Louise as the weeks rolled by. Everyone else could step out of character in the breaks but she was not willing to do that. Near the end of production she astonished her workmates by suddenly removing her dress and standing before them in her panties, just to prove to the cast members she was not ‘a cold-hearted monster’! At the Academy Awards she did something unprecedented when she completed the final part of her acceptance speech in sign language; an acknowledgement to her parents who were both deaf. ‘I want to thank you for teaching me to have a dream’, she signed to them. ‘You are seeing my dream come true.’

Nurse Ratched: ‘If Mr. McMurphy doesn’t want to take his medication orally, I’m sure that we can arrange that he can have it some other way. But I don’t think that he would like it.’ MATTHEW BRODERICK as Ferris in Ferris Bueller’s Day Off (1986) 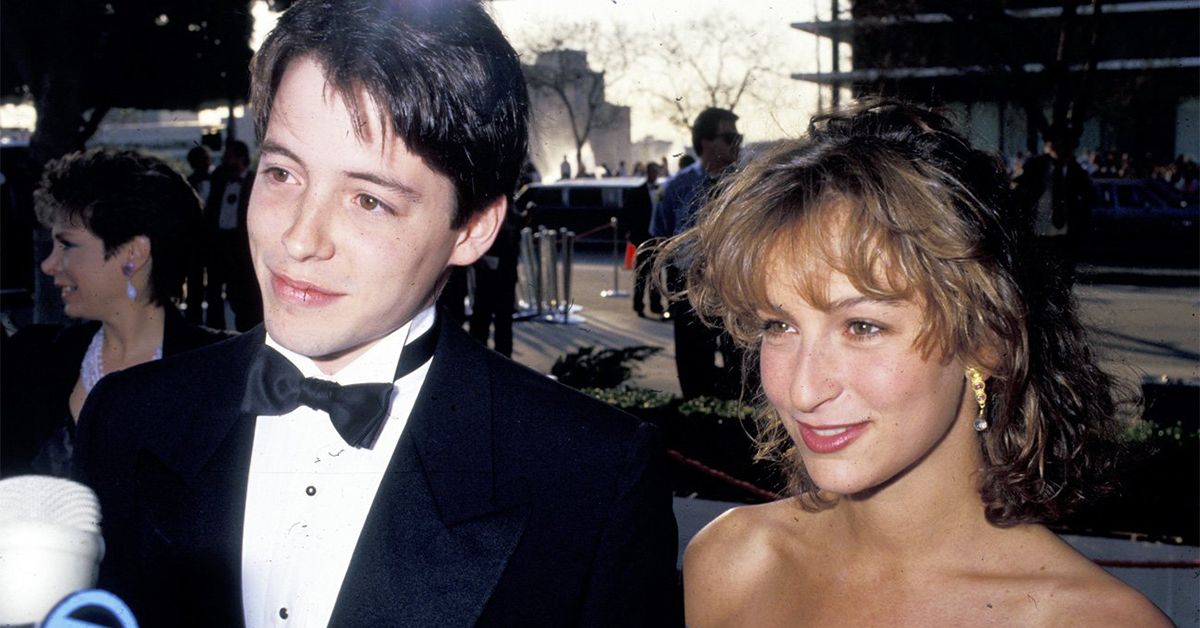 Matthew Broderick was 23 years old when he played the title role in Ferris Bueller’s Day Off (1986). Furthermore, Alan Ruck who played his pal Cameron, was actually twenty-nine! The two actors had worked together on Broadway in Biloxi Blues and were already close friends. Matthew and Jennifer Grey played siblings in the movie while off-screen they were romantically involved and would, in fact, become engaged to be married after the picture was completed. The marriage never eventuated, however. At one point in the film Ferris was scripted to say, ‘Come next year, I’ll be the first kid to ride on the Space Shuttle.’ The line even featured in the previews released to theatres but, five months prior to the picture’s release, the Challenger Space Shuttle exploded after take-off, killing all on board. Director John Hughes immediately recalled the previews and had the line removed from them.

Ferris: ‘Pardon my French, but Cameron is so tight that if you stuck a lump of coal up his ass, in two weeks you’d have a diamond.’ 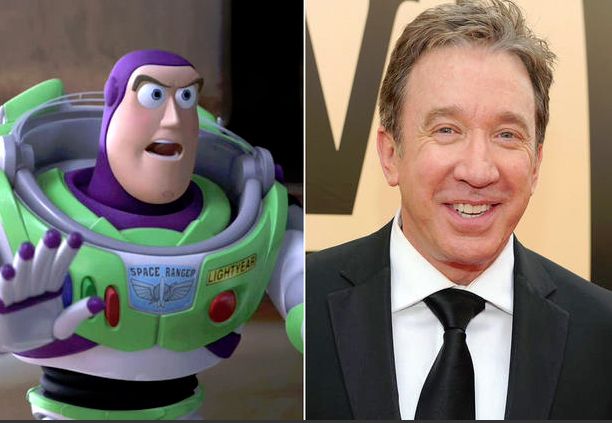 Toy Story appeals to adults as much as to children, and much of the credit for that goes to Tim Allen’s hilarious performance as the voice of Buzz Lightyear, the spaceman toy who believes he is a real person. If Jim Carrey, Chevy Chase and Billy Crystal had not turned down the job he would never have gotten it and the Toy Story franchise would have been so much poorer. The name Buzz Lightyear was inspired by ‘Buzz’ Aldrin, the second man to walk on the moon after Neil Armstrong. The character was originally going to be named Lunar Larry but wiser heads prevailed. Allen became a household name around the world following the huge success of his prime time TV series Home Improvement (1991-99), but it has not always been plain sailing. In 1978 he was sent to prison for 28 months for attempted drug-dealing and it would be almost a decade before he even started his climb to stardom on television and the movies. For one week, in November 1994, he had the top rated television series (Home Improvement), the top movie (The Santa Clause) and had written the book that was atop the best sellers list (Don’t Stand Too Close to a Naked Man). Quite an achievement

Buzz Lightyear: ‘How dare you open a spaceman’s helmet on an uncharted planet! My eyeballs could’ve been sucked from their sockets!’