Part two of this article looks at the 25 television westerns from the 1949-69 era that were the most successful, according to the number of episodes in each. There may be a few surprises, although number one will come as no surprise at all to anyone who remembers the era and the genre.

Kit and his pal El Toro travel the west righting wrong. The series has nothing whatsoever to do with the life of the real Kit Carson. His name is used, nothing more.

This series is half western and half science fiction and features two agents of President Ulysses Simpson Grant, James West and Artemus Gordon, who travel through the west in a splendidly appointed train full of a series of interesting gadgets. The real Bat Masterson was an acquaintance of Wyatt Earp and really did wear a derby hat. He probably carried a cane too. He was a lawman and gambler who roamed the west bringing criminals to justice with just the use of his wits and his cane (if you care to believe this series that is.) I don’t. Gene Barry is ideally cast, however.

The success of this series was almost entirely due to its charismatic, quiet-spoken star Clint Walker. At 6’6” (1.98m) he towered above most other television stars, was barrel-chested and a huge hit with female fans. Someone from Warner Bros saw him playing a Captain of the Guard in DeMille’s The Ten Commandments (1956) and bought out his contract before casting him as Cheyenne Bodie. Walker passed away in May 2018 at the age of 90.

Stanwyck portrays Victoria Barkley, the matriarch of the Barkley family who reside at their ranch in California’s San Joaquin Valley. Despite its popularity the series was cancelled in 1969 because the network decided to phase out westerns in favour of more modern shows. 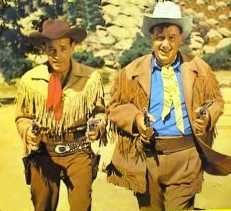 Madison plays the legendary western character and Devine is his sidekick Jingles. Needless to say, the real Hickock never had a partner named Jingles or anything else.

This series about a boy (Diamond) and his love for his horse (Fury) was well made and extremely popular. Peter Graves, the real life brother of James Arness of Gunsmoke fame, plays the boy’s father.

I was 10 years old when Maverick began and I loved every minute of it, especially when it featured Brett Maverick (James Garner). Jack Kelly played his brother Bart and in later seasons their English cousin Beau was portrayed by Roger Moore. 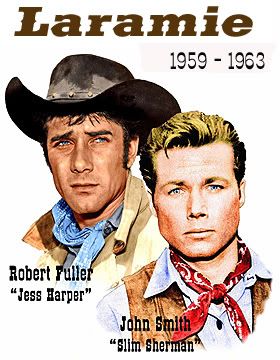 Slim Sherman and his 14 year-old brother work to hang onto the family ranch by running a few cattle and providing a stagecoach station on the property which is just outside Laramie. This series was extraordinarily popular in Japan. When its star Robert Fuller visited Tokyo he was greeted by 100,000 fans at Haneda airport, more than would greet the Beatles in 1966!

Powell was not only the host of this anthology of Zane Grey tales, he also played the lead role in many of them. 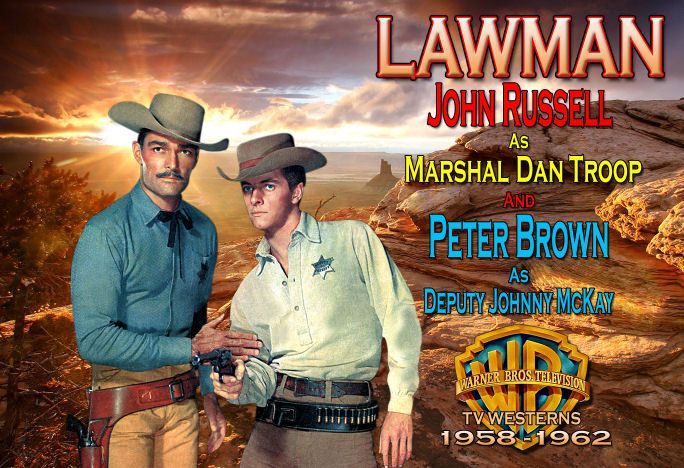 Russell is Marshal Dan Troop of Laramie, Wyoming and Peter Brown is his Deputy Johnny McKay. Peggie Castle joined the cast in season two when her character Lily Merrill opened the Birdcage Saloon. 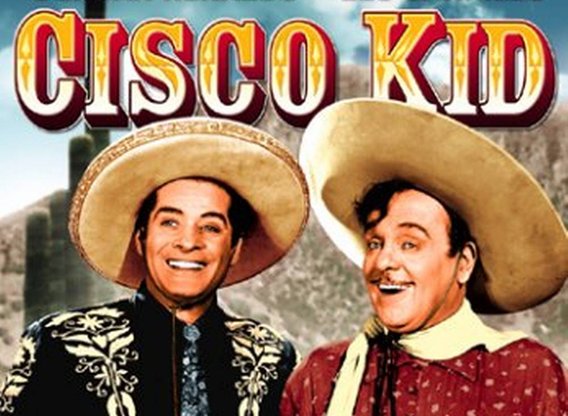 This was one of the very first series to appear on TV in my home state of Western Australia when television arrived in the late fifties. Renaldo was Cisco and Leo was his English-mangling sidekick Pancho. The acting was terrible, so was the script and so were the storylines.

Chuck Connors, Johnny Crawford & Paul Fix
Connors portrays Lucas McCain, a widower with a son (Johnny Crawford) who is an expert with a customized rapid-fire Winchester rifle, incidentally, the very same one wielded by John Wayne in Stagecoach (1939). 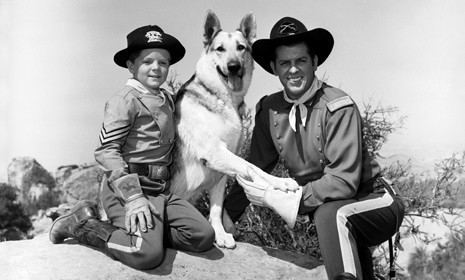 Rusty (Lee Aakers) was orphaned in an Indian raid, so he and his dog (Rinny) were adopted by the cavalry force at Fort Apache, Arizona. The series was shot on the set of John Ford’s 1948 classic Fort Apache. James Brown plays Lt. Rip Masters.

After his success playing Davy Crockett for Disney, there was never going to be anyone other than Fess Parker portraying Daniel Boone in this fine series. Ed Ames, one of the terrific singing Ames Bros, became most recognizable as Boone’s Indian pal Mingo. Patricia Blair was Daniel’s wife Rebecca. 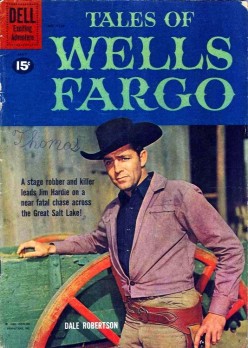 Robertson plays Jim Hardie, a Wells Fargo agent who investigates crime against the stage line. Interestingly, Robertson, a natural right-hander, taught himself to draw and shoot left-handed so that Hardie would have a more distinctive look. The locomotive he rides on is the same one used in the Casey Jones series. Rawhide is about a cattle drive that goes on and on and on…The trail boss is Gil Favor (Eric Fleming), his off-sider is Rowdy Yates (Eastwood) and the cook is Wishbone (Brinegar). Fleming left the series in season eight when he had a disagreement with the producers. The show was plummeting in the ratings anyway. Eastwood took over as trail boss but 13 episodes later the series was cancelled. In 1966 Fleming was drowned in a Peruvian river while shooting a scene for a movie. He was to be married in two days’ time. Curiously, Moore (The Lone Ranger himself) sat out 52 episodes and was replaced in them by John Hart, but viewers were unhappy about the situation and Clayton was later reinstated. He claimed the dispute was over ‘creative differences’. The studio claimed he wanted more money. Consequently, Jay Silverheels as Tonto was present in a lot more episodes than Moore. Only season five was in colour, by the way. And if you have ever wondered (as I have) why the Lone Ranger never seemed to earn his livelihood, the answer is simple enough. He lived off his silver mine (hence his endless supply of silver bullets). 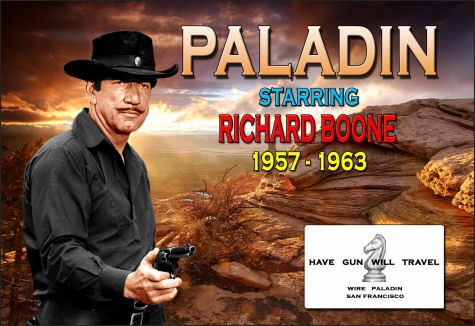 Paladin (Boone) is a West Point graduate who operates as a gun for hire out of San Francisco’s Hotel Carlton. His calling card reads: ‘Have Gun, Will Travel. Wire Paladin, San Francisco.’ Twenty-four episodes were written by Gene Rodenberry, the future creator of Star Trek (1966). O’Brian portrays the legendary Marshal Earp as he brings law and order to Kansas and Arizona. Just how many of these episodes are based on fact is debatable. Not many, would be my guess. George Montgomery was first offered the role but was unable to accept it.

The action mostly happens on or around the Shiloh Ranch in Wyoming Territory. Drury plays the title role and McClure his friend Trampas. The Virginian was especially unusual in that each episode ran for 90 minutes instead of the more common 30 or 60. Even so, the series lasted almost a decade, testament to the quality of the screenplays and the acting.

Ah, the famous wagon train that took eight years to get to California and still had not arrived there when the series was cancelled! Ward Bond was the original wagon master Seth Adams until a heart attack claimed him in 1960. John McIntire took over until 1965. Robert Horton played the first scout Flint McCullough. Oddly enough, the two actors who appeared in the most episodes were Frank McGrath (271 episodes as Charlie Wooster) and Terry Wilson (267 episodes as Bill Hawks).

The Ponderosa Ranch was a thousand square mile spread outside Virginia City where Ben Cartwright and his three sons, Joseph (Little Joe), Eric (Hoss) and Adam lived. Like most western series the only women to appear were the occasional guest stars. Permanent female cast members were rare in the fifties and sixties. I must admit I never liked Bonanza. The sons forever acted like little boys in the presence of their father even though they were grown men. Annoying. 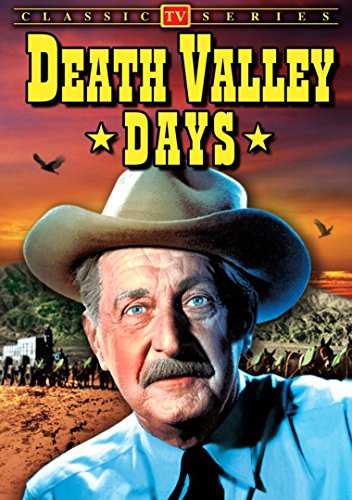 This series never made it to Western Australia, but it was clearly most successful in America because it ran there for almost twenty years! Andrews was ‘the old Ranger’; Taylor, Reagan and Robertson hosted the programme. The long-running series started out as a radio show back in the 1930s. Marshal Matt Dillon of Dodge City graced TV screens all around the world for two whole decades. Perhaps, it was Arness who gave the characterization something extra. Maybe, it was the presence of a regular female cast member (Amanda Blake as Kitty) that gave the series a fairer sex following. Or was it the likeable Dennis Weaver as Chester or Ken Curtis as Festus, the Marshal’s Deputies? Whatever the reason, Gunsmoke out-distanced all the other western shows by a country mile, almost two hundred more episodes than its nearest rival. A quite astonishing achievement.