Obviously, most of us are drawn to a movie more often than not because of the lead players, yet very few great movies are carried entirely by their stars. The support players can make a profound difference to the quality of a picture. A prime example of this (and there are many) would be the very funny My Cousin Vinny (1992). This film has two hilarious performances from its leads, Joe Pesci and Marisa Tomei, but it is also impregnated with a string of great character performances. I refer to Fred Gwynne as the judge, Austin Pendleton as the stuttering defence counsel, Maury Chaykin as a near-moronic witness for the prosecution, Lane Smith as the prosecutor, plus James Rebhorn, Bruce McGill and Chris Ellis. Together, these talented individuals turn what could have been dull, plot-building moments into sheer entertainment. Result – an exceptionally funny movie.

Austin Pendleton in My Cousin Vinny 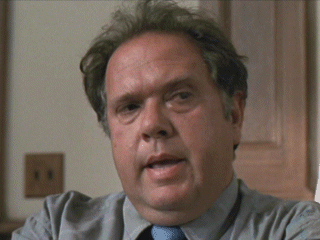 As you can gather, I am a big fan of accomplished character actors, because in 99 out of 100 films they are an integral component that often makes the difference between a hit and a miss. Having said that, I can practically guarantee that lovers of Who’s Afraid of Virginia Woolf? (1966) will be saying that, for all intents and purposes, there were virtually no supporting players, just the four principals, Liz Taylor, Dick Burton, George Segal and Sandy Dennis. True enough. But was that a great movie?

Liz & Dick duking it out

I suppose, if you want to sit back and watch a few drunks have a 2 hours and 11 minute ‘domestic’, and are content to call that entertainment well, you are certainly much easier to please than me. Come to think of it, it must be a great movie because it copped 13 Oscar nominations – thirteen of them – and picked up five! Why Burton and Taylor should be nominated for convincingly playing a drunken, cat-fighting married couple is beyond me. That is what they did almost every night and day of both their marriages. You might just as well give Tom Jones an Oscar for convincingly portraying a pop singer in Mars Attacks! Come to think of it, why didn’t Lassie win a stack of Oscars? He (Lassie was, in fact, a boy dog) was the most convincing dog I have ever seen on the screen, and he sure looked like a girl dog to me. No justice.

Anyway, I thought I might write a little about some of the movies’ best character actors over the next couple of weeks. And there are plenty to pick from. Here are the first two – one male and one female. Bette Davis and Thelma Ritter in All About Eve (1950)

Of all the wonderful supporting players in movies down the years Thelma Ritter’s record is in a place of its own. She only made 31 movies in her 21 year career before dying from a heart attack at 67, yet she was nominated six times for a Best Supporting Oscar. It is one of Hollywood’s great dis-services that her peers never gave her enough votes to win one. I always thought she was, because of her seemingly effortless performances, the supporting player’s equivalent of a female Spencer Tracy. Like him she never appeared to be acting. Perhaps, that was why she never won. Whatever Cary Grant did on screen appeared ‘effortless’ also, and he did not win an Oscar either. In fact, he was only nominated twice in his long career. Of course, he was almost never a supporting player, always the star or one of them.

Thelma’s success was certainly no fluke. By the time she hit the big screen she had experienced a very solid grounding in school plays, in stock companies, and lengthy training at the American Academy of Dramatic Arts. She was enjoying a successful stage career when she decided to take a hiatus from acting to raise her two children. Indeed, she did not make her first movie until she was 45 years old, but her impact was immediate. Between 1947 and 1949 she appeared in Miracle on 34th Street, Call Northside 777 and A Letter to Three Wives (all of them uncredited roles), yet just five movies later she earned her first Oscar nomination for All About Eve in 1950. Others would follow for The Mating Season (1951), With a Song in My Heart (1952), Pickup on South Street (1953), Pillow Talk (1959) and Birdman of Alcatraz (1962).

with Richard Widmark in the excellent Pick-up on

Throughout her rather brief career Thelma never bothered to disguise her strong New York accent in any of her roles. Her characters were always working class, world-weary and wise women who could spot a phony a mile off. Once again, it is possible that her peers felt she was too much the same in her pictures, too predictable, but the movies she graced were better for her presence. Quite often, she outshone the stars themselves. She remained married to the same man for 42 years until her death, a unique kind of actress. I doubt we will see her like again.

Indiana-born Strother Martin contributed so many terrific characters to so many movies it is difficult to single out any one in particular. Most fans would probably choose his Captain of Road Prison 36 in the 1967 Paul Newman film Cool Hand Luke, and more than likely because of his now famous utterance: ‘What we’ve got here is…failure to communicate.’

In the mid-fifties he had more work than he could handle either in movies or TV (8 roles in 1954, 10 in 1955, 8 in 1956, 10 more in 1957), and that’s not counting regular parts in series such as Lassie and Hotel de Paree. The demand for his peculiar talents remained steady throughout the sixties and seventies, right up until the day he died in 1980.

Diminutive Strother (he was just 5’7”) became the National Junior Springboard Diving Champion of the United States at the age of 17 and became a swimming instructor in the US Navy five years later when WW2 drew the USA into it. After the war his 3rd place finish in the adult National Springboard Diving Championships cost him a spot on the US Olympic team for London and the 1948 games. 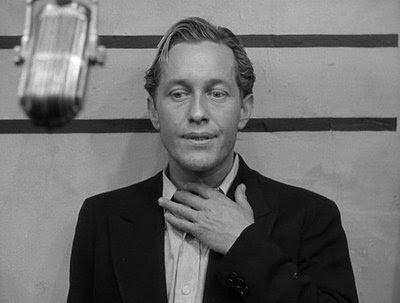 Strother at the start of his career

It was then that he moved to California, ostensibly to be an actor, and picked up odd jobs teaching actress Marion Davies to swim, and later (no doubt due to her ‘friendship’ with Charlie Chaplin) he made excellent money teaching ‘The Little Tramp’s’ kids to do likewise. Before long he was scoring swimming extra roles in a few movies, commenced a life-long friendship with director Sam Peckinpah, made movies and TV for him, and came to the attention of director John Ford. By 1967 and Cool Hand Luke Strother had few peers in the character actors’ guild.

with good friend LQ Jones in The Wild Bunch (1969)

Martin frequently co-starred with L Q Jones and the two became close friends. He also appeared in six John Wayne westerns and in three movies featuring Paul Newman. His brief appearance as the mine manager/payroll collector in Butch Cassidy & the Sundance Kid (1969) is one of my personal favourites. The demise of the studio system affected all character actors, even the ‘biggies’ like Strother. ‘There was a time when people like me would have been approached, at least, to be under contract to the studio and farmed out picture by picture’, he reminisced just months before his death. ‘It’s true that a man like myself does not know after this movie – this may be the last movie I ever do in my life. I have no assurance.’ Diagnosed with cardiac problems, Strother ultimately succumbed to a heart attack at 61. His wife of 13 years was actually ten years his senior, yet would outlive him by another 17 years.