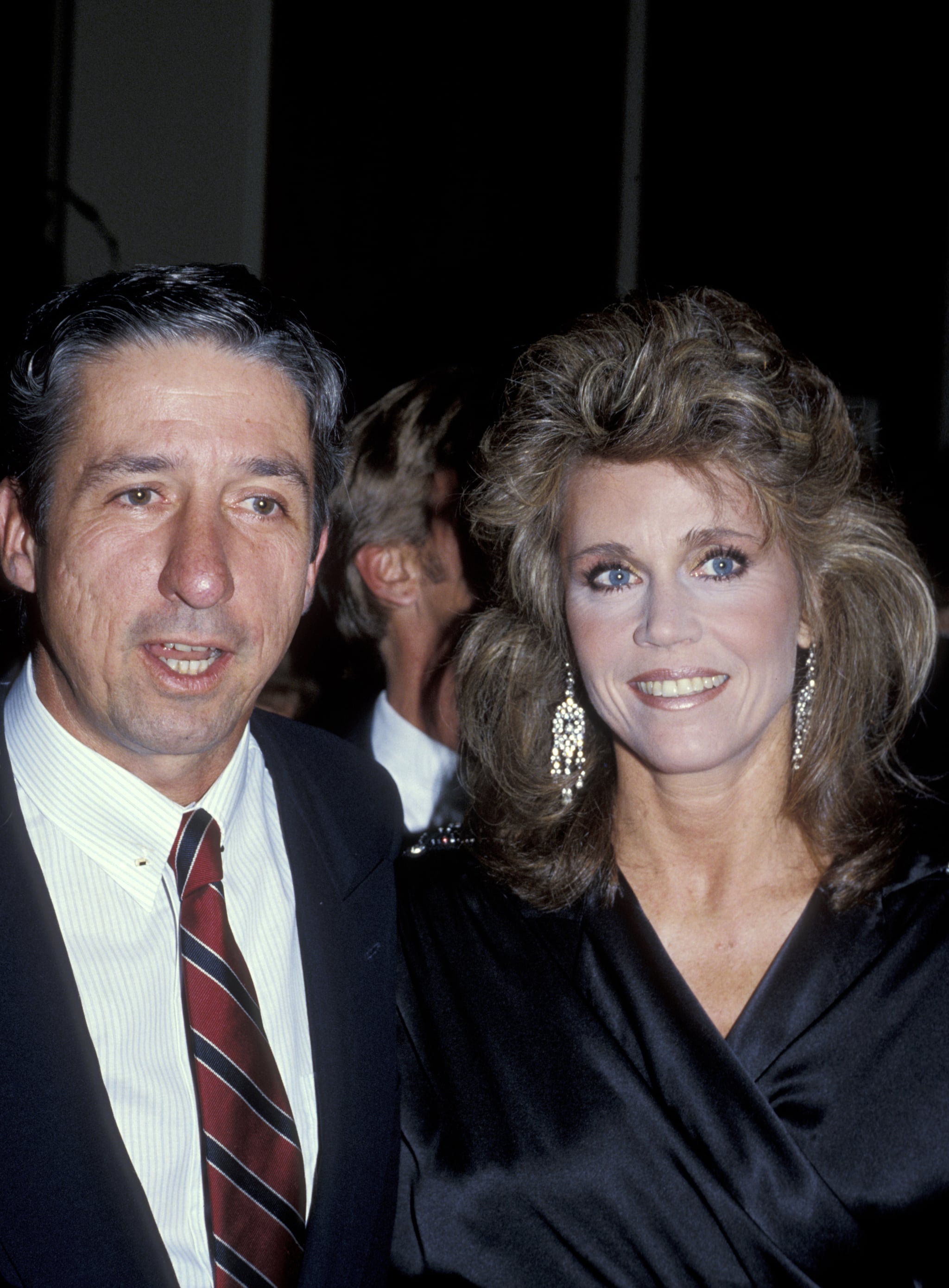 This dramatization examines the real life trial of eight men following the arrest of seven leading protestors involved in the violent confrontations between activists and Chicago police at the Democratic Party Convention in that city in 1968. The activists came from two factions; the moderate Students for a Democratic Society (led by Tom Hayden) and the more militant Youth International Party, dubbed ‘Yippies’ by the media, (led by Abbie Hoffman and Jerry Rubin). In addition to the seven activist defendants, another man, Bobby Seale of the Black Panthers, was also charged despite having nothing to do with the confrontations at all. Over the course of five days and nights the protestors marched against the US prosecution of the Vietnam War. Police made numerous arrests and used tear gas, mace and batons on the marchers. Hundreds of marchers and police (plus dozens of journalists) were injured. Journalists’ cameras were smashed and film confiscated.

The highly credentialed Aaron Sorkin, (A Few Good Men, The American President, Charlie Wilson’s War and The West Wing), wrote the screenplay and also directed. The cast all perform admirably but the movie itself sacrifices or alters some of the facts for the purpose of dramatization in several instances. And that is somewhat disappointing. The character of Daphne O’Connor, for instance, an undercover police agent assigned to befriend and report on Rubin, is a complete fabrication. The murder of Black Panther Fred Hampton did indeed take place, but was not the reason why Seale was gagged and chained after his courtroom outburst over the killing. In reality, Hampton was murdered after Seale’s trial had already been severed and the man was no longer present at the trial of the other seven.

Of the seven defendants, Abbie Hoffman, Jerry Rubin, David Dellinger, Tom Hayden, Rennie Davis, John Froines and Lee Weiner, it was Dellinger, not Hayden, who attempted to read out the list of thousands of names of American servicemen who had died in the Vietnam War since the commencement of the trial. Furthermore, Dellinger was immediately held in contempt and not permitted to continue reading from the list. In the movie, we see Hayden reading out the list, the implication being he was able to read out all the names and that this brought about the end of the trial. This was simply not the case. Also, the scene in which Dellinger punches out a courtroom official was created for the picture. He never punched anyone. For those unfamiliar with the ‘Chicago 7’, this picture is most interesting, especially given the current political climate (November 2020) in the United States, but the altering of facts for dramatic effect, in my view, detracts from the overall impact. This was an important moment in US history. It did not need a Hollywood facelift.

In real life, five of the seven defendants were convicted of ‘inciting to riot’ but not for ‘conspiracy’. Judge Julius Hoffman sentenced all seven to lengthy prison terms for ‘contempt of court’, but ultimately all convictions were overturned. Right from the beginning of proceedings, Judge Hoffman made it abundantly clear he was markedly biased in favour of the prosecution and that he disliked the defence counsels, especially William Kuntstler. In fact, Hoffman later sentenced him to four years’ for contempt for addressing him as ‘Mr. Hoffman’ instead of ‘Your Honour’! Abbie Hoffman was given eight months for laughing in the courtroom. Other defendants were sentenced on ‘contempt’ charges because they did not stand when the judge entered the courtroom. 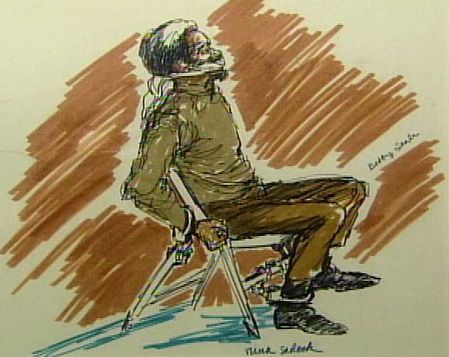 Seale bound & gagged in the courtroom for days

The treatment of Seale was even more horrendous. The judge refused the man’s request for a postponement until his counsel could be well enough to be released from hospital following a gallbladder operation. Hoffman not only refused his request but would not permit him to defend himself either. When Seale protested, the judge ordered him bound, chained and gagged! He remained so for several days until he was severed from the trial of the ‘seven’ and told he would be separately tried at a future date. That trial never took place, but Hoffman still sentenced him to four years gaol for contempt. The US Court of Appeals would later overturn Hoffman’s unconstitutional actions. In a final gesture of contempt for the defendants and their counsels, the judge ordered the barbers at the Cook County Jail to cut their long hair because he found it ‘offensive’! 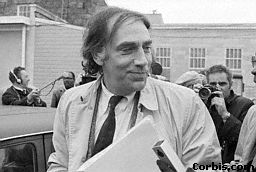 Ramsay Clark, who had been the US Attorney-General under President Johnson at the time of the 1968 Democratic Convention, was barred by the judge from testifying before the jury. He was only permitted to testify outside the presence of the jury. Even so, Hoffman upheld all fourteen of the prosecution’s objections to thirty-eight questions put to Clark. The trial lasted four months and saw many celebrities from the American ‘left’ and counter-culture called to testify – among them singers Arlo Guthrie, Judy Collins, Phil Ochs and Country Joe McDonald; writers Norman Mailer and Allen Ginsberg; plus activists Timothy Leary and Jesse Jackson. In November 1972, the US Court of Appeals reversed all of Hoffman’s sentences, citing as unconstitutional his refusal to permit defence counsels to screen prospective jurors for cultural and racial bias, and for the FBI surveillance of the defence attorneys’ offices. 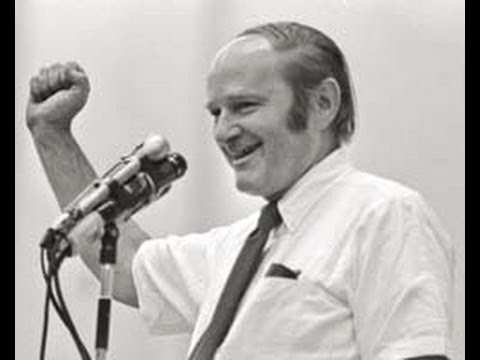 Tom Hayden would wed actress and political activist Jane Fonda in 1973, their seventeen-year marriage producing a son, actor Troy Garity. Hayden served in the California State Assembly and later in the State Senate, ultimately passing away in 2016, aged seventy-six. Abbie Hoffman was a social and political activist, co-founder of the ‘Yippies’ and a leading proponent of the Flower Power movement. He was found dead in his apartment in April 1989, a coroner ruling ‘death by suicide’, through the ingestion of 150 phenobarbital tablets and some liquor. He had been diagnosed with bipolar disorder in 1980. He was fifty-two at the time of his death.

As for Judge Julius Hoffman (no relation to Abbie, incidentally), a survey of Chicago attorneys who had recently appeared before him found that 78% had an unfavourable opinion of his courtroom conduct. They responded overwhelmingly in the negative to the questions: ‘Does he display an impartial attitude?’ and ‘Is he courteous to both the prosecution and defence?’ In 1982, the Executive Committee of the United States District Court ordered that he not be assigned any new cases because of a) his age, and b) complaints about his erratic and abusive behaviour from the bench. He died the following year, shortly before his eighty-eighth birthday.