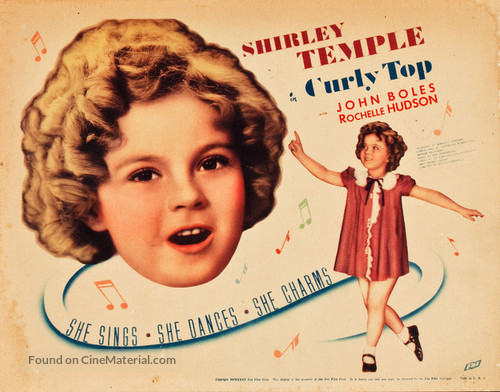 This Shirley Temple vehicle was one of the last films made by the Fox studio before it amalgamated with the hitherto rival studio of Twentieth Century Productions to become 20th Century Fox. The amalgamation saw former Fox strongman Winfield Sheehan sent packing with a half million dollars settlement to compensate for his hurt feelings. The dynamic duo from Twentieth Century, Joseph M. Schenck as Chairman of the Board and Darryl R. Zanuck as vice-president and head of production, were the new powers in the newly named studio, both well aware of the importance of their superstar, eight year-old Shirley. The first thing Zanuck did was bump the girl’s mother’s salary to $1,000 a week!

Curly Top was a financial, box-office success, but it was not universally accepted without reservation. Whereas, in China, it pleased Madame Chiang Kai-shek enormously, it was actually banned from theatres in Denmark for ‘unspecified corruption’, whatever that meant. Swiss and Italian authorities were slightly more specific, claiming that Shirley’s character’s behaviour was ‘setting a bad example for children’. The picture is a re-working of the 1919 Mary Pickford outing Daddy Long Legs, and is memorable only for introducing Shirley’s hit tune ‘Animal Crackers in my Soup’ to her adoring public.

As for the diminutive star herself, she wrote of faltering during filming, something she rarely (if ever) did. ‘The monologue in Curly Top was particularly long’, she recalled, ‘and midway I had suddenly looked cross-eyed and stopped speaking. Irving Cummings, the director, was listening rather than watching. ‘I thought you were One-Take-Temple,’ he said. ‘I am,’ I insisted, standing stock-still. ‘But there is a fly sitting on my nose.’ This movie, despite its limitations, almost tripled Fox’s previous year’s profits. Such was the box-office clout of the uniquely amazing Shirley Temple.

Argo is an entertaining, edge of your seat, thriller, but it runs foot-loose and fancy-free with the truth. Like many a film that purports to be ‘based on a true story’, this one bends and twists the facts to enhance the drama. Although that is accepted these days as ‘par for the course’, it nevertheless makes a mockery of history. And that is disappointing. For example, former President Jimmy Carter told Piers Morgan in an interview that, ‘ninety percent of the contributions to the ideas, and the consummation of the plan was Canadian, yet the film gives almost full credit to the American CIA. Carter went on to say, ‘…the main hero, in my opinion, was Ken Taylor, who was the Canadian ambassador, who orchestrated the entire process.’

The movie is about the execution of a plan to rescue six Americans staff members from their embassy in Tehran, Iran in 1979, from under the noses of the Iranian Republican Guard. The six had exited the embassy just before the place was over-run by angry crowds who captured and held hostage fifty-two of their colleagues for the next 444 days. The six fled to the Canadian Embassy and were secretly taken in and hidden. A plan was hatched to have them pose as a film crew scouting locations in Iran for a phony sci-fi movie titled Argo. Ben Affleck plays Tony Mendez, a CIA ‘extractions’ expert, whose job it is to fly into Tehran, train the six in their roles as movie executives, technicians, screenwriters etc, and then spirit them out of the city by air to Switzerland and then home to America. In reality, Mendez was only in Tehran for a day and a half. 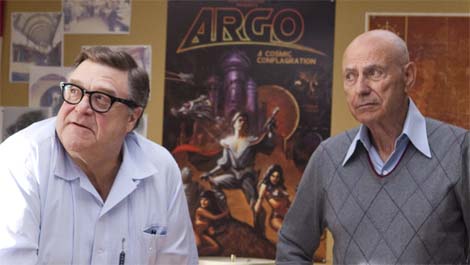 Early in the movie it is stated that both the British and the New Zealand embassies turned the six away before the Canadians agreed to take them in. That is a falsehood. The diplomats actually stayed at the British Embassy for a few days, until it was unanimously agreed that the safer option for the six would be with the Canadians. A New Zealand official transported them while the British were busy helping other Americans trapped in Iran at that time. In real life, the six diplomats showed up for their flight out of Tehran at 5.30 am, and did so with booked tickets. There were no Republican Guards at the airport at that time. It was simply too early in the morning for them.

It is interesting to note that, after the picture was released, Iran hired a radical lawyer in France to pursue a lawsuit against the film. The charge was that the movie was designed to pave the way for US military operations against the Iranians by garnering anger against Iran for the embassy hostage crisis. Affleck himself was accused of committing war crimes, even though he and screenwriter Chris Terrio had included a prologue in the opening credits that detailed how the US had helped install the Shah in power. The voice-over further detailed how the Shah indulged in corruption and was directly responsible for the brutality of his secret police. The French court dismissed all charges against the film-makers and director Affleck as ‘groundless’. Incidentally, the real Mendez passed away aged 78 in January 2019, of complications from Parkinson’s disease. 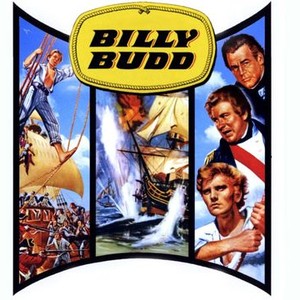 This terrific film was directed by Peter Ustinov who also starred in it. Based on the 1888 short story of the same name that was penned by Herman Melville, author of ‘Moby Dick’ in 1851. Ustinov bought the screenplay in 1956 and personally wrote the shooting script. He was mortified when Allied Artists attempted to make his picture more commercialized by giving it a ‘happy ending’. Ustinov sarcastically asked if Ben-Hur would have been a greater success if Christ had been rescued from the crucifixion! In the end Billy Budd’s tragic ending was retained. Terence Stamp is wonderful in the title role, but Robert Ryan arguably steals the film with his brilliant turn as Billy’s sadistic nemesis, Master-at-Arms, John Claggert. The picture is set during the Napoleonic Wars and Ustinov portrays Captain Vere of HMS Avenger.