This film was released 236 years after events associated with the Treaty of Madrid (1750) – also known as The Spanish-Portuguese Treaty – saw the Spaniards hand over part of Paraguay to Portugal. Jeremy Irons portrays a Spanish Jesuit devoted to converting the local Indians in the Paraguayan wilderness to Christianity. Robert De Niro is a former slave trader and mercenary whom he converts to the Jesuit order. Spain’s sale of the colony to the Portuguese sees the two men forced to defend their mission and its converts from marauding Portuguese slave traders.

According to ‘The Mission and Historical Missions: Film and the Writing of History’ (1995) by James Schofield Saeger, the Spanish decision to ‘compensate’ each mission handed to the Portuguese by giving them 4,000 pesos, (considerably less than half a peso for each of the 30,000 Guarani Indians inhabiting the seven missions), was an insult to a people whose cultivated lands, livestock and buildings were estimated to be worth between seven and sixteen million pesos! 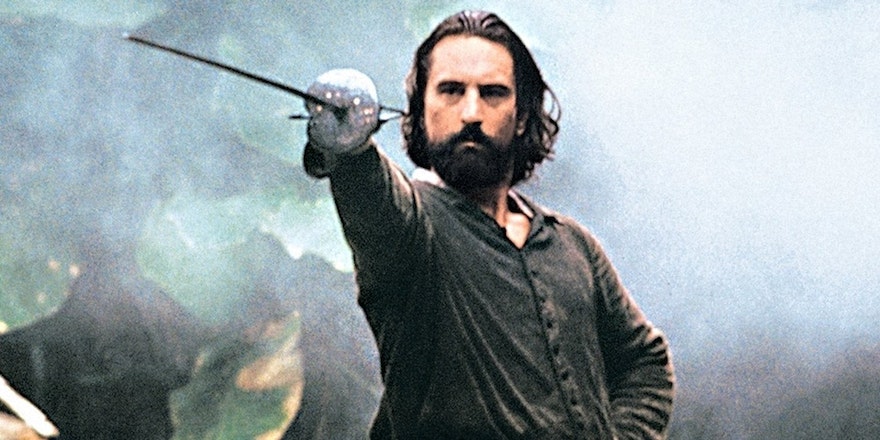 Many of the people who played the local natives were indigenous South Americans with very little English, so they were given free rein to say whatever they wished in their scenes. It is generally believed that they took advantage of this and swore throughout. The picture is a very dark and disturbing drama that depicts the impact of Church and state on the lives of indigenous people in South America centuries ago. 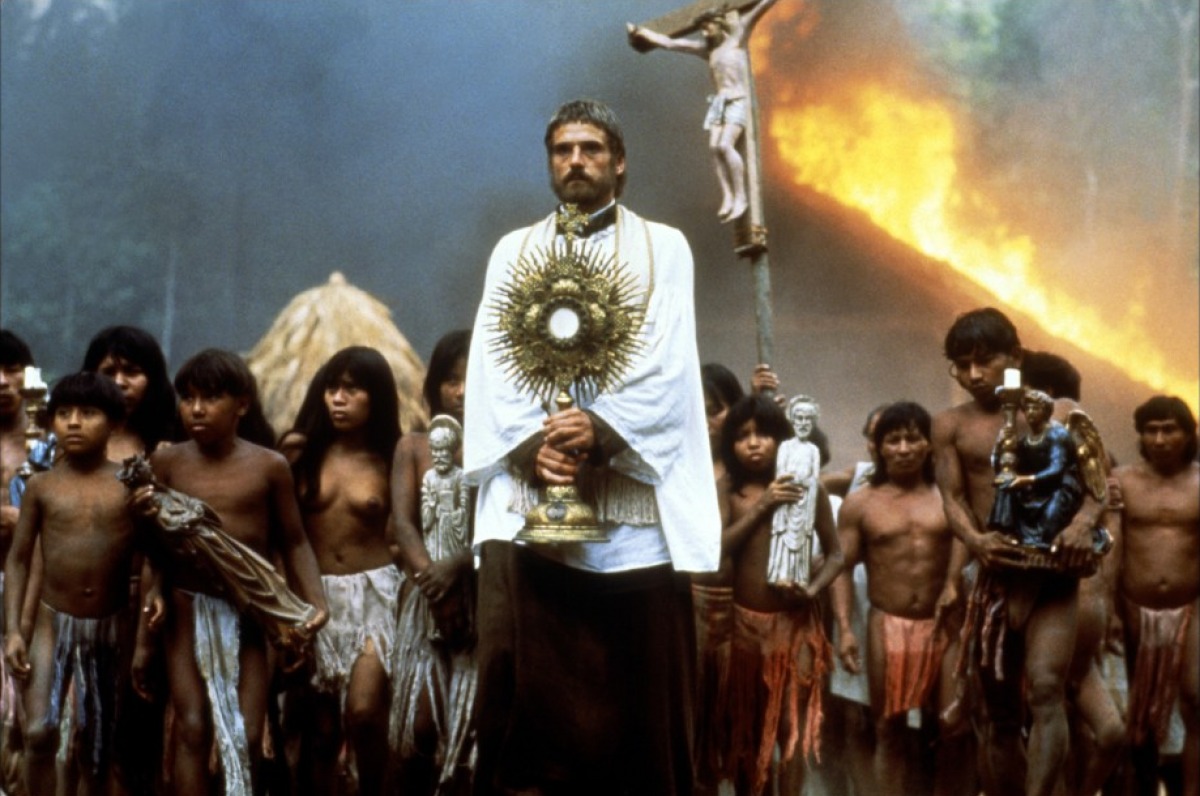 Cardinal Altamirano of the Catholic Church is faced with a moral dilemma, to choose between two evils. If he rules in favour of the colonists, the indigenous people will be enslaved. A ruling in favour of the missions might see the entire Jesuit Order condemned by the Portuguese, an outcome that might fracture the European Catholic Church. The result is the Guarani War of 1754-6. In real life Altamirano was not a cardinal of the Catholic Church, but an emissary sent by the Society of Jesus. In The Mission he is memorably portrayed by Irish actor Ray McAnally who, three years later, would superbly play Daniel Day-Lewis’ father in My Left Foot (1989). Sadly, he would die suddenly from a heart attack in June of that same year.

The Mission received mixed reviews from the critics, mainly because of its staid presentation. Audiences and critics alike found it difficult to emotionally invest in the welfare of its characters. The scenery is quite breathtaking, the musical score from Ennio Morricone moving and majestic, but the subject matter was wanting. Perhaps, if there had been a focus on a few individual tribes-people, interest may have been elevated, but the entire character focus fell on the Jesuits and their white foes, which detracted from the human element of the picture’s tragic theme. The film grossed just over $17 million US, but had cost around $25 million US to make and distribute; deeming it a box-office flop. 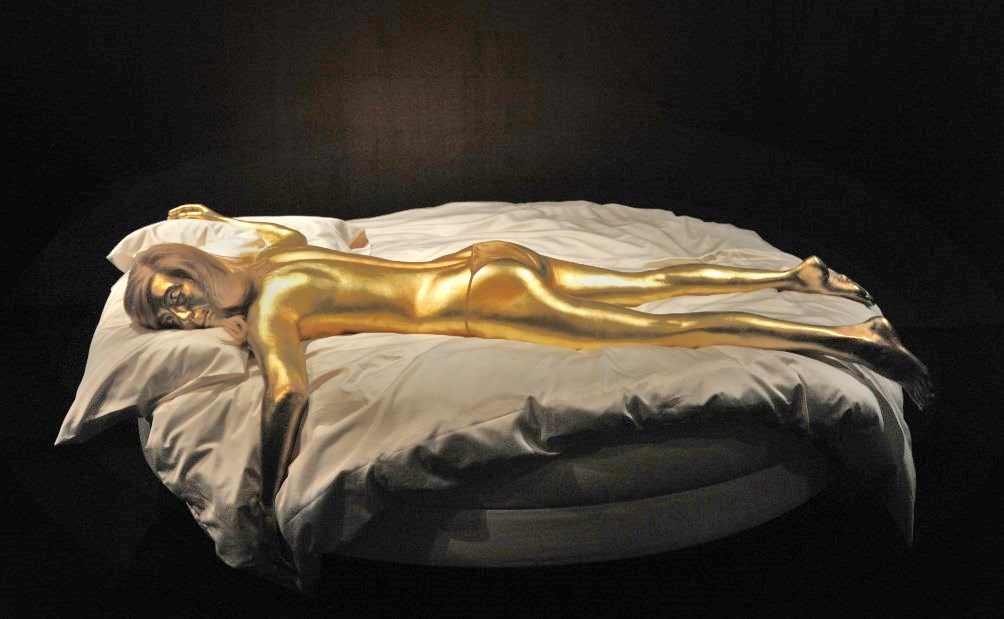 In the first volume of Let’s Go to the Movies, I criticized the ridiculous plot lines in the third James Bond film, Goldfinger, but there are a couple more issues in that silly film that still need addressing. Firstly, I could never quite comprehend why Auric Goldfinger would order the murder of Jill Masterson (Shirley Eaton) in the way depicted. Would he really send in a team to the murder scene with instructions to strip the girl, paint her entire body in gold paint, then wait around for her to die from, (wait for it), ‘skin suffocation’? And while all this is transpiring, James Bond remains alive in the kitchen, having been karate chopped into unconsciousness by Goldfinger’s henchman Oddjob. Would the only person who knew Jill had betrayed Goldfinger be allowed to live and possibly tell his story to the police? Hardly. When 007 awakens he finds the girl dead on the bed – not strangled or stabbed or whatever – but ‘suffocated’. ‘She died of skin suffocation’, Bond tells ‘M’, his boss. ‘It’s been known to happen to cabaret dancers. It’s all right as long as you leave a small bare patch at the base of the spine to allow the skin to breathe.’ Poppycock! We do not rely on our skin to breathe! 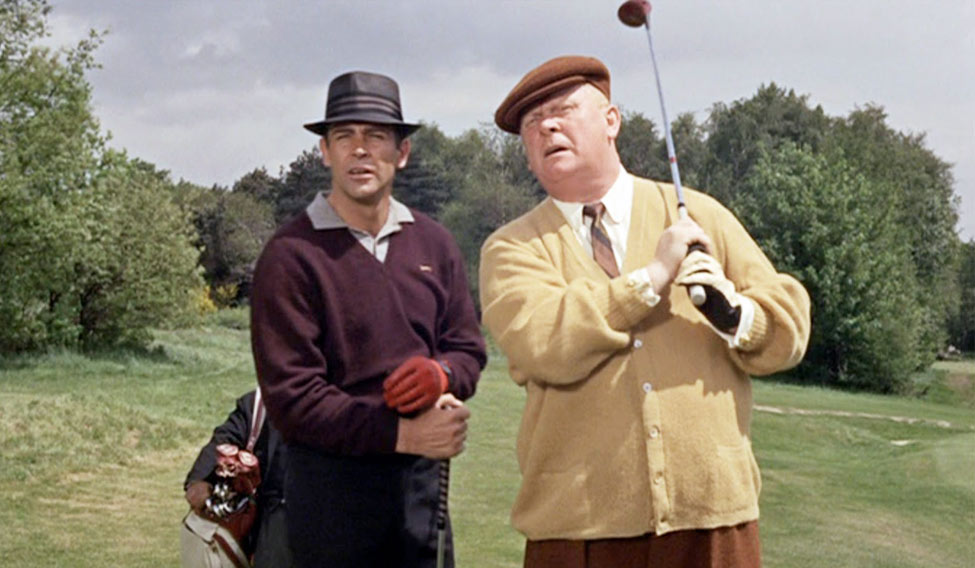 The golf game between Bond and Goldfinger is worthy of discussion as well. First of all, Goldfinger owned the private golf club, so would he really accept being paired against a complete stranger when he rolled up for his game? Not a chance. And anyway, what happened to the people he had intended to play his round with? Bond’s elderly caddy obviously works at the club, yet he is quick to help Bond cheat the owner! Anyone who has ever played golf could instantly see that Sean Connery (Bond) was a highly competent player, an extremely fit young man in his early thirties when the movie was made. Gert Frobe (Goldfinger), on the other hand, cannot play at all, is grossly overweight, and was in his early fifties at the time of filming. Despite this, he agrees to risk thousands of pounds against Bond in match play. Surprise, surprise, 007 wins by a single stroke but he has to cheat to do so! 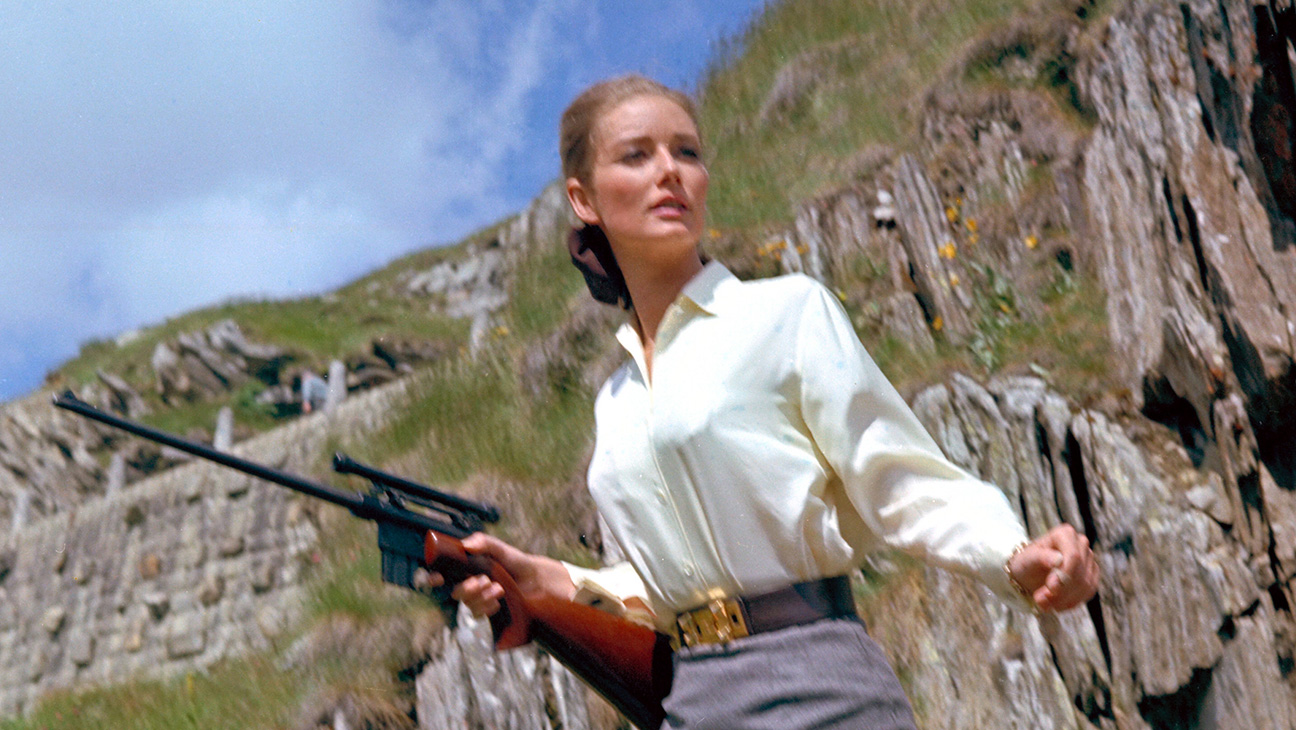 The story then moves to Switzerland where Bond encounters Tilly Masterson (Jill’s sister). She is hell bent on killing Goldfinger because, as she tells 007, ‘he killed my sister’. How could she know that? The Miami police had not even questioned him. Tilly arrives in Switzerland (armed with a collapsible sniper’s rifle in a case). How did she get that through airport security? Previously, back at the golf club, Oddjob had demonstrated the killing power of his steel-rimmed bowler hat (surely, the most outrageously stupid murder weapon in movie history), by using it to decapitate a marble statue in the car park. When he uses it again in Switzerland to kill Tilly, it merely leaves a bruise as it breaks her neck! Despite being a seasoned killer himself; despite being in a fight for his life, Bond immediately ceases fighting Oddjob and his cronies, visibly affected by the girl’s death even though he scarcely knows her. One extra comment on Bond: Why does he always use his real name wherever he goes? He is, after all, supposed to be a secret agent, yet every bartender on the planet knows he likes his martinis ‘shaken not stirred’. If you are interested in my major beefs regarding Goldfinger (1964), you might care to check out the first volume of Let’s Go to the Movies on kindle at Amazon.com.