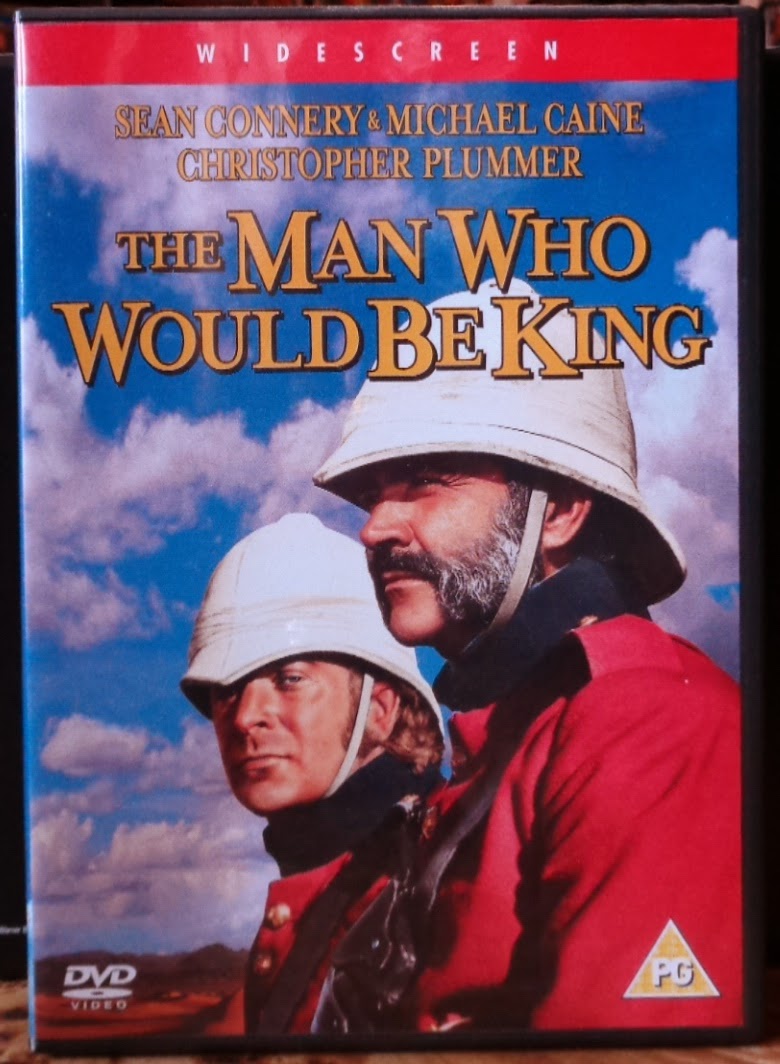 Michael Caine and Sean Connery play two ex- British Army non-coms named Peachy Carnehan and Daniel Dravot in this delightful adaptation of Rudyard Kipling’s 1888 novella of the same name. It is set in the 1880s in India where Kipling (played by Christopher Plummer) is employed as a co-respondent with a local newspaper. He meets the two non-coms who inform him of their outrageous intention to make their way to Kafiristan to the north of India and Afghanistan, where they plan to become kings. The film follows their adventures and the expedition’s tragic outcome.

The picture is directed (and co-written) by John Huston. He had attempted to make it several times before but something always got in the way. His initial idea was to make it a vehicle for Clark Gable and Humphrey Bogart in the fifties, but Bogart’s death stopped that project in its tracks. He was still considering a replacement for Bogie when Gable died from a heart attack in 1960. Later, he imagined pairing Burt Lancaster and Kirk Douglas; then it was to be Richard Burton and Peter O’Toole. When he came up with Robert Redford and Paul Newman, the latter suggested he try Connery and Caine. 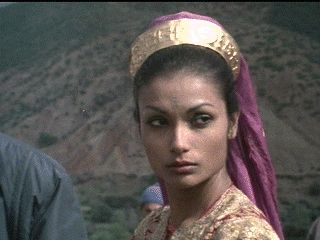 There was a hiccup early in the piece when the producers threatened to fire Christopher Plummer, but Connery told them he would walk away from the picture if they did so. He got his way. Plummer was actually a late replacement for Richard Burton. Both Sean and Michael have always maintained that this was the most enjoyable movie they ever made. It cemented their lifelong friendship, one that continues to this day (September 2020). During the shoot, they became disgusted by the treatment dished out to their Indian-born supporting actor Saeed Jaffrey, (he played the Gurkha, Billy Fish). The man was not even given a chair to sit on between takes when they were on location in Morocco. Caine, to his everlasting credit, lost his temper with the crew and roared: ‘Get this man a fucking chair!’ They did so at once.

Huston had not yet cast the role of Roxanne when filming began. Someone suggested he give the role to Caine’s wife, Shakira, who was there with her husband. A great beauty, she had been named Miss Guyana in 1967, before finishing third to Miss Peru in the Miss World pageant! She agreed to take the part but found acting rather monotonous and never appeared on-screen again. Connery was the victim of a humorous prank between filming. Not wishing to offend a local sheikh he condescended to eat some sheep-eyes at a dinner, little realizing that the sheikh he was concerned about offending was, in fact, the heavily disguised British comedian Eric Sykes playing a prank on him!

I have seen The Man Who Would be King several times and have always been delighted by the rapport that exists throughout between Connery and Caine. They are perfect in their roles and I can scarcely imagine any other two actors doing a more convincing job, yet there were critics who berated Caine’s performance, in particular, saying he overplayed his part. I could not disagree more. In my humble opinion his character is the most interesting in the movie and he does Peachy Carnehan proud. I must add that both Connery and Jaffrey are also quite excellent. Indeed, Sean has since said that this was his favourite movie role – ever! 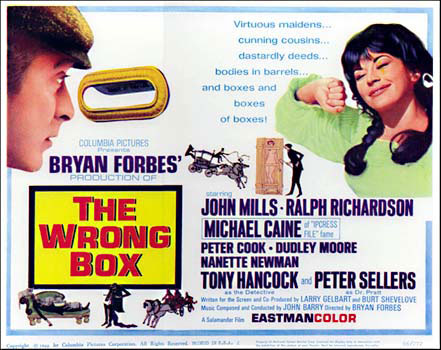 This British comedy (so-called) was produced and directed by actor turned director Bryan Forbes. If you have been fortunate enough to see the fine WW2 film The Colditz Story (1955), you might remember him playing Jimmy Winslow, one of the escapees. If, on the other hand, you happen to have seen The Wrong Box, well, you have been decidedly less fortunate; for this is one of the un-funniest comedies I have ever seen! It is not the fault of the players, I should hasten to add. The greatest actors who ever lived would be defeated by its utterly lifeless screenplay. As unlikely as it might seem, the story is based on an 1889 novel of the same name, partly- penned by none other than the renowned Robert Louis Stevenson, author of Treasure Island (1883), Strange Case of Dr Jekyll and Mr Hyde and Kidnapped, (both published in 1886). Lloyd Osbourne co-wrote it. 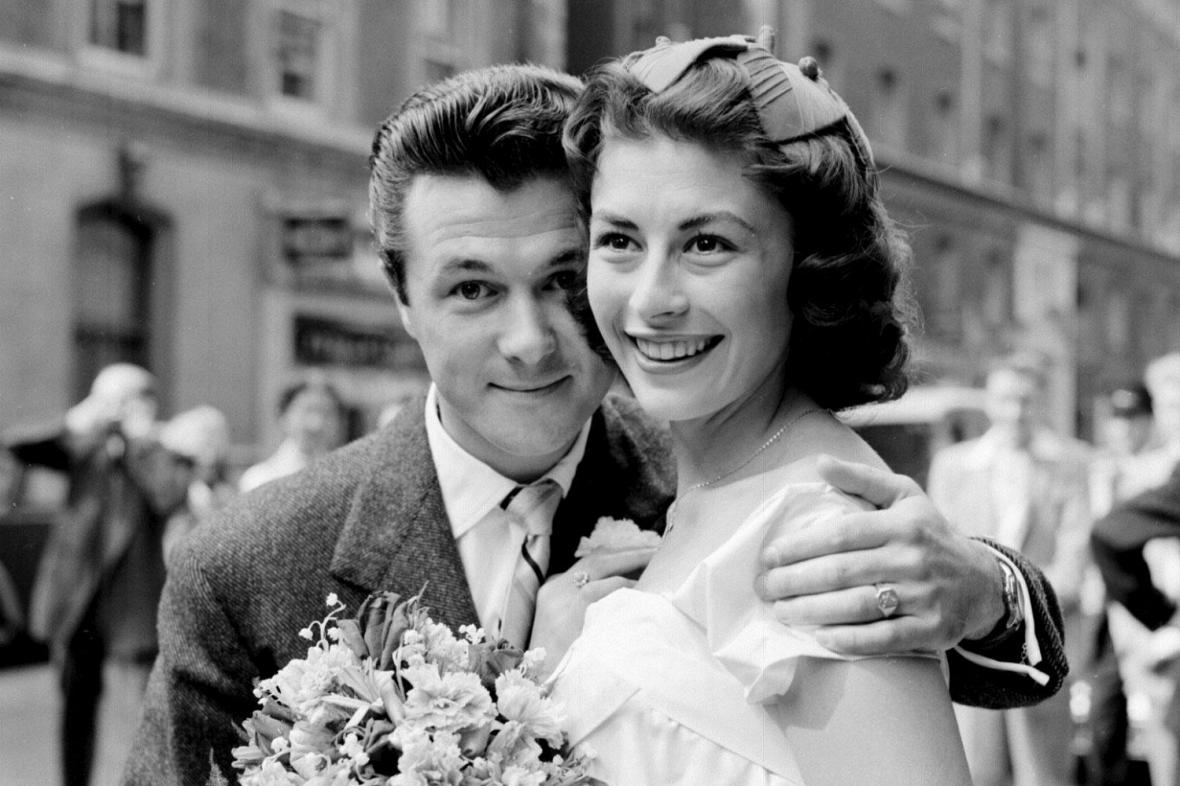 There is no accounting for taste, I suppose, but I recently read one review that described this exercise in ennui as ‘one of the ten best movies ever made.’ Ever! Clearly, the reviewer in question may only have ever seen a total of ten motion pictures in his entire life, thus The Wrong Box has fallen into tenth place by default. The British public stayed away from it in droves – and rightly so. Peter Cook and Dudley Moore were on a roll when they chose to debut in this, but even they could not breathe life into the lines and situations they found themselves in. As I struggled to watch The Wrong Box through to its pathetic conclusion, I found myself drawn to the solitary factor that was at least watchable – to me, anyway. Nanette Newman (the director’s real life wife), was no great thespian but she was quite beautiful, similar in looks to the exquisite Irina Demick who played seven roles in Those Magnificent Men in Their Flying Machines…a year earlier. 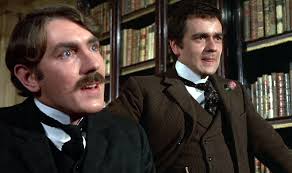 As for Bryan Forbes, the director, he proved himself adept at helming more serious films, but he never should have taken on a comedy. Not this one anyway. In fact, he was offered the first James Bond film Dr No (1962), but had turned it down. One wonders what the likes of John Mills and Ralph Richardson thought as they turned up on the set each day. Peter Sellers and Tony Hancock (his last film) were completely wasted as well. It was 1966 and Michael Caine was hot off Zulu (1964) and The Ipcress File (1965). His iconic Alfie was released in March ’66, two months ahead of The Wrong Box. All he has to do in the latter is look good, which he handles comfortably enough, but even his presence could not lift this material out of the doldrums. I love British humour but, sadly, this is not humour of any nationality.