It is odd that this series did not go into a second season, because it was certainly a western with a difference. The main problem, of course, was that saturation point for the western genre had been well and truly reached by the early sixties. Even so, Hotel de Paree was an unusual show, albeit a gimmicky one. Earl Holliman portrays ‘Sundance’, a recently released killer who comes to Georgetown, Colorado, initially intent on harassing (wait for it), the widow and niece of the former owner of the hotel in question, the very man he had killed three years earlier!

He tangles with the town villain, kills him and, regardless of his ex-con/killer status, becomes town marshal. As far as gimmicks go, he has a unique one indeed – his hatband! Even though he is fast on the draw and a crack shot, the new town marshal has an extra ‘edge’ over his rivals. A row of shiny, polished silver dollars around his hatband temporarily blind (or distract) his opponents long enough at the vital moment to afford him a distinct advantage. Of course, some might say this is underhanded, even cheating. Heroes are not supposed to do such things. Well, a gimmick is a gimmick, I guess.

The Hotel de Paree is owned by Annette Deveraux (Jeanette Nolan) and her niece Monique (Judi Meredith). Sundance befriends them and audiences spend the next thirty plus episodes wondering just how friendly is his relationship with the ladies in question. Annette desires him secretly; Monique desires him openly. Which one is he privately involved with? Or is he involved with both? The question is left unanswered. Holliman was 30 when the series was filmed; Ms. Nolan was 47 and Ms. Meredith was 22. Draw your own conclusions. 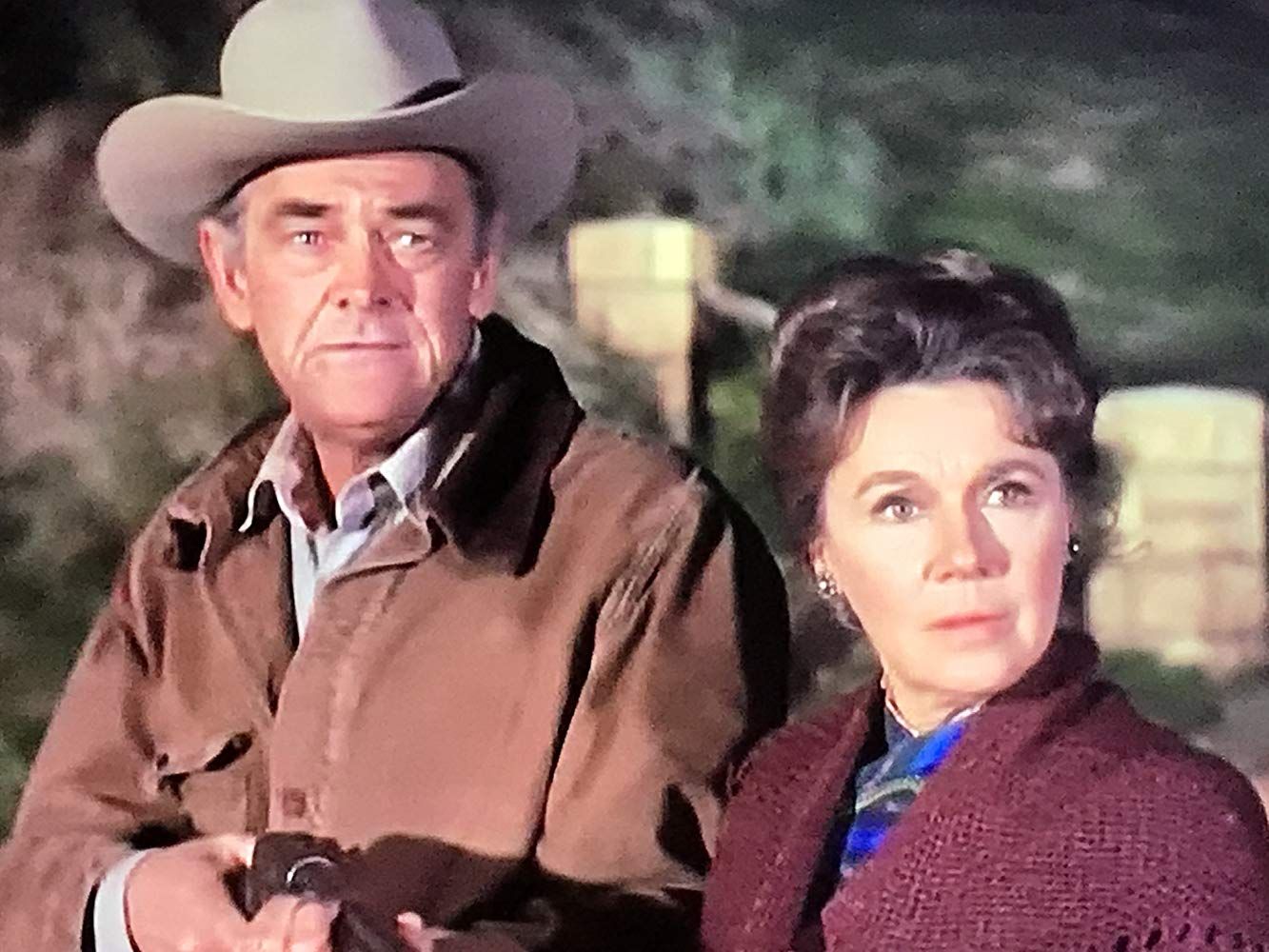 Jeanette Nolan (Annette) had been married to actor John McIntire for nearly fourteen years when this series was aired. Her husband had replaced Ward Bond as the wagon-master Christopher Hale in the highly popular series Wagon Train when Bond died in 1960, and remained in the role until the series ended in 1965. Jeanette appeared in three episodes, the third of which she played his wife Janet Hale. In real life they were married for 55 years until John’s death in January 1991. They had two children. Jeanette passed away seven years after him. Judi Meredith (Monique) was a star figure skater with the Ice Follies as a youngster until she broke her back in an accident that doctors said would prevent her ever skating again. She proved them wrong but then broke her kneecap in another fall and decided to try acting instead. In 1956, the 20 year-old beauty was spotted by George Burns and given a regular spot in his TV show. She dated Frank Sinatra and was probably the last lover of singer Bobby Darin prior to his marriage to actress Sandra Dee. Judi’s marriage to director Gary Nelson produced two children and lasted almost 52 years, until her death in 2014.

NBC toyed with giving the series a second season. The idea was to re-name it ‘The Sundance Kid’, have Holliman leave Georgetown and the Hotel de Paree, and to then wander throughout the west (just like almost every other western hero in TV series), tackling bad guys. Gone would be the titillating implied romances between him and Annette or Monique (or both). In other words, the suggestion was to remove the only angle that made the series watchable in the first place. Wiser heads prevailed, however, and the series was cancelled at the end of the first season.

This series was loosely based on the 1962 film of the same name. A two-hour pilot film titled The Macahans was released in 1976, a mini-series followed in 1977; and then the regular series from 1978-9. The show was very popular in Europe but less so in the United States for some reason. James Arness (of Gunsmoke fame) stars as mountain man/ex-US Army scout Zeb Macmahon. Eva Marie Saint plays his sister-in-law Kate and Bruce Boxleitner is cast as her son Luke. Incidentally, Luke’s sister Laura is played by Kathryn Holcomb who, in 1977, would become Boxleitner’s first wife and provide him with two children over their ten-year marriage. In fact, it would be Kathryn who would introduce him to his second wife, Melissa Gilbert, of Little House on the Prairie fame.

The film, mini-series and regular series extend through the US Civil War and beyond as Zeb endeavours to move his family west. Trials and tribulations abound as they encounter evil mountain men, bounty hunters, marauding Indians, scavengers and other westerners bent on no good. Unfortunately, somewhere along the way, the writers got carried away, creating a series of ludicrous subplots based on the highly-publicized state visit to the Dakotas by Grand Duke Alexai of Russia in 1871. The actual visit was a most congenial affair, a hunting expedition arranged between the US Army, Buffalo Bill Cody and Sioux Chief Spotted Tail. The Sioux approved of the hunt, even participated in it, eager to demonstrate their horsemanship and marksmanship to the Grand Duke. A wagon train containing tons of coffee, sugar, tobacco and other provisions, was given to the Sioux in exchange for the use of their hunting grounds and everybody seemed to get along with everybody else.

This was far too tame for the writers of the mini- series, of course. They fictionalize the meeting between the Sioux, the visiting Russians and their US Army hosts, introducing mounting hostility and violence that devolves into a plethora of melodramatic instances of mayhem. In rapid succession the writers has the Russian visit degenerating into poaching, kidnapping, murder, political crisis, warfare and genocide. This absurdity ultimately climaxes with an equally absurd ritual suicide. Even today, there are those who believe the conflict between the Sioux and the US Army was the direct result of the Grand Duke’s visit. Such is the worrisome power of television and movies.

The use of dramatic license aside, this series is extremely well acted and holds the viewer’s attention throughout. Arness is especially good and it could be successfully argued that it did much to launch the career of Bruce Boxleitner. It almost goes without saying that Eva Marie Saint is at her professional best – as always. Fans have been quick to claim that How the West was Won is the best ever western mini-series. But I beg to differ. In my opinion, there will never be a better, more realistic, more moving, or better acted western mini-series than the quite brilliant Lonesome Dove (1989).