When this blockbuster was released by Paramount Pictures in 1947 it became that year’s top-grossing US film, despite its numerous shortcomings that included a couple of laughable scenes that were supposed to be taken seriously. But I shall come to them later. Gary Cooper was 46 years old and quite ill when the picture was shot, so the make-up people had to work extra hard to have him appear at least semi-passable as a young frontiersman. They did not succeed.  His leading lady, Paulette Goddard, looked quite striking in Technicolor, but struggled (as did everyone) with the woeful screenplay. In fact, there were a couple of speeches so poorly written that Cooper actually refused to speak them.

Paulette, who was Mrs. Charles Chaplin at the time, incurred the wrath of director Cecil B. DeMille when she point blank refused to allow fireballs to be hurled at her during the climactic battle scene. An infuriated DeMille was heard to scream, ’Get her out of here! Get her out before I kill her!’ He was compelled to substitute a stunt double in her place and the poor woman selected suffered burns in the process, thereby vindicating Paulette’s refusal to participate in the scene. Vindicated or not, DeMille was enraged and would not speak to Goddard for several years. Five years later, he was directing The Greatest Show on Earth (1952) when she accepted a key role in the film. He exacted his revenge by replacing her at the last minute with Gloria Grahame.

The sixty-six year-old DeMille wanted to make a film that romanticized colonial conquest in and around Pennsylvania in the 18th century. To achieve this he was content to demonize the Native Americans who stood in the way of this colonialization. Consequently, he used a script riddled with stereotypical clichés about massacre-happy Indians who delighted in slaughtering settlers and torturing captives to death. Paulette’s character (Abby Hale) proclaims at one point: ‘The Indians will always burn, torture and kill to get back the wilderness.’ Quite an astute observation by her character, considering she had only just arrived in the colony as an indentured slave. DeMille had hired two researchers prior to the commencement of shooting, paying them $100,000 for their services, in order to give his movie historical accuracy. Then he sacrificed that accuracy at every turn.

As for the two ludicrous moments referred to earlier, it is interesting to note that theatre audiences back in 1947 laughed out loud at the second of them even then. The first one took place in a scene in which Cooper’s character (Chris Holden), accompanied by two elderly frontier scouts, halts in a clearing to size up their situation. Suddenly, an arrow whizzes out of the forest and hits one of his companions, evidently killing him instantly. The camera pans to the unfortunate man who is seated on his horse, already dead, with the arrow sticking in his side, just above his belt. ‘Shot clean through the heart’, observes the other scout. Perhaps, back in the 18th century, a frontiersman’s heart was positioned alongside his stomach!

The famous (but laughable) waterfall stunt.

The scene that brought howls of derision, however, was the one in which Chris and Abby, pursued by four war canoes full of Indians, zoom through some rapids, only to be confronted by a huge waterfall! Fortunately, Chris had checked out the falls on his way to rescue Abby from the Indian village, and had taken particular note of a thin sapling protruding from the side of the rocks near the top of the falls. As they race towards this very high waterfall, Chris tells Abby to loop his sash around his neck and to tie it under her arms. This she somehow accomplishes as they hurtle towards the drop. ‘Jump, when I say jump’, he instructs her (or words to that effect). As the canoe goes over the edge, Chris and Abby leap in unison and, as they plummet downwards, catch the sapling which, (most conveniently), deposits them on a ledge beneath the top of the falls. Unconquered is worth watching for this gob-smacking, incredibly stupid moment! Incidentally, the film was nominated for just one Academy Award – for Special Effects. Surely, not for that?

DeMille was more than happy to sacrifice historical accuracy, even logic, in return for an exciting moment or two. For instance, Unconquered is set in 1763 when Abby is convicted of murder and transported to the American colony as an indentured bond slave. History tells us that most Plains Indian tribes had horses in their culture by 1769, but the Seneca were forest dwellers and did not. DeMille altered history and gave them horses to pursue Chris and his scouting companion. He also decided to give Holden a reputation as a ‘quick-draw’ gunfighter! ‘I am not about to try to beat you to the draw, Holden’, says Garth at the film’s climax. Beat him to the draw? We are talking about flintlock pistols here, not Colt .45s! DeMille simply could not help himself. 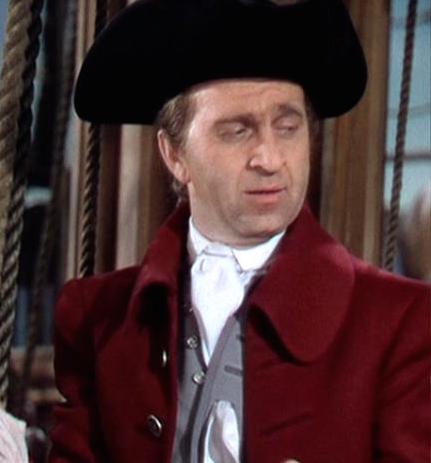 The cast for Unconquered included DeMille’s adopted daughter, Katherine, who portrayed Hannah, the Indian wife of the villain (Garth), played by Howard Da Silva. A few years later Da Silva would fall foul of the McCarthy Witch-Hunts and be blacklisted as a Communist. Katherine was about a third of her way through her 27 year marriage to Anthony Quinn, a union that produced five children. For some reason British horror-movie star Boris Karloff was cast as the Seneca chieftain Guyasuta. Throughout filming he stopped every afternoon for his 4pm tea-break, as stipulated in his contract. Before long, Cooper, Ms Goddard and even Chaplin (whenever he visited the set) would join him. Paulette, in fact, would have the same stipulation inserted into her contract for the remainder of her career.

DeMille’s original choice to play Abby was the British star Deborah Kerr, but her asking price was too high, so he paid Goddard’s fee of $112,000 instead. Cooper received $300,000 (twice his usual fee) and the overall salary outlay came in at one million dollars. The picture ran over budget by $394,000, bringing the total cost for the production to $4.3 million. The film’s bloated budget resulted in it losing about a million dollars even though it was considered to be Paramount’s second most successful movie of the year. New York Times film critic Bosley Crowther probably best summed up the picture when he wrote: ‘Unconquered is a picture worth seeing, if for nothing else but laughs.’