Eddie was born in Romania to Jewish parents who raised him in the Lower East Side of New York City after immigrating to the United States in 1904. After starring in Confessions of a Nazi Spy (1939), he joined numerous groups such as the Anti-Nazi League, ‘Bundles for Britain’, ‘Fight for Freedom’ and others. Many of these organizations attracted Communists and fellow travellers who often dominated the meetings. His association with these people would cause problems for him post-war with the House Un-American Activities Committee (HUAC). Throughout the thirties and forties he publicly spoke out against the rise of fascism and Nazism, contributing over $250,000 to over 850 organizations involved in war relief, along with cultural, educational and religious groups, between 1939 and 1949. His association with these people would see him brought before the committee during the 1950s ‘Red Scare’. He had been duped by some Communists and pressured into naming names to the HUAC, resulting in him publishing an article in the American Legion Magazine in October 1952, titled ‘How the Reds Made a Sucker Out of Me.’ The chairman of the HUAC, Francis E. Walter, told him that the Committee, ‘never had any evidence presented to indicate that you were anything more than a very choice sucker.’ 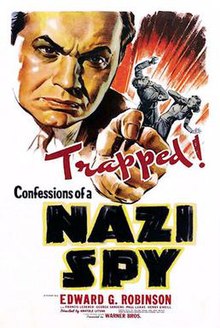 During the war, Robinson received death threats because of his public stance against the Nazis and over his involvement in Confession of a Nazi Spy. The threats became numerous enough for him to be afforded constant protection by Scotland Yard whilst he was in England. Eddie was one of the first entertainers to follow the troops into France after D-Day. He was not a singer, neither could he dance, nor was he capable of delivering even the most basic comedy routine, so he did his ‘Little Caesar’ impersonation wherever he appeared. ‘It embarrassed me every time I did it’, he confessed, ‘but they loved it.’ Of course, he was over fifty years old by then and far too old for active service, but the man did not lack the courage of his convictions, risking his life almost every time he went public or attended an anti-Nazi gathering. Back in his younger days he had served in the United States Navy during the First World War, although he never went overseas. In fact, he volunteered for military service in 1942 as well, but was rejected because of his age. He was forty-eight. 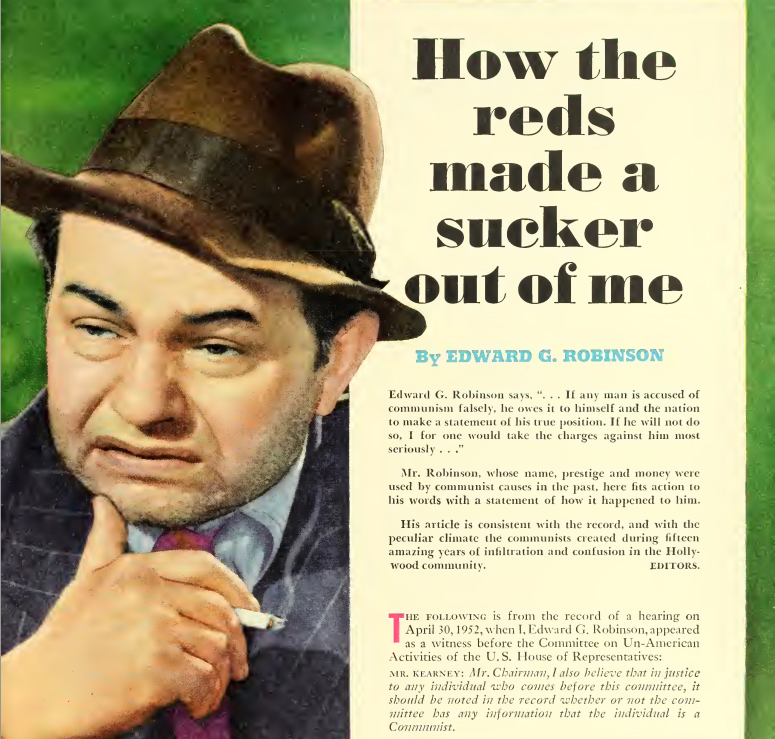 Back in December 1938, he had hosted the Committee of 56, a gathering at his home that signed a ‘Declaration of Democratic Independence’, calling for a boycott of all German-made products. After Pearl Harbor, the Office of War Information appointed him as a Special Representative based in London. Utilizing his multi-lingual talents, he delivered messages over the radio in six languages to Nazi-occupied countries in Europe. Serving on the executive board of the Hollywood Democratic Committee in 1944, he campaigned enthusiastically for Roosevelt’s re-election that year. He also broadcast for Pan-Americanism throughout South America on the CBS radio network. The man was a tireless hero of the war whose efforts have virtually gone unacknowledged. Edward G. Robinson was never even nominated for an Oscar throughout his wonderful career. Did this have anything to do with him ‘naming names’ to the HUAC? Possibly, although the likes of Elia Kazan and others bent on preserving their careers still received accolades. Robinson died of bladder cancer in 1973. 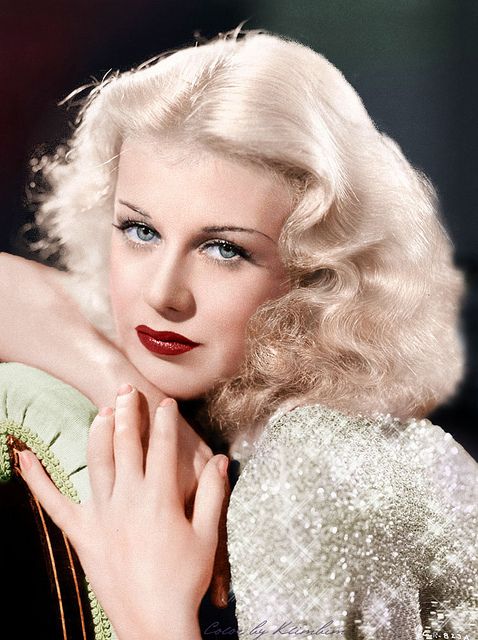 She was born Virginia McMath in Independence, Missouri in 1911, the name ‘Ginger’ originating with her young cousin Helen who had a hard time pronouncing Virginia. The surname Rogers came from her mother’s second husband. Although she won an Academy Award for Kitty Foyle (1940), Ginger is predominantly known for the ten musicals she made in the thirties and forties as the dancing partner of the inimitable Fred Astaire. It is fair to say that her prototypical stage mother Lela did all in her power to get her daughter to the top in Hollywood, but it was Ginger’s talent, beauty and penchant for hard work that were primarily responsible for her success. And, boy, was she successful! The power that she wielded during the Great Depression and World War Two was almost unfathomable.  A role model for women, she exuded a feminine determination in an era and industry dominated by men. During the war she toured tirelessly for the USO and sold war bonds. She still made movies, of course. In 1945, she raked in a staggering $300,000 for that year’s hit film Weekend at the Waldorf. 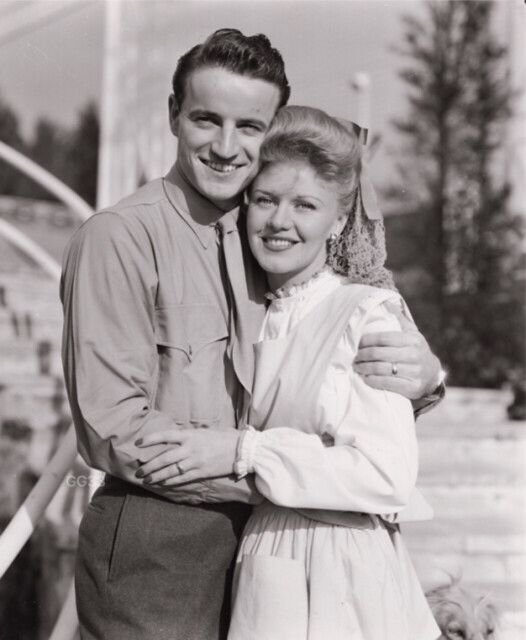 In 1943, she married the third of her five husbands, a United States Marine named Jack Briggs. Upon his return from the war he showed little interest in continuing his incipient Hollywood career and the couple divorced in 1949. As for Fred Astaire, he was always too old for war service and had children to support anyway, but that did not stop him touring relentlessly with the USO. He liked to dance in his army boots for the troops, at first at army bases around the United States, then later, beginning in August 1944, on an overseas tour. He performed a few shows in London, including one with members of Glenn Miller’s band, before heading off to France with crooner Bing Crosby. Fred’s relationship with Ginger was preserved for their movies. They were never close off-screen, leading separate lives throughout their careers, World War Two included, so they did not perform together with the USO. 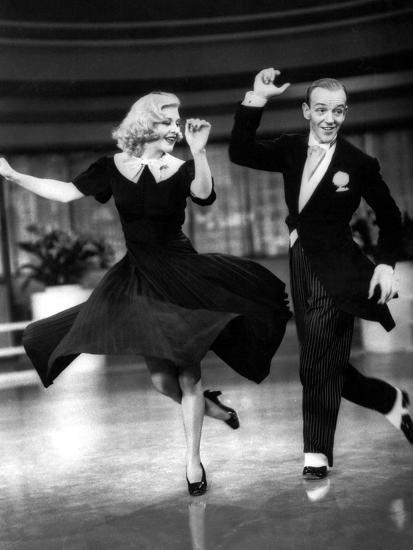 Ginger’s image featured on the bedroom wall of the ill-fated Anne Frank in the family home in Amsterdam. It was part of a gallery of magazine cuttings created by Anne and her sister Margot while they were hiding from the Nazis. Today, the girls’ gallery is preserved under glass in the house which has since become a museum. During the Burma campaign, there were reports that a British tank had gone into action with a five-foot cut-out portrait of Ginger wired to its front! Even as 1945 dawned, still prepared to do her bit for the war effort, she purchased a 1,000 acre ranch on the Rogue River in southern Oregon and built a modern dairy complex on the premises. For seven years, much of the milk gathered from her Guernsey cows went to Camp White, where almost 25,000 soldiers came and went throughout the war. In July 1994, the City of Independence, Missouri, designated the birthplace of Ginger Rogers a Historic Landmark Property. In one of her last public appearances, the eighty-three year old star of the screen attended the ‘Ginger Rogers’ Day’ celebration presented by the city. She even signed over 2,000 autographs. The following year she passed away from natural causes. Her remains were cremated and her ashes interred alongside those of her mother in Oakwood Memorial Park, Chatsworth, California. Fred Astaire is interred nearby.