Hollywood history is chock-full of stories about beautiful young women who arrive in the town from afar with stars in their eyes and high hopes of making it big in the movies. I don’t know what the percentages are regarding those who succeed and those who fall by the wayside, but it does not take a genius to suggest that those who don’t make it far outnumber those that do. Then there is a third category, one that embraces a growing number of beauties who seem to survive in Tinsel Town for decades simply as ‘celebrities’, ladies who are ‘seen’ at all the best spots in the company of male escorts, some of them movie stars, others merely fat cats with unlimited funds and possessed of a roving eye.

An example of this (picked entirely at random from scores, indeed hundreds, of similar histories) is a lovely native of Oklahoma with the unusual birth name of Cleatus Virginia Caldwell; a lady who arrived in this world in March 1923. She owed much of her beauty to her part-Cherokee bloodlines and moved with her folks to Huntington Park, Los Angeles just before her seventh birthday. As a teenager she was soon getting work as a photographer’s model and at 18 was dating radio host Ken Murray. Fans of the 1962 John Wayne movie The Man Who Shot Liberty Valance might recall the then elderly Murray playing the drunken, cigar-chewing Doc Willoughy in the picture. When asked by columnist Erskine Johnson in June 1941, if the rumours of his impending marriage to Miss Caldwell might be true, the ever publicity-minded Murray replied, ‘Listen, partner, do you think I’m crazy? With Hitler stealing the whole front page I’d be nuts to get engaged now. They’d bury the story in the want-ad section. I can wait.’ And he did – but only briefly. The 37 year-old publicity hound married teenager Cleatus in July 1941. Presumably, Hitler was enjoying a day off from the front page. The ceremony took place at Lew Ayres’ home in Hollywood, five days after Cleatus had graduated from high school. Bing Crosby sang solo, accompanied by Ayres on the organ and Edgar Bergen (Candice’s father) was Murray’s best man. Among the guests were Bob Hope, Jack Oakie, Johnny Mack Brown and Frances Langford. The bride and groom honeymooned at Lake Tahoe. A son was born to them in September ’42 and another arrived in March ’44. By September ’46, however, the marriage was officially over. In truth it had been on life support for over a year as both parties dated others. Murray would settle $3,100 a month on his ex-wife in alimony payments; a lot of money in post-war America. Cleatus had recently appeared in her first film Susie Steps Out (1946) and was already heavily involved with actor Robert Hutton, the cousin of Woolworth heiress Barbara Hutton. When quizzed on the seriousness of their relationship, Cleatus was quick to name her acting career as the top priority in her life. She was not interested in marrying again, she said, yet by early October the couple had become husband and wife.

Back in November ’45, she had been seeing quite a lot of big star Victor Mature, a man who never seemed to be without a screen beauty on his arm. He had recently broken up with his actress girlfriend June Haver. In January the following year Cleatus was seen at Slapsy Maxie’s with shoe tycoon and notorious skirt-chaser Harry Karl. He daily sent her expensive bouquets of roses until she suddenly ended their relationship. According to gossip columnist Louella Parsons, in March ’46, she was often seen out on the town with the much older George Raft. Louella was quick to note that George, ‘who usually goes for blondes’, seemed smitten. Cleatus was still officially married to Murray when columnist Harrison Carroll reported spotting her dating Robert Stack around this time.

In 1948, Cleatus made her second (and last) screen appearance, an uncredited role as an Indian girl in Two Guys from Texas. Despite parenting two children together, Robert Hutton and Cleatus separated in the fall of 1949 and divorced in November the following year. The union had lasted just four years. The former Mrs. Hutton complained of her husband’s extreme jealousy, citing it as the cause of the breakdown of their marriage, yet asked for no alimony to be settled on her. Long before their divorce became final both had been seeing others anyway. Hutton had been spotted wining and dining actress Ann Robinson (star of The War of the Worlds in 1953 opposite Gene Barry), while the well-informed Louella again reported that Cleatus was seen at the Mocambo in late ‘49 with producer William Dozier, and with songwriter Jimmy Van Heusen at nightspots in the Big Apple. 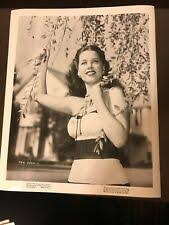 From 1950 until 1980, Cleatus enjoyed the life of a single, beautiful woman, splitting her time between Hollywood and New York. There was never a shortage of beaus to wine and dine her. Actor Brad Dexter dated her for a while. So did Eddie ‘Miami’ Sutherland, actor Walter Kane, Joe Kirkland Junior, Clyde Wall and even the perennial Harry Karl took her to the best places yet again. In 1980, she wed for the final time. The groom was 60 year-old James L. Caldwell and the bride was in her late fifties when they tied the knot in Santa Barbara. They were still together when Cleatus passed away in June 1993. Her screen career (hardly a career at all) consisted of just two brief appearances, neither noteworthy, yet her beauty and her penchant for being involved with wealthy, newsworthy suitors was enough to keep her in the public’s eye and in the newspapers all her life.

Her story is not an uncommon one in the movie business. Throughout Hollywood’s ‘Golden Age’ scores of pretty young women, many of them teenagers, disembarked at Californian railway stations week in and week out. Some of them, having submitted their photographs and resumes by mail, were there on account of some studio executives’ invitation to try their luck in the business. Others had caught the eye of studio talent scouts at beauty quests in obscure towns; others just simply took a chance on their beauty speaking for them. Many were naïve and easy pickings for the denizens who promised them whatever it took to get them into bed. Hopefully, the system has since changed, however marginally.