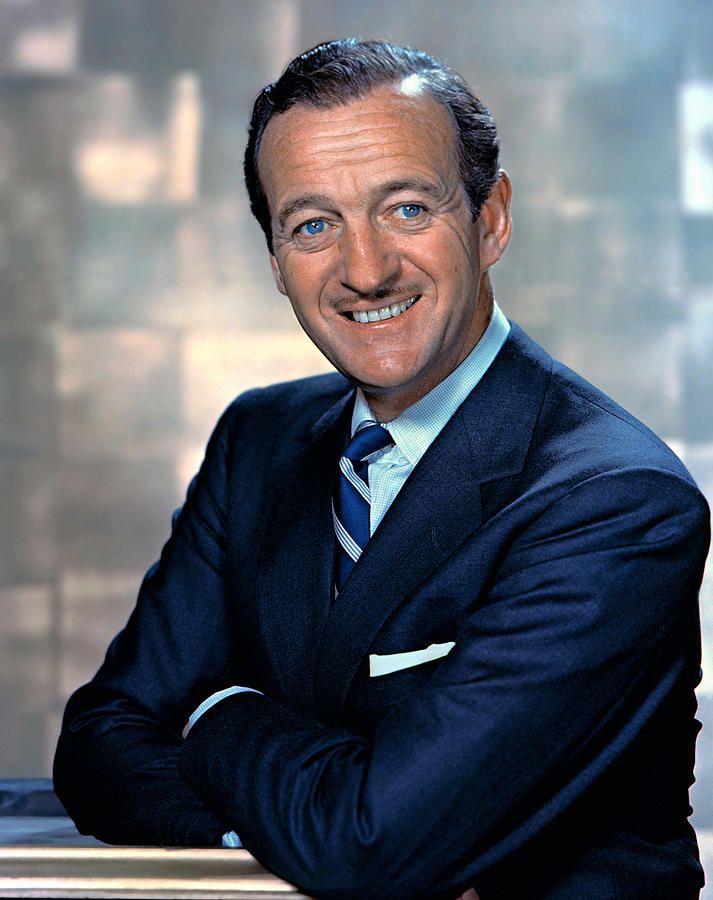 David Niven’s father died in action at Gallipoli, Turkey, at the age of 38, in 1915, during the First World War. He was listed as ‘missing’ until 1917. Young David would claim to have been born in Kirriemuir, Scotland, simply because he thought it sounded more romantic. In fact, his mother was in London seeing a specialist the day he entered this world in 1910. After being rejected by the Royal Navy because of his poor grasp of mathematics, the teenaged lad was admitted to the Royal Military Academy at Sandhurst. When asked to write down his three preferred regiments, he did so, but foolishly added a footnote that read: ‘Anything but the Highland Light Infantry (HLI).’ It was 1930. Someone with a mischievous sense of humor promptly commissioned him into the HLI as a second lieutenant. There he remained for three years, (two of which saw him stationed in Malta). Disillusioned with life in the peacetime army, he resigned his commission (via a telegram) in September 1933, and set sail for California and work in the movies. ‘Talking pictures’ had arrived in 1927 and studios were on the look-out for players with ‘voices’. 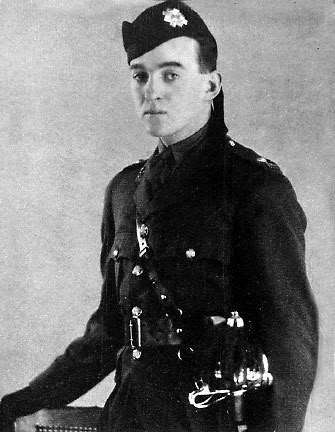 David’s screen career was progressing nicely when Britain declared war on Germany in September 1939. He wasted no time in returning home to Britain. Intending to enlist in the RAF, he was told that England already had more than enough young men training to be pilots. He enlisted instead in the Rifle Brigade and was duly recommissioned as a first lieutenant in February 1940. Early in the war, he befriended Clark Gable while the world’s #1 screen idol was serving in the USAAF in England. ‘The King’ would often stay at the Niven cottage with David, his wife and children. 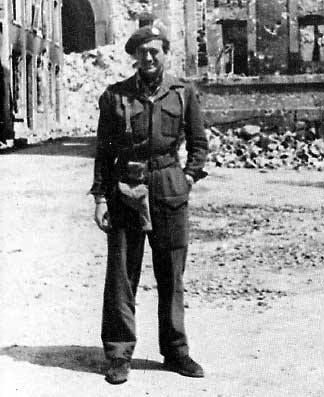 As a Commando in Normandy 1944

At first Niven worked with the Army Film and Photographic Unit (AFPU) and even had a small part in the deception plan that saw minor actor M.E. Clifton-James impersonate General Sir Bernard Montgomery for a few weeks. While with the AFPU, one of the script-writers, Private Peter Ustinov, posed as Niven’s batman. It was the only way that a private and a lieutenant-colonel could associate openly in the British Army. Occasionally, Niven was taken out of action to appear in propaganda films. The First of the Few (1942) and The Way Ahead (1944) were two such enterprises. Ustinov, too, appeared as a Frenchman in The Way Ahead.

David served through Dunkirk before joining the Commandos and later the secret Phantom Reconnaissance Regiment. This force operated behind German lines, participating in hit and run missions after the 1944 Normandy landings on D-Day. Despite his reputation as a raconteur, Niven refused to talk about his wartime experiences. ‘I will, however, tell you just one thing about the war’, he once conceded, ‘my first story and my last. I was asked by some American friends to search out the grave of their son near Bastogne. I found it where they told me I would, but it was among 27,000 others, and I told myself that here, Niven, were 27,000 reasons why you should keep your mouth shut after the war.’ He was actually involved in the 1944 Battle of the Bulge. In fact, he was once quizzed by an American sentry who thought he might be a German spy! When asked who had won the 1943 World Series, Niven replied, ‘I haven’t the foggiest idea, but I did co-star with Ginger Rogers in Bachelor Mother!’ 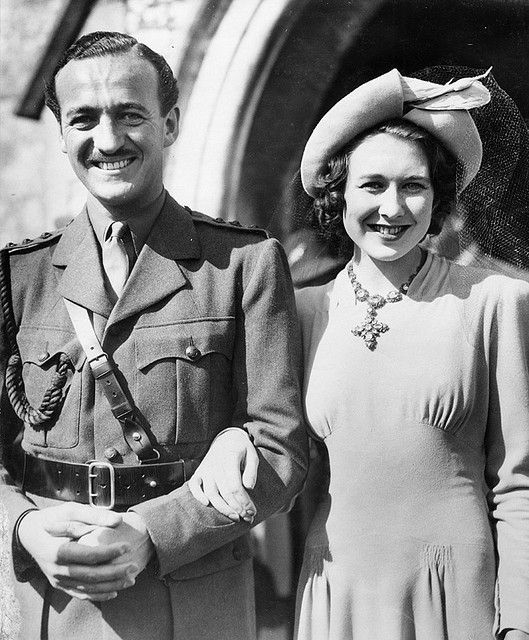 On his return to Hollywood at war’s end, he was awarded a Legion of Merit by General Dwight D. Eisenhower, for his work setting up the BBC Allied Expeditionary Forces Program, a radio news and entertainment station for the Allied forces. He often worked with the ill-fated Glenn Miller and his Army Air Force Band. It was around this time that Niven’s personal life was beset by great tragedy. While on leave in 1940, he had met and married a lovely young woman named Primmie Rollo. She presented him with two sons and their marriage was a happy one, until Primmie fatally fractured her skull, falling down some stairs while playing ‘hide and seek’ at the home of Tyrone Power in May 1946. She was only 28. Niven was devastated. He would wed again but his second marriage was decidedly unhappy. In 1980, he was diagnosed with amyotrophic lateral sclerosis (ALS). Although he would fight this terrible affliction for three years, it eventually claimed him in 1983. 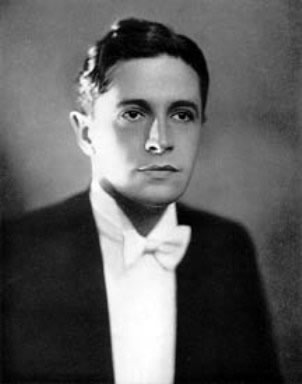 At the outset of World War One in 1914, Welshman Ivor Novello penned the wonderful song ‘Keep the Home Fires Burning’. It made him famous. In June 1916, he was told to report to the Royal Naval Air Service (RNAS) training depot as a probationary flight sub-lieutenant. Unfortunately, he twice crashed an airplane and was moved to an office job at the Air Ministry for the duration. He was far too old for service in the Second World War, yet an incident occurred that all but destroyed his career. There were serious rationing laws in Britain throughout the conflict, so when an admiring fan stole petrol (gas) coupons and gave them to him, Novello foolishly broke the law the moment he used them. Arrested and tried, he was sentenced to eight weeks in prison, but was released after serving just four of them. Even so, those four weeks of incarceration had a serious, lasting effect on him, both mentally and physically. Indeed, friends say he was never the same man again. Ivor passed away from a coronary thrombosis in 1951. He was only 58.

Merle Oberon was born in Bombay, India, not in Tasmania, Australia, as the world was led to believe for most of her life. Early publicity releases claimed she was Tasmanian, because an Australian background was deemed by her studio to be ‘classier’ than her true mixed-race origins. In truth, her father was Welsh, her mother an Indian from Ceylon (now Sri Lanka), and Merle entered this world as Estelle ‘Queenie’ Thompson in 1911. She became a feature of Bombay nightlife while still in her teens, before eventually making her way to Britain as the seventeen year-old girlfriend of a wealthy young Englishman. By the early thirties she was a star at the famous Café de Paris, where she became intimately involved with the rather notorious Grenada-born jazz musician Leslie ‘Hutch’ Hutchinson. 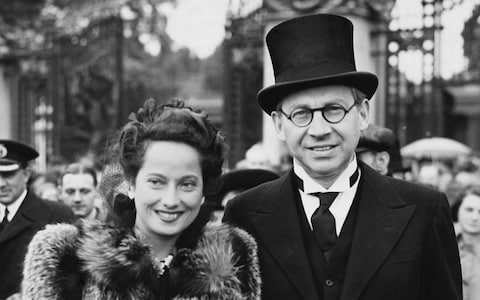 She was known as Queenie Thompson until Hungarian-born Alexander Korda changed her name to Merle Oberon in 1933 and cast her as Anne Boleyn in his The Private Life of Henry VIII (1933). He married her in 1939, Merle eventually becoming the first Lady Korda after he was knighted. Before that, however, a London car crash in 1937 left Merle with facial scars that threatened her screen career until another future husband, cinematographer Lucien Ballard, created a compact spotlight, one that reduced the incidence of unflattering facial lines and shadows. He called it an ‘Obie’ in her honor. Merle had always been plagued by extremely sensitive skin anyway, and would experience cosmetic poisoning twice during her career. Her marriage to Korda ended after six years in 1945, and she wed Ballard that same year. That particular union would last four years.

After actress Carole Lombard’s tragic death in a plane crash early in ‘42, just a month after Pearl Harbor, one of the first stars to sell war bonds was her close friend Merle. On February 5, 1942, the New York Stock Exchange opened its doors to her, the first time a woman had ever been allowed on the floor of the exchange before 3 pm. She spent several hours there raising money for the Navy Relief Show that was to be staged at Madison Square Garden. Twelve days later she participated in a new fund-raising gimmick, the selling of posters bearing the message: ‘Loose Talk Can Cost Lives’.

At the height of the Battle of Britain, she and Korda, returned to America. They were roundly vilified by the UK press for doing so. Merle claimed years later that her husband was part of the ‘Intrepid Operation’ and had been ordered by Prime Minister Churchill to go to the USA and assess the American attitude toward Britain and the war, and to do his utmost to influence that attitude with pro-British films. Unfortunately, the British Official Secrets Act is likely to prevent us ever being able to confirm or deny this. 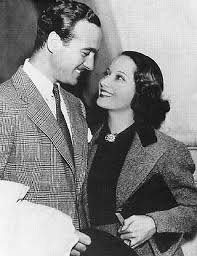 One of the most poignant love stories of the entire war concerned Merle and a young RAF pilot named Richard Hillary. In 1941, she was introduced to Richard who had been horrendously disfigured when his Spitfire was shot down in flames over the North Sea. His face was burned beyond recognition and, even after undergoing extensive plastic surgery, people in the street would often turn away from him. But not Merle. She was made of sterner stuff. Her secretary recounted: ‘Merle told me she knew he was very much a man still, and she had such a great good heart, that she could breathe her power, her strength into him. It was a beautiful, beautiful thing for her to do.’ Merle cleared her calendar, even of war work, and devoted her time to Richard. In an apartment in the Ritz Towers she restored his virility. His biographer later wrote that, ‘their affair was not heavy…it was light-hearted, cheerful.’ Despite his injuries, however, Richard desperately wanted to resume combat flying and eventually, after special training for the injured, was granted permission to do so. Merle had just begun shooting First Comes Courage (1943) when she was informed that he had died in another crash. Stunned, she quit working for several days and remained in seclusion. Most of that time she was hysterical. A few years later, her letters from Richard were destroyed in a fire at her home.

For years Merle did her best to hide her origins from the press and her fans. She would tell friends that the elderly Sri Lankan lady living in her house was her maid. Her mother passed away in 1937. Twelve years later, Merle commissioned a painting of her from an old photograph, instructing the artist to be sure to lighten her complexion, to hide the fact that she was part-Indian. Merle suffered a stroke and passed away in 1979 at the age of sixty-nine.