In October 1942, the War Department organized its second entertainment troupe to go abroad, a tour that was intended to last for approximately five weeks. Carole Landis, comedienne Martha Raye, veteran actress Kay Francis and little known dancer Mitzi Mayfair volunteered. The tour would actually see them away from home for five months, performing in Britain and in North Africa. Carole would write a best-selling book about their experiences over those months titled Four Jills in a Jeep, and a 1944 movie of the same name would be made starring all four ladies. 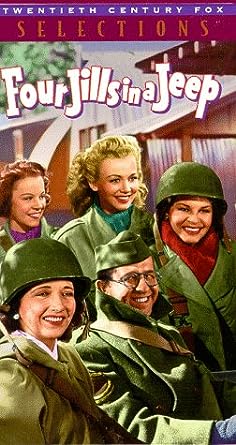 During the tour Carole met and fell in love with Captain Tommy Wallace from Pasadena, California while the troupe was in Britain and, in January 1943, he became the fourth of her five husbands. They only had a two-night honeymoon before the troupe had to fly to North Africa.  Unfortunately, husband and wife rarely saw each other because of the war and would divorce in July ’45. On-stage, Carole knew precisely how to play up to the love-starved servicemen in the audiences. Groucho Marx was in the audience and saw her perform in a USO show in San Diego. ‘When she came out on stage in that white sheath dinner dress,’ he said, ‘there was probably the greatest exhibition of mental masturbation in the history of the military.’ 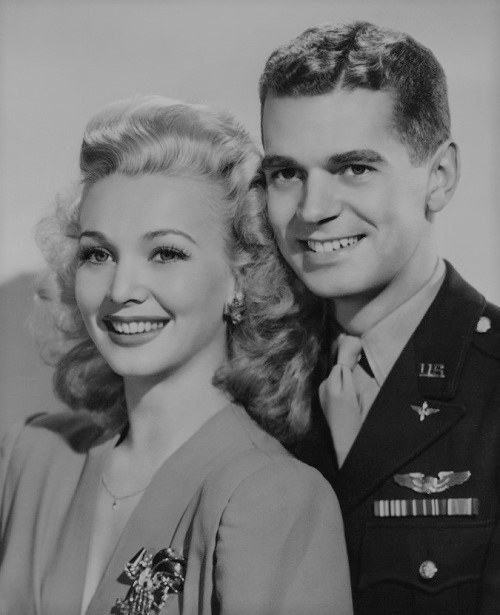 It is not often spoken of, but the lovely Carole selflessly spent more time entertaining US troops during World War Two than any other Hollywood celebrity. Two years after the ‘Jills’ tour, she joined comedian Jack Benny and went off to entertain troops in the South Pacific. Whilst traveling over 100,000 miles throughout the war zone in noisy, cold and uncomfortable transports and cargo planes, the uncomplaining actress/singer was in constant danger of air attack from enemy fighters. On top of extreme fatigue bordering on exhaustion, she contracted malaria and dysentery along the way before finally making it home. America and the USO were indeed fortunate to be blessed with the tireless services of such women throughout the conflict. Dinah Shore, Frances Langford, Marlene Dietrich and Carole did far more than their fair share and deserved considerably more acknowledgement than they ever received. Sadly, Carole’s life ended far too soon when she took her own life at the age of just 29 in 1948. She was one of Hollywood’s saddest stories. 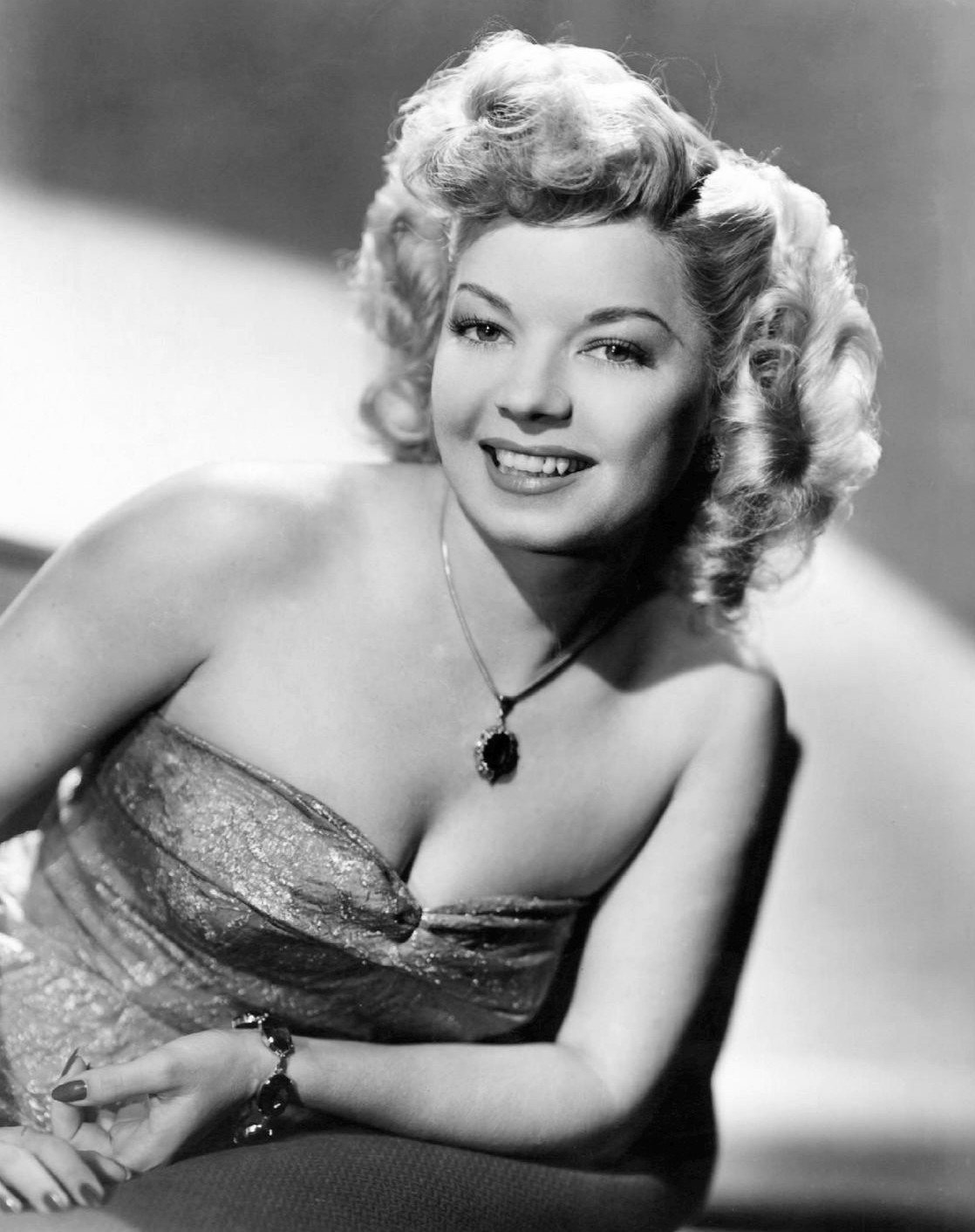 Frances accompanied Bob Hope on his USO tours during the Second World War and later in the Korean War. In fact, she was still touring with him in 1989, entertaining troops in the Persian Gulf. Her steamy rendition of ‘I’m in the Mood for Love’ became her trademark whenever she performed in front of servicemen in WW2. On occasion Frances found herself in dangerous situations. During one USO tour she was forced to leap from the jeep in which she and Hope were riding when it was strafed by a German fighter plane. She landed on top of Bob in a culvert. On another occasion the two entertainers spent the night in the basement of an Algiers hotel as bombs burst above them. 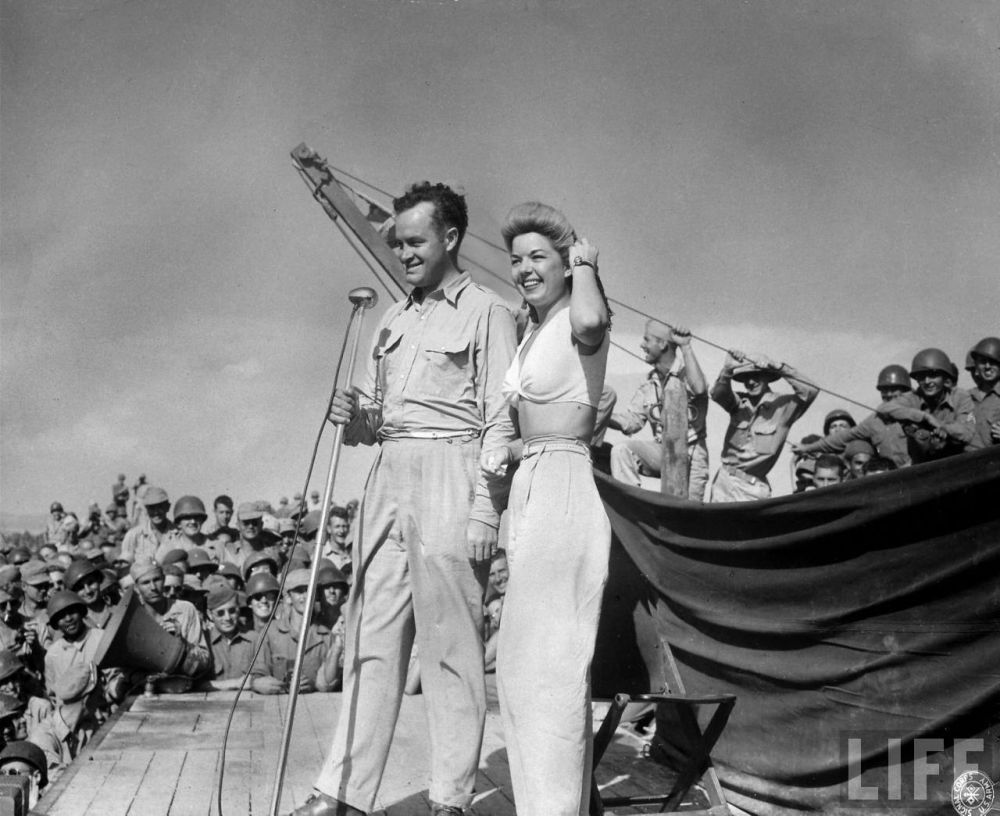 While in the South Pacific, she was invited to take a joyride in the back seat of a US Army P-38 fighter. Whilst over a Japanese island, however, the pilot spotted an enemy cargo ship and dived to strafe it, while a terrified Frances had a back seat view of the proceedings. She also wrote a weekly column throughout the war for Hearst Newspapers titled, ‘Purple Heart Diary’, in which she described her USO visits to wounded soldiers in hospitals in the USA and overseas. Her column became a ‘voice’ for the soldiers, airing their gripes and feelings, while making their needs and requirements publicly known. ‘Entertaining the troops was the greatest thing in my life’, confided the lady known as ‘The Sweetheart of the Fighting Fronts’ in her final years. ‘We were there just to do our job, to help make them laugh and be happy if they could’, she said. A great lover of fishing, she spent her final years on her estate in Florida before dying from congestive heart failure at 82 in 2005. 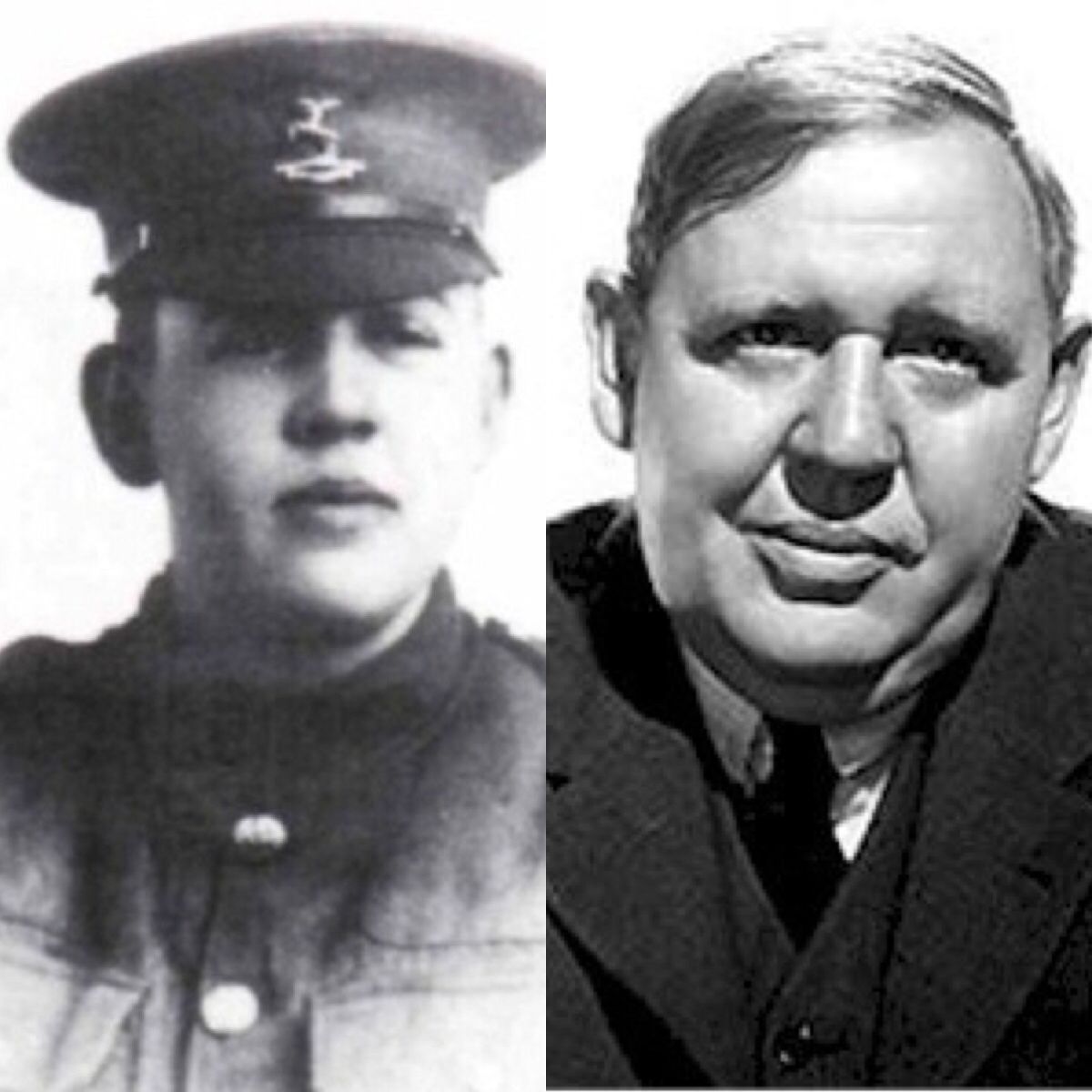 The English actor once sold $500,000 worth of war bonds simply by reading the Bill of Rights on Wall Street! Prior to the commencement of hostilities he and ex-patriot German film producer Erich Pommer founded the production company Mayflower Pictures in the UK. They made three features, none of which were commercially successful, and the company was briefly saved from bankruptcy when RKO offered Laughton the title role in The Hunchback of Notre Dame (1939), but then World War Two intervened and the company folded.

He was too old for active service, although he had served in the First World War as a private in the British Army. Despite undergoing officer training in Stonyhurst College he opted to serve as a ranker with the Huntingdonshire Cyclist Regiment in 1917, and later with the 7th Battalion Northamptonshire Regiment on the Western Front. Shortly before the Armistice he became a casualty to mustard gas. In 1962, Laughton was diagnosed with cancer of the gall bladder, and over the final eleven months of his life, his weight plummeted to just 90 lbs. He died that same year.

Lawford was born in London, England, the son of a World War One hero. As a boy growing up in France, he had a horrendous accident when he crashed through a glass door at a hotel and almost severed his right arm. The doctor was fearful of gangrene setting in and wanted to amputate, but the boy’s mother insisted he try to save the arm with surgery, which he duly did. Lawford’s withered arm ensured he would be classified as 4-F for the draft, and that placed him in a bind. He hated being considered a ‘shirker’, but doubted his acting career could survive if fans knew he had a deformed arm. He would work hard from that time onwards to disguise his condition during his time in the limelight.

The Lawfords were in Florida when the war broke out and found themselves stranded in the USA, their money and assets frozen back in Britain. The advent of the war also saw an influx of British war stories that required actors with British accents. It was a case of being in the right place at the right time and Peter began getting small, uncredited roles in a few of them. He can even be glimpsed in Mrs. Miniver (1942). There were so many leading men away at war that, before long, the name Peter Lawford began heading cast lists. The war and his childhood injury combined to give him a career he might never have had. Years of substance abuse took a heavy toll on his liver and kidneys as he grew older, however, and on Christmas Eve 1984, he passed away at the age of 61.